Silver bar recovered from the 1622 shipwreck of the Atocha off the Florida Keys, 1045ozt, sold for $36,600. Milestone Auctions image

“This auction generated lots of excitement, with bidders from around the world taking part,” said Milestone Auctions co-owner Chris Sammet. “We had a very large in-house crowd plus many Internet and phone bidders. There were some items that we expected would draw a lot of interest, but in the run-up to the sale there were phone calls and emails about almost everything in the catalog.” Absentee and Internet bidding was available through LiveAuctioneers.

The grand total for the day was $365,010 (all prices quoted inclusive of 20 percent buyer’s premium). To no one’s surprise, the top lot was a 1045ozt silver bar recovered from the shipwrecked Nuestra Senora de Atocha, the most famous of a fleet of Spanish ships that sank in 1622 off the Florida Keys. One of the larger bars recovered from the Atocha in 1985, it bore all of the appropriate cartouches and markings, plus an assayer’s bite. A remarkable survivor from the most valuable shipwreck ever found, it sold near the midpoint of its estimate for $36,600.

A 1907 Swiss-patented automaton with intricate movements replicating a bowling game created quite a stir on both sides of the Atlantic. The machine depicts two men – one of them poised to roll one of several steel bowling balls down a lane toward skittle pins while the other sits on a barrel “smoking” his pipe. During the action, a third figure emerges to reset the pins and return balls to the bowler. Bidding on the automaton was brisk, quickly surpassing the $10,000-$20,000 estimate to land at $23,400. “We’ve already shipped it to its new owner – a museum in Denmark,” said Sammet. 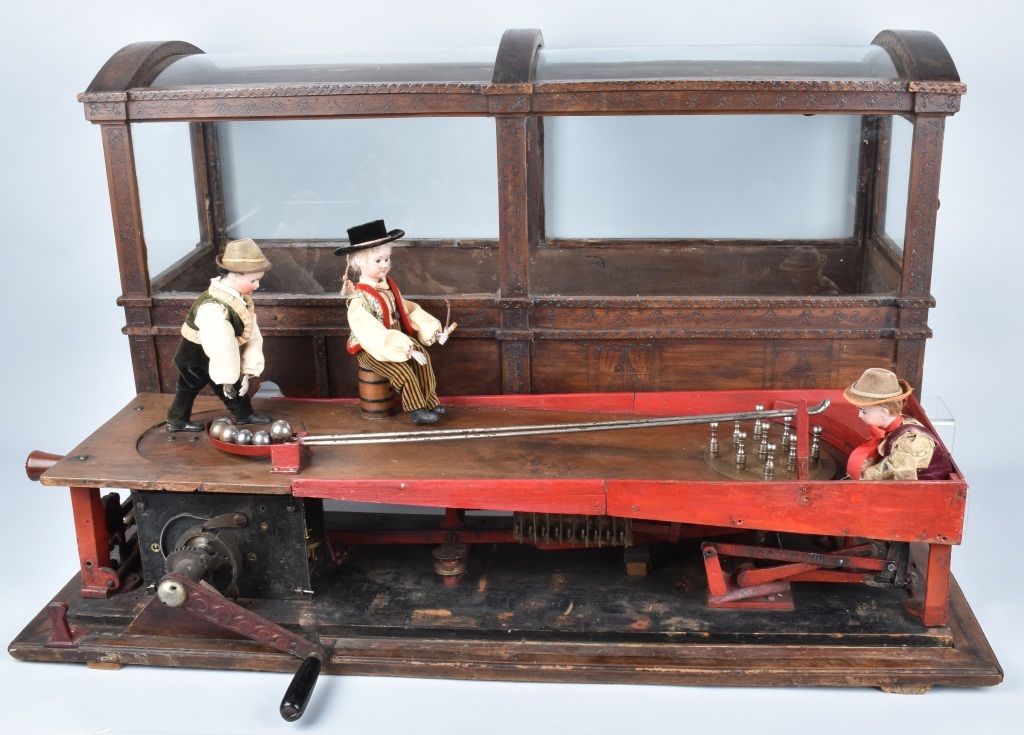 Vintage Louis Vuitton luggage is never short on suitors, but three LV suitcases offered by Milestone had special cachet going for them. The bags had been the personal property of World War II hero Gen. Douglas MacArthur, Louis Vuitton buyers had to face additional competition from military and celebrity memorabilia collectors. Each suitcase was personalized with yellow and green stripes and the monogrammed initials “MacA” beside the handles. The LV trio, together with MacArthur’s shotgun case with engraved brass tag, sold in total for $20,100. Unrelated to the MacArthur grouping, a 1920s Louis Vuitton secretary linen trunk, brown leather with a pullout desk, was bid to $15,600. 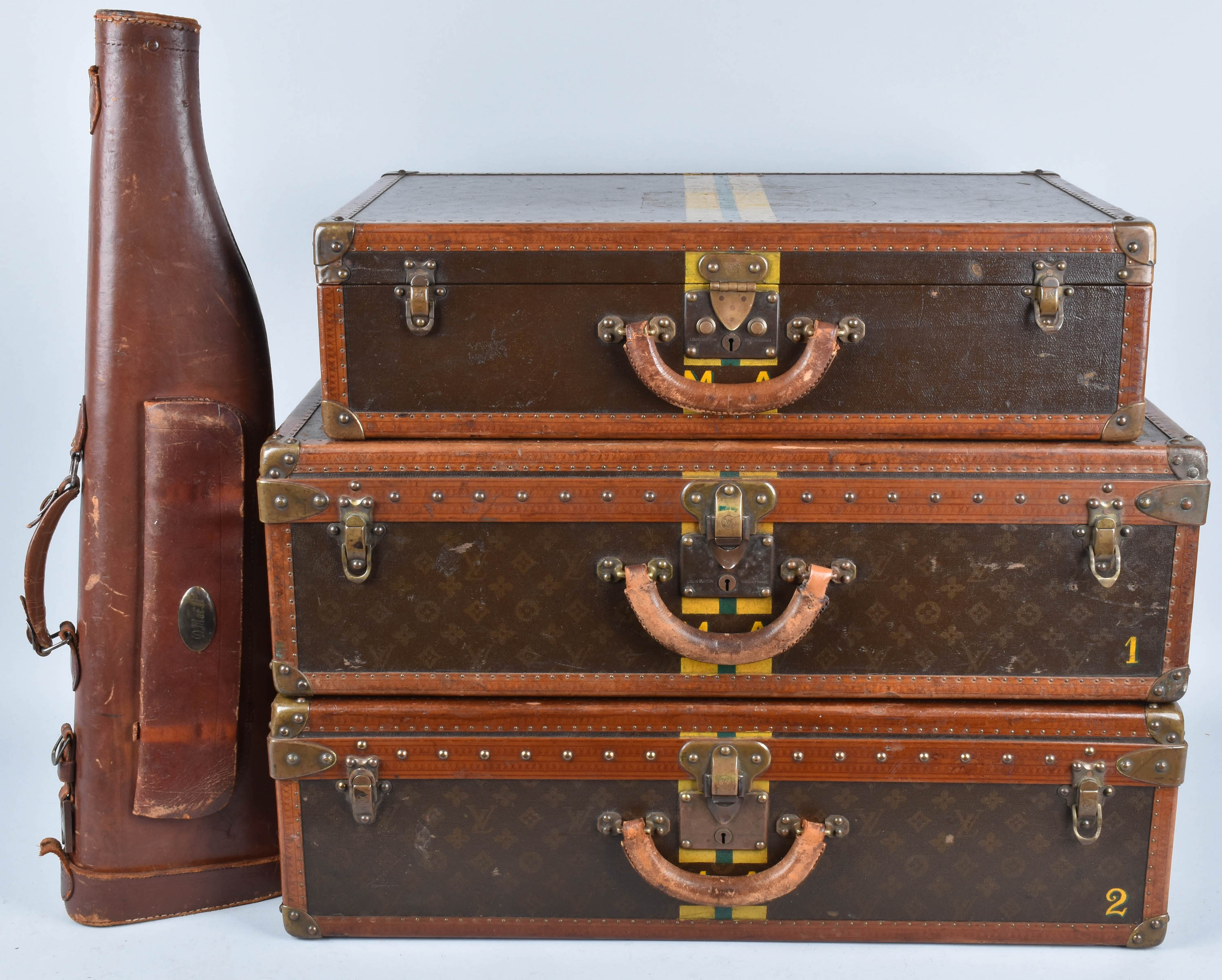 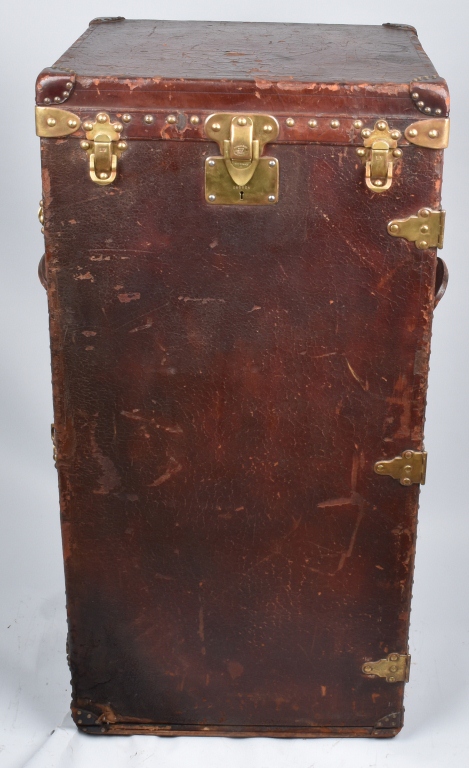 Antique advertising was one of the sale’s strongest categories. An excellent, original Abner Zook (Pennsylvania, 1921-2010) bas-relief sculpture painting of a hay-baling scene boasted beautiful fall colors and an impressive size of 32 by 18 inches. The busy landscape depicted Amish farmers at work, one of them commandeering a four-horse bailer clearly emblazoned with the manufacturer’s name: McCormick-Deering. It sold for an above-estimate $6,000. 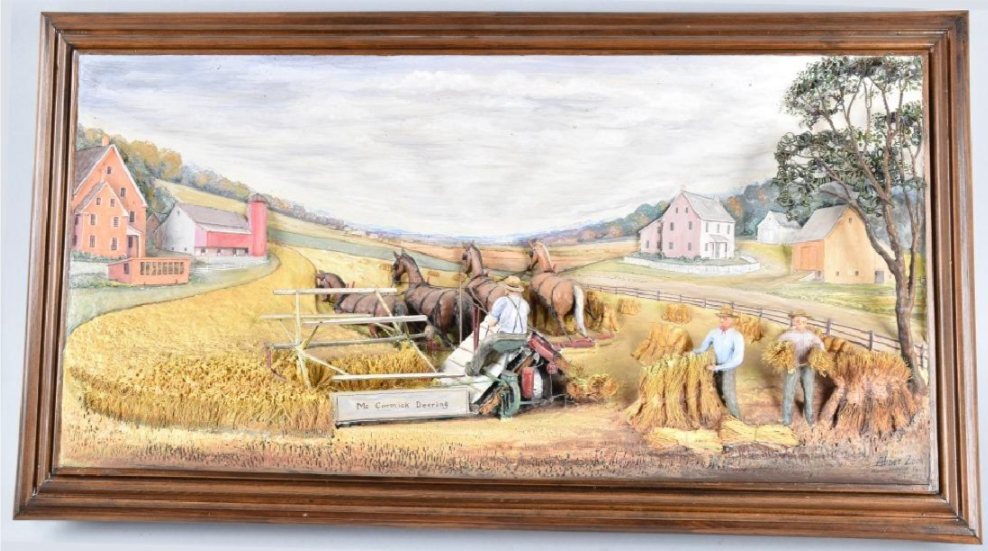 A 60-inch-long canvas advertisement for Buffalo Bill’s Wild West Congress was hand-painted with images of the showman as well as legendary sharpshooter Annie Oakley. Opening at $1,000, it rose to $5,640, above the midpoint of its estimate range. 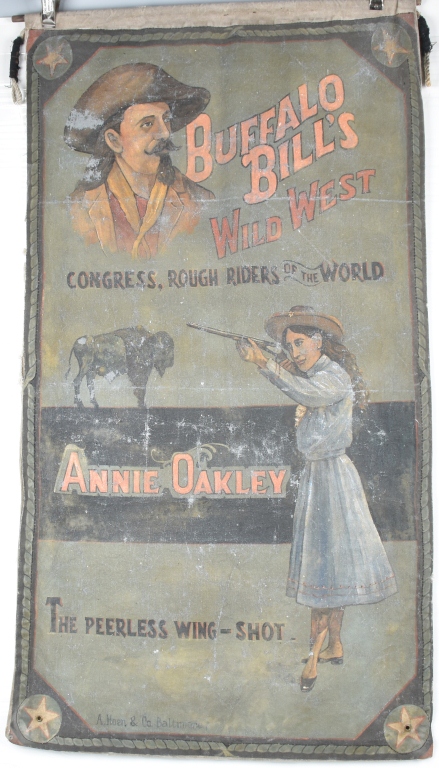 Combining entertainment and visual beauty, an ornate Kalliope disc music box with marble top was designed to operate on 5-pfennig coins. Embellished with many decorative elements on its nicely patinated wood case, the machine performed beyond expectations, taking a bow at $4,440. 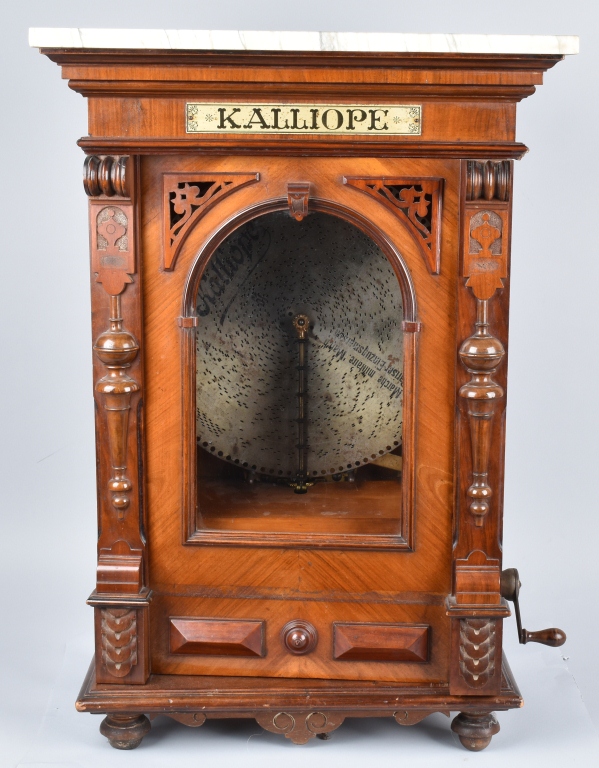 A fine piece of Americana with crossover interest to collectors of early movie-related memorabilia, a circa-1912 Keystone Cop papier-mache parade mask displayed appealing colors and amazing condition for its age. The whimsical reminder of Hollywood’s silent-film era flew past its $300-$600 estimate to close at $1,800. 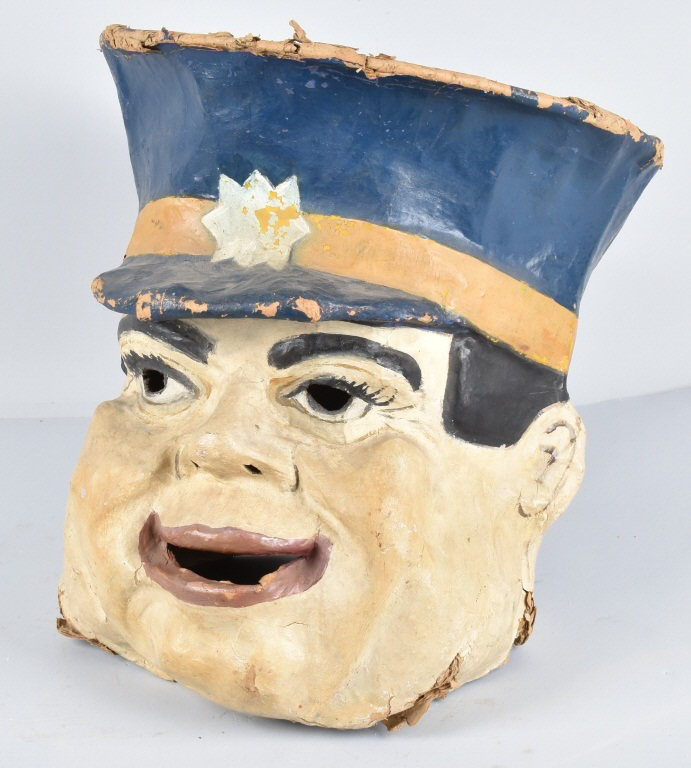 The auction held many sweet surprises for collectors of soda pop and soda fountain antiques. Topping the sizable list of Coca-Cola pieces was a very rare and desirable 1920s stained and leaded-glass hanging lamp. A beautiful production with richly hued glass panels, its fine condition helped boost its final selling price to $3,000. 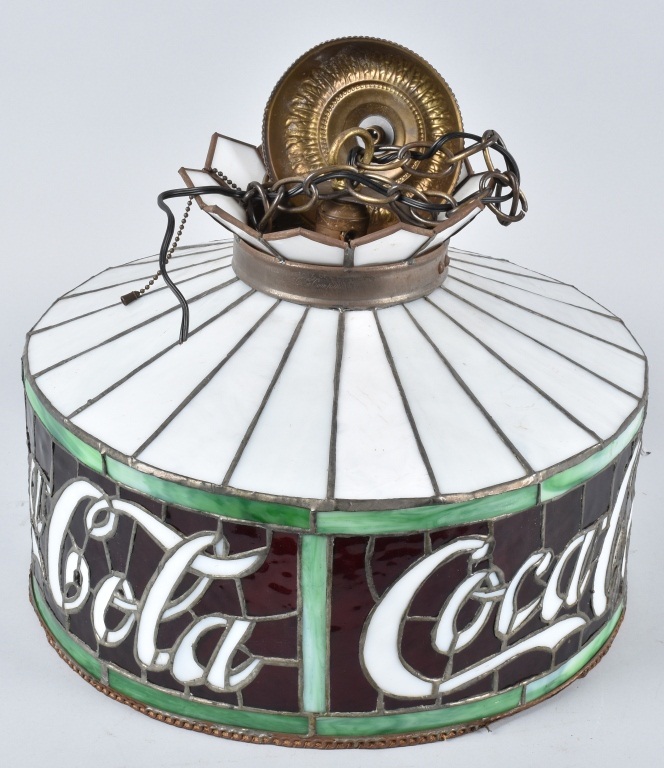 Three Ward’s syrup dispensers were bright additions to the sale. Advertising the company’s Orange, Lemon and Lime-Crush products, respectively, all three sold well above estimate, with the Lime-Crush example achieving $2,040. 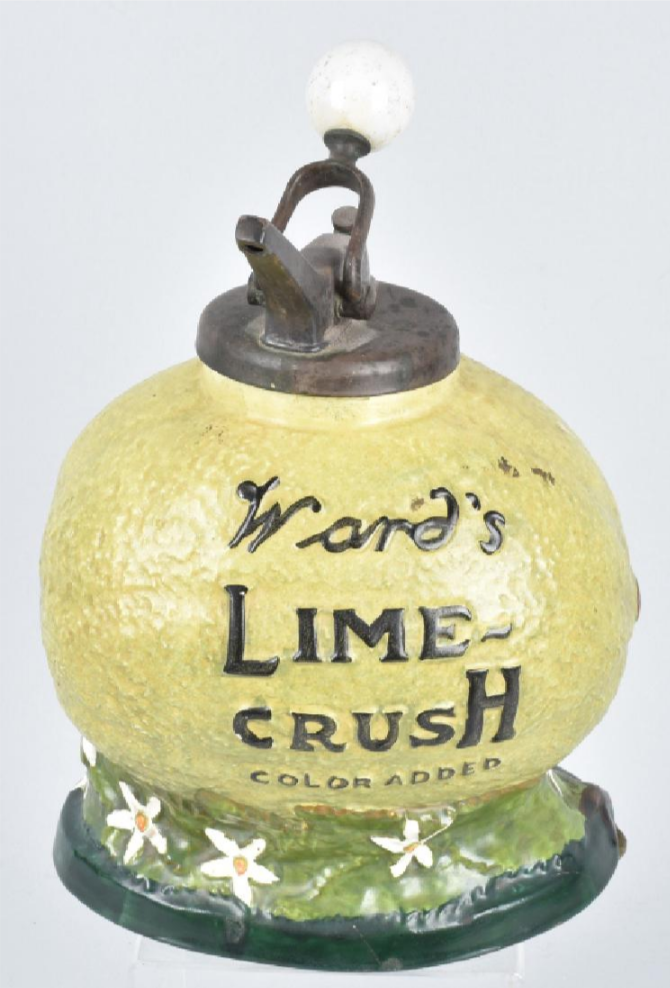 To contact Milestone Auctions about consigning to a future sale, call 440-527-8060 or email info@milestoneauctions.com. View the fully illustrated catalog for the Jan. 14, 2017 auction, complete with prices realized, at LiveAuctioneers.com.