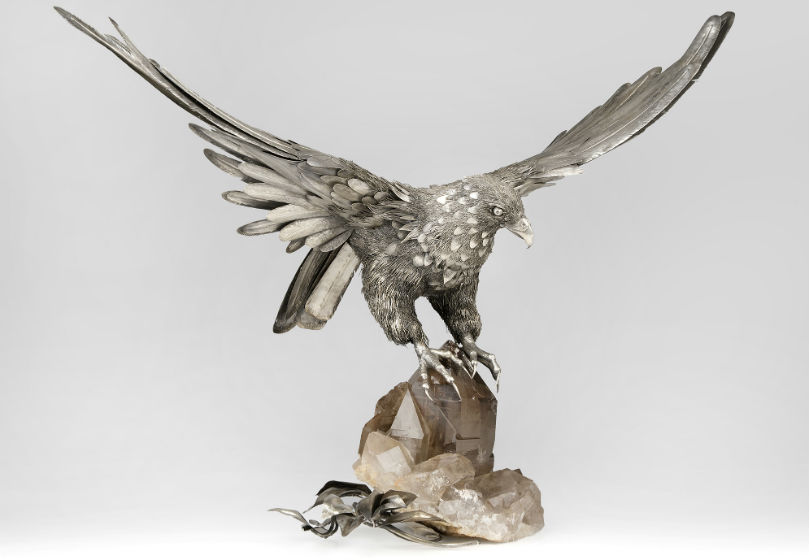 MONROVIA, Calif. – In a slimmed-down affair, John Moran Auctioneers’ Traditional Collector sale June 20 consisted of only 229 lots of French furniture, European silver, porcelain, paintings, and clocks. While results were mixed overall, it seemed buyers were keen to put most of their purchasing power toward relatively safe investments, such as silver by various worldwide makers, as well as various objects by well-known makers such as Steinway, KPM and Daum. Absentee and Internet live bidding was available through LiveAuctioneers.

Top-lot status went to a 1947 Steinway & Sons Model D grand piano, one of two pianos consigned to Moran’s from the Estate of Albert Jamaitis, a concert and jazz pianist, studio musician, and educator at LA City College. Expected to bring $20,000 to $30,000, the piano (below) inspired a number of buyers to come view and play the instrument before bidding. Bidders must have been wooed, because the model D achieved $22,500 including buyer’s premium. Later a Model A from the above-named estate dating to 1889 sold to a collector for $7,200 (estimate: $4,000-$6,000). 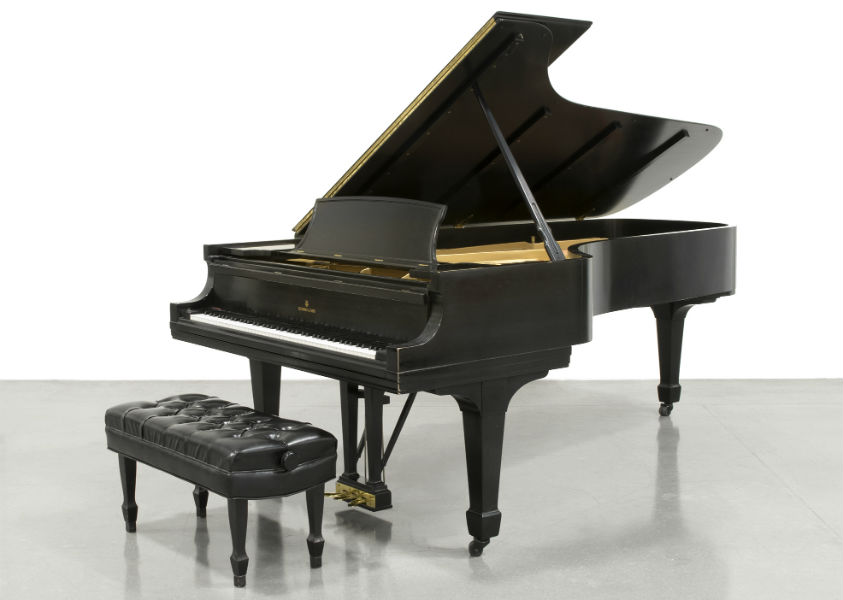 One of two Steinway & Sons pianos consigned from the Estate of Albert Jamaitis, this Model D grand piano sold within estimate at $22,500. John Moran Auctioneers image

Silver lots did well throughout the sale, and success was found not only among English and American makers, which comprised the majority of silver offerings by percentage, but also by lots of Italian and Mexican makers in particular. Most notably, a nearly life-size Buccellati eagle (top), finely modeled in .800 silver and perched on a naturalistic crystal base, was expected to find a buyer for between $6,000 and $9,000. Bidding topped out at an astounding $19,200, thanks to interest from two dueling floor bidders.

Select European paintings exceeded expectations, including a lovely oil painting of a figure fishing near a small waterfall by 19th century British artist John Brandon Smith (1848-1884). Assigned a $1,200 to $1,800 estimate, the painting achieved $3,750. 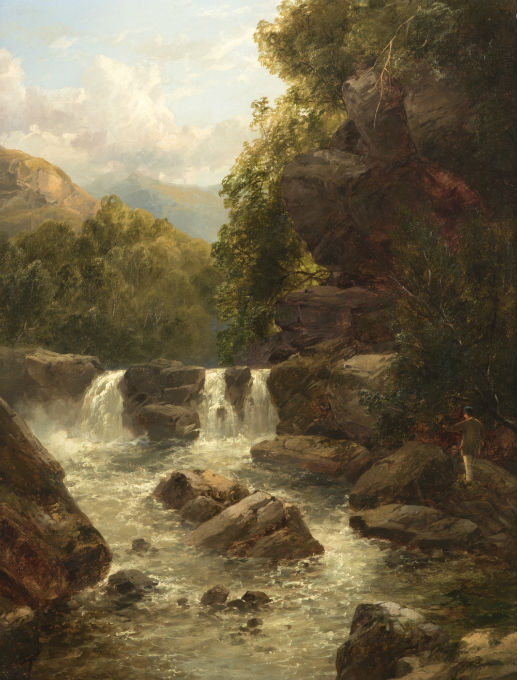 Later in the evening an unsigned but highly detailed and complexly composed mythological scene in oil was offered with a conservative $600 to $900 estimate. Competing floor buyers brought the final selling price up to $2,040. 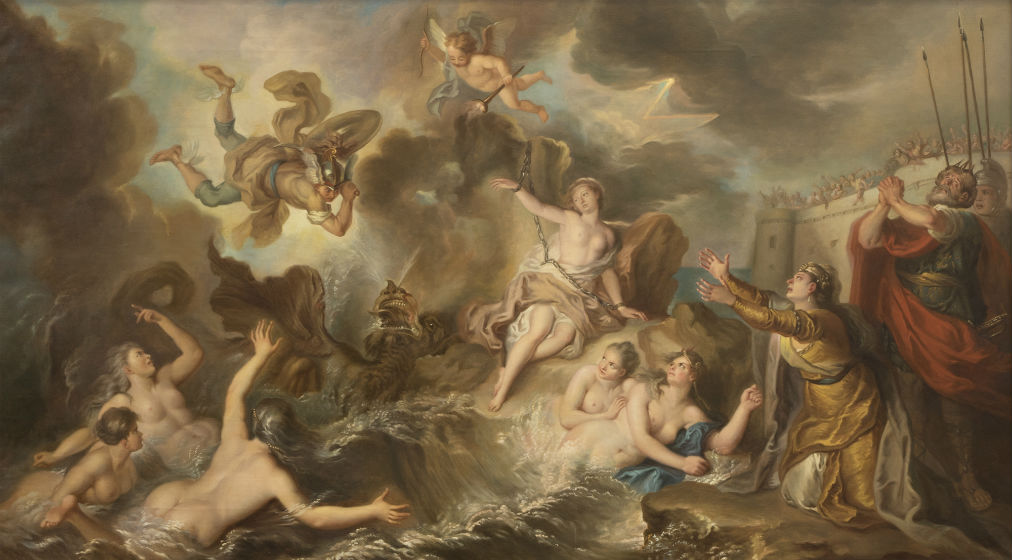 A classic KPM porcelain plaque depicting a young beauty in an orientalist costume found competing bidders participating by phone and in the room. Estimated to bring $800 to $1,200, the plaque achieved $1,920. 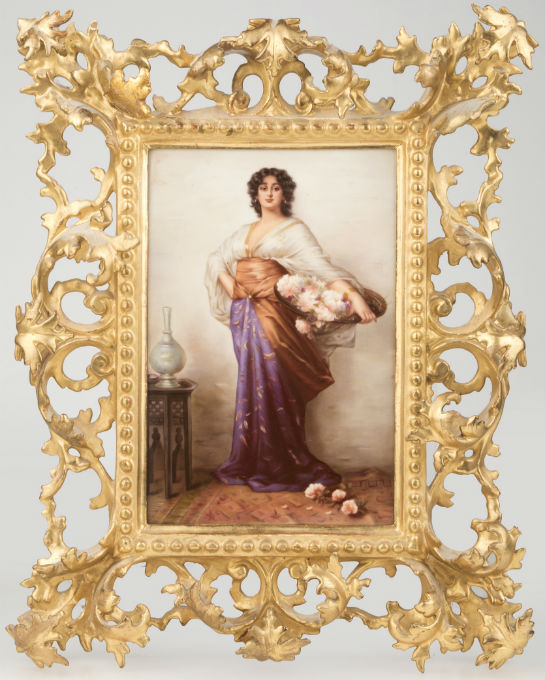 One of a number of fine examples of European art glass offered throughout the June catalog, a Daum pâte de verre Amaryllis Magnum vase in ombré blue and green achieved $5,313, square within the $4,000 to $6,000 estimate. 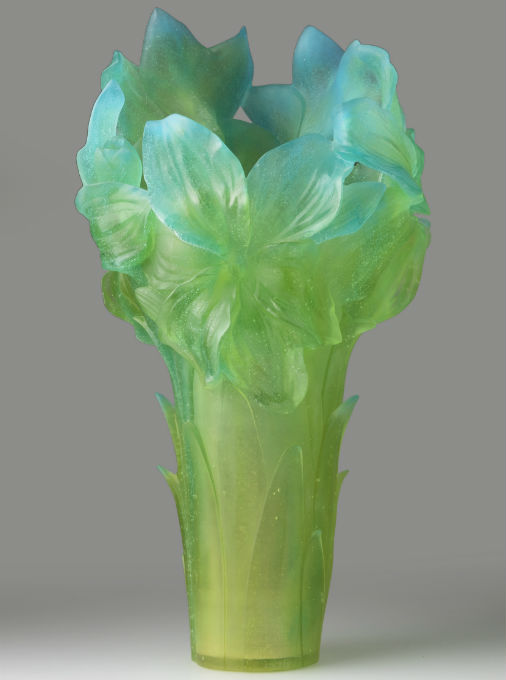 For more information contact John Moran Auctioneers at 626-793-1833 or info@johnmoran.com.