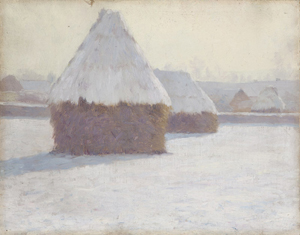 Attracted by an exceptionally and consistently strong selection of works by top-tier artists, including two works by top California Impressionist Guy Rose, bidders from all over California filled the saleroom at the Pasadena Convention Center to capacity. A number of works sold above their high estimates, and several artists’ world records were broken within the span of an hour.

The first work by Guy Rose (1867-1925) to go on the block was Windswept Trees, Laguna, aptly described in a note in Moran’s catalog by well-known California art expert Will South as “by every measure, a signature example of his mature aesthetic, an aesthetic that defines the highest cultural achievement of his time and place.’’ Rose painted the 40-by-30-inch oil-on-linen “en plein air” in 1917, and was so pleased with the result that he kept it in his private collection, and reproduced it in a larger studio version which now belongs to the Irvine Museum. Purchased from Stendahl Galleries at the Guy Rose Memorial Exhibition by members of the same family who consigned it to Moran’s, this important work made its reappearance on the market with aplomb, realizing $480,000 (estimate: $500,000 – $700,000).

The second work by Rose, Winter Haystacks at Crecy-en-Brie, France, was painted earlier, in 1890, when Rose was a student in Paris. Possessing an authority and presence that belies its diminutive size, the delicately shaded oil was purchased by a determined floor bidder for a final price of $120,000 (estimate: $100,000 – $150,000). Two more works by Guy Rose are slated for sale at John Moran Auctioneers’ October California and American Fine Art Auction.

One of the standout record-breaking paintings was a large and unusually dramatic oil by Paul Grimm (1891-1974), California Clouds. Hailing from a private Orange County collection, the canvas went up on the block with a conservative estimate of $7,000 – $9,000. Competing floor and a full bank of telephone bidders quickly drove the asking price much higher, however, to a final bid of $30,000.

Sweeping Southern California landscapes in general performed quite well at Moran’s. A bidding war broke out for a massive canvas (40 inches by 60 inches) by Hanson Duval Puthuff (1875-1972) depicting a wide view of Big Tujunga Canyon (estimate: $60,000 – $80,000). Puthuff’s impressive work renders the California scenery in true-to-life hues of yellow, brown and green, skillfully capturing the arid-meets-verdant landscape. Bidding did not top out until the price reached the $96,000 mark. John Frost’s (1890-1937) electrically colored oil on canvas, San Jacinto, Palm Springs, executed in a feathery, painterly hand, earned an impressive $85,750, well over the expected $50,000 – $70,000.

The Beautiful Bay of Avalon by Joe Duncan Gleason (1881-1959) also performed beyond expectations. The work serves as a fascinating architectural and geographical record of the popular resort town on Catalina Island. Painted from a similar vantage point as the current record-holder for the artist, a larger work that Moran’s sold for $161,000 in February, 2007, it takes its title from a poem by Jennie L.H. Giddings, whose family home, Holly Hill House, is the structure on the right of the canvas, facing the Sugar Loaf Casino on the other side of the bay. Gleason created the painting as a gift to the family upon their purchase of the property, and it remained in the family until the present day. Expected to bring $20,000 – $25,000, the modestly sized painting realized $36,000.

Some new records were set by stunning works by lesser-known but immensely talented California artists. A muted oil by Ted Christensen (1911-1998) titled Tiburon captures the hamlet on a foggy day, showing a road winding down through buildings to the distant bay covered in haze. Bidders responded enthusiastically to the sketchy, almost abstract, scene, bidding well beyond the estimate of $1,000 – $1,500, to a purchase price of $4,287.50. Shortly thereafter, a sunny watercolor by Sacramento artist John Britton Matthew (1896-1980), Divers Cove, Laguna Beach – From Life, broke the artist’s record with a selling price of $3,900, well over the estimated $1,000 – $1,500.

Other results of note include George K. Brandriff’s (1890-1936) A Gathering Storm, Mono Lake, Calif., which was expected to find a buyer for $2,000 – $3,000, but earned an impressive $6,000 in the end. Late Afternoon – La Crescenta by Los Angeles artist Walter Farrington Moses (1874-1947), a skillfully composed composition depicting distant mountains revealed by a divided clutch of stately eucalyptus trees to the mid ground, was initially estimated to earn $800-$1,200. Wooing bidders with a cool and calming palette replete with purples, blues and greens, the piece fetched $4,200. A bright and bold composition by John Wesley Cotton (1868-1931), titled Gnarled Veterans in reference to the massive sycamore trees that serve as the painting’s subject, incited a number of bidders to compete for ownership. In the end, the work realized $8,400 (estimate: $3,000 – $5,000).

– Massachusetts artist John Whorf’s oil on canvas, Southern Cruiser, is a stunningly dramatic maritime nocturne, looking over the bow of a ship and beyond to a view of crushing waves. Perhaps made all the more captivating with the inclusion of a solitary figure on deck, illuminated by an interior light, the work earned $30,000 (estimate $15,000 – $20,000).

– A pair of complementary works by Pasadena artist Marion Kavanagh Wachtel, initially given a conservative $1,500 – $2,000 estimate for the pair, sold at $6,000.

– A charming, feathery still life of lilacs by Clair H. Ruby made quite an impression when auction attendees viewed it in person, inciting a number of bidders to leave absentee bids. One such absentee bidder was indeed successful, buying the work for $2,400 (estimate: $1,000 – $1,500). 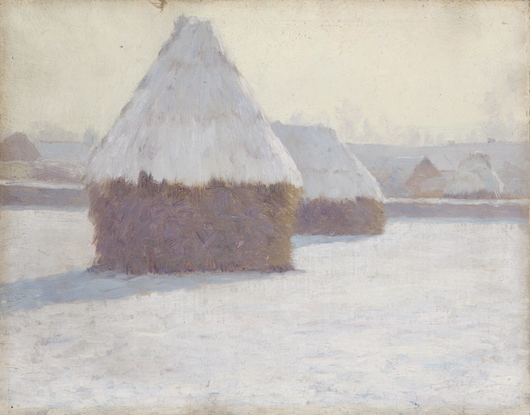 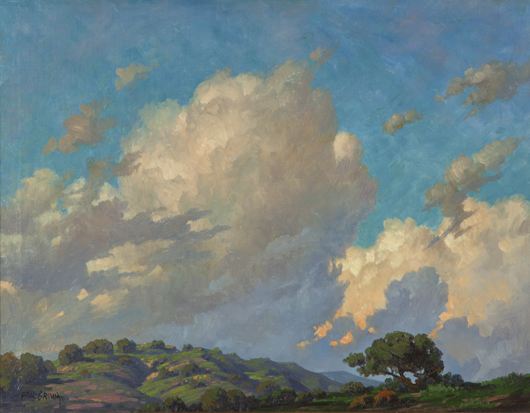 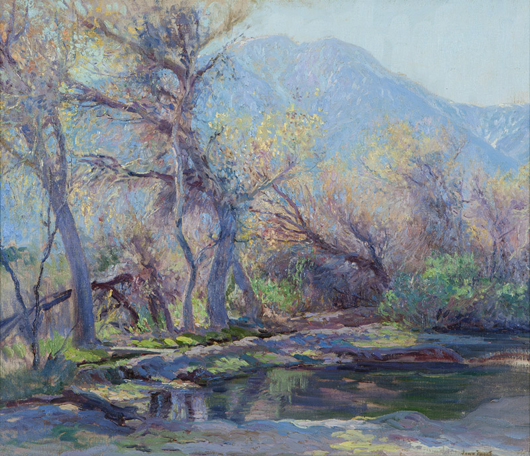 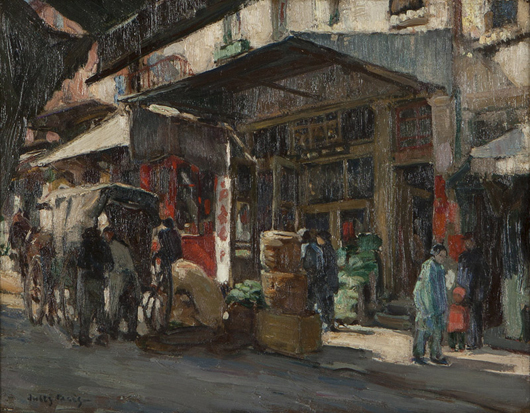 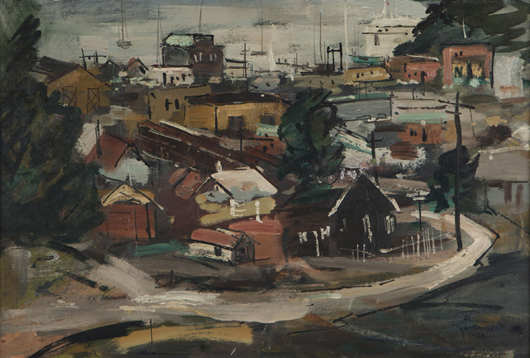 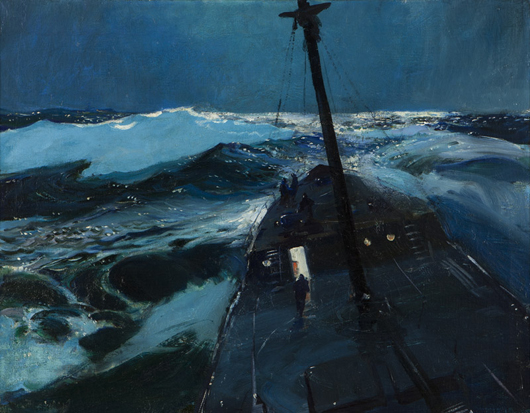