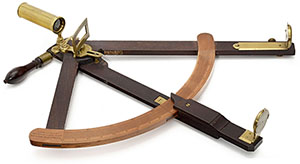 COLOGNE, Germany – Auction Team Breker of Cologne held its Spring extravaganza on May 24, a 750-lot sale that ranged from typewriters to telegraphs and automata to chronometers, all under the heading of antique toys and technology. Each area attracted its own set of specialist collectors, with the instruments of surveying and navigation garnering especial interest.

The top lot in this section was an early sea quadrant by royal instrument-maker George Adams the elder dated 1751 (lot 118). Built for taking the altitude of the sun and the latitude at sea, the rosewood instrument had a signed boxwood scale, original box with maker’s label, retailer’s card and, most unusual of all, a telescope to align with the mica viewing window. The instrument’s rarity and fine original condition caused the bidding to sail to twice its presale estimate at 17,700 euros ($24,250).

Another early instrument that awoke interest was a brass octant by Jan Cornelius von Voer from the Frisian Island, Föhr, of circa 1760 (lot 124). The A-form frame, supporting pinhole sight and two shades, featured an unusual acanthus leaf decoration and central strut modelled as a flower girl. The instrument fetched 4,300 euros (US$ 5,900).

An unusually large tellurium by Jan Fekl of Prague (lot 167) was designed to demonstrate the orbit of the earth and moon around the sun (represented by a candle) in schools and universities of the 1890s. Measuring over 60 inches, bidding for this impressive piece rocketed to 8,600 euros ($12,000).

Thomas Edison is most famous for being the first to record sound and developing the electric light bulb commercially, however he was also part of the race to patent a telephone. The result was the 1877 “Electromotograph” telephone receiver (lot 42), which contained a hand-cranked rotating chalk drum and, according to contemporary accounts, produced enough sound to fill a small hall. Playwright George Bernard Shaw wrote that Edison’s “much too ingenious invention … bellowed your most private communications all over the house instead of whispering them with some sort of discretion.” Despite its original shortcomings, this rare machine reached 29,500 euros ($40,000) at auction.

Anything but discrete was Edison’s invention. Not so the “Discret” typewriter of 1899 (lot 94) by Friedrich Rehmann of Karlsruhe, which fetched 8,100 euros ($11,000). The elegantly designed World model (the company produced a second version for “Geheimschrift” – cipher) incorporated a type-wheel and scale for regular writing. Another popular office antique was a well-preserved example of the 1892 North’s Typewriter (lot 92) for 9,200 euros ($13,000).

The almost 300 lots of self-playing musical instruments included musical boxes from an historic privately owned collection in America. Among them was the highest-selling lot of the day, a magnificent interchangeable orchestral musical desk by Heller (lot 435) for 30,360 euros ($42,000). With a repertoire of 72 titles transcribed onto 26-inch pinned brass cylinders and a reed organ, bells, snare drum and castanets as percussion, the instrument must have represented the very finest of “entertainment systems” of its era.

Equally impressive was a rare Swiss “station” musical box attributed to Henri Vidoudez of St. Croix from circa 1890 (lot 476). Such large coin-activated musical boxes, built as attractions in public places such as hotels, restaurants and station waiting rooms, incorporated eye-catching novelties such as dancing dolls and Mandarin bell-ringers. This example boasted an additional candy-dispenser (with candy) and fetched 27,800 euros ($38,000).

A third audio-visual musical box worth mentioning is the splendid “Pièce à Oiseaux” by Ami Rivenc (lot 421) for 17,200 euros ($24,000). Perched in his glazed bower to the fore of the musical box was a miniature automaton bird that accompanied the six operatic airs with a realistic trill. From one of the largest to the smallest, a fine early 19th century musical snuff box with micro-mosaic lid (lot 467) made 17,200 Euros ($24,000).

After mechanicallyoperated music came early devices for playing recorded sound. One of the most advanced of its day was the 1927 H.M.V. Model 203 gramophone (lot 403). With its mathematically exact exponential “re-entrant” horn and luxurious gold-plated fittings, the machine represented a then state-of-the art sound reproduction. The machine, still a joy to hear today, almost ninety years later, fetched 8,000 euros ($11,000).

Related to clocks and musical boxes by way of their spring-driven mechanisms are automata. One of the most famous in the 18th century was Wolfgang von Kempelen’s “Turk” that appeared able to play a human opponent at chess. Not an automaton in the true sense, but a mechanical illusion operated by a hidden chess master, its performances were documented by a spectator in a rare pamphlet published in 1783 (lot 241) that sold at the auction for 3,400 euros ($4,700).

Automata in the auction dated mainly from the late 19th and early 20th centuries and included a menagerie of mechanical animals, musicians, magicians and smokers. Top dog in the first category was a humorous “Cochon en Promenade,” a rare entry in the catalog of Parisian firm Decamps from circa 1912 (lot 547). Depicting a gentlemanly pig-person, the elegant figure in his original checked velvet jacket waved a courteous trotter, sniffed the air and twirled his umbrella in an unmistakably French fashion for 11,400 euros ($16,000). Another animal on parade was Decamps’ “Paon Marchant” (lot 567), whose ponderous progress propelled bidding to 5,600 euros ($7.700).

lick here to view the fully illustrated catalog for this sale, complete with prices realized. 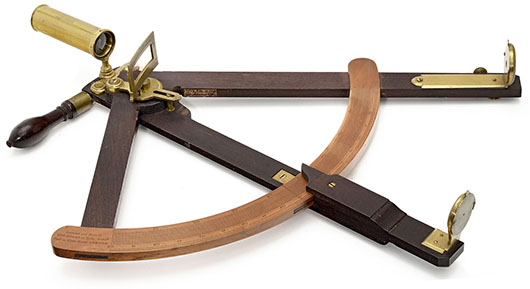 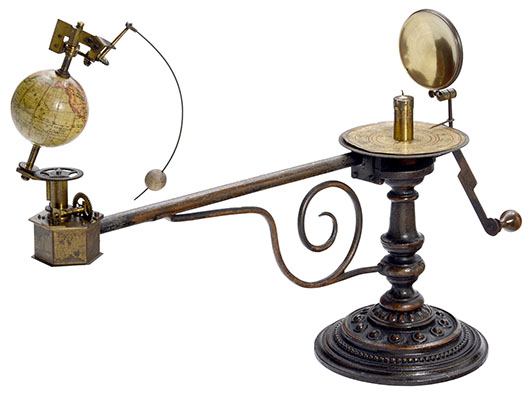 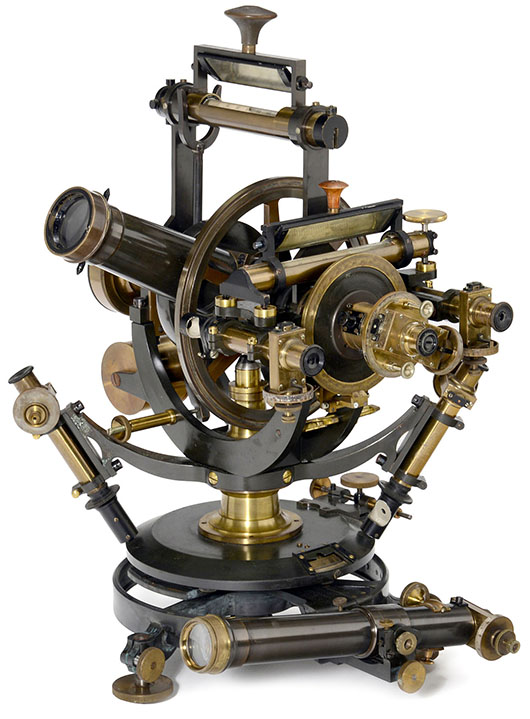 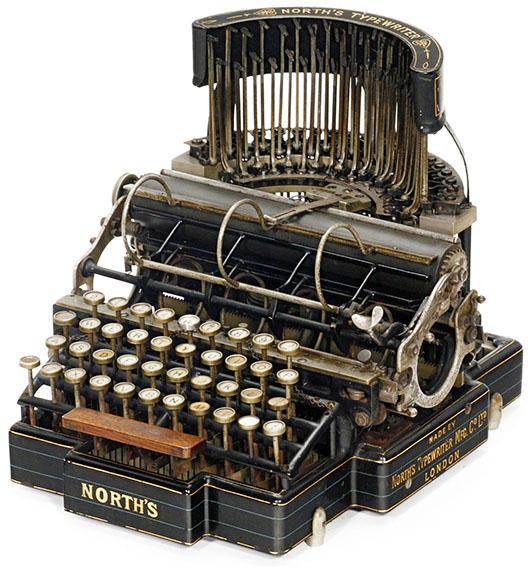 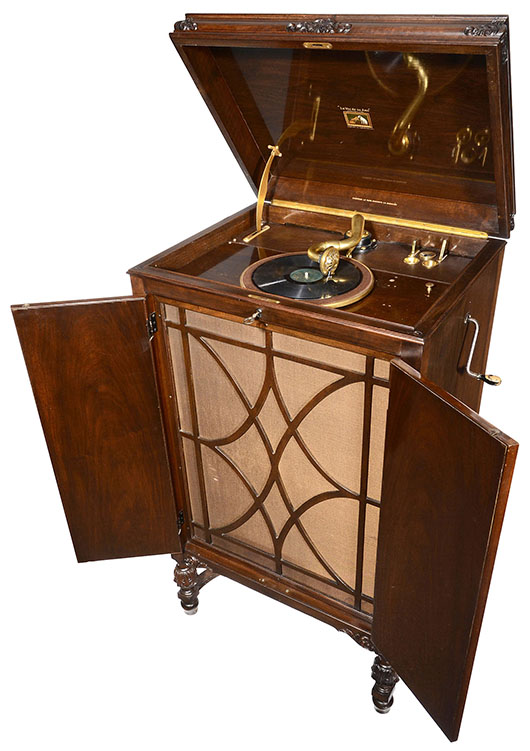 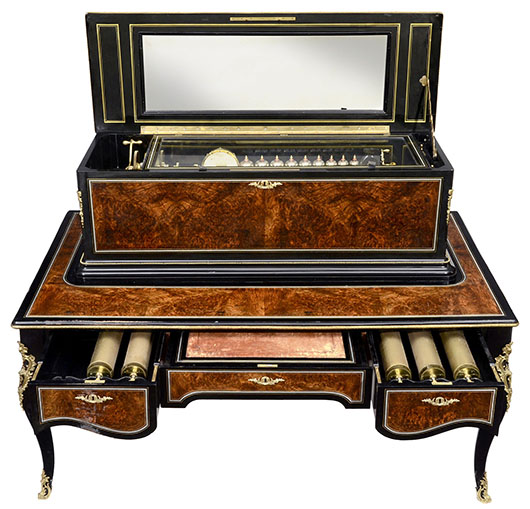 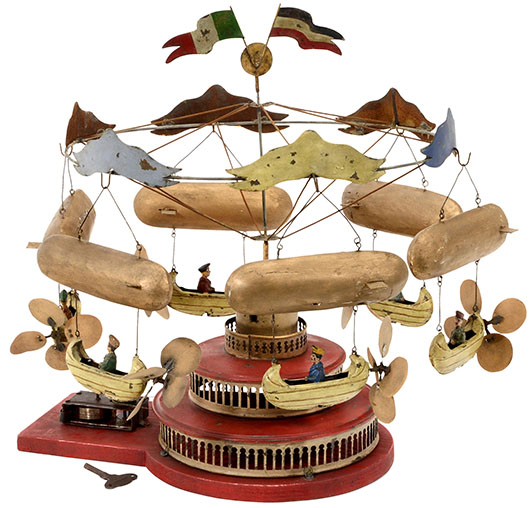 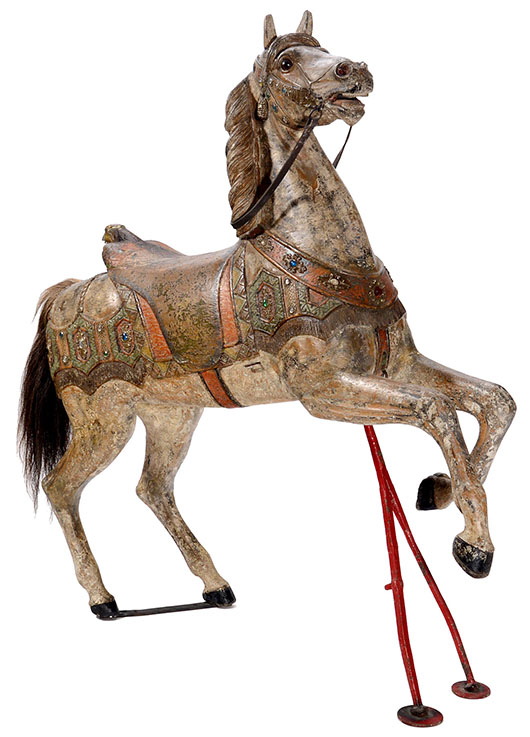