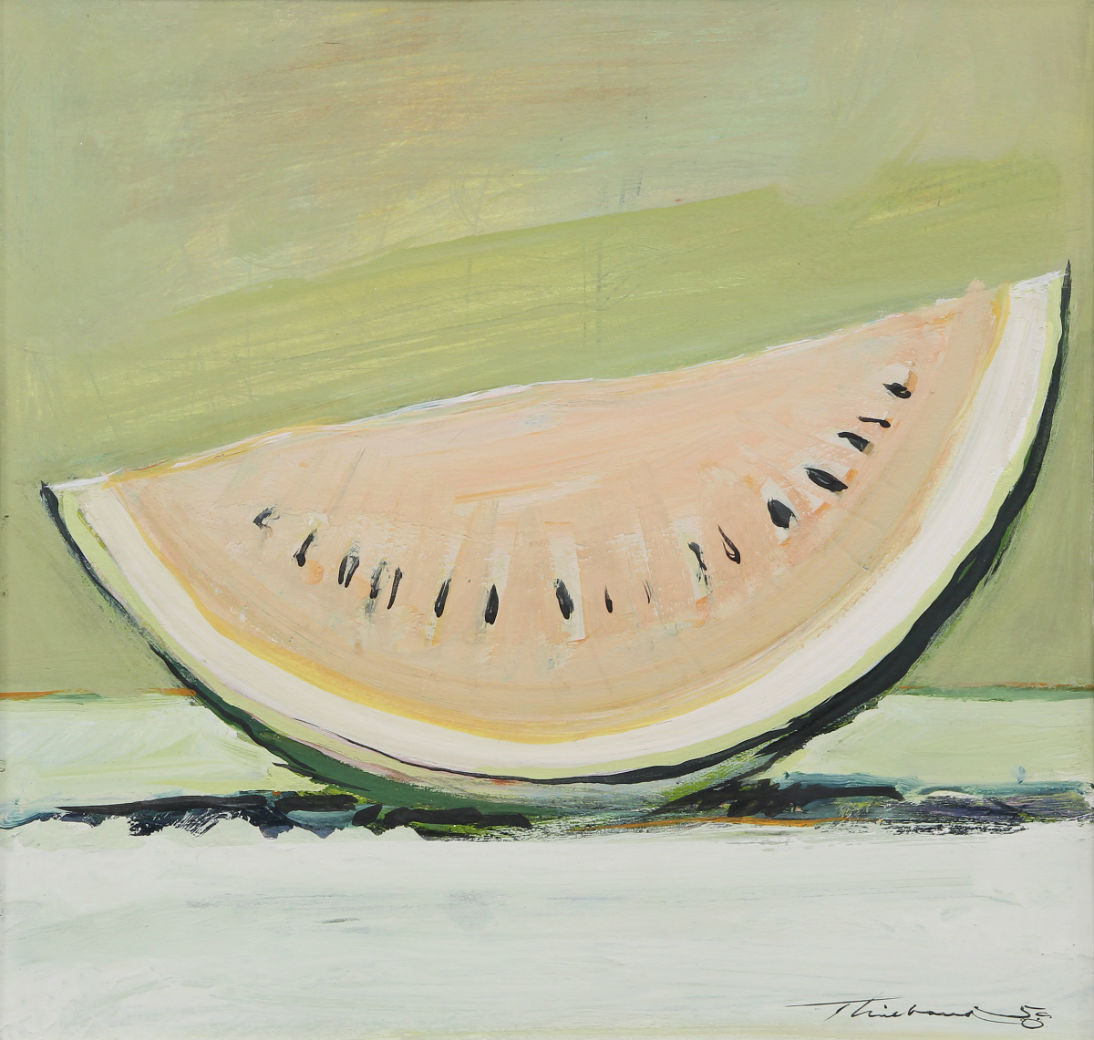 OAKLAND, Calif.– On February 18 and 19, Clars Auction Gallery presented to the market important fine art and prints and the first installment of select decorative art and furnishings deaccessioned from the Metropolitan Museum of Art in New York. The sale achieved $2 million with fine art reaching almost $1 million and the collection from the Metropolitan Museum of Art soaring past estimates achieving $285,000. Absentee and Internet live bidding was available through LiveAuctioneers.

After the auction, Redge Martin, president of Clars, commented, “There was broad interest in this auction, and we saw a strong sell-through in most categories.”

The highlight of the fine art offerings was the first-ever public offering of two early Wayne Thiebaud (American, b. 1920) paintings. Thiebaud’s 1958, Watermelon Slice, (above) a casein on board, and Skyline (New York City), 1956, (below) a tempera on board painting. The market responded strongly to both of these works with Watermelon Slice selling for $78,650 and Skyline (New York City), 1956, soaring to almost twice high estimate going out at $48,400.

A great surprise of the sale was the price achieved on a watercolor by Chiura Obata (American/Japanese, 1885-1975). Titled Monterey Cypress on the Cliffs of Pebble Beach (1948), (below) this watercolor and gouache on silk, was expected to sell for $4,000-$6,000, but competitive bidding drove the final sale price to $33,275. 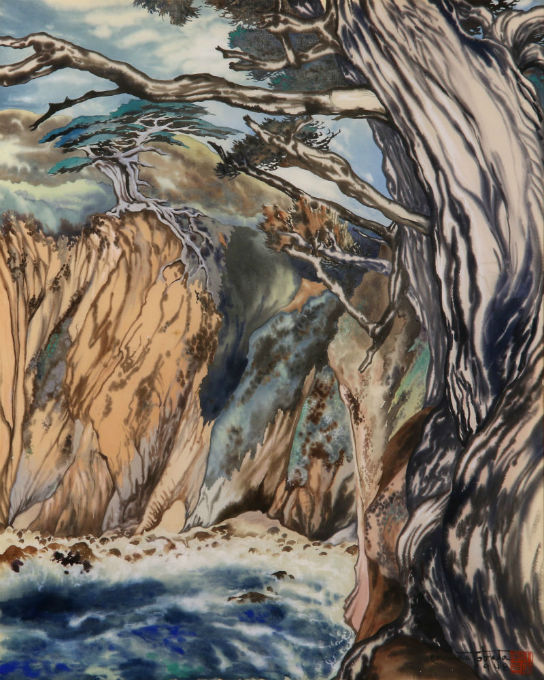 Several other works performed impressively including Portrait of Woman with Yellow Head Wrap, an oil on canvas by Russian artist Nicolai Fechin (1881-1955), that achieved $45,375. Selling for high estimate at $25,410 was a work by Thomas Hill (American, 1829-1908), titled At the Foot of Bridal Veil Falls. Capturing the same price was Patrick Hughes’ (American, b. 1939) oil on board titled Personspective (2003).

Rounding out the fine art highlights was California Vista, an oil on canvas by artist William Wendt (American, 1865-1946), which sold well at $22,990, and a work by artist Gregory Kondos (American, b. 1923), whose oil on canvas titled Greek Windmill brought $21,780. Surpassing high estimate was an oil on canvas from Louis Comfort Tiffany (American, 1848-1933) titled Orientalist Scene with Figures and Tent, which went out at an impressive $16,940.

A collection of museum quality fine art prints from a privately held single-owner collection from Piedmont, California, was another highlight of this sale. By one of the Bay Area’s most celebrated artists, Richard Diebenkorn (American, 1922-1993) his woodblock print titled Blue with Red, 1987, (below) soared past its opening bid of $15,000 to sell for $42,350. 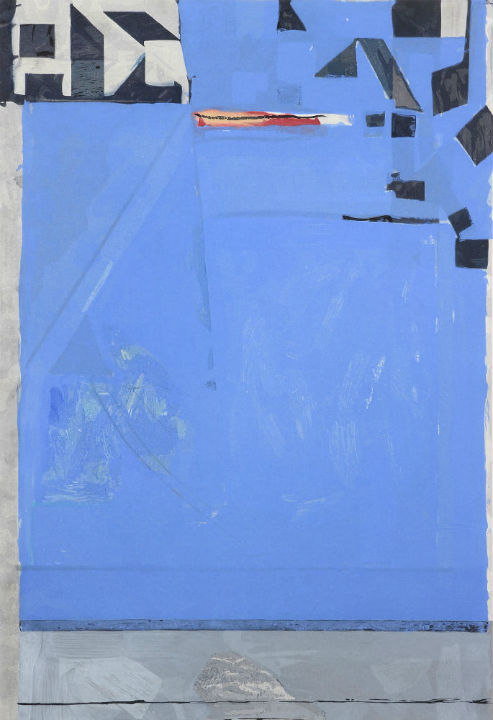 After the sale, Rick Unruh, vice president and director of fine art commented, “While we had a very important collection of exceptional postwar prints which sold very well, it was good to see strength across the board in all categories.”

On Sunday, Feb. 19, Clars presented the first installment of approximately 100 lots of select property from the Metropolitan Museum of Art in New York City. This collection, which is being sold to benefit the museum’s acquisition fund, is comprised of both decorative art pieces and furniture. The market responded robustly with many lots far surpassing their high estimates reflecting both the prestige of the collection and institution overall.

Deric Torres, vice president and director of decorative arts and furnishings, noted that the number of winning international bidders surpassed the number of domestic bidders. “This really validates the importance of the provenance of these pieces as well as the global reach of Clars’ marketing on behalf of our clients,” he said.

The furniture collection was well received with competitive bidding seen throughout the sale. The top lot of this collection overall was the 17th century Italian refectory table (below) that was estimated to sell for $4,000 to $6,000 but strong bidding drove the final sale price to $42,350. 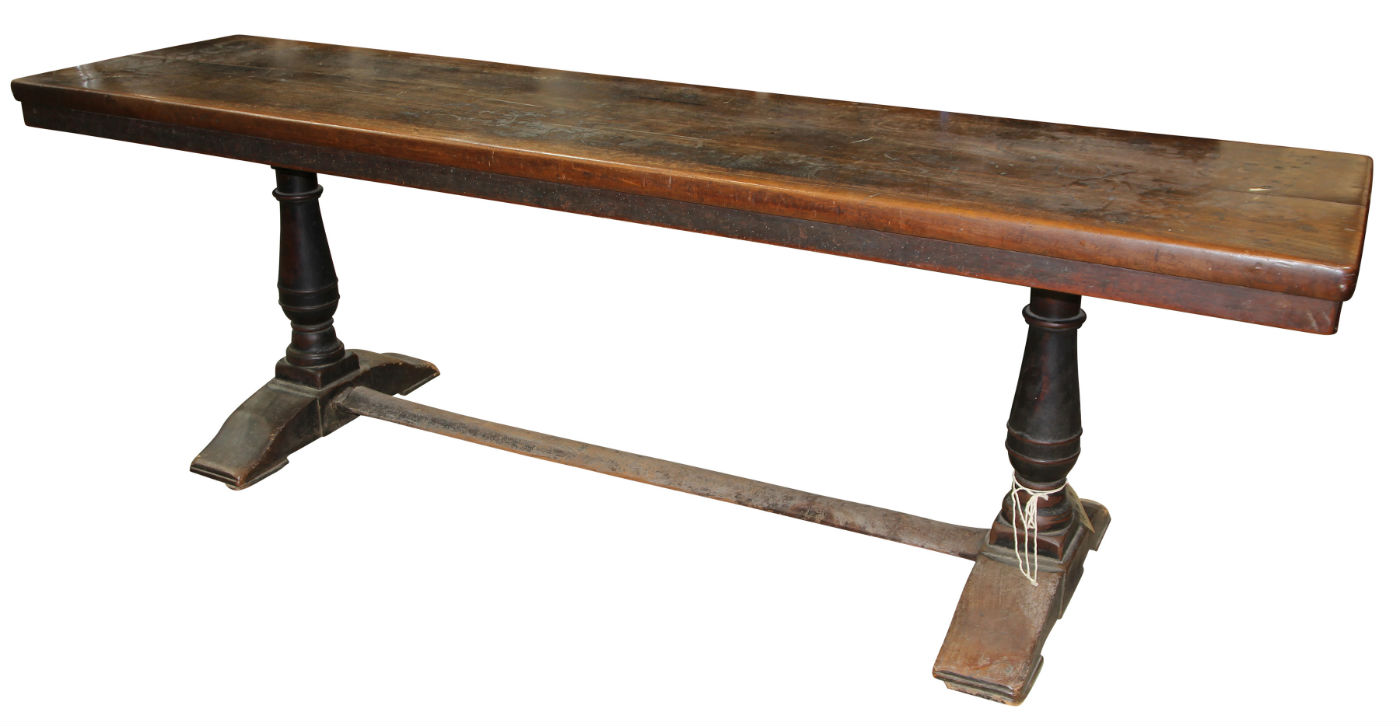 The top lot of the offerings from the Metropolitan Museum of Art was this 17th century Italian refectory table that sold for $42,350. Clars Auction Gallery image

The property from the museum also consisted of porcelains and decorative art. The top seller in this category was a pair of French rouge royal marble and gilt bronze urns, 19th century (below) after Pierre Gouthiere (1732-1813). Offered with an estimate of $8,000 to $12,000, these urns commanded $18,150. 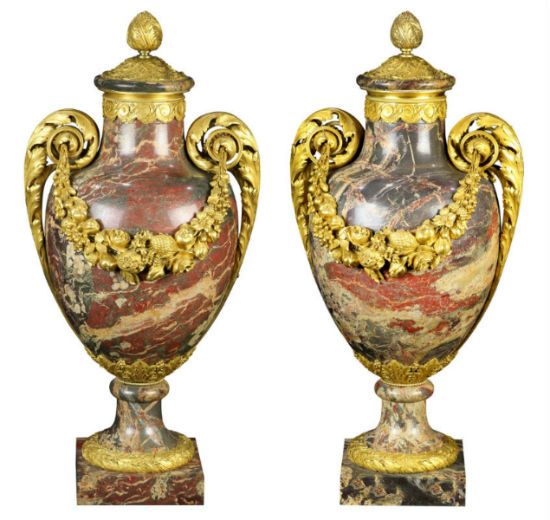 The top highlight in the porcelains and decorative art from the Metropolitan Museum of Art was this pair of French rouge royal marble and gilt bronze urns, 19th century, after Pierre Gouthiere (1732-1813). Offered with an estimate of $8,000-$12,000, these urns commanded $18,150. Clars Auction Gallery image

Clars will offer the second installment of the property from the Metropolitan Museum of Art at their March 19 sale.

An additional collection that was offered in the February sale was property from the estate of Thomas J. Perkins, San Francisco and Belvedere, California. Highlights included a Lwalwa D.R. Congo carved wood mask that sold for double its high estimate at $10,890, and a Spanish Baroque carved giltwood mirror, late 17th century, that also sold for over high estimate for $9,075.