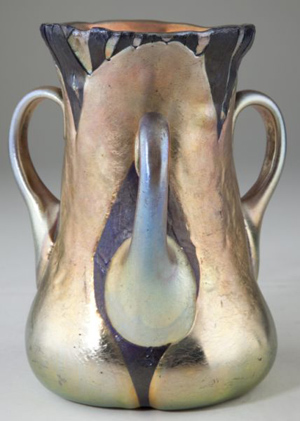 The top lot of the sale was this Tiffany & Co. Favrille glass three-handled vase, which sold for $62,100. Photo courtesy of Leland Little Auction & Estate Sales Ltd.

The vase was the top lot in a sale that saw more than 100 fine wine lots change hands in the Sept. 17 session and around 550 lots cross the block the following day. Overall, the auction grossed $750,000.

Leland Little of Leland Little Auction & Estate Sales Ltd. remarked that Asian objects, estate jewelry, fine art and ceramics were all strong performers in the sale, while English and American furniture prices – which aren’t being as rewarded financially due to tepid demand – did not do quite as well. “But even there,” he added, “we saw exceptions at the top level of merchandise. In the end, quality will override a soft market.”

He cited as an example an American Classical stencil-decorated center table, made in the 1820s, mahogany with mahogany veneers, attributed to Deming & Bulkley, New York cabinetmakers. It went for $9,200, about triple the high estimate. Also, a Renaissance-style American marble-top buffet, made around the 1870s, walnut with poplar and pine, also did well at $4,140.

The Tiffany vase was the undisputed star lot of the auction, wowing bidders with its organic baluster form and rich gold overlay on a bluish-purple body. Another Tiffany decorated Favrile glass vase, baluster form with a green ground and pulled gold decoration, made $7,475, while a signed Daum Nancy French art glass low vase with nice forest scene garnered $3,680.

All prices quoted include a 15 percent buyer’s premium. Online bidding was facilitated by LiveAuctioneers.com.

From the European art category, an unsigned oil on canvas portrait of James Lockhart by Sir Henry Raeburn (British, 1756-1823), in a gilt wood frame, achieved $12,650; an original oil on canvas by German painter Carl Triebel (1823-1885), depicting Lake Brienz in Switzerland, rose to $5,290; and a 19th-century Italian School oil on canvas of Aphrodite and Adionis made $2,185.

Fine estate jewelry was a strong feature category in the Sept. 18 session. An Art Deco diamond and sapphire bracelet made in the 1930s brought $12,075; a diamond solitaire ring with a stone weighing 5.56 carats set in platinum peaked at $41,400; a magnificent mid-to-late 20th-century diamond brooch went for $7,188; and a platinum and diamond cut bracelet (Jewelsmith, 1998) also made $7,188.

Asian porcelains also included a rare set of 10 fully intact Canton porcelain nesting bowls, each decorated with a different figural scene ($5,060); a pair of Chinese Qing Dynasty ivory plaques, both etched and colored with figural and landscape depictions ($1,725); and a Chinese tin-wrapped teapot from the Qing Dynasty, angular form with ceramic body ($1,265).

European porcelain performed well, too. A bisque figure of the Barberini Faun by 19th-century artist Volpato (after the antique by Barberini), impressed with an artist’s mark to the base, breezed to $5,520, while a gorgeous Meissen figural group with seven figures on a rocky outcropping with a musical theme and a bottom with under glaze blue crossed swords hit $2,530.

Sterling silver offerings were led by creations by Georg Jensen. These included a pair of Jensen sterling compotes with applied grape design and circular footed base ($6,037), and a Jensen silver pitcher with ebony handle, ovoid body and beaded base ($4,830). Also, a fine set of four sterling candlesticks by Gorham of classic form with Corinthian capitals coasted to $2,645.

Prices realized for European furniture from France weren’t flat at all. A pair of early 20th-century ormolu mounted arm chairs in the Second Empire style, beautifully crafted from mahogany and beech, climbed to $4,600, and a pair of carved eagle console tables made in the 19th century, with a mottled black marble top over an egg and dart molding, commanded $3,680.

Many wild and wonderful items that defied category crossed the block that weekend. A few examples include a Richardson’s New Map of the State of Texas (1860), colored lithograph, went for $4,140; a set of five illuminated Korans and Islamic prayer books from the 18th or 19th century brought $2,185; and an English wax portrait of Prince Leopold, circa 1816, hit $1,955.

As stated, the entire Sept. 17 session was dedicated to Fine Wine, a burgeoning genre of collecting that has been getting prominent attention at recent Leland Little auctions. “On a per-bottle basis, many lots sold for above the international average,” Little said. “We see that our wine department is strong and our prices are very competitive.” 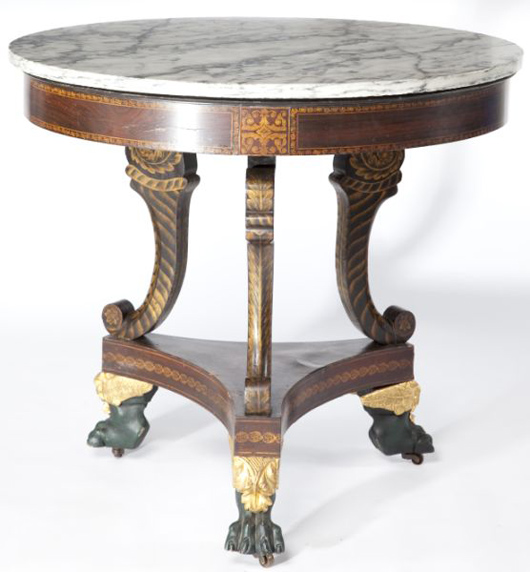 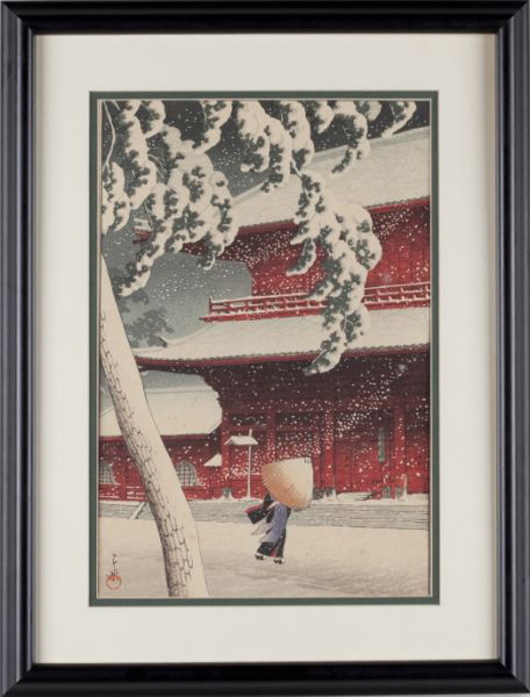 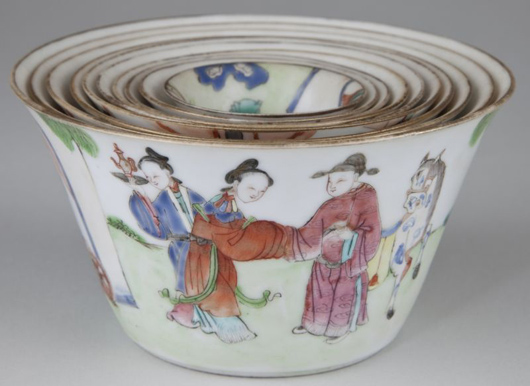 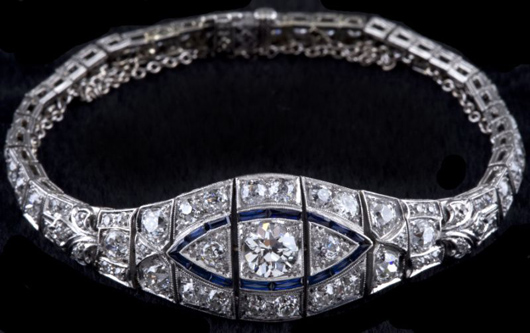 Construction under way on Bair art building in Montana