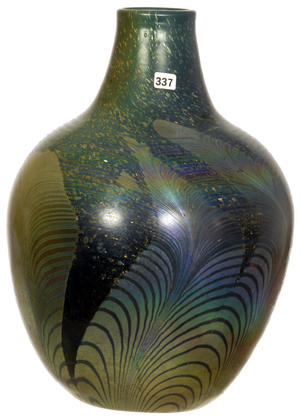 WICHITA, Kan. – A museum-quality Louis Comfort Tiffany art glass vase, pastel white and green with finely engraved calla lily décor and numerous beetle and spider highlights, soared to $60,000 on at Part 1 of a planned five-part series by Woody Auction to sell the lifetime collection of mostly porcelain and fine art glass collected by the late Dr. Ernest Rieger and his wife, Karin.

The vase – 8 inches tall and signed by the maker “LCT #X1175” – was the top lot of the March 20 auction that grossed $1.3 million and was described by auctioneer Jason Woody of Woody Auction as “by far the finest art glass auction ever held in Kansas,” adding, “Part 2 (scheduled for Thursday, May 29) promises to be just as exciting.”

Exactly 400 lots came up for bid, at the Doubletree Airport Hilton in Wichita. More than 100 bidder numbers were issued to the in-person crowd, while another 955 people registered to bid online, via LiveAuctioneers.com. Also, 35 bidders participated via absentee bid.

The Riegers were discerning, serious collectors, seeking out only the finest names in porcelain and glass, such as Tiffany, Galle, Meissen, Webb, Daum Nancy, KPM and others. The couple also collected period antique furniture, which they used and displayed in their Wichita home. The furniture will be sold in the later auctions. The May 29 event will be followed by a two-day auction, Aug. 1-2.

Following are additional highlights from the recent auction. All prices quoted are hammer. There is no buyer’s premium at a Woody Auction.

The runner-up for top lot was a set of four Meissen pedestal handled ewers, all about 25 inches tall and representing earth, wind, fire and water. The set sold as one lot for $57,500. Each piece had the traditional Meissen blue crossed swords mark. Earth was Diana the huntress with Pan, wind was cherubs playing bagpipes, fire was a woman tending a flame and water was Neptune.

In third place, breezing to an impressive $44,000, was a 20-inch signed Tiffany art glass gladioli paperweight vase, boasting a green and lavender background with white blossom décor. It was signed “Louis C. Tiffany Favrile #3280P.” This vase – or one identical to it – was pictured sitting on a mantel in the Tiffany home in Robert Koch’s book titled Louis C. Tiffany Art Glass.

Bidders seemed powerless to resist anything that carried the Tiffany name. A monumental and signed Tiffany decorated art glass vase having an iridescent aqua green background with pulled feather design, 15 1/2 inches tall, brought $39,000; and a 4 inch by 4 inch signed Tiffany art glass vase with an iridescent bronze body with 10 “windows” around the middle garnered $36,000. 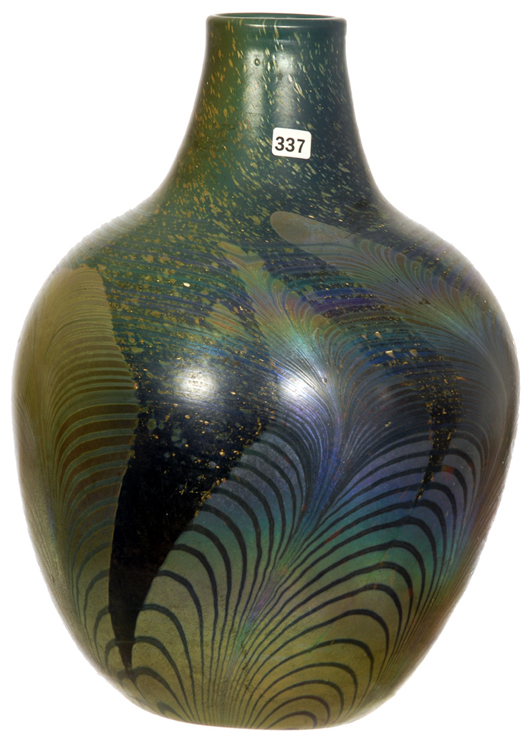 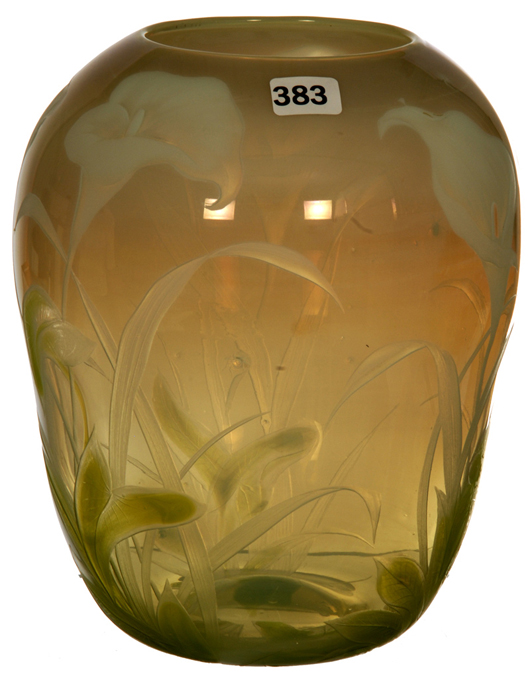 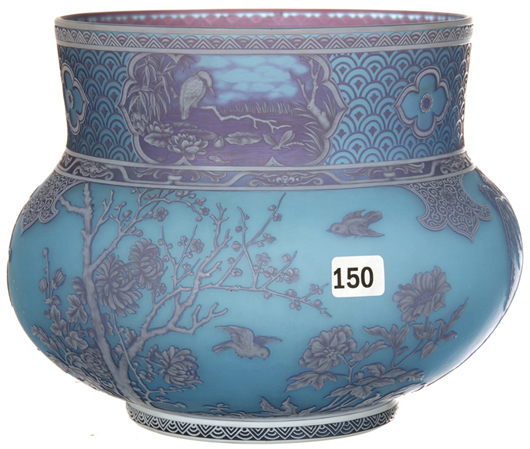