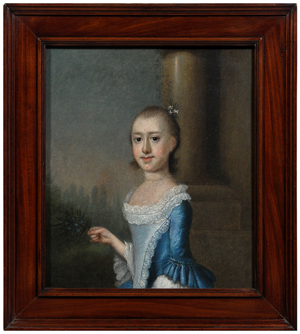 When sold in 1980, this oil on canvas portrait of Amarinthia Elliott attributed to Jeremiah Theus was titled, Miss Elliott of Charleston, SC. That’s when Jim Williams purchased it at C.G. Sloan’s Auctioneers. Williams sold the painting to Tom Gray through an agent. The portrait went to a phone bidder for $94,400, a new record for the artist.

OLD SALEM, N.C. –  “That was quite a ball game!” remarked one dealer at the conclusion of the sale of the Tom Gray collection March 29. It was an apt analogy. During the eight-hour, 560-lot sale conducted by Brunk Auctions, with Internet live bidding through LiveAuctioneers.com, there were plenty of home runs, some surprising plays and a few new stats for the record books.

The sale’s big home run came mid game when a private collector from Atlanta bought a North Carolina Chippendale cellaret for $165,200, a new record for the Southern form. (All selling prices quoted include an 18% buyer’s premium.) Anne Gray, Tom’s late mother, gave him the cellaret as a Christmas present when he was 16. Recent research has identified its maker: Micajah Wilkes, Roanoke River Basin, N.C., 1780-1795. Regarded as one of the stars going into the sale, the cellaret carried a presale estimate of $40,000-$60,000.

This was the second Southern furniture record broken by Brunk Auctions in the past two months. At the Feb. 20 sale, they sold a circa-1820 walnut Swisegood corner cupboard from Forsyth County, N.C., for a record-high $120,750.

Gray’s collection of shirred rugs hit four homers. Seth Thayer, a private curator from Northport, Maine, bought a 33 inch by 66 inch rare bias shirred rug of a large basket of flowers with floral sprays on homespun. From early to mid-19thcentury New England, the rug was $44,840 (est. $5,000-$10,000). Thayer then added Tom Gray’s favorite item in the entire sale to his collection. A yarn-sewn and chenille shirred rug with “AUGUSTINE.W. PHILLIPS” across the bottom edge dominated the exhibition room. Probably from Maine, Thayer bought the 54½ inch by 63 inch rug for $40,120 (est. $10,000/$20,000).

Roddy Moore of Ferrum, Va/, purchased what he regarded as “the best piece of Eastern Shore, Virginia furniture to come on the market in the past 30 years.” The single-case corner cupboard with yellow pine throughout and a restored painted surface was attributed to Accomack County or Northampton County, Va., 1750-1775. Moore, who researched the early history of the corner cupboard, purchased it for personal use for $64,900 (est. $12,000-$18,000).

While Southern furniture frequently exceeded high estimates, Gray’s New England furniture did not perform as expected. Of the 21 New England lots only one, a diminutive chest of drawers probably from Connecticut ($2,832) exceeded its high estimate (est. $800-$1200).

One of the sale’s biggest surprise came near the end of the day when an 1899 $10 banknote from Wachovia National Bank opened at $1,700, a rather high bid for a $250-$500 item. When the note and an unsigned blank Wachovia check sold to a floor bidder for $28,320, the audience gasped. Auctioneer Robert Brunk remarked, “You were right, Tom.”

Tom Gray was recognized during the sale as the leading benefactor of the Museum of Early Southern Decorative Arts (MESDA), the crown jewel of Old Salem Museums and Gardens. The recognition was particularly appropriate. This year is the 50th anniversary of the founding of MESDA by Tom Gray’s uncle Frank L. Horton and Horton’s mother Theodosia “Theo” L. Taliaferro.

Tom Gray’s 1787 Traugott Bagge House is approximately 100 yards from the auditorium of Salem Academy’s Fine Arts Center, the sale’s location. His furnishings were packed and moved to the auditorium two days before the sale. Tom is relocating to his furnished penthouse apartment at Carolina Beach, North Carolina. The Gray family fortune descended from Tom Gray’s grandfather, James A. Gray and great-uncle, Bowman Gray Sr., both former chairmen of the board of R.J. Reynolds Tobacco Company, headquartered in Winston-Salem, North Carolina.

Gray and his family remained for the entire sale. As buyers were leaving the auditorium, Gray greeted everyone, commented on the items they purchased and expressed his appreciation for them and congratulated them on their acquisition. 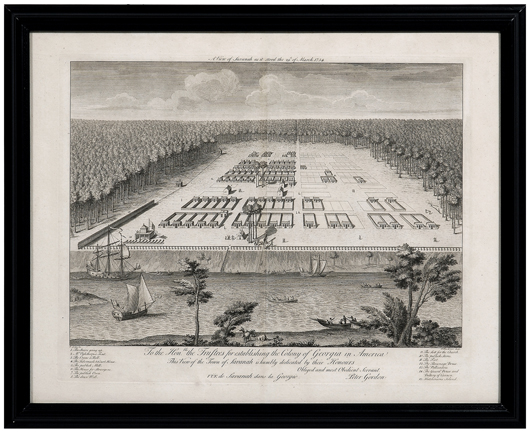 Surveyor Noble Jones is credited with the design of the plat for the new colony of Savannah. The 1734 engraving was produced by Peter Gordon Fourdrinier. One of only 12 known copies, this 21 1/8 inch by 26 3/8 inch rare and important engraving sold to a phone bidder for $70,800. 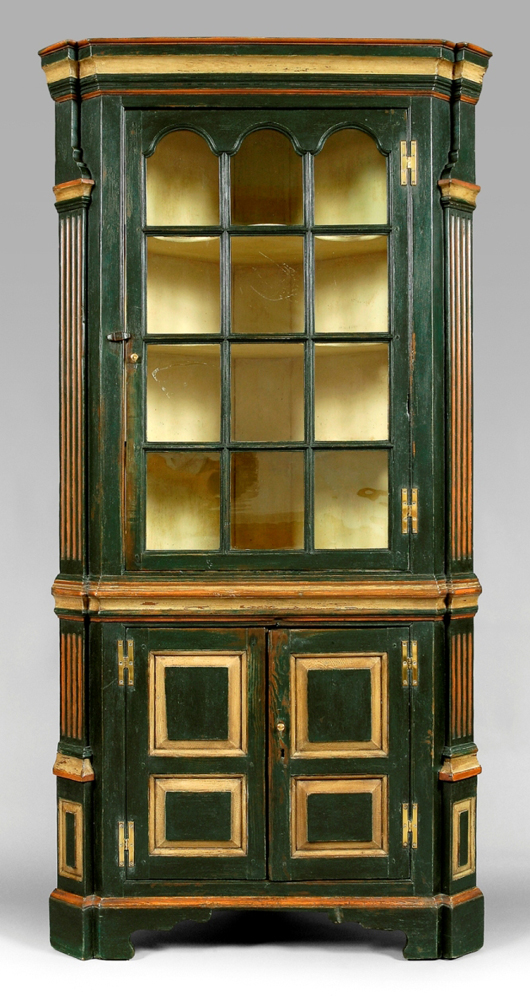 Roddy Moore of Ferrum, Va., purchased this 81¾ inch by 41 inch by 21 inch Eastern Shore, Virginia, corner cupboard for $64,900 (est. $12,000-$18,000). The arched glazed upper door with some of its early glass opens to deeply scalloped fixed shelves. The corner cupboard was featured in a 1978 exhibition, Furniture of Eastern Virginia. 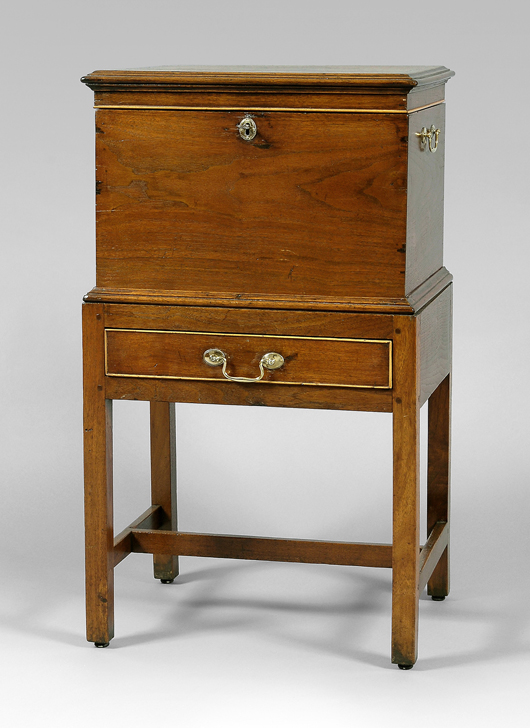 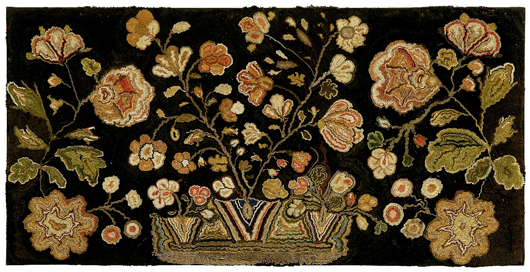 Traditional bias-shirred rugs from the 18th century included flowers on a black background. This 33 inch by 66 inch example adheres nicely to that standard. It was featured in a December 1997 article in The Magazine Antiques on the furnishings of Tom Gray’s home. Seth Thayer of Northport, Maine, bought it for $44,840 (est. $5,000-$10,000), an amount that is believed to be an auction record. 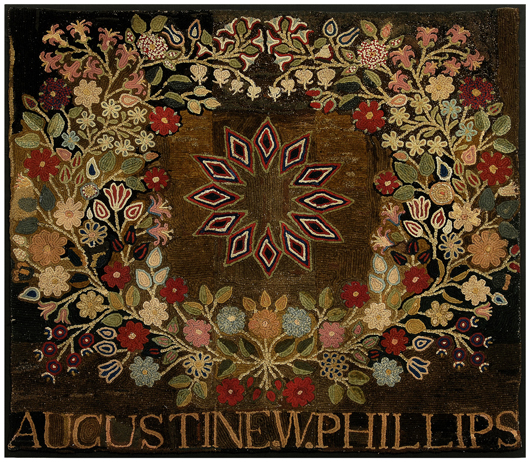 Colors are bright on this early to mid-19th century chenille shirred rug that was Tom Gray’s favorite piece in the sale. At 54½ inches by 63 inches, it made a statement – and Maine private curator Seth Thayer listened. He bought it for $40,120 (est. $10,000-$20,000). The rug is illustrated in American Hooked and Sewn Rugs. A copy of the 1985 book accompanied the rug. 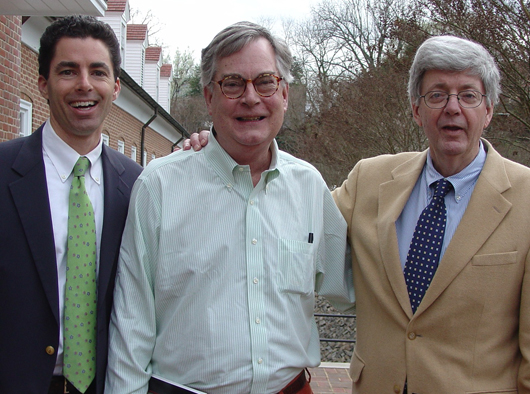 (Left to right): Andrew Brunk, Tom Gray and Robert Brunk at the conclusion of the March 29 sale.