Just over 400 lots of American Brilliant Cut Glass came up for bid in a sale headlined by the collection of Dr. and Mrs. Charles Dudgeon. About 150 people, holding 82 bidder numbers, attended the event in person, while another 350 bidders participated online, through LiveAuctioneers.com. Around 24 absentee bidders also took part. There was no phone bidding. It was an absolute auction – all lots sold.

“Sellers can be a little leery of an auction without reserves, but this sale proved that if you have quality merchandise to offer, you’ve got nothing to worry about,” said Jason Woody of Woody Auction, based in Douglass, Kan. “We were very pleased with the outcome, both in terms of high prices realized and the tremendous turnout of live and online bidders. The success reflects the quality we were selling.”

Following are additional highlights from the auction. All prices quoted are hammer, exclusive of a sliding commission structure. There is no buyer’s premium at a Woody Auction.

A signed Libbey punch bowl set in the rare Aztec pattern, with a 14-inch by 15-inch two-part punch bowl with 12 punch cups with handles and a matching ladle, soared to $35,000; and an original four-drawer cherrywood stemware chest, stocked with 69 rock crystal stems in Pattern #105 (as featured in Sinclaire, Vol. I, pg. 24), brought $25,000. The glass lid lifted to reveal a mirrored base.

An exquisite 12 1/2 inch signed Tuthill round tray in the Rex pattern, having one of the clearest blanks ever seen on such an example, changed hands for $23,000; and the finest rose bowl Woody Auction has ever sold at auction – a massive 7 1/2 inch by 10 inch signed Libbey bowl, cut in the rare Emerson pattern designed by W.C. Anderson, one of the true cut glass rarities – hammered for $18,000.

A super 17 1/2-inch by 10-inch ice-cream tray with 12 plates in the Wedgemere pattern by Libbey, with all of the 7-inch plates in outstanding condition and the overall set in great condition, breezed to $10,000; and a 13 1/4 inch round tray with six 7-inch plates having a flashed hobstar center surrounded by interlocking vesicas featuring cane and diamond point highlights topped out at $9,500.

Two lots posted identical prices of $5,500. The first was a hard-to-find bread bowl in the Columbia pattern by Libbey, measuring 11 3/4 inches by 7 3/4 inches and boasting a brilliant blank and fine cutting. The second was an attractive 14 1/2-inch signed Tuthill flared vase in the Wild Rose pattern. The vase had a heavy blank with a pattern cut base and overall was of very good quality. Both fine examples.

One other lot reached $5,000. It was a pie-shaped round tray in the Arabesque pattern by J. Hoare, measuring 2 inches by 10 1/2 inches. Also, a beautiful five-piece cranberry to clear table set with three stems, one finger bowl and one underplate, attributed to Hawkes on Steuben blanks, coasted to $4,250. The set featured bulging teardrops with engraved floral highlights and with a cut stem and base.

A pair of 4 1/2-inch tall amber cut to clear wine glasses in a Russian pattern with star cut buttons and a pattern cut base commanded $4,250; a gorgeous 12-inch signed Libbey round tray in the Delphos pattern with brilliant blank and superb cutting, garnered $4,300; and a pair of 4 1/2-inch cranberry cut to clear wine glasses in a modified Russian pattern attributed to Hawkes, with clear blank, rose to $4,750.

A set of five rose-colored cut to clear wine glasses in a strawberry diamond, hobstar and fan motif, with double teardrop stem and rayed base, 5 1/4 inches tall, achieved $3,500; and an elegant 11 1/2-inch green cut to clear handled pitcher with finely engraved iris décor and fancy embossed sterling iris spout, attributed to Thomas Webb with carved and decorated European art glass by Grover, made $3,100.

A 16 1/2-inch Gone With the Wind kerosene lamp with hobstar, strawberry diamond, block and fan motif, with the original oil font having a patent date of 1884, illuminated the room for $3,000; a 10-inch, eight-sided tray in the Alahambra pattern by Meriden, with good quality teeth, realized $2,500; and a pedestal stand in the Alahambra pattern, also known as Greek Key, with extra heavy blank, hammered for $2,300.

A set of three gold-colored finger bowls and underplates with hobstar center and hob button border, attributed to Union Cut Glass, breezed to $2,200; a 10-inch signed Sinclaire plate in the Assyrian pattern fetched $2,200; a pedestal flared center bowl, Aberdeen by Jewel, with extra heavy blank, brought $2,100; and a pair of signed Hawkes cut to clear wine glasses in the Gladys pattern gaveled for $2,100.

A beautiful green cut to clear pyramid-shaped decanter with engraved iris décor, elephant-shaped handle, embossed sterling spout with iris décor and matching stopper, attributed to Thomas Webb, found a new owner for $2,000; an ice-cream tray with six 7-inch plates in the Columbia pattern by Blackmer went for $2,000; and a six-sided pedestal vase in the Adam #2 pattern by Sinclaire, topped out at $1,900.

Woody Auction is always accepting quality consignments for future sales. To consign an item, an estate or a collection, call them at 316-747-2694. Or e-mail them at info@woodyauction.com. 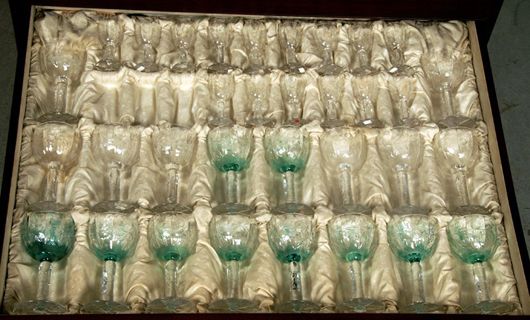 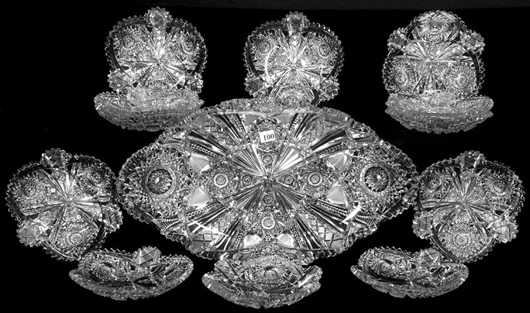 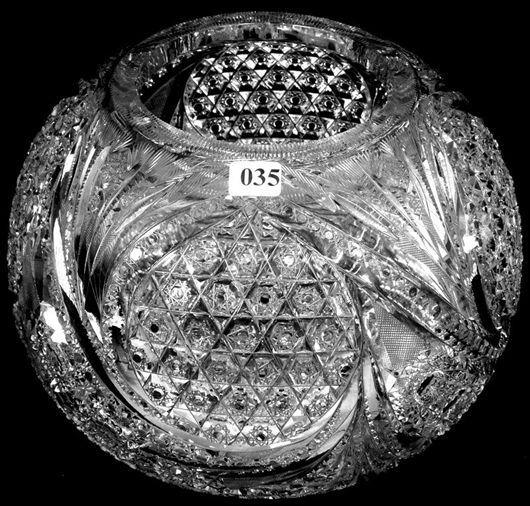 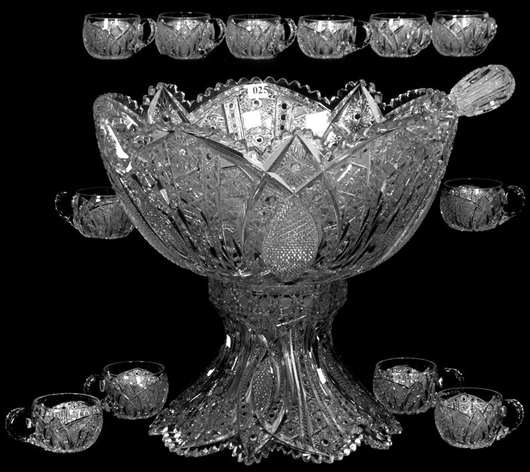 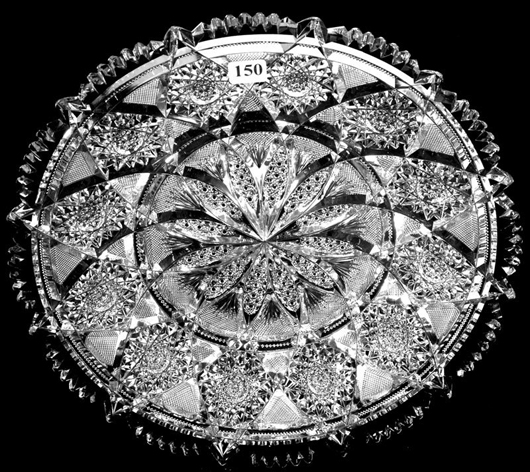