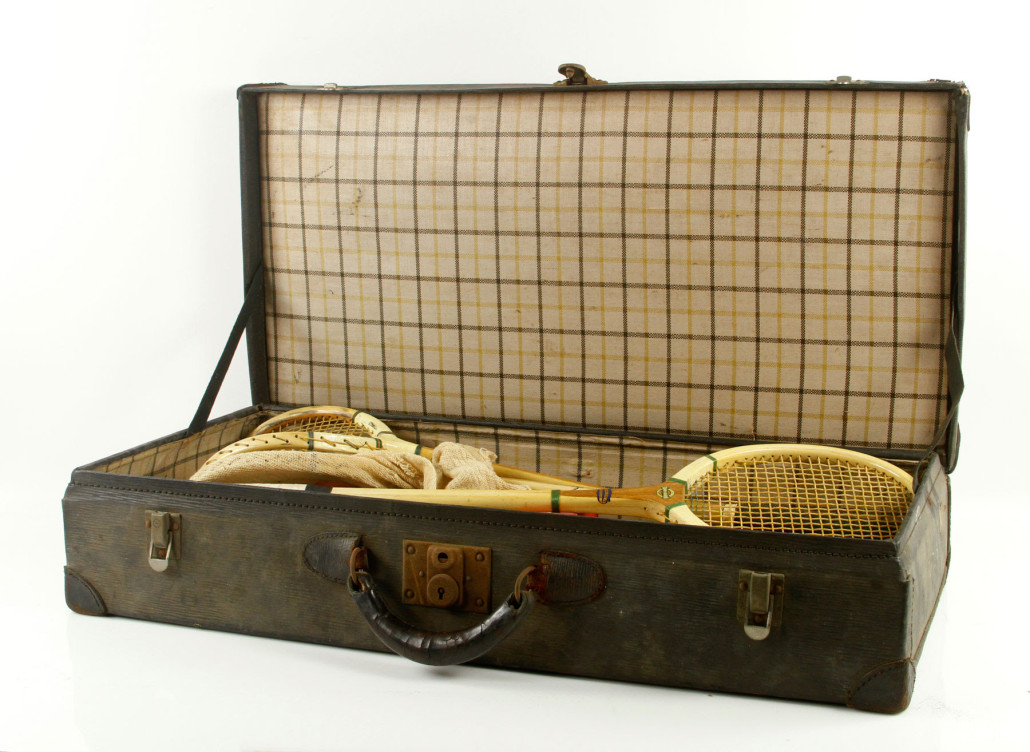 BEVERLY, Mass. – Kaminski Auctions held a two-day Spring Estate auction May 21 and May 22. Ephemera formerly from the collection of Eleonora Randolph Sears of Prides Crossing, Beverly, Massachusetts, and Palm Beach, Florida, was the highlight of day one and the collection was met with enthusiastic bidding from many numerous athletic organizations, museums and individuals.

Interest came from the International Tennis Hall of Fame, the United States Squash Association, various museums and local family members vying for a piece of history of one the leading woman athletes of the 20th century.

Sears was a prominent socialite from Boston’s North Shore and a great-granddaughter of Thomas Jefferson. Her athletic accomplishments included being an inductee of the International Tennis Hall of Fame in Newport, Rhode Island, the U.S. Show Jumping Hall of Fame, and she was the first female national squash champion, as well as coach of the U.S. Women’s International Squash Team. She was also, the first woman to play on a men’s polo team gracing the fields of the Coronado Polo Club in San Diego, California.

The collection included fascinating photos, prints and diaries of her life. All lots performed well, yet exceeding all expectations was a lot of five letters from John Singer Sargent with prints of a portrait Sargent did of Sears (below) and three letters from Isabelle Stewart Gardner, which sold for $6,600. A suitcase containing three squash racquets and a box of Wright and Ditson championship tennis balls belonging to Sears brought $9,000 and was the top lot of the collection. 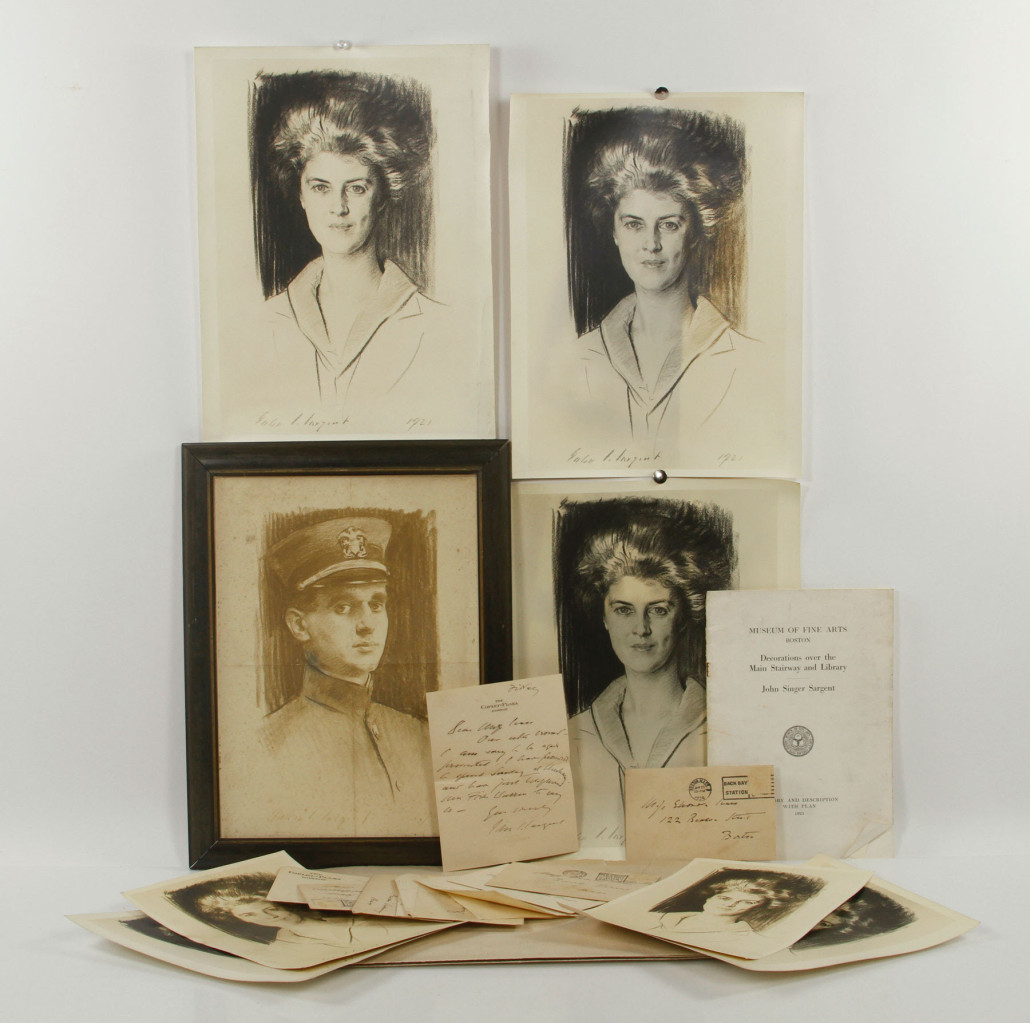 Lot of five letters from John Singer Sargent and two letters from Isabella Stewart Gardner to Eleonora Sears, with prints of a portrait Sargent did of Sears. Price realized: $6,600. Kaminski Auctions image

A travel photo album of Sears from the early 1900s consisting of a 183 photographs of her travels to Banff, Tokyo, Seoul, China, and India was hammered down at $3,120, while a photo album and diary of her brother Frederick Sears III’s trip to Greenland in 1899 bringing supplies to Lt. Robert E. Peary’s expedition sold for $2,520. A panoramic photograph of the Harvard vs. Yale football game from Nov. 25, 2011 sold for $2,400 while two 19th century engravings by John McRae, The Marriage of Pocahontas and John Burnet, Sir Walter Scott in his Study sold for $3,240.

An important abstract landscape by Claude Venard (French, 1913-1999), oil on canvas achieved $9,000 as anticipated and was the top lot of the day.

Chinese porcelain performed well on Sunday with a Chinese under glazed blue and copper red dragon moon flask (below) selling for $43,200, while a Chinese blue and white bowl brought $22,800. 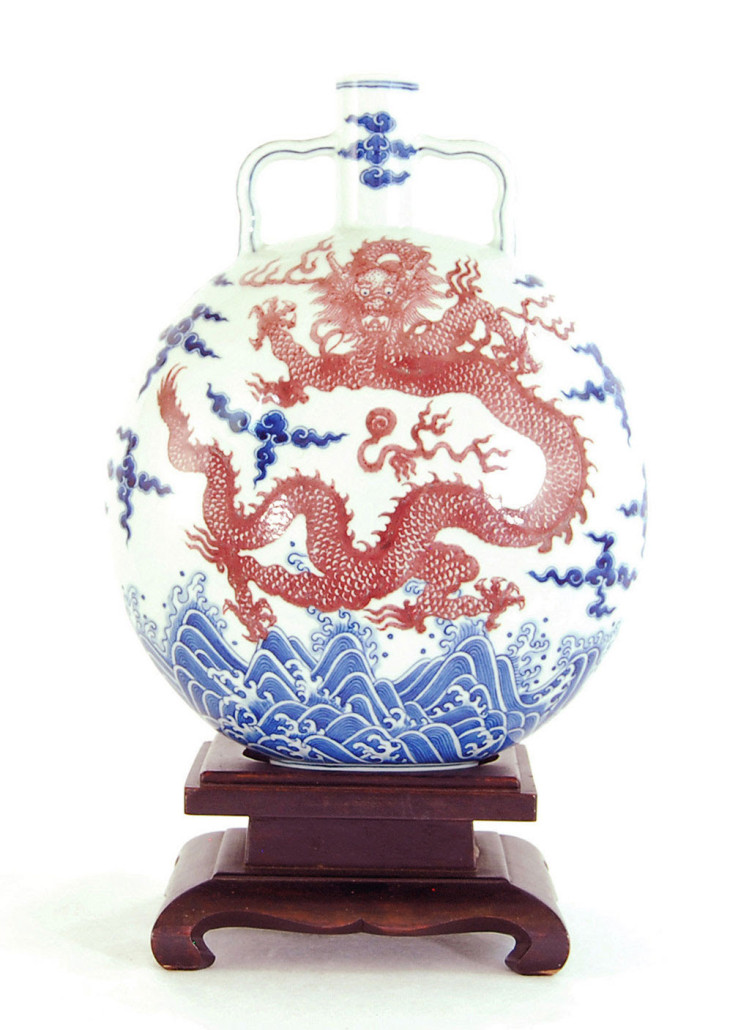 A determined floor bidder against the Internet pushed up the prices of several signed Tiffany Studios table lamps. A double poinsettia lamp realized $14,400 while a poppy-style lamp realized $12,000.

An important Lord and Goddard Hepplewhite tall clock ascended from the original buyer since 1819 realized $9,600. Similar examples are part of the Winterthur and Bennington Museum collections. This special clock was numbered #112 and had a moon phase dial. The clock, in excellent condition, measured 86 1/2 inches high and was complete with weights, key and pendulum.

Estate jewelry featured an 18K gold and diamond “Riveria” necklace. With 118 graduated round brilliant diamonds and a total carat weight of 18.30 CTW, measuring 16 1/2 inches long it sold for $16,800.