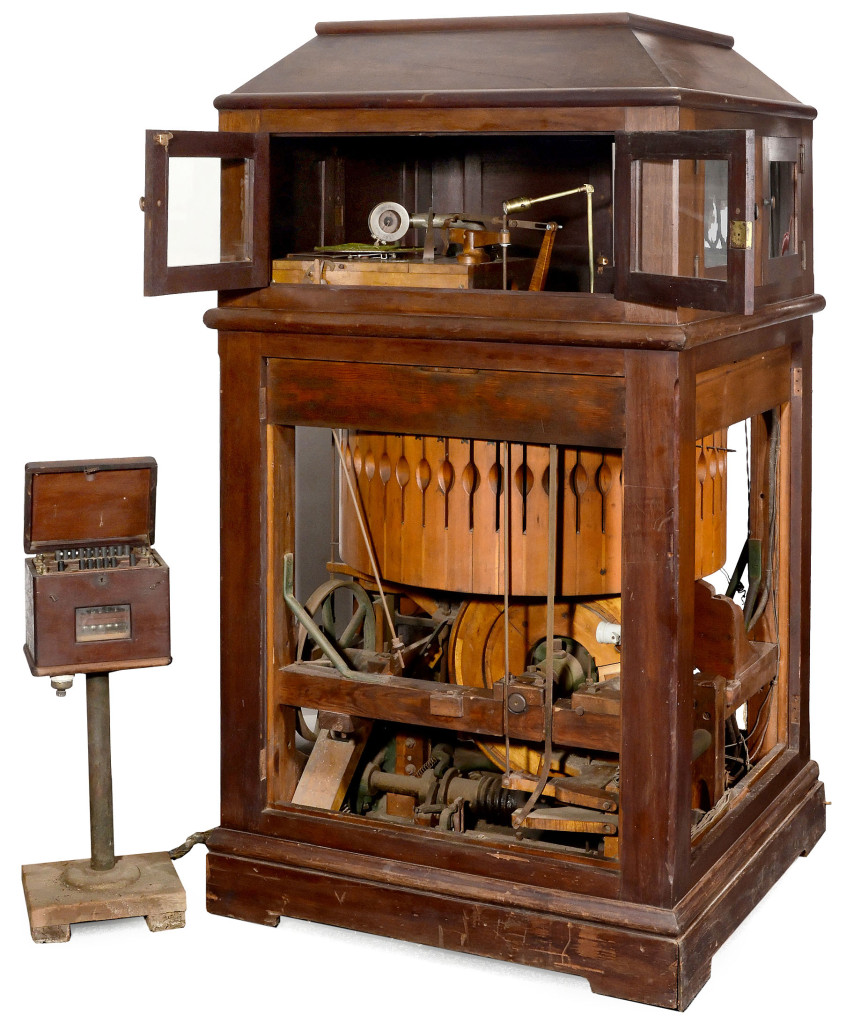 The Autofono, which sold at Breker for $130,800, is the only known surviving example of the first jukebox. Auction Team Breker image

COLOGNE, Germay – Auction Team Breker’s sale of Science & Technology, Mechanical Music and Antique Toys on May 21 featured an Autofono, a historic jukebox forerunner by one of the unluckiest of American inventors, Oberlin Smith (1840–1926) of Bridgeton, New Jersey.

Smith’s career began with the incorporation of the Ferractute Machine Co. for sheet-metal presses in 1877. As a leading supplier of stamped metal components, Smith rubbed shoulders with inventors such as Thomas Edison and Alexander Graham Bell, however it was his work as a pioneer of magnetic technology that nearly earned Smith a place in the history of recorded sound.

After seeing a demonstration of Edison’s newly invented tinfoil phonograph in 1877, Smith began experiments in sound recording and reproduction. Less than a year later, he had discovered how to store sound waves on silk thread impregnated with metal powder – the earliest form of magnetic recording. Unfortunately, though, Smith filed only a caveat – and not a patent – for his invention, allowing the Danish engineer Valdemar Poulsen (1869-1942) to make modifications to the earlier design and then claim magnetic recording as his own invention in July 1899.

Despite his disappointments in the field of recording, Smith did not give up his experiments. On Dec. 29, 1921 he filed a patent application for an ‘Automatic Phonograph’ that could be operated remotely from any room in the house. Once more, Smith had anticipated an important invention, this time the jukebox, more than a decade before it became a commercial reality. Once again, however, he was not to receive credit for his breakthrough. Smith died in 1926, the same year that his patent was finally granted. In a final piece of misfortune, one of only two Autofono prototypes was destroyed in a fire at the inventor’s home in 1934.

The Autofono sold at Breker (above) is the only known surviving example of the first jukebox and, although in need of restoration, it surpassed expectations to bring an impressive 116,800 euros ($130,800).

Another first was the Malling-Hansen Writing Ball, the earliest form of typewriter. The Rev. Malling-Hansen, principal of the Royal Institute for the Deaf and Dumb, Copenhagen, designed his unique ergonomic typewriter in 1865 to help his students to “speak with their fingers.” A fine example of Malling-Hansen’s Writing Ball (below) sold for 123,000 euros ($137,750) at Breker’s auction. 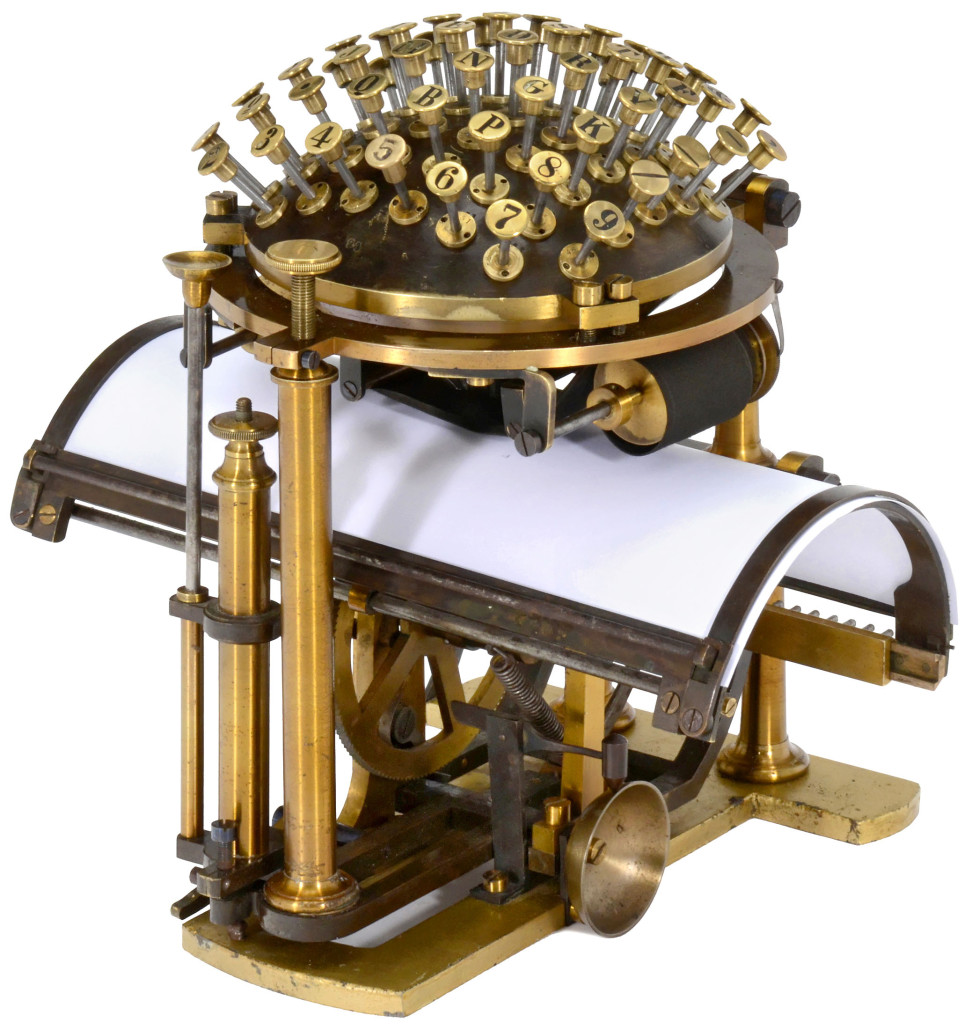 The Writing Ball was not nearly so successful as the ‘Sholes and Glidden’ brought out by E. Remington & Sons of Ilion, New York, in 1874. The Remington firm drew on its success in the manufacture of sewing machines when decorating the new typewriter with floral transfers and miniature vignettes that appealed to a female clientele. The first truly commercial typewriter, the Sholes and Glidden revolutionized office communication, paving the way for a new female workforce. A well-preserved example at Breker’s auction (Lot 148) brought 29,500 euros ($33,000).

From WWII to the Cold War, the so-called Russian Enigma, the Fialka “M-125-3” cipher machine (below), was introduced in 1956 for countries in the Warsaw Pact. After the fall of the Berlin Wall in 1989 and the collapse of the Soviet Union, the remaining machines were recalled and dismantled. A rare survivor at Breker’s sale (Lot 39) brought 9,200 euros ($10,300). 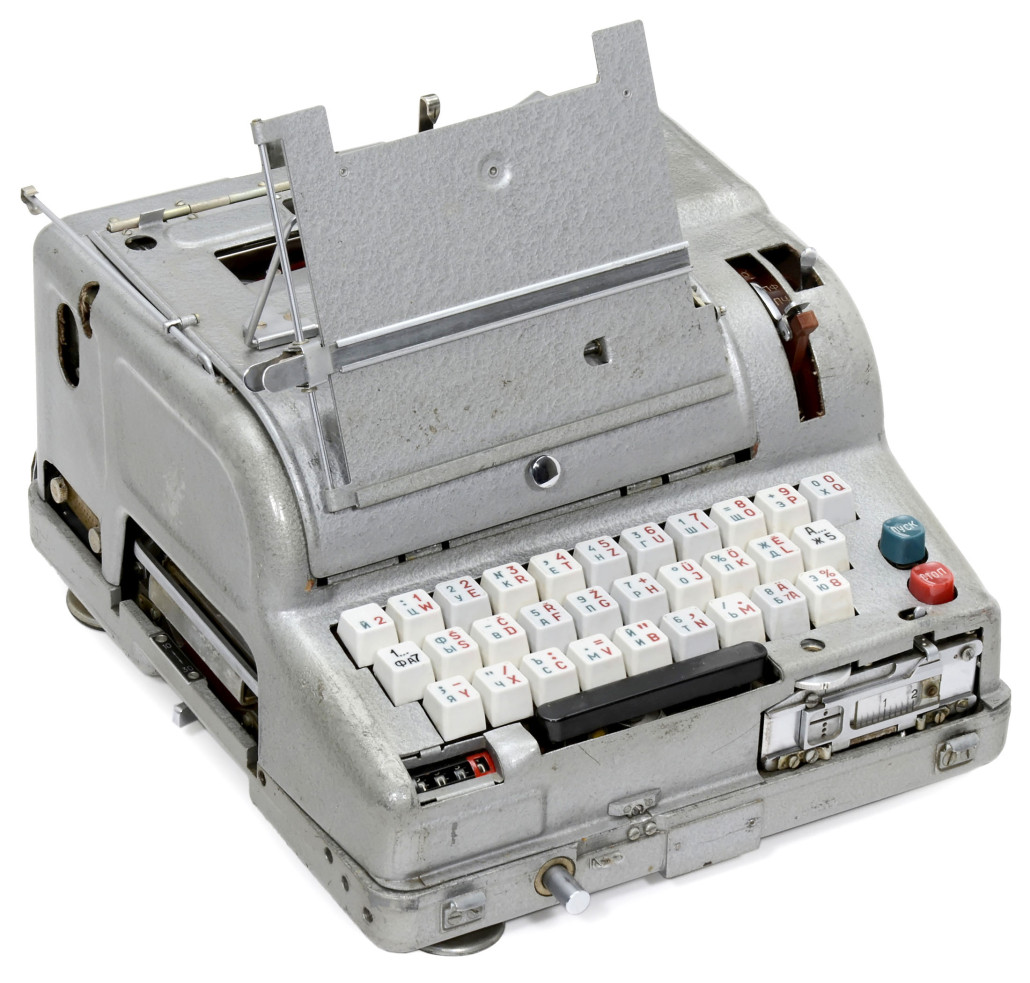 Not all of the machines in the auction, however, were purely functional. A collection of mechanical music instruments, ranging in size and scale from the modest to the magnificent, was designed to entertain.

The top lot in the section, a rare auto-change disc musical box by Symphonion Musikwerke of Leipzig (below) represented a sophisticated form of home entertainment system when new. More than 100 years later, it still commanded a strong price at 39,350 euros ($44,000). 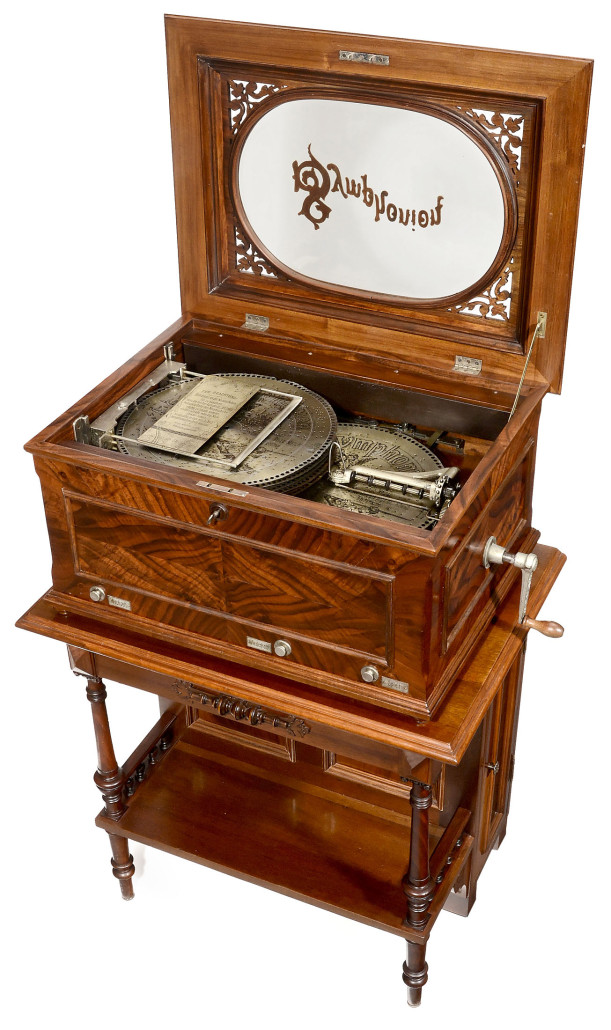 Artificial life was not limited to Switzerland. Parisian maker Blaise Bontems was prolific in the creation of singing bird automata in cages. His oeuvre included a small series of ormolu and porcelain cages in homage to the work of the 18th century master Pierre Jaquet-Droz. Breker’s auction presented a particularly fine model decorated with Sevres porcelain panels (Lot 395) for 14,750 euros ($16,500). 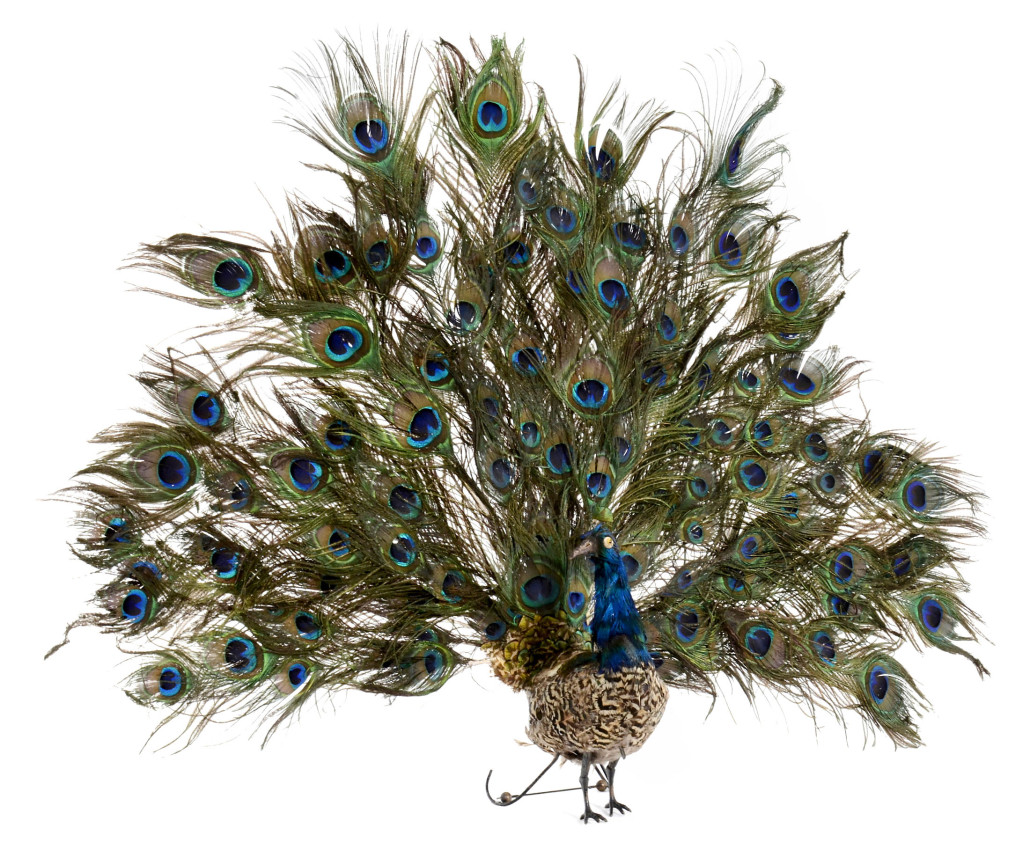 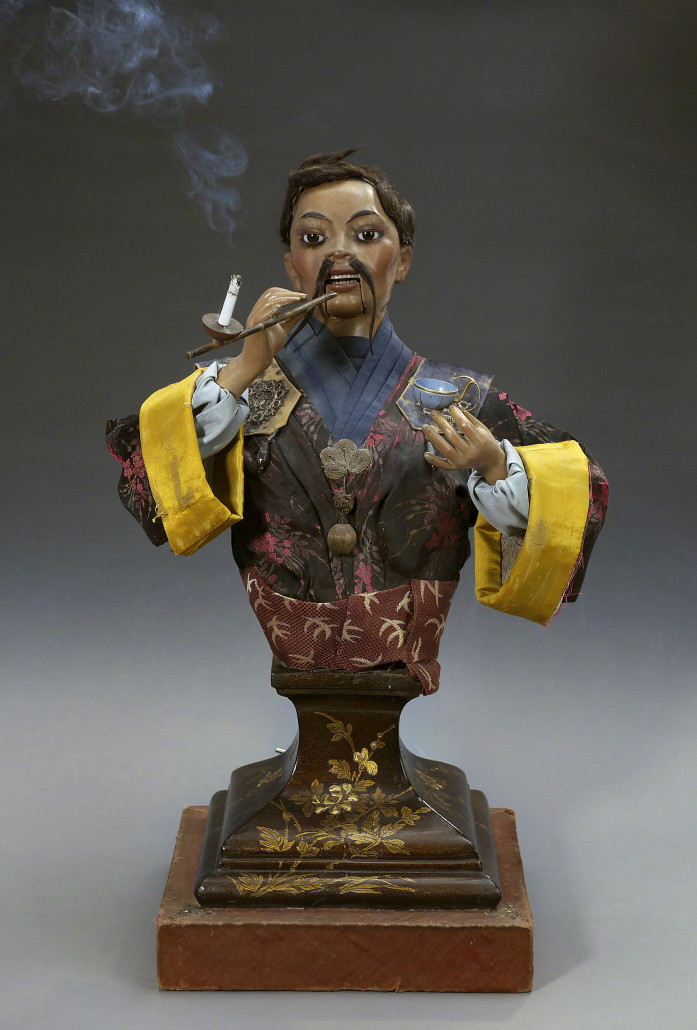 Mechanical marvels on parade at Breker auction May 21