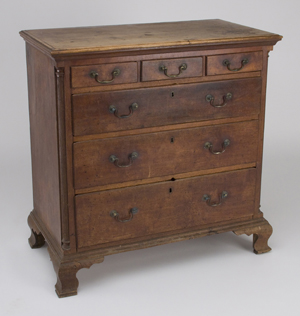 For the past decade the firm’s fall auction has had a special focus on material from Virginia and other Southern states, and this auction included one of the more impressive regional groupings that Jeffrey Evans and his team has assembled in recent years. Featured consignments to the auction included material from the estate of longtime Shenandoah Valley collector Dr. Jean Wine of Harrisonburg, Va.; possessions of a Loudoun Co., Va., family comprising items descended from renowned 19th-century thoroughbred race horse owner and breeder James Robert Keene (1838-1913); items deaccessioned by a Virginia institution; heirlooms descended in an early Pendleton County, (W.)Va. family; along with material from prominent Virginia, Maryland and Ohio private collections.

The broad range of fresh material offered resulted in a near capacity crowd throughout most of the day. Total in-house bidders numbered 250, another 160 absentee and phone bidders registered through the firm’s website, and more than 450 bidders participated through LiveAuctioneers, generating an additional 6,700-plus bids. Evans and his staff processed nearly 9,000 bids for the single-day auction.

The sale’s most coveted lot was an important Shenandoah Valley of Virginia Chippendale walnut three-over-three-drawer bureau attributed to the circle of Gideon Morgan (1751-1830) of Staunton, Va. The circa 1790 diminutive bureau – today commonly referred to as a chest of drawers – stood only 39 inches high x 38 inches wide x 20 1/2 inches deep. It was in virtually untouched original condition with its only replaced elements being the brasses on the lower three drawers. The bureau also retained an historical and possibly original surface, an extremely rare feature that added immensely to its remarkable state of preservation.

The Shenandoah Valley bureau had been purchased at an on-site estate auction in Rockbridge Co., Va., in 1999 by an agent for collectors John and Lil Palmer of Purcellville, Va., and had resided in one of the Palmers’ bedrooms until they consigned it with Evans. Before the auction Evans commented that not since his firm sold the now famous Johannes Spitler decorated cupboard in 2004 had he entertained so many requests for early preview of a specific lot.

“Everyone that inspected the bureau absolutely loved it,” Evans remarked.

The bidding quickly surpassed the $10,000-$15,000 estimate with numerous in-house bidders participating. At the $30,000 level the bidding was between an advanced Virginia collector and a representative of a prominent Virginia museum, with the collector finally prevailing at $48,875. All prices quoted here include a 15 percent buyer’s premium.

After the auction Evans said that he had been trying to persuade the Palmers to let him sell the bureau since they acquired it in 1999, relating that “John, who is an advanced collector of Virginia pie safes, always said if it would bring enough to buy a great safe or two he would let it go, and well you can guess the rest of the story.” Evans added, “The bureau’s outstanding condition, the rock-solid attribution that we were able to build, and the fact that it was sold unreserved, all greatly contributed to the strong interest and final price the bureau achieved.”

Other Virginia furniture that drew abundant interest and aggressive bidding included a rare signed Presley Cordell (1779-1849), Leesburg, Va., walnut tall-case clock from the collection of Leah and the late Bill Pollard of Purcellville, Va. The stately circa 1800 timepiece, which stood 103 inches high, was in outstanding running condition and sold to a Virginia phone bidder for $25,300. A fine circa 1840 Pendleton Co., (W.)Va. cherry child’s chest of drawers featured carved and turned ornaments and was signed by cabinetmaker Adam Waggoner (1807-1885) of Pendleton County, Va. This finely constructed diminutive chest measured only 24 inches high and 18 inches wide and had survived in near pristine original condition. It quickly surpassed its $3,000-$5,000 estimate selling for $10,350. Another Virginia piece acquired by an out-of-state buyer was an exceptional walnut diminutive sideboard pie safe set with 10 finely punched tulip tins and featuring a bold cutout gallery. This little jewel was only 38 inches high x 55 1/2 inches wide and retained its original black surface and remnants of blue paint on the tins. It was made around 1860, probably in Greene or Madison counties, and sold for $8,625 to an Internet bidder from Missouri.

A large selection of Virginia country accessories crossed the block including two exceptional Valley of Virginia painted white oak splint baskets from the Pulaski/Craig/Giles Co. area. The first (lot 82) was a finely woven diminutive example retaining its original dry red wash and measuring only 3 inches high at the rim. The second larger example (lot 83) stood 6 1/2 inches high at the rim and displayed an original dry, blue painted exterior and green painted interior. Each dated to the late 19th or early 20th century and sold for $3,737.50 against an $800-$1,200 estimate.

The fine art section of the auction was also led by a Virginia-related work. A well-documented Charles Balthazar Julien Fevret de Saint-Memin (French/American, 1770-1852) chalk on paper portrait of Dr. Amos Newhall (1773-1835) of Essex County, Va., drew much interest. The likeness had been drawn in Richmond around 1807 or 1808 and was still housed in its original 26-inch x 19 1/2-inch gilt and gesso frame with eglomise painted glass. It was first published by Ellen G. Miles in her 1942 seminal catalogue raisonne, Saint-Memin and the Classical Profile Portrait in America, p. 361, and later on page 821 of the June 1966 issue of the periodical, Antiques. The abundance of historical information that Evans compiled for the portrait, including provenance dating back to the 1920s, undoubtedly contributed to the work tripling its low estimate to sell to a Maryland phone bidder for $14,950 (lot 281).

A number of Virginia prints and maps were highlighted by a fine hand-tinted lithograph image of Natural Bridge in Rockbridge County after Edward Beyer (1820-1865). Taken from Beyer’s renowned Album of Virginia published in 1857, the example offered by Evans was in excellent condition and displayed strong colors. A determined phone bidder and an Internet bidder battled until it sold at $6,325 (lot 259), establishing a record price for a Beyer print.

The auction also included a highly important group of silver horse racing and polo trophies won by and descended from James Robert Keene (1838-1913), a renowned 19th-century thoroughbred owner, breeder, and winner of six Belmont Stakes. The top lot of the group was a Whiting Manufacturing Co. two-handle trophy awarded in 1883 to Spendthrift, one of Keene’s Belmont Stakes winners. The handsome 11-inch-high prize weighed in at nearly 60 troy ounces and sold for $10,350 (lot 520) to an elated in-house bidder.

A collection of antique firearms assembled by Dr. Joseph E. Gardner of Harrisonburg, Va., included a Second Model Virginia Manufactory flintlock pistol marked “RICHMOND / 1813” and “VIRGINIA” on the lock plate. Despite a replaced frizzen and part of the hammer, the relic realized $6,900 (lot 483).

Other auction material of note included a complete set of 13 Royal Doulton “Soldiers of the Revolution” figures issued in 1976 and limited to only 350 sets (lot 246, $10,925); a group of Shenandoah Valley domestic earthenware, much of which had been exhibited at the Washington County Museum of Fine Arts in Hagerstown, Md., including five polychrome-glazed pitchers ranging from 6 inches to 10 inches high (lots 11-15, $1,380 to $2,300); a collection of American Rockingham-glazed pottery highlighted by a signed Bennington Toby-form 4 1/4 inches high snuff jar in near mint condition (lot 590, $1,725); and a labeled “Ideal Bookcase Unit” by Globe-Wernieke Co., Grade 598, mahogany three-stack barrister bookcase with a lower drawer and original beveled glass (lot 447, $2,875).

Reaction to the auction from firm-president and auctioneer Jeffrey Evans was upbeat. “While there are still a tremendous number of fabulous bargains to be found in the current antiques market, especially in the furniture sector, we are encouraged by the large increase in the number of bidders participating in our auctions. One of the big keys to our success is that we are able to secure desirable, fresh material for each auction, 99 percent of which is unreserved, and present it with very attractive presale estimates that reflect the current market trends.” Evans added, “We choose not to fill our sales with well-traveled shop-worn merchandise protected by unrealistic reserves.”

Asked to expound on the current state of the American antiques trade, Evans offered, “It remains a buyer’s market – what something sold for five years ago or a decade-old appraisal value are no longer relevant in today’s economy. Well-cataloged, regional material in good condition continues to sell for solid prices when it carries a conservative estimate, while generic Americana is drawing very little interest at present. Today’s collectors seem to focus more on objects that display social or historical importance within a specific region or culture. The all-embracing antiquarians of years past who collected primarily by form and function are no longer driving the market. Because of this, the majority of general-line material is now selling at less than secondhand store prices. This presents a great opportunity for someone to furnish a home with nice antique furniture for pennies on the dollar compared to what it would have cost five or ten years ago.” 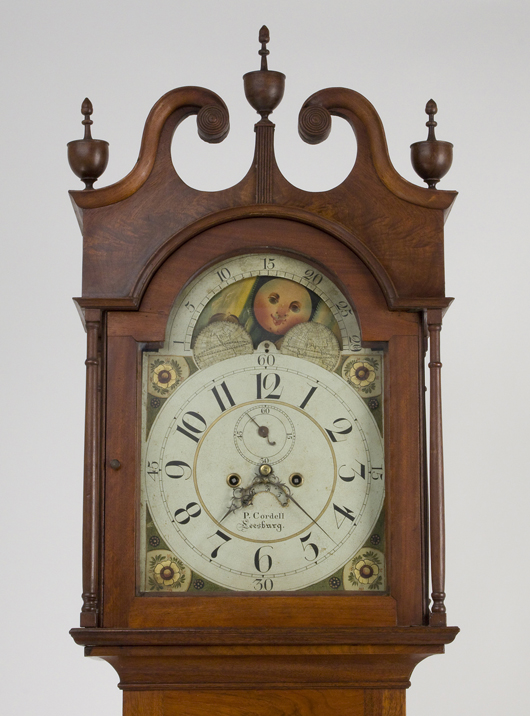 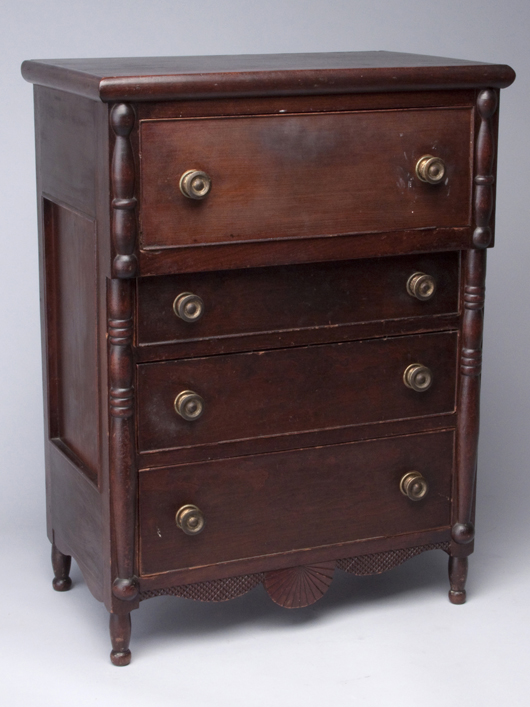 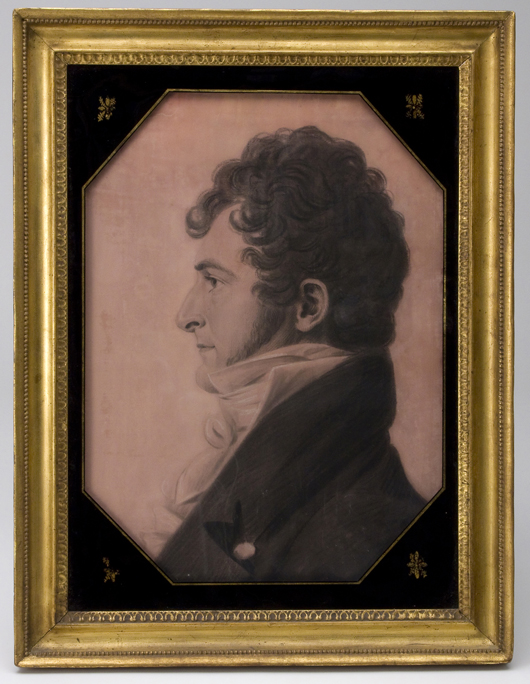 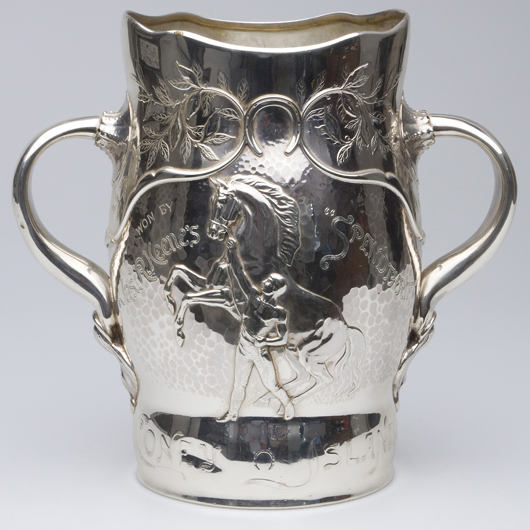 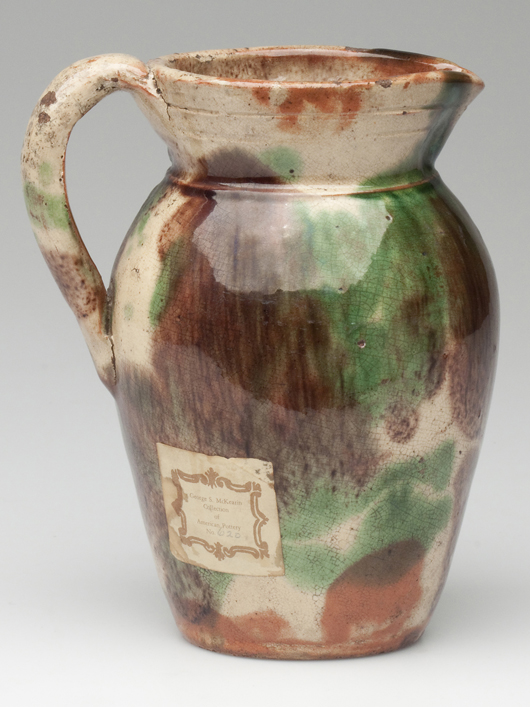