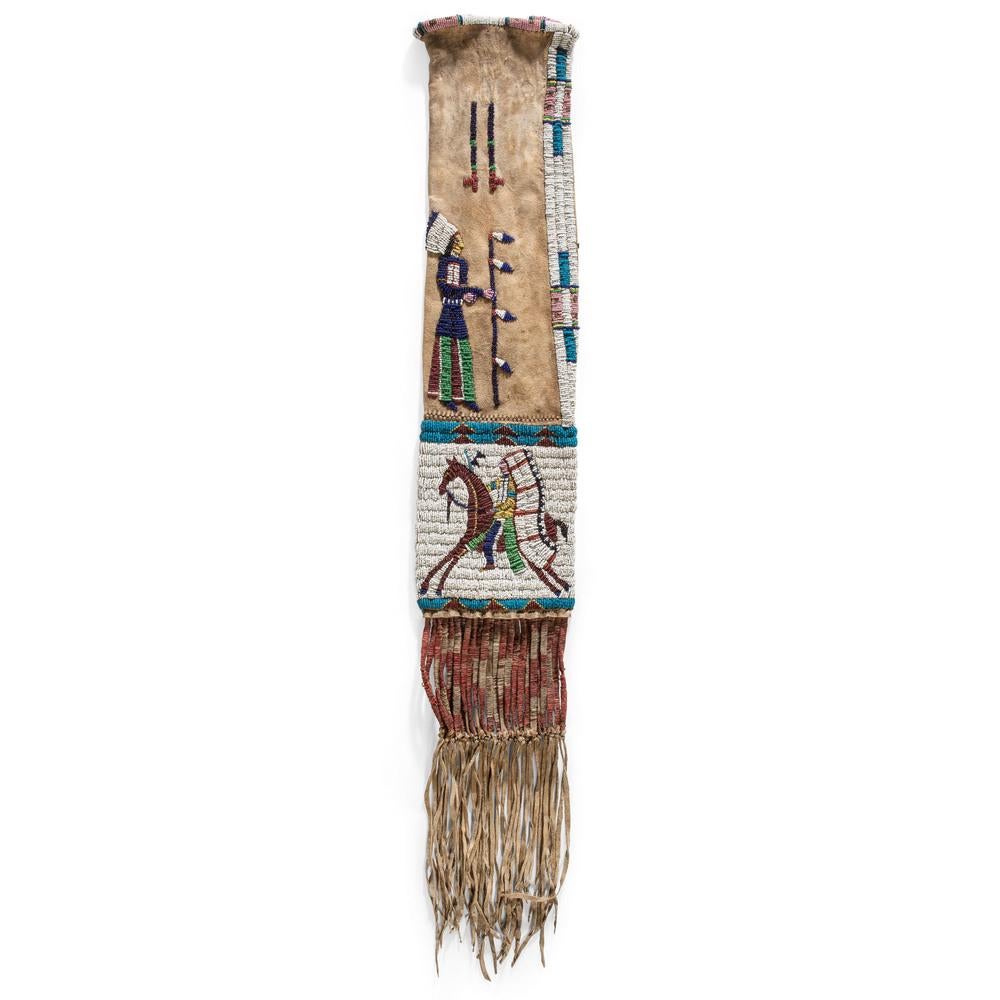 CINCINNATI – This September, Cowan’s Native American, Prehistoric & Tribal Art department paired an auction record sale price with the repatriation of a sacred figure to have perhaps its most meaningful month ever. “Months like this make all the blood, sweat, and tears worth it,” said Danica Farnand, the department’s Director and Senior Specialist. “To not only serve our consignors but to help the Zuni recover a long-lost god, that is really something special.

Years after being removed from an ancient tribal shrine, a sacred, hand-carved wooden figure was returned to the Zuni Pueblo in New Mexico. The 15-inch figure, which is believed to be the living embodiment of a War God, or Ahayu:da, in the Zuni religion, was found in an Ohio estate that was consigned to Cowan’s Auctions. Farnand recognized the figure and immediately began the process to facilitate its safe return. With the help of Robert Gallegos of the Authentic Tribal Art Dealers (ATADA), the War God was returned to tribal authorities in late August.

“The Zuni recognize the War Gods as living beings, and their removal from the shrine where they live represents an affront to Zuni cultural traditions. The War Gods are sacred beings that deserve to be at rest. When I explained to our consignor their significance to the Zuni, they were happy and eager to return him to his home,” said Farnand.

Each winter, members of the Zuni Deer and Bear clans carve two figures known as Big Brother and Little Brother. The twin gods are then ceremonially brought to a shrine on a mountain on tribal lands where they are left to return to the elements. This act is believed to protect not only the tribe, but the earth itself.

“The Zuni Tribe is grateful for the partnership and efforts of Robert Gallegos, ATADA, and Cowan’s Auctions to see the return of this Ahayu:dah. Since 1978, the Zuni Tribe has taken an official position to see the return of our Ahayu:da for the protection and well-being of the entire world. Zuni, and many other tribes, continue to face difficulties in seeking the return of sacred cultural items held in private hands and collection worldwide. We look forward to developing and strengthening our partnership with ATADA. Elahkwa/Thank you,” said Lt. Governor Carleton R. Bowekaty, of the Zuni Tribe.

Almost as soon as they were discovered by anthropologists in the late 19th century, Ahayu:da have been illegally removed from the shrine where they were originally placed. Over the years, an untold number were removed and found their way to museum and private collections, both in America and Europe. In recent years, the Zuni have made a concerted effort to repatriate these stolen War Gods, recovering more than 100.

The War God found in Ohio by Farnand had been part of a collection of a traveling side-show or dime museum focusing on American Indian artifacts, which operated in the Southeastern United States during the 1930s and 1950s.  Its long-deceased owner, a man who claimed he was a Cherokee tribal member from Oklahoma, died with no immediate family and left the contents of the side show to a friend and fellow collector in Ohio. It was in this friend’s estate that the War God was found.

In recent years, sovereign tribal nations throughout the United States have expressed their concern over similar objects in institutional and private collections. While Federal laws regulate native objects curated by public institutions, those in private collections are outside the scope of these laws. “Most auction houses recognize the sensitive nature of sacred objects” said Farnand. “This return of the War God is not the first Cowan’s has been involved with. In recent years we have also facilitated the return of a number of religious masks and other objects that should never have left their people.”

“I was delighted to serve as an intermediary in the return of this important sacred figure,” said Gallegos, a long-time tribal art dealer in Albuquerque, New Mexico and a board member of ATADA.  “ATADA is committed to continuing to working with tribal elders and religious leaders and with private collectors and dealers to help repatriate sensitive cultural property. In the past few years we have helped return over 300 similar artifacts to various Native American tribes and Pueblos. Through these efforts we hope to establish a level of trust between all parties that will go a long way towards resolving these issues of cultural patrimony.”

A beaded hide tobacco bag from the Sioux Elk Dreamer Society (Lot 182) sold for an auction record of $131,250 against a presale estimate of $50,000-$60,000 in Cowan’s September 18 American Indian Art Auction. The bag was the most anticipated lot from the collection of long-time respected dealer Robert Jerich. 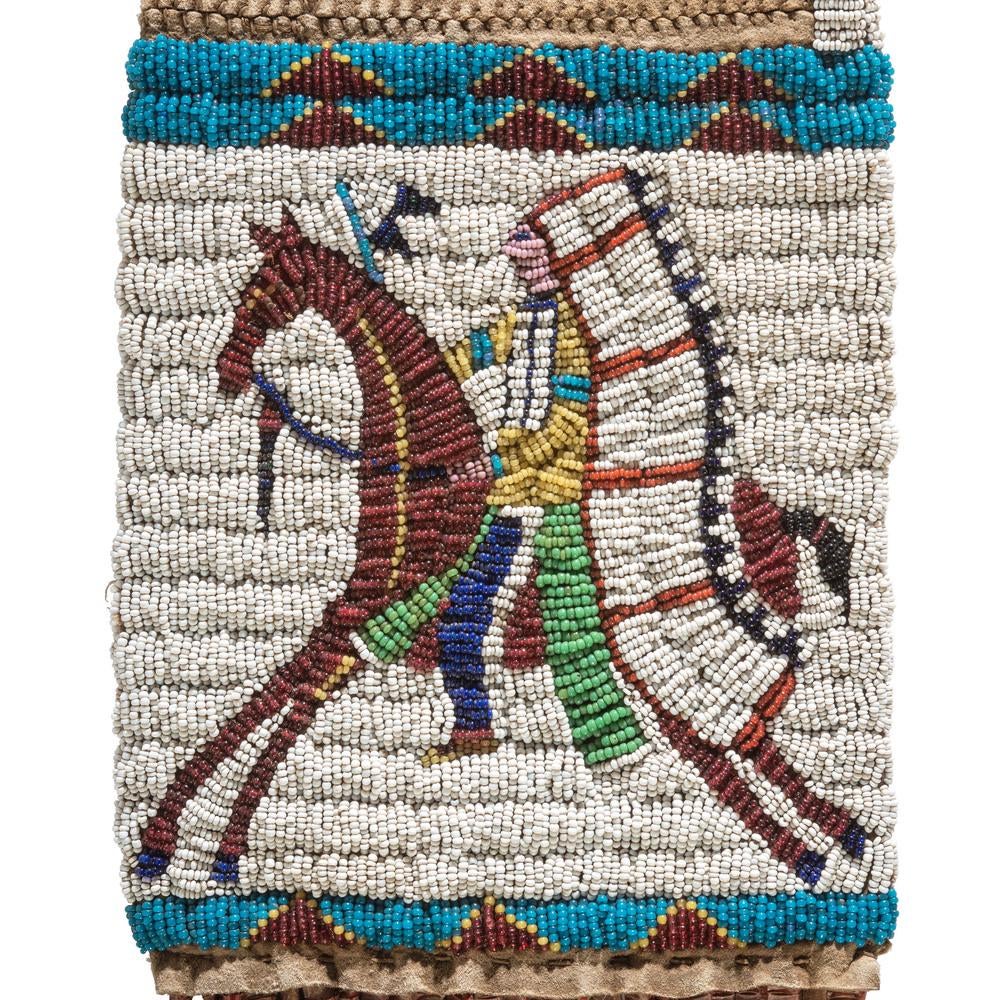 “I have known Mr. Jerich for the entirety of my career and while we have crossed paths many times, it was a joy to finally get to work together with him to bring so many remarkable pieces to market,” said Farnand. “The second I was able to examine this bag I knew that there was nothing that could compare to it. Clearly, buyers agreed with me.”

The late-19th century bag is sinew-sewn and beaded in colors of navy blue, light green, candy apple red white-heart, pink red white-heart, greasy blue, greasy yellow, translucent red, light pink, faceted brass, light blue, black, and white. One side of the bag depicts a warrior dressed in a feathered bonnet holding a staff, a warrior on horseback, and two pipes. The opposite side also depicts two brightly colored pipes, along with a spotted elk with “power lines,” and the Elk Dancer with hoop and staff.

Two collections drove the September 18 auction well past its presale estimate of $1.1 million to a total of $1.5 million. In addition to the Jerich Collection, items from the Ohio Estate in which the Zuni War God was found fared extraordinarily well with many lots surpassing their presale estimate by leaps and bounds. The top lot of the estate was an exceptionally rare Ashiwi polychrome pottery jar (Lot 404) from the mid-18th century that sold for $68,750, beating its presale estimate of $40,000-$60,000. “I was floored when it got here; I had never seen anything quite like it,” said Farnand. “I guess that was a pretty good clue just how rare it was.” 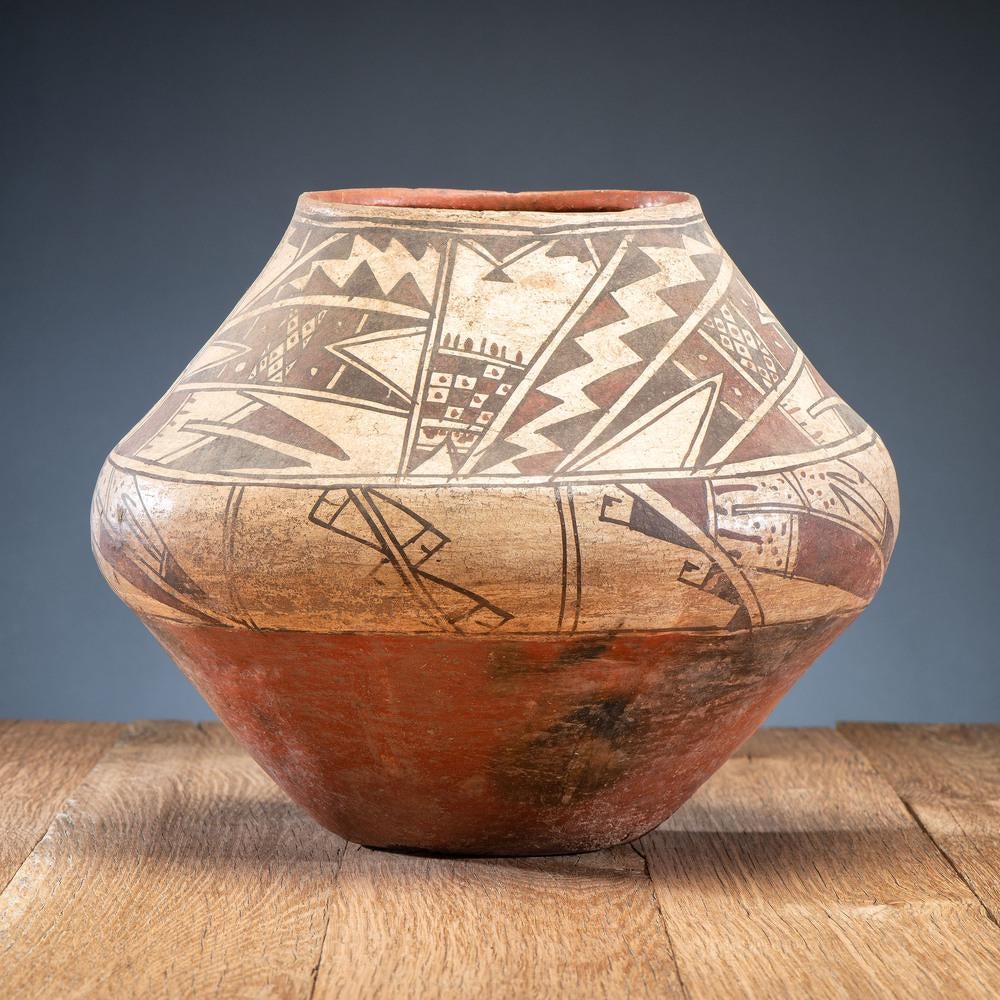