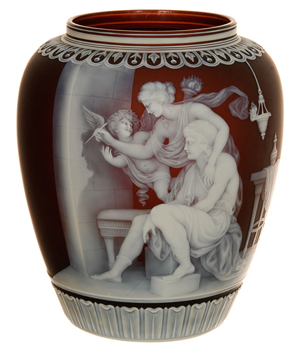 WICHITA, Kan. – A finely carved English cameo art glass vase by Thomas Webb, 9 1/2 inches tall and boasting a figural rendering signed “G. Woodall 1887,” soared to $260,000 at Part 2 of the sale of the lifetime collection of porcelain and fine art glass gathered by the late Dr. Ernest Rieger and his wife Karin, held May 29.

The auction was conducted by Woody Auction of Douglass, Kan. It was the highest price ever paid for a single item at a Woody Auction sale – no small feat considering the firm has been conducting auctions in the Midwest for decades. The firm also conducted the Part 1 auction, which grossed $1.3 million.

Part 2 did even better, grossing $1.8 million, helped along, of course, by the museum-quality Webb vase, which carried an estimate of $50,000-$100,000. “We knew we had something special, and we fully expected it to reach and surpass $100,000, but when it climbed as high as it did, we were just astounded,” said Jason Woody of Woody Auction. “But it truly is a remarkable vase.”

Thomas Webb & Sons was founded in England in 1842. It was known for the high quality of its cameo glass. The example in the auction had been pictured in the book English Cameo Glass by Grover. Woodall’s figural depiction was titled The Origin of Painting. The vase was signed by both Webb and Woodall. The buyer was a collector from West Virginia.

“Even though the top lot was a piece by Thomas Webb, it was the Tiffany people who really drove this sale,” Woody said. “They hadn’t seen such high quality glass come available in a long time. And the audience was literally worldwide. We had a Japanese man and his secretary fly in just for the auction, and he ended up spending $50,000. Many bids poured in from the UK, too.”

By day’s end, 432 lots had come up for bid and found new owners (it was an absolute auction; everything sold, regardless of price). About 150 people attended the event in person; around 95 of those held bidder numbers. Another 850 registered to bid online via LiveAuctioneers.com. Bids were fielded from as many as 45 countries, and many absentee (or left) bids were recorded.

Following are additional highlights from the auction. All prices quoted are hammer. There is no buyer’s premium at a Woody Auction.

Two lots tied for runnerup honors, at $45,000 each. One was another Thomas Webb & Sons English cameo art glass vase, signed “G. Woodall.” The 8 1/2 inch vase had a blue background with carved white opal overlay featuring a young lady and a bird. The other lot was a 17 1/4-inch-tall signed Tiffany art glass vase with a beautiful red body and green iridescent decorated neck.

Right behind, at $44,000, was an outstanding 13 3/4-inch signed Tiffany Favrile decorated vase with a superior red iridescent body having a Tel-El-Amarna Egyptian decorated foot and neck. One other lot cracked the $40,000 mark – yet again, a Thomas Webb unmarked 8 1/4-inch gem cameo art glass English cameo vase, with a Woodall scene titled Mischief. It went for $41,000.

A 37 1/2-inch signed Moser two-part pedestal vase – the finest piece of Moser that Woody Auction has ever offered – featuring a yellow opaque background with extensive multi-color leaf and applied acorn décor, climbed to $38,000. Also, a 25 1/2-inch by 20-inch marked KPM porcelain plaque – the largest KPM porcelain plaque Woody Auction has ever offered – with an outstanding scene featuring The Sacrifice of Jephthah’s Daughter, set in a gilt wooden frame, gaveled for $15,000.

A rare 4-inch signed Tiffany Favrile red paperweight vase, bulbous in shape and identical to the example featured in Art Glass Nouveau by Grover, breezed to $36,000; and a 14 1/4-inch signed Tiffany Favrile paperweight art glass vase having a clear background with an orange blossom and green floral stem décor (also as seen in Art Glass Nouveau) rose to $25,000.

A signed Tiffany Favrile art glass footed vase with a beautiful red body and foot with decorative iridescent band around the neck made $31,000; and a 9 3/4-inch-tall signed Tiffany art glass vase having a yellow-green background with iridescent gold and green leaf and vine décor, earned $32,000. Also, a cranberry opalescent art glass oval footed vase, 8 1/4-inches tall and having a fantastic enameled and beaded tapestry coralene decoration of a peacock, commanded $3,000. 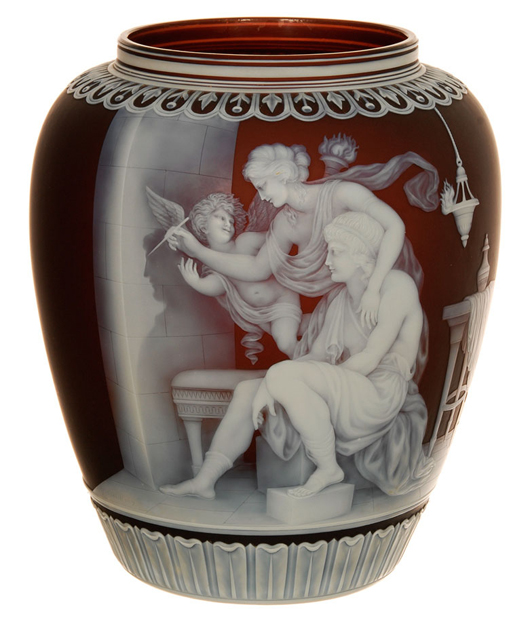 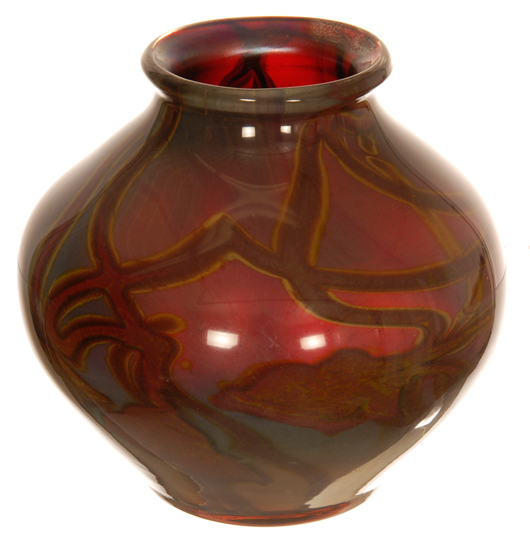 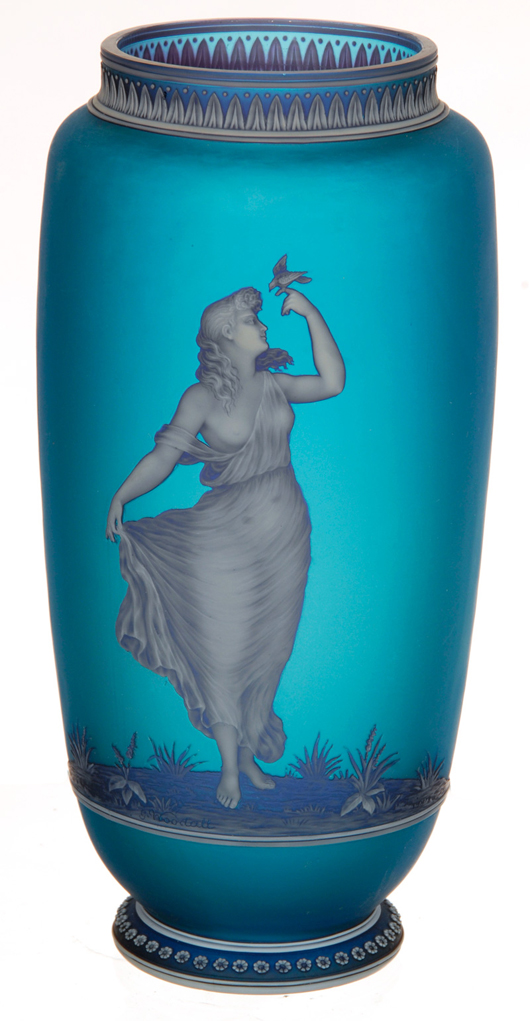 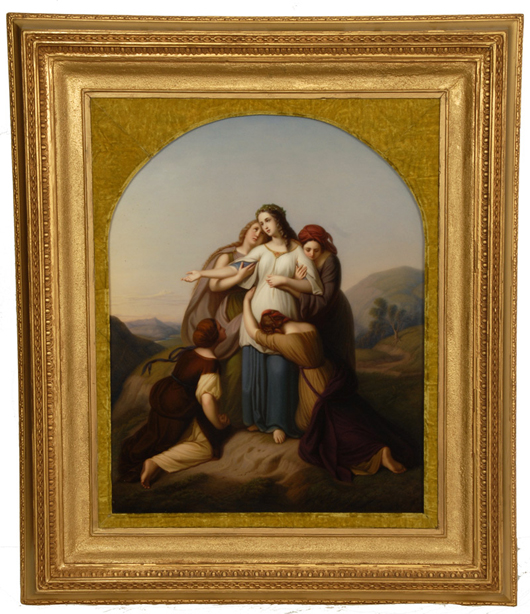 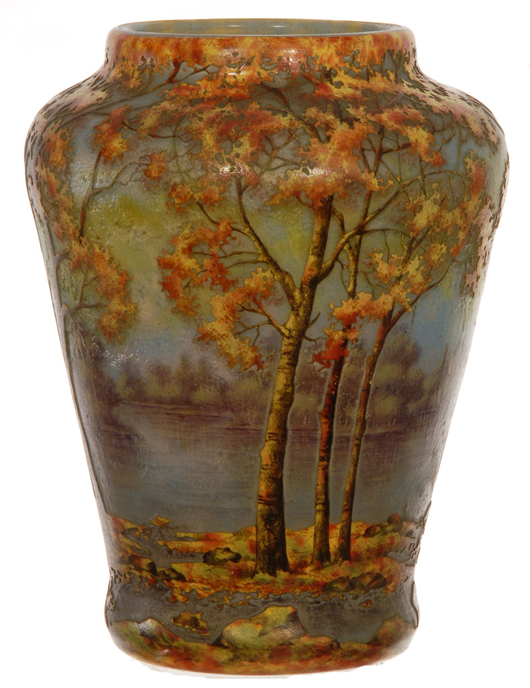