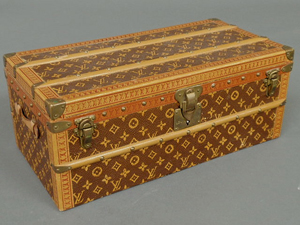 LUDWIG’S CORNER, Pa. – Ted Wiederseim, Auctioneer held an exciting two-day sale at Griffith Hall, Ludwig’s Corner, Pa., on February 26-27 as a huge nor’easter bore down on the East Coast and threatened to postpone the sale. Miraculously, the storm chose another path. What was supposed to be 12 to18 inches of fresh snow only amounted to a third of that, and the sale went on as scheduled with standing-room-only crowds and heavy Internet bidding through LiveAuctioneers.com on both days.

The sale was loaded with quality smalls, redware and stoneware, Staffordshire, Delft, silver, antique guns, paintings and furniture. The Friday night session selling lots 1 thru 250, had a very German Christmas theme with Belsnickles, kugels, and other Christmas decorations. Many of the items came from the Estate of Gladys Lowa of Schwenksville, Pa., and the upscale Main Line suburbs of Philadelphia. A group of four grape-form kugels, the largest being five inches high, sold after very spirited bidding for $2,500 (all prices shown are on the hammer), while a lot of seven kugels brought $2,100. Yet another lot of nine kugels did $1,300. The late 19th-century belsnickles did equally well, with the best bringing $1,000.

Also on Friday night, a Dr. Daniels Veterinary Medicine oak display case made $2,000. Among the numerous lots of redware, a plate with “St. Fidelas Martyr” in slip decoration sold within estimate for $950. A set of German silver flatware marked “800” did $1,500; a circa-1920 cast-bronze stag-form lamp brought $1,000; and a rare Joslin’s tabletop globe sold for $2,300.

The highlight of the Friday evening session was a very well-executed oil-on-canvas painting of fishing boats by Samuel Hester Crone (American, 1858-1913), which sold on the phone to a relative of the artist for $7,000.

Saturday’s session brought both sunny skies and another packed house of enthusiastic bidders for the remaining 700+ lots. The offerings included a nice selection of Staffordshire figures, furniture, silver and pottery and also some unusual and interesting items such as a Wurlitzer Multi-Selector tabletop jukebox, which sold to an absentee bidder for $4,000.

The most notable of the Staffordshire lots included a rare black and white standing Cavalier King Charles spaniel, which realized $2,750; a standing figure of Ben Franklin, $1,300; a pair of lion spill vases, $2,300; and a pair of seated Maltese dogs, $3,000.

Although there were few lots of furniture, the pieces offered were very well received, with a Chippendale carved mahogany mirror with the maker’s label “John Elliot,” active 1775-1800, selling for $2,500, a rare Sheraton mahogany flip-top gaming table inlaid with an American eagle and rosettes, $5,250.00; a nice Queen Anne candlestand, $2,400; a Connecticut River Valley maple highboy, $5,500; a mahogany bookshelf cabinet with dentil molded cornice and glass doors, $3,750;  and an unusual bird’s-eye maple bow-front chest, the skirt with an inlaid bird, $2,500.

The Saturday session also included a large collection of signed Stahl pottery, perhaps the most unusual being a dish decorated with tulips and inscribed on the back with an extensive verse about America during World War II. Signed “G.S. Stahl, March 30, 1942,” it sold for $850. A very nice Tucker porcelain pitcher with overall gilt decoration brought $4,500 and a fine pair of Bristol-type vases with scenes of the Philadelphia Waterworks and area bridges realized $2,500.

Paintings continued to be strong, with a Carl Muller (Austrian 1862-1935) oil-on-canvas harbor scene selling for $3,000. A beautifully gilt-framed Emil H. Meyer (American, 1863-) oil-on-canvas landscape of a woman standing at a fence sold for $3,000; a wonderful allegorical watercolor of Lady Liberty with an eagle soared to $6,000; and a very pleasing portrait of a young man in riding attire by Ellen Wetherald Ahrens also realized $6,000. A diminutive Walter Emerson Baum oil landscape, probably depicting Easton, Pa., and retaining its original exhibition label sold within estimate for $2,750.

Consignments are now being accepted for Wiederseim Associates, Inc.’s May 8, 2010 cataloged sale, with Internet live bidding through LiveAuctioneers.com. On May 22, 2010, the company will conduct an on-site estate sale of property of Leonard E. B. Andrews, to be held at his farm “Ponder This” in Malvern, Pennsylvania. 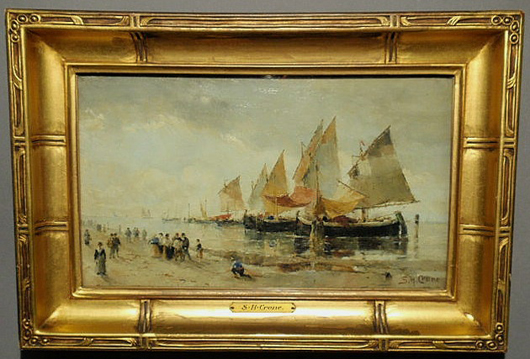 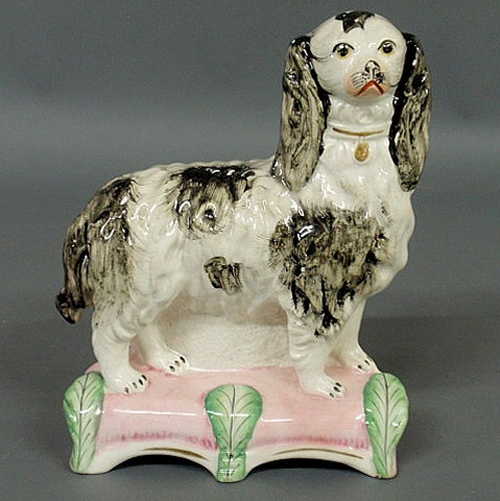 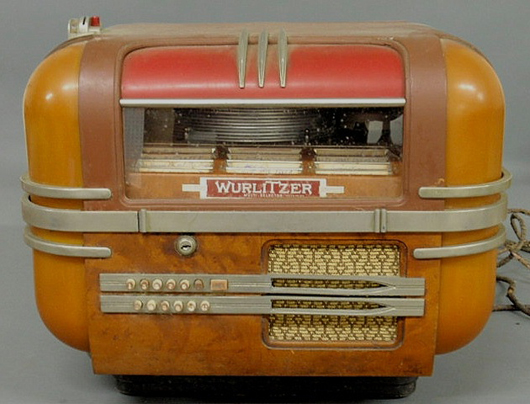 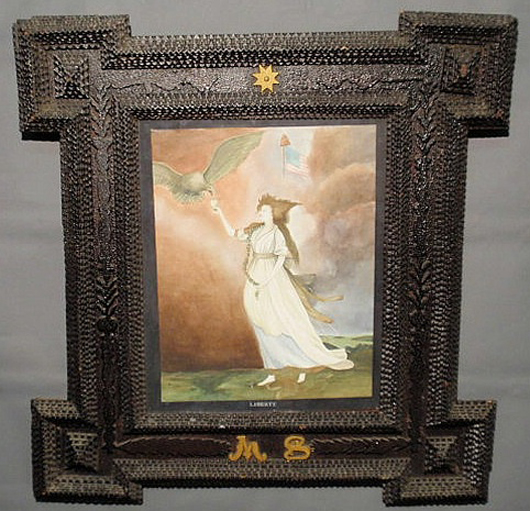