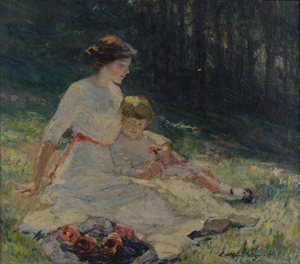 This oil on canvas of a mother and child, painted by Catherine Wiley in 1913 before her career-ending breakdown, sold to a museum for $107,880. The price was an auction record for a Tennessee female painter. Image courtesy of Case Antiques Auction.

KNOXVILLE, Tenn. – An Impressionist oil on canvas of a mother and child in a sun-dappled meadow fetched $107,880, a record auction price for a Tennessee female artist, at the Winter Case Antiques Auction held Jan. 28 at the company’s gallery in Knoxville. (All prices include the buyer’s premium). The painter was Anna Catherine Wiley (1879-1958), who became a tragic figure in the art world.

Wiley studied at the Art Students League in New York under Frank DuMond, and with Robert Reid, Jonas Lie and Martha Walter, before returning to her native Tennessee, where she helped establish formal art education at the University of Tennessee. A mental breakdown in 1926 is believed to have ended her painting career; she remained institutionalized until her death.

The high bidder was the Knoxville Museum of Art, which mounted a fundraising campaign upon learning of the painting’s existence and had to beat out competition from collectors and dealers in Tennessee, New York and Florida to win it.

“This is not just a great painting by a regional female artist—it’s a great American Impressionist painting,” said company president John Case. “This is one instance where an artist is disadvantaged by scarcity. If Catherine Wiley had been more prolific, her name would probably be mentioned today alongside her mentors when people talk about great American Impressionist painters.”

The auction drew unprecedented participation: over 2,000 bidders registered for the sale and approximately 200 of them attended in person.

There were other art records as well. A 19th-century landscape with hunting dogs set what is believed to be an auction record for Wilhelm Eilerts of Kentucky, selling for $9,280, and an oil on canvas of a ship on turbulent seas churned up $6,728, an American auction record for French marine painter Emile Maillard (1846-1926).

Featured in the 800-lot auction were more than 200 lots from the estate of Salli LaGrone, a well known dealer from Nashville, Tenn., and frequent contributor to Martha Stewart’s broadcasts and publications.

A complete 10-volume Octavo edition of John J. Audubon’s Birds and Quadrupeds of North America topped the books and documents category, finishing at $34,800. An 1862 letter from Robert E. Lee to Gov. Pickens of South Carolina rallied to $6,264, and an archive of letters and tape recordings related to James Earl Ray’s legal case in the assassination of Dr. Martin Luther King sold for $6,728. A late 19th-century folding pocket map of the Battle of Franklin brought $1,856, while an 1802 hand-drawn map of Georgia competed to $1,392.

Asian material continued to be in demand, with more registered bidders from China participating in the auction than from any other country of origin except United States and Canada. A pair of Famille Rose porcelain Buddha figures competed to $11,136 against a $350-$450 estimate, while a yellow ground bowl with raised floral design exterior and central peach decoration was picked off for $4,872, the same price as a carved hornbill snuff bottle hanging in a wooden stand. A small porcelain cup and saucer in solid robin’s-egg-blue brought $1,512, and a finely carved ivory netsuke in the form of a basket of fish brought $1,276. A white jade snuff bottle with carved basket-weave design earned $1,856 despite lacking a lid, while a pair of celadon jade belt hooks realized $1,508 and a Mughal style jade teapot served up $1,160.

Furniture lots included a heavily refinished Hepplewhite-style Middle Tennessee sugar chest, $3,712, a Sheraton-style cherry sugar chest with turned legs, $2,900, and a miniature (6 1/2 inches tall) sugar chest form box in original surface which brought nearly as much at $2,320. A Tennessee candlestand with tilt top over a birdcage pedestal competed to $3,480, and a North Carolina painted box whose construction from a single piece of wood suggested attribution to the Swisegood School realized $2,320. A pair of round mid-century modern Dunbar nightstands with walnut veneer and brass-tacked, cream vinyl coverings rested at $1,508, while a lot comprised of a Dunbar walnut-veneered chest of drawers and gentleman’s cabinet closed at $1,160.

Other notable lots were a Masonic gold medal with 1839 inscription, $3,248, and a relief decorated Masonic watch fob, $1,276; a pair of 19th-century Sevres porcelain lidded urns with heavy gilding, $2,436; and a Baroque wooden knife carved in the form of the Biblical character Delilah from the William Hearst collection, $812. A Western Cartridge Co. Ammunition poster hit its mark at $1,102, and a Buckingham Brothers brass cigar cutter lamp earned $870. A blue glass mineral water bottle from the 19th century Tate Springs Tennessee resort effervesced at $1,102 (est. $100-$200), the same price as an East Tennessee quilt in the Great Divide/Rocky Mountain pattern. A red, white and green tulip and triangle pattern quilt, attributed to Pennsylvania, realized $928. Several lots of Tennessee-made baskets met with strong demand. The category’s top lot was a set of graduated miniature buttocks baskets attributed to Mary Prater (Cannon County, born circa 1920). Ranging in size from just 1 1/2 inches to 5 inches tall, they fetched nearly twice their estimate at $870. 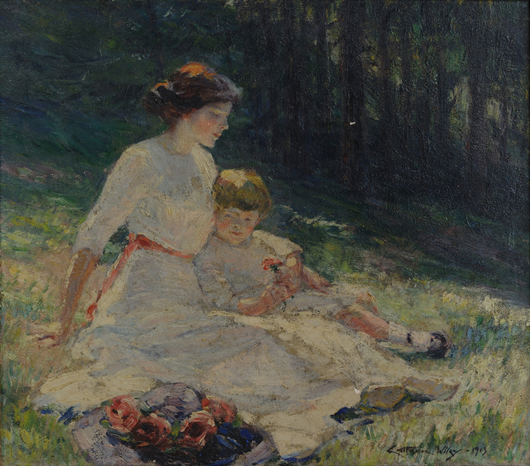 This oil on canvas of a mother and child, painted by Catherine Wiley in 1913 before her career-ending breakdown, sold to a museum for $107,880. The price was an auction record for a Tennessee female painter. Image courtesy of Case Antiques Auction. 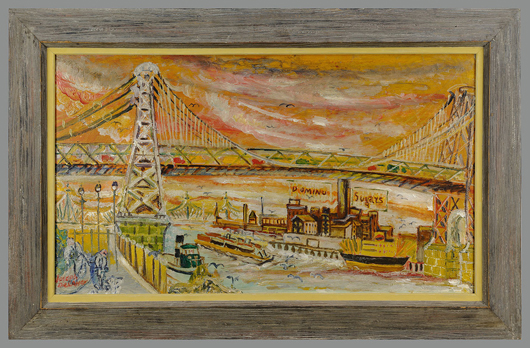 An oil on board of New York’s Williamsburg Bridge by Joseph Delaney (American, 1904-1991) crossed the block for $19,720. Image courtesy of Case Antiques Auction. 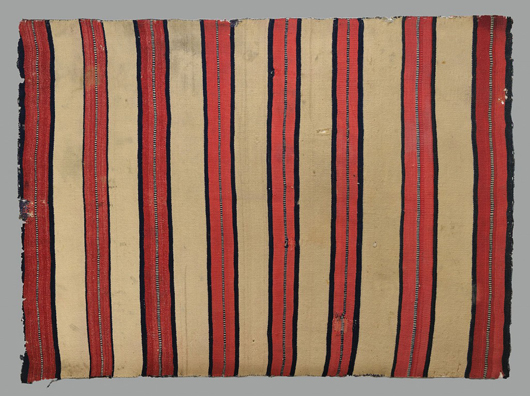 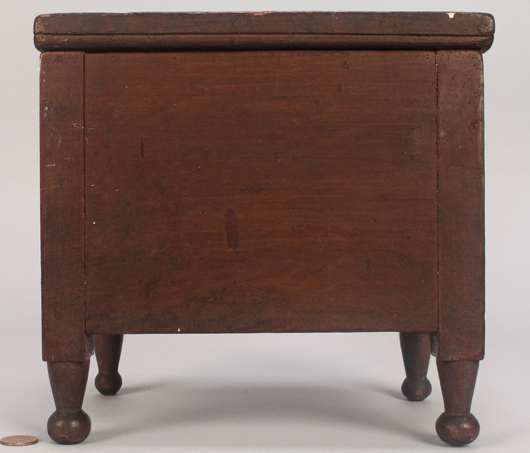 Retaining its original surface and measuring just 6-1/2 inches tall, this little box in the form of a sugar chest brought a big $2,320. Image courtesy of Case Antiques Auction. 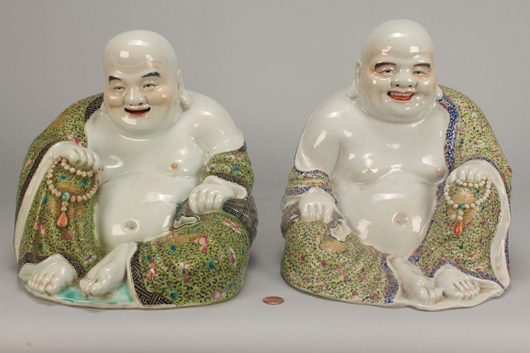 A pair of Famille Rose porcelain Buddha figures sold to an Asian buyer for $11,136. Image courtesy of Case Antiques Auction. 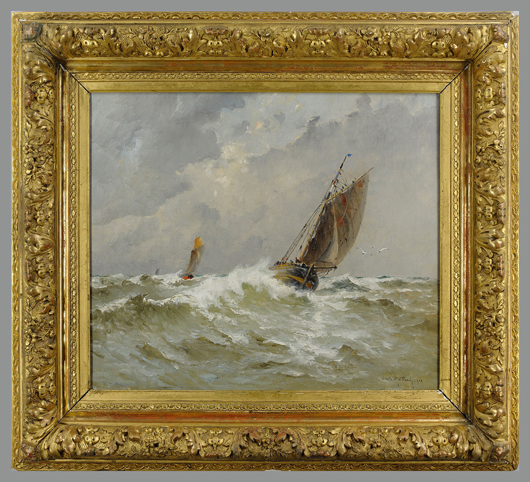