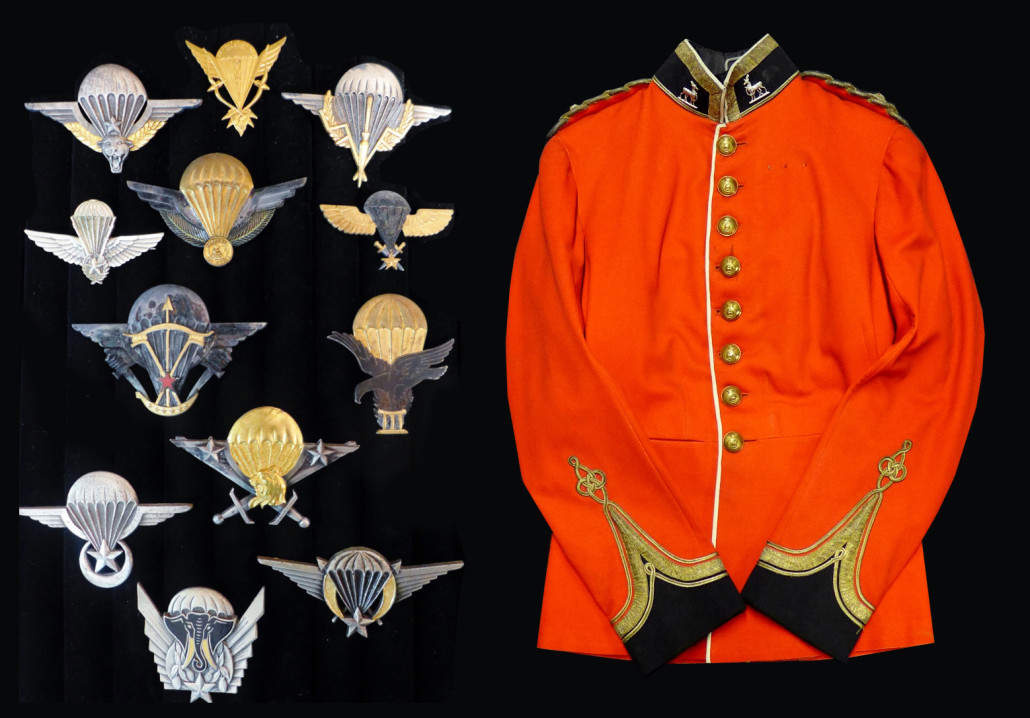 CLOSTER, N.J. – An extraordinary collection of military and historical memorabilia amassed by three generations of the same family will take the auction spotlight on November 18 in Bergen County, N.J. Sterling Associates is producing the online and absentee-bidding event that features the estate collection of Gene Christian of New York City.

The 800-lot collection of military pins, medals, flags, photos, uniforms, antique firearms and documents is anchored by a family archive that originated with Christian’s grandfather and continued with his father and later himself. All three men were members of the U.S. Army 1st Airborne Division.

“Not only did they serve in the same division over a span of possibly as long as 80 or 90 years, each of them also had an intense passion for military history,” said Stephen D’Atri, owner of Sterling Associates. “For this collection to have been passed from father to son over three generations is remarkable in itself, but for each of the three men to have served in the same division and to have had such a strong interest in the same type of material is something rarely seen. I’ve never encountered an archive like this one. It’s unique.”

An early 20th century highlight is Lot 401 (shown at top), the officer’s full dress tunic that belonged to Lt. Col. John Ford Elkington of the British Army’s Royal Warwickshire Regiment. Adorned with epaulets, rank badges and silvered collar badges, the fine, silk-lined uniform retains a Savile Row tailor’s label. A once-disgraced World War I military figure, Elkington was later fully exonerated and received not only the Medaille Militaire and Croix de Guerre avec Palme from France, but also Britain’s DSO (Distinguished Service Order), which was awarded to him by King George V. The tunic is accompanied by two books, assorted clippings and photos pertaining to Elkington’s military career and is estimated at $600-$1,000.

One of the most coveted medals in the sale is Lot 183, a very rare 1920 Russian White Guard St. George Cross of Ataman Semenov. Decorated with a twig representing the Special Manchurian Group, it comes with a letter of authenticity from its previous seller. Estimate $1,200-$2,000. 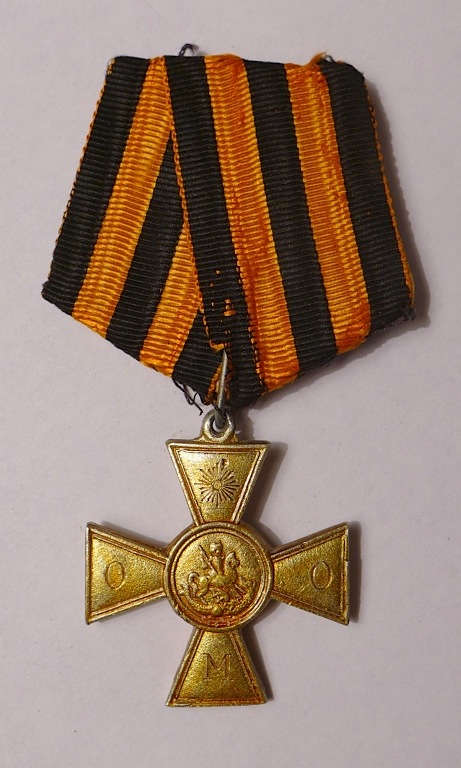 Interest is already mounting over the Chinese items in the auction, including Lot 84, an embroidered civil rank badge that would have been sewn onto the surcoat of an Imperial China official. Intricately crafted from metallic silk thread, the 13¾ by 13¼-inch badge depicts a large crane, looking fearful and running with outspread wings. “So far, this badge has generated more phone calls and enquiries than any other item in the sale,” D’Atri noted. Its pre-sale estimate is $600-$800. 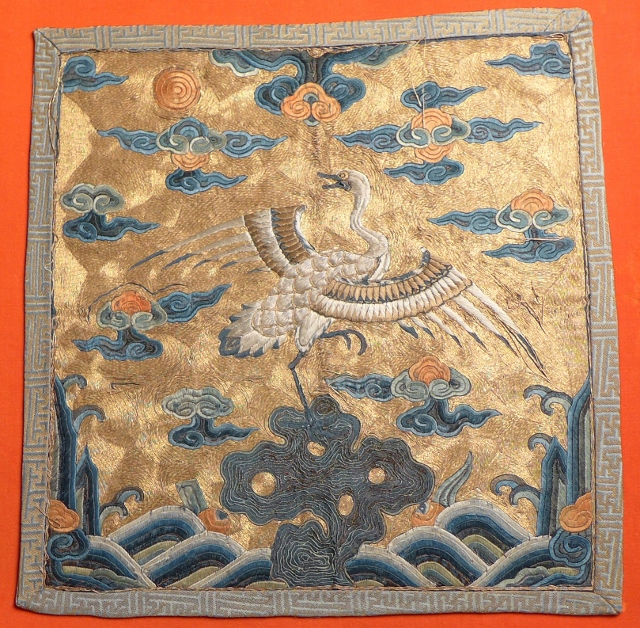 An antique Chinese military officer’s helmet (shown below) with an upright finial and brass-studded side and neck guards is entered as Lot 666 and estimated at $200-$400; while Lot 599, a rare 1870s Shanghai Mounted Rangers banner with the embroidered image of St. George slaying the dragon, is also estimated at $200-$400. 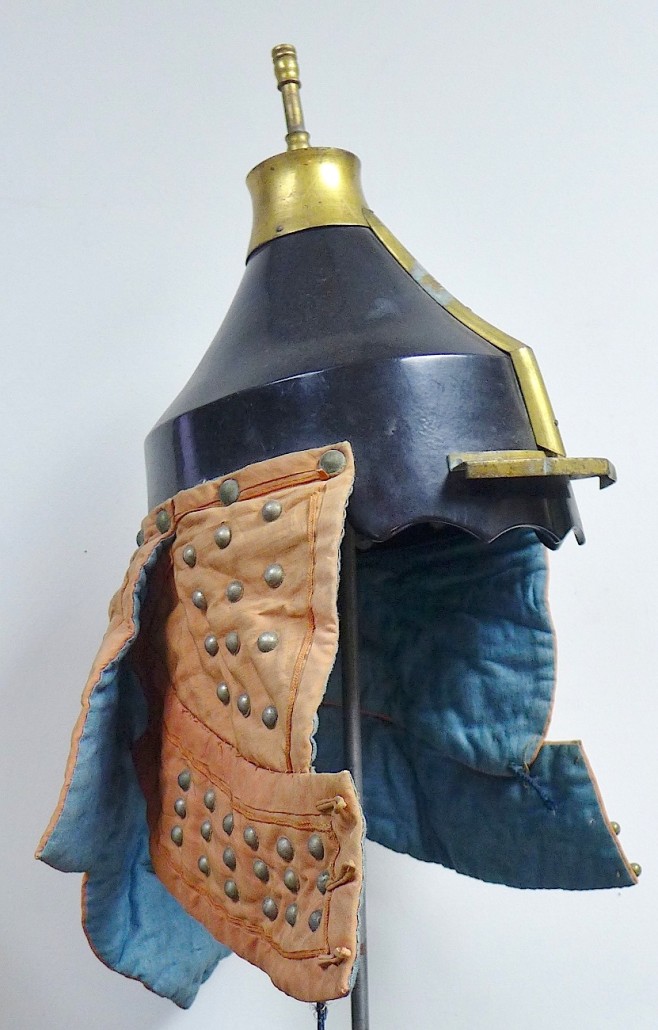 Lot 403, a rare baseball jersey from a US military officer who served in the 15th Infantry Regiment, Tientsin, China, is made of blue/gray wool with “15th INF” emblazoned on the front and the number “12” on the back. Estimate: $300-$500. 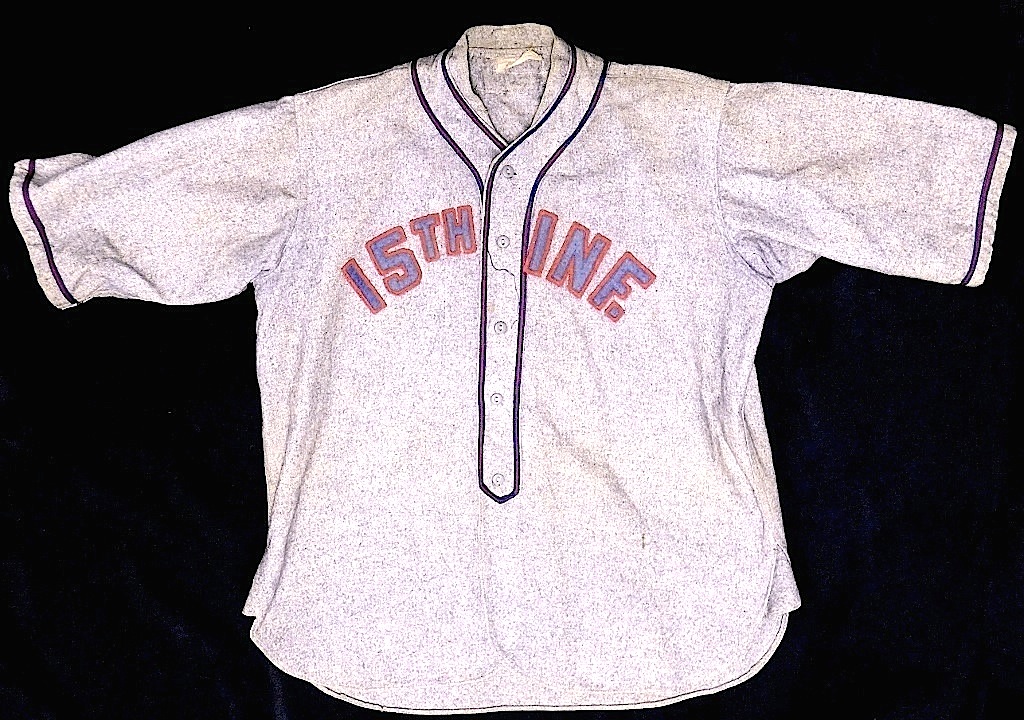 Lot 296, a nicely detailed Italian colonial medal issued to the Battalian Arabo Somalo depicts a bas-relief Italian askari wearing a fez and holding a rifle and flag. Askari were local soldiers who served in the armies of European colonial powers in Africa. The medal is estimated at $100-$300. 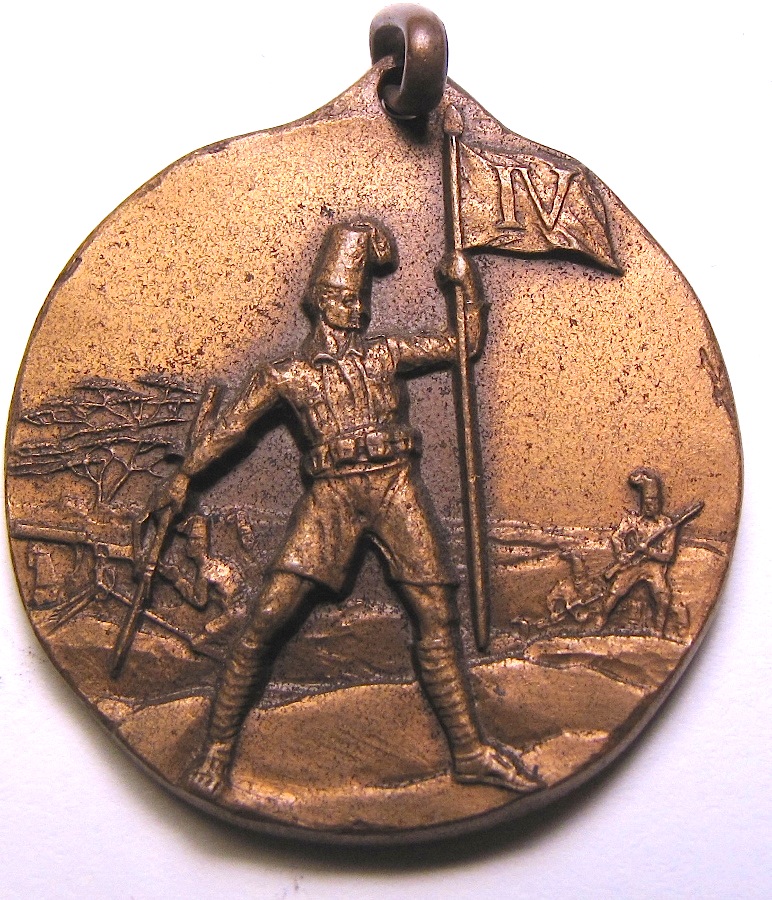 A beautiful collection of 12 French Foreign Legion African Airborne paratrooper jump wings will be offered as a single group in Lot 200. Each of the distinctive metal badges includes a parachute within its design, with additional adornments that include jungle cats, an elephant, crossed swords, an eagle, stars and other symbols. Countries represented include Mauritania, Chad, Congo, Ivory Coast, Mali, Algeria, Senegal and several others. The badges are entered with a $350-$500 estimate. 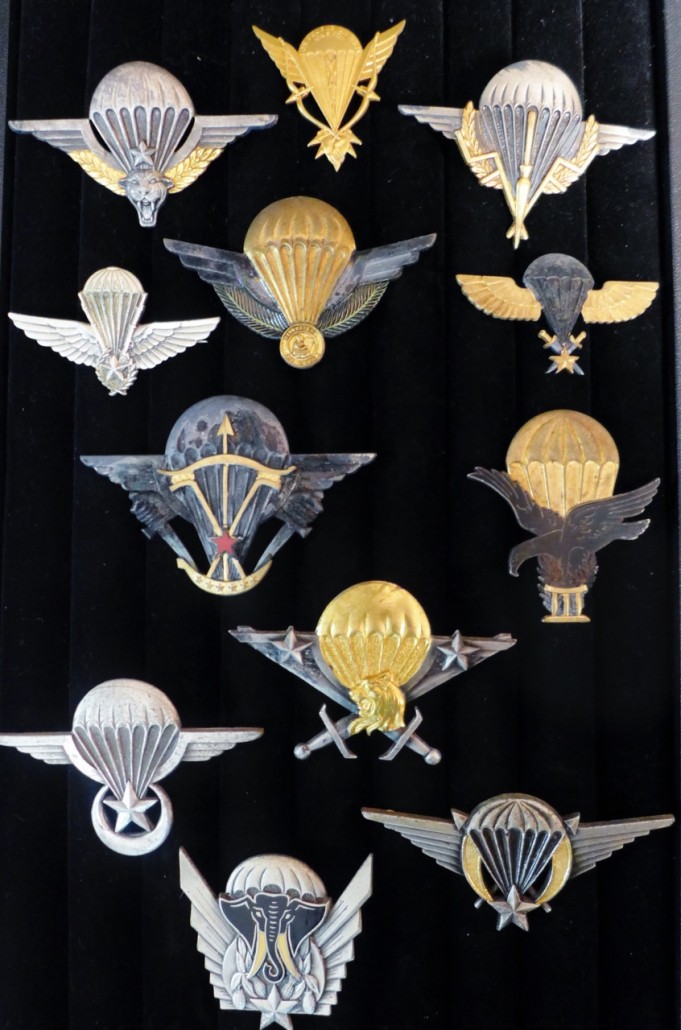 A large selection of World War II memorabilia is included in the three-generation collection. Lot 524, a German Second Model Luftwaffe dagger with the maker’s mark and hallmark for Paul Weyersberg & Co., Solingen, is accompanied by its sheath and hangers. The 16½-inch-long weapon is expected to attract a winning bid of $700-$800. 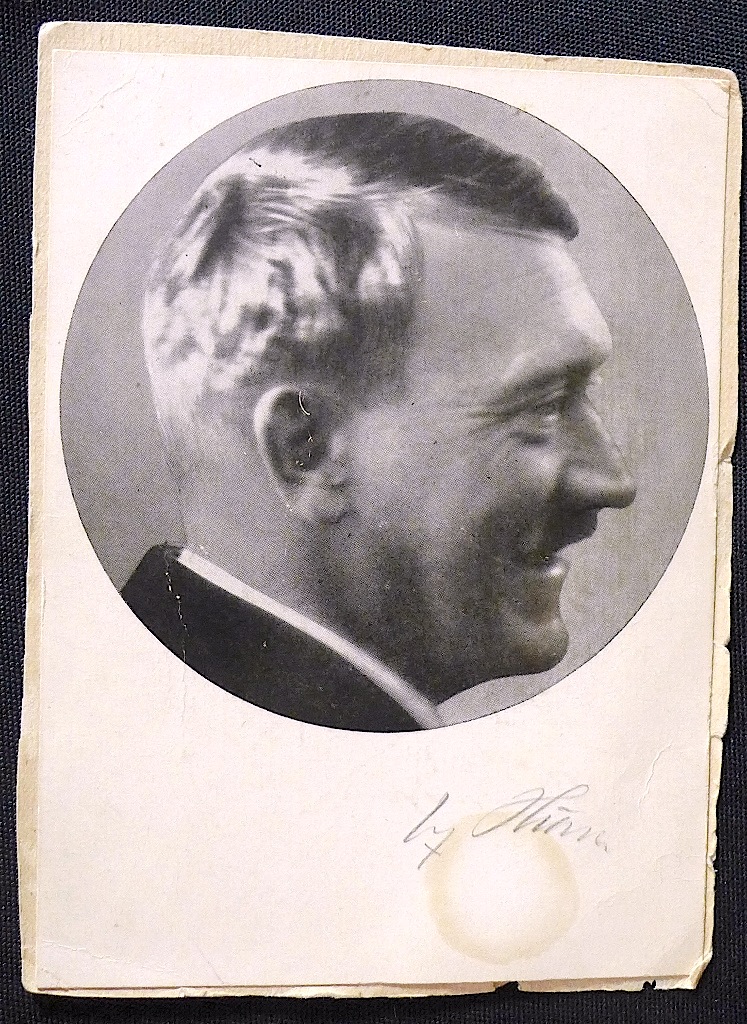 Rare and exciting to both militaria and aviation memorabilia collectors, Lot 471 is a large (5¼-inch diameter) USAAF 14th Flying Tigers leather patch. The round patch with a winged-tiger motif has retained its vivid primary colors very well and carries a pre-sale estimate of $200-$400. 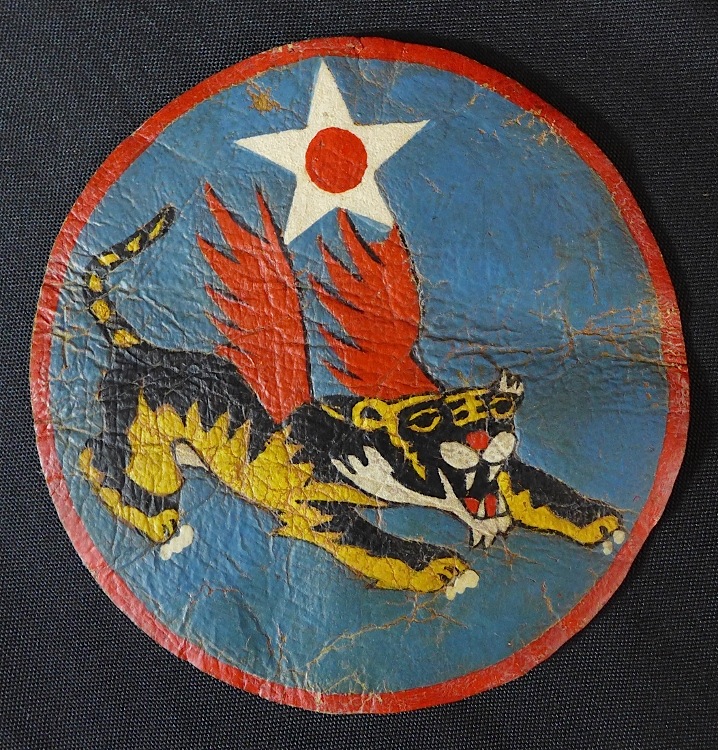 “We’re extremely honored to present this important family collection at auction,” said D’Atri. “The better part of a century of collecting is represented in it, and there are many, many rare medals and other items of great interest. We can’t recall another auction that has had this wide a scope or such a long, connected family history.”

Bidding in Sterling Associates’ online/phone/absentee auctions is conducted remotely, but all goods may be inspected ahead of time at the company’s spacious showroom. Absemtee and Internet live bidding is available through LiveAuctioneers.com.

For additional information on any item in the auction, call 201-768-1140 or e-mail sterlingauction@gmail.com.