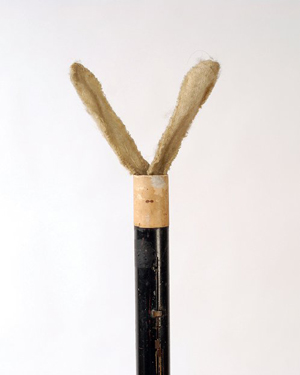 Dutch conjuror Fred Kaps, who appeared on the Ed Sullivan Show on Feb. 9, 1964, the same night as the Beatles performed, often used this walking stick to produce a live white rabbit. The 33-inch-long stick with faux ears on the top end and a spring-loaded rabbit tail at the tip has a $2,500-$3,500 estimate. Image courtesy of Potter & Potter Auctions.

Among the highlights will be apparatus of significant historic association, rare books, early posters and broadsides, and ephemera and props suitable for all levels of collectors. Twenty lots of Houdiniana will also be featured in the auction. Included are a signed Harry Houdini letter and an autographed publicity photo, each estimated at $800-$1,000.

The auction will begin at 9 a.m. Central.

Exhibition will be held during the week of May 10, with special showings arranged for attendees of the Magic Collectors’ Weekend (held in Rosemont, Ill., on the three days preceding the auction).

In several instances, magic tricks will be sold by the trunk load. Magicians who worked the chautauqua and lyceum circuits packed their acts in large trunks for transit. Passed down from famous magicians to serious collectors, these rare trunks filled with secrets of the craft carry estimates of several thousand dollars each.

Single props like Fred Kaps’ Rabbit from a Cane and a stylish Card Star made by Okito (Joe Berg) of Chicago have estimates of more than $1,000 apiece. Talk about a tough act to follow, Kaps had the distinction of following the Beatles on stage on the Ed Sullivan Show on Feb. 9, 1964.

Magician posters will include a circa 1908 three-sheet color lithograph promoting Germain the Wizard’s (Karl Germain/Charles Mattmuller) Witch’s Cauldron illusion, which has a $3,500-$4,500 estimate, and a circa 1938 three-sheet two-color lithograph for Dante (Harry August Jansen), a London magician, which is estimated at $800-$1,200. Both posters are linen backed. 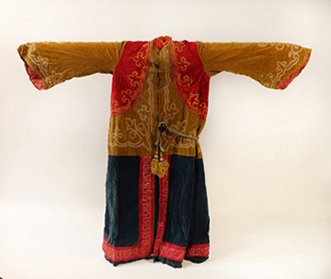 An Asian robe is one of the many props contained in this Edwin Brush/Lightner the Wizard theatrical trunk. A unique, impressive and historically significant piece of magicana from the era of chautauquas and lyceums, the trunk carries a $2,500-$3,500 estimate. Image courtesy of Potter & Potter Auctions. 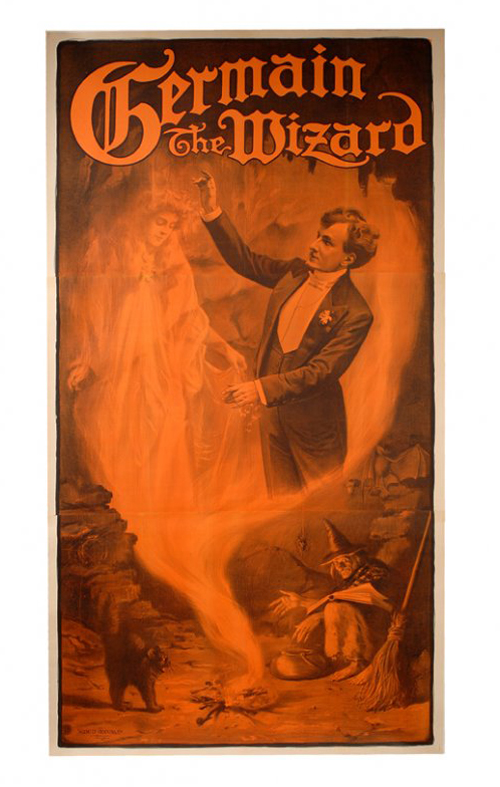 This three-sheet poster color lithograph poster in orange and black gave the public a glimpse of Germain the Wizard’s Witch’s Cauldron illusion, which materialized a female ghost from the flames of a fire. The circa 1908 poster, which is 41 inches by 76 1/2 inches, has a $3,500-$4.500 estimate. Image courtesy of Potter & Potter Auctions. 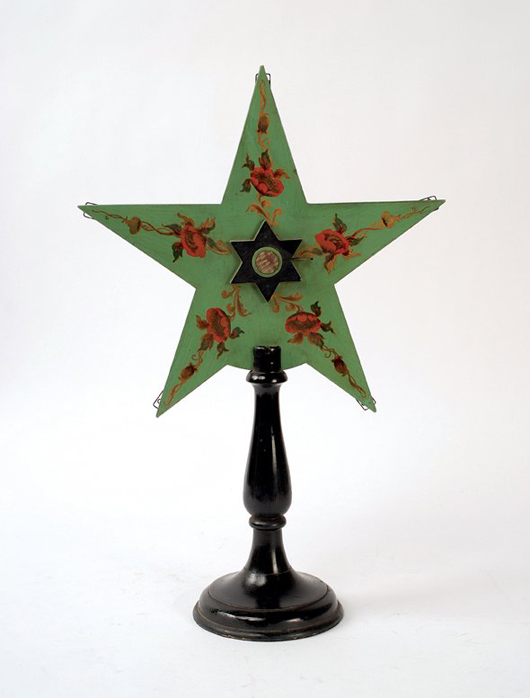 A magician in the late 1940s used this handsomely crafted card star to produce specific playing cards on command. The lacquered wooden star stands 19 3/4 inches high with a span of 12 3/4 inches. It has an $800-$1,200 estimate. Image courtesy of Potter & Potter Auctions. 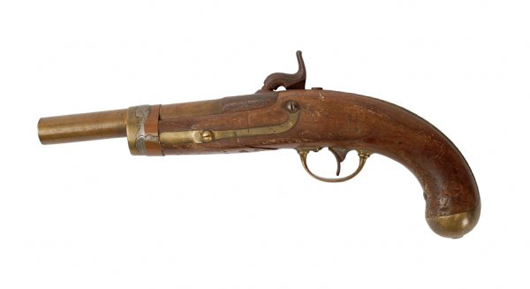 Vaudeville and chautauqua magicians Imro Fox, Frank Ducrot and Eugene Laurant used this H. Aston Model 1847 percussion pistol much like a wand. Passed down from one great magician to another, this prop is expected to bring $3,000-$4,000. Image courtesy of Pottery & Potter Auctions.