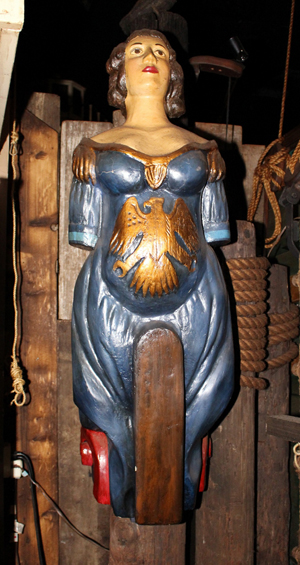 Dante’s had a decidedly nautical look and feel. Items such as this authentic ship’s maiden will be part of the auction. Ahlers & Ogletree Inc. image.

ATLANTA – Items and equipment from Dante’s Down the Hatch, the the iconic Atlanta restaurant and nightclub that stood for more than 30 years in the fashionable Buckhead section of town, will be sold on-site, at 3380 Peachtree Road, on Saturday, Sept. 21, starting at 9 a.m. Eastern. Dante’s recently closed its doors, having fought unsuccessfully to have a huge property tax bill lowered.

The auction, which will feature a wide range of antiques, props, architectural items, vintage cars and restaurant equipment, will be conducted by Ahlers & Ogletree Inc., the Atlanta-based auction firm. For those unable to attend the sale in person, online bidding will be available via LiveAuctioneers.com.

For a cost of $95, people can register to bid on the premises and be a part of Dante’s closing events. The price includes registration, a catalog of auction items, food and drink for the entire weekend and great music by Dante’s longtime in-house jazz band, the John Robertson Trio.

Dante’s Down the Hatch was as colorful and eclectic an establishment as its octogenarian owner, Dante Stephensen, a former Navy SEAL who opened the original Dante’s restaurant in Underground Atlanta in 1970. When business declined in 1981, he moved the operation uptown, to Buckhead. It was an instant success, with its fondue menu, nightly jazz, turtles and crocodiles.

Turtles and crocodiles? Yes, Stephensen envisioned Dante’s as much a tribute to his worldwide travels as a place to wine and dine. The place featured a replica of a 19th century ship as a centerpiece, one that included a “moat” filled with turtles and crocodiles. The ship was a replica of the 18th century vessel the Bounty, as featured in the movie Mutiny on the Bounty. The mast and sails were authentic, the mast a massive barkantine piece off the Georgian ship the Barba Negra. Other touches included a genuine ship’s telegraph and a ship’s binnacle.

Nearly everything will come up for bid, to include striking architectural elements such as Baptist pews, a Spanish Catholic confessional and an 18th century Orthodox Presbyterian hand-carved pulpit, all brought over from churches in Europe; a pair of 11-foot-tall exterior doors from the Land Bank in London; fabulous stained glass pieces, including windows from England that tell the story of the Industrial Revolution; and hand-crafted beveled glass windows framed in nickel.

Dante’s Down the Hatch was a huge success story in an industry where more than 30 percent of restaurants fail within their first year. That success can be attributed in large measure to Dante himself, who was part restaurateur, part raconteur and completely hands-on when it came to his clientele and staff, nearly all of whom returned to work for him after a fire in 2001.

Stephensen is still as charismatic and energetic as ever, but it was the tax man who eventually became his undoing. His property taxes amount to $98,000 per year, mainly because the restaurant and night club are on a choice 1.9-acre tract of property in Buckhead, across from Lenox Mall and near a score of upscale hotels and other trendy eateries. He just couldn’t pay it.

“I’m being taxed like a 40-story building,” he was quoted as saying, a rate of more than $74 per square foot. When Atlantic Realty Partners came along with a bid to buy the land from Stephenson, to knock down Dante’s and put up a 10-story luxury apartment tower in its place, he couldn’t turn it down. But he hasn’t ruled out reopening Dante’s somewhere else in Atlanta.

Ahlers & Ogletree Inc. is a multifaceted, family-owned business that spans the antiques, estate sale, wholesale, liquidation, auction and related industries. The firm is always accepting quality consignments for future auctions. To consign an item, an estate or a collection, call them at 404-869-2478 or send them an e-mail at info@aandoauctions.com. 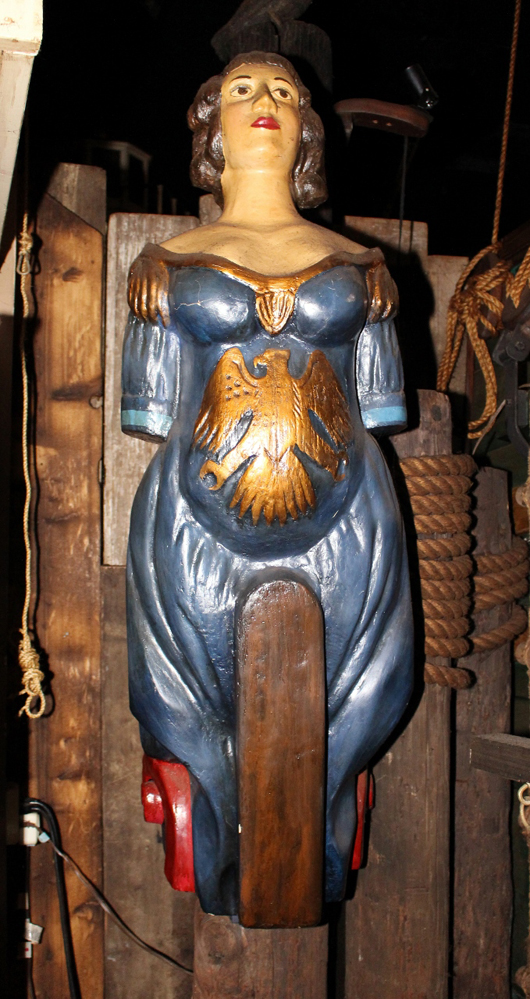 Dante’s had a decidedly nautical look and feel. Items such as this authentic ship’s maiden will be part of the auction. Ahlers & Ogletree Inc. image.

Entrance sign to Dante’s Down the Hatch, an Atlanta institution for more than 40 years, 32 of them in Buckhead. Ahlers & Ogletree Inc. image. 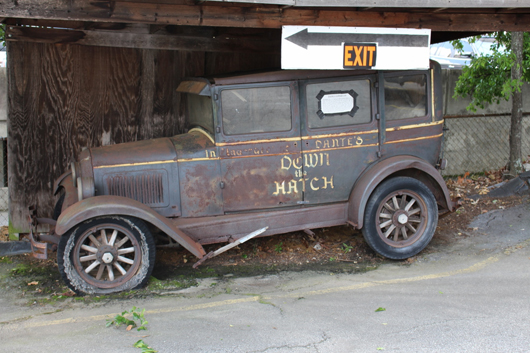 An exit sign directs diners past an old car. About a half-dozen classic restored cars (not including this one) will be part of the sale. Ahlers & Ogletree Inc. image. 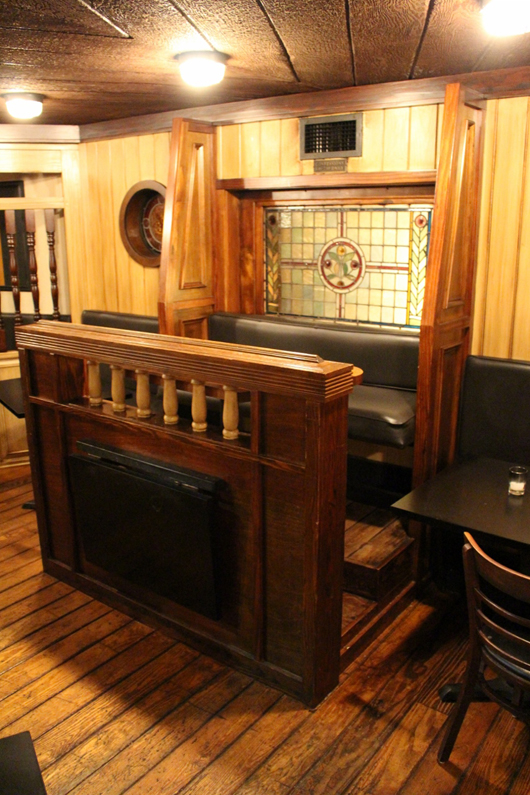 Marvelous architectural elements – including the plank flooring shown here – will be sold at the Sept. 21 auction. Ahlers & Ogletree Inc. image. 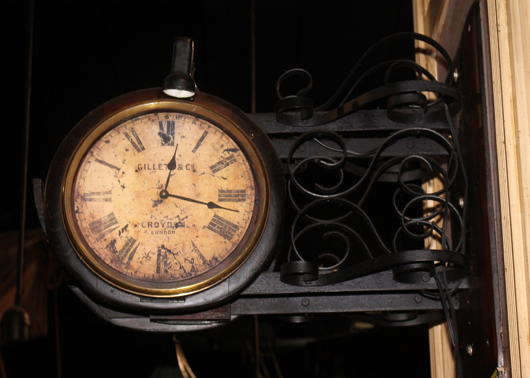 Many antique items will be sold, like this wonderful old Gillett & Co. clock, made in London. Ahlers & Ogletree Inc. image. 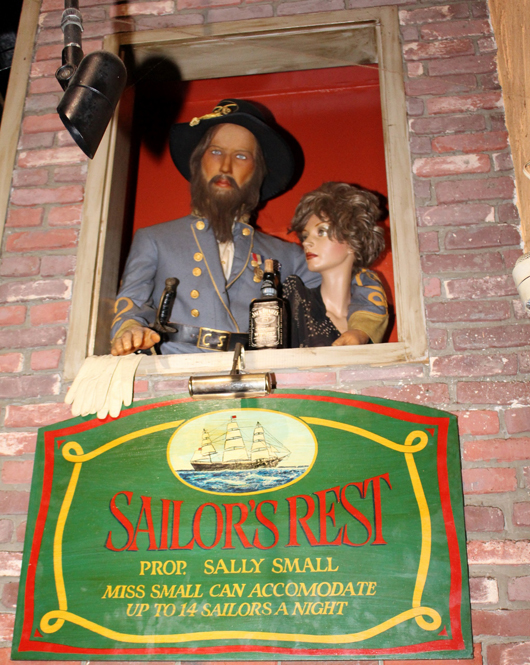 A sign for the Sailor’s Rest boasts that Proprietor Sally Small ‘can accommodate up to 14 sailors a night.’ Ahlers & Ogletree Inc. image. 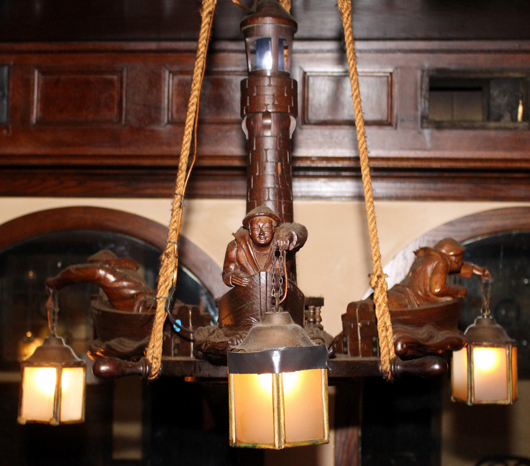 Three of Dante Stephensen’s on-premises classic cars—all to be sold—peek out beneath a sign with a slightly different last name spelling. Ahlers & Ogletree Inc. image. 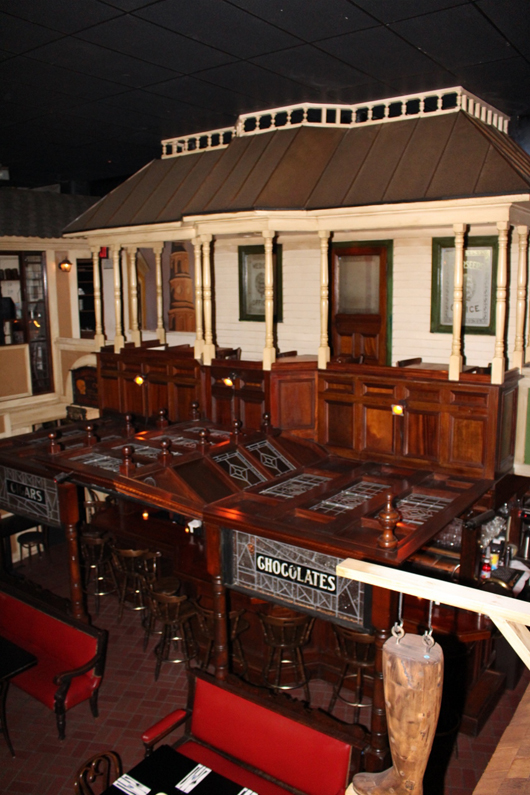