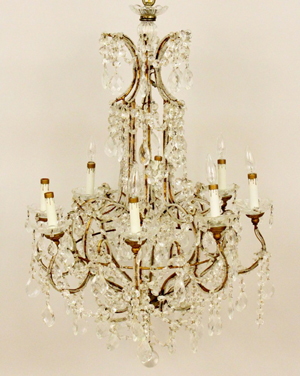 ATLANTA – About 1,200 quality lots from prominent local estates and collections will come up for bid in a two-day New Year’s Extravaganza Auction slated for the weekend of Jan. 4-5 by Ahlers & Ogletree. The event will begin 11 a.m. (EST) both days of the sale. LiveAuctioneers.com will provide Internet live bidding.

Headlining the auction will be the collection of Thomas and Marie Patton of Atlanta, who filled their three homes with carefully selected and tasteful objects.

“We’ve got a lot of high-end decorative merchandise in this auction,” said Robert Ahlers of Ahlers & Ogletree. “As a whole, the items are from expensive interiors. Collectively, they’ll make for a great sale.”

The offerings will be many and varied, to include a gorgeous eight-light crystal chandelier, a dazzling 5 1/2-carat diamond ring, a 1921 Steinway grand piano beautifully restored, a handsome apothecary cabinet with a clock at the top, a neoclassical hand-painted four-panel folding screen, a Continental Grisaille figural tapestry panel and a Chinese porcelain seated Guan Yin figure.

Some of the items are so visually arresting they’re certain to spark interest. Two examples are an 18th century clockworks converted table, constructed from hand blacksmithing, likely taken from an Italian church and later converted into the base for a rectangular glass-top table; and a late 19th or early 20th century Southern French shoemaker advertisement, hand-painted on canvas, depicting a boy carrying an oversize shoe, monumental at over 12 feet tall.

Fine art will be served up in abundance. Works by French painters will include a 19th century oil on tin by Charles Durand (1837-1917), titled Homme en Armure (Man in Armor), depicting a man in a suit of armor in an outdoor setting; and an oil on canvas by Alfred de Dreux (1810-1860), titled Kissing Couple on Horseback, depicting a romantic kiss between an elegant beauty and a gentleman with a mustache and cap, both on galloping horses.

Other French works will feature a monumental oil on canvas by Jules Victor Verdier (1861-1926), titled Nymphs, depicting three nude female beauties in the form of mythological nymphs emerging out of shallow water on a rocky waterline; and an oil on canvas still life attributed to Jean-Baptiste Monnoyer the Elder (1636-1699), showing a large urn with a snake at the left, slithering down a cascading garland of various fruit, to include apples, grapes and plums.

Italian renderings will include an exceptional 19th century oil on canvas from an Italian School painter in the manner of Tiepolo, depicting an active Venetian festival street scene, to include numerous figures celebrating in masquerade masks in an outdoor courtyard; and an oil on canvas attributed to Bartolomeo Manfredi (1580-1622), titled Boy Playing Mandolin and showing a bust of a boy musician wearing a red scarf and shirt and playing a stringed mandolin.

British painters will be represented by Gerald Cooper (1899-1974), whose Still Life With Pears, Apples and Sunflower is an oil on canvas depiction of a table covered with a white tablecloth and a large spread of fruit. Also, an oil on canvas rendering of Female Nude With Three Attendants, attributed to William Etty (British, 1787-1849), shows a young nude female beauty standing with her back to the viewer, admiring herself in a mirror held by an attendant.

Bronzes will also be sold, including a 19th century patinated figural sculpture of the 17th century Dutch painter Rembrandt van Rijn, by Louis Royer (Netherlands, 1793-1868). The work shows Rembrandt standing at full length, in typical dress and holding an artist’s tool in one hand. Also offered will be a finely rendered Orientalist themed patinated bronze figure of a large camel carrying roped baskets and being tended to by a semi-nude blackamoor, by an unknown artist.

From camels it’s a short leap to tigers and dogs, first with a large pair of papier-mâché and polychromed striped orange tigers in an elongated crouch, rendered in the early 20th century for Learbury Clothiers of Syracuse, N.Y., and with “Learbury Tiger” in all capitals at the bottom of the display platform; and then with a pair of large 18th century antique stone dogs, 38 inches in height, showing two dogs seated on their hind legs, with pleasant expressions and mouths open.

Returning to fine art, works by American painters will feature an oil, acrylic and lacquer on Kashmir gold granite by Gary Kaelon (1944-2002), titled Marsh Lions, large at 67 1/2 inches by 82 inches and showing a lion and lioness by the water’s edge (she in an alert crouch); and an oil on canvas still life by the American-Canadian artist Hal Morrison (1848-1927), depicting a footed glass bowl with a large stack of fresh peaches at the center, probably painted in Georgia.

Other noteworthy artworks will include an oval oil on canvas titled Allegorical Painting, attributed to the Portuguese painter Jose Malhoa (1853-1933), apparently unsigned and said to have originally hung on the ceiling of a parlor room in a private castle in Lisbon; and an oil on wood panel by Toon Kelder (Dutch, 1894-1973), titled Musicians and Figures in Landscape, with figures to include female nudes, a seated dog, a minstrel musician and a rider on horseback.

Also to be sold will be a Watson Brothers 12-gauge double-barrel shotgun (English, circa early 20th century, with the marking “Made of Sir Joseph Whitworth 3”) with a walnut stock, detailed metal engraving with scrolled foliate decoration, cleaning rod and accessories and with the original brown leather rectangular fitted case bearing a paper label in the interior reading, “By appointment to him the Sultan of Turkey, Watson Bros.”; a Chinese carved ivory puzzle ball on a stand; and a gorgeous 19th century hand-painted dresser.

For details call Ahlers & Ogletree at 404-869-247 or email them at info@aandoauctions.com. 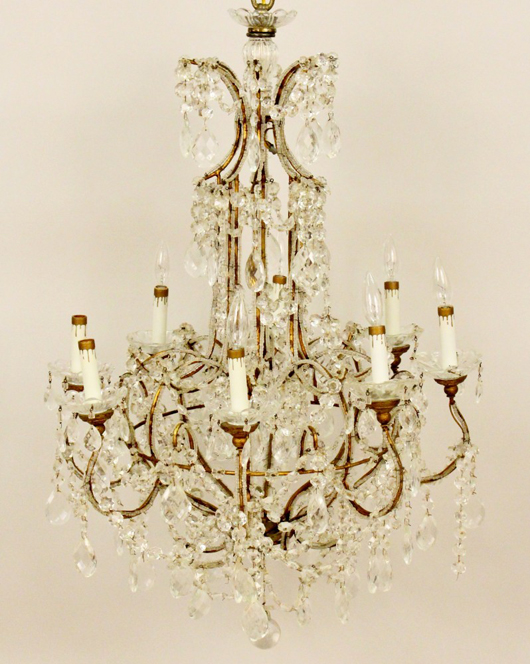 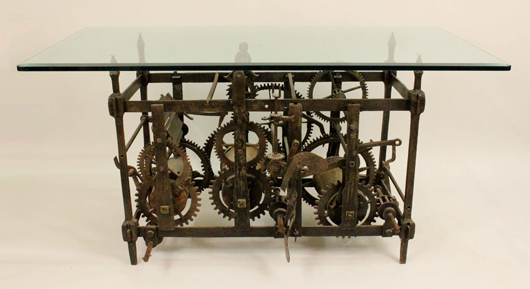 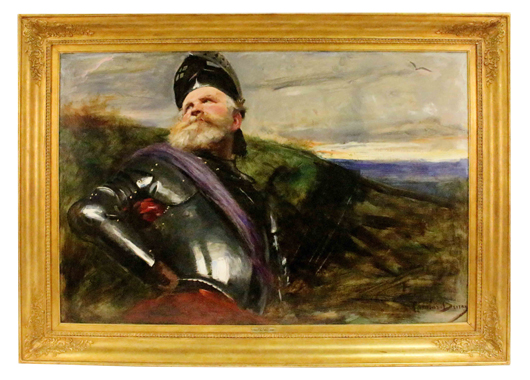 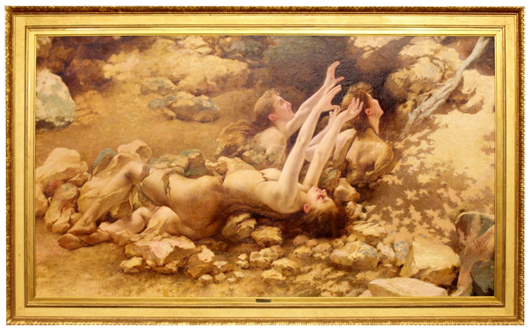 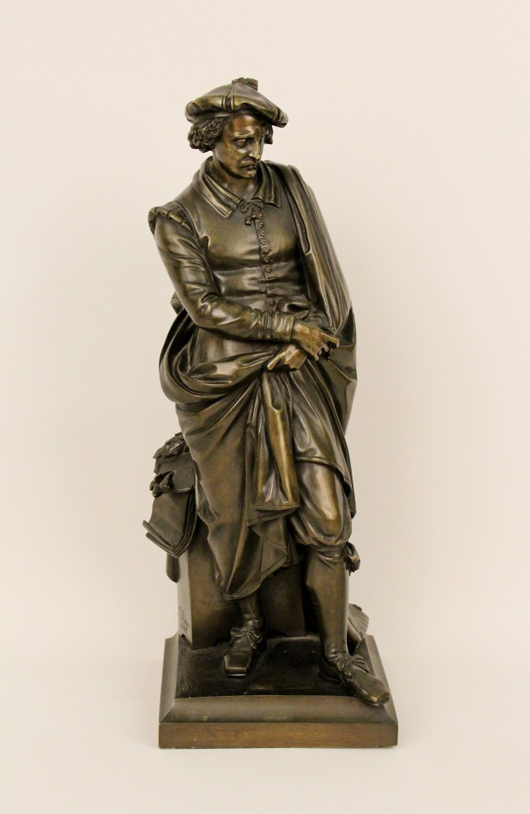 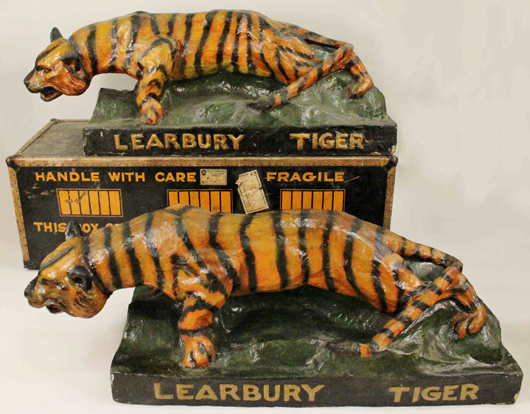 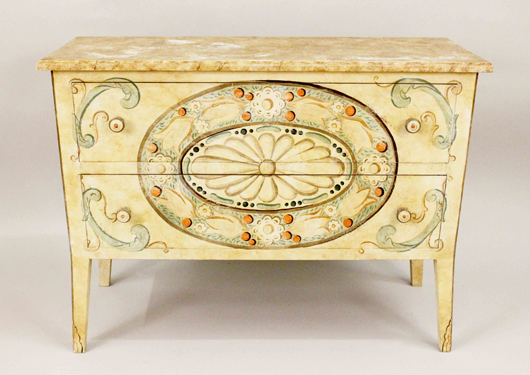 This gorgeous 19th century hand-painted dresser is just one of many period furniture pieces in the auction. Ahlers & Ogletree image. 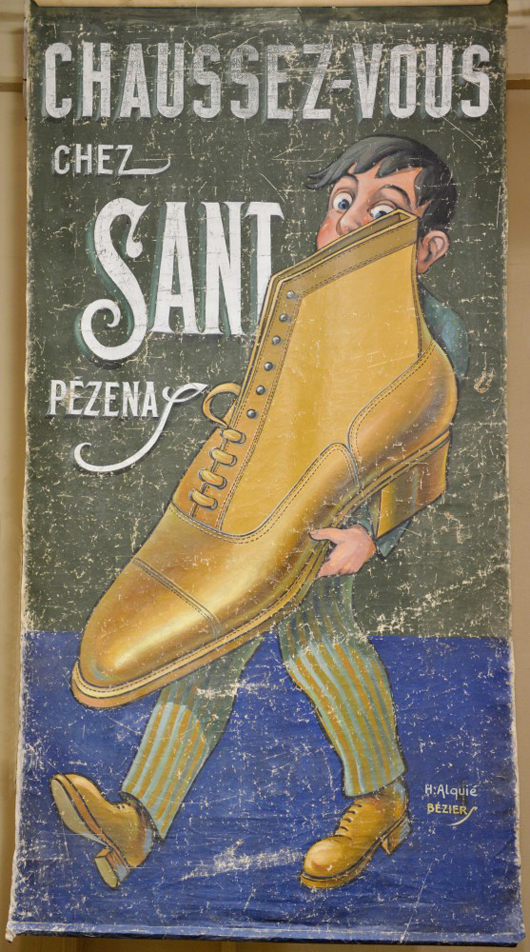