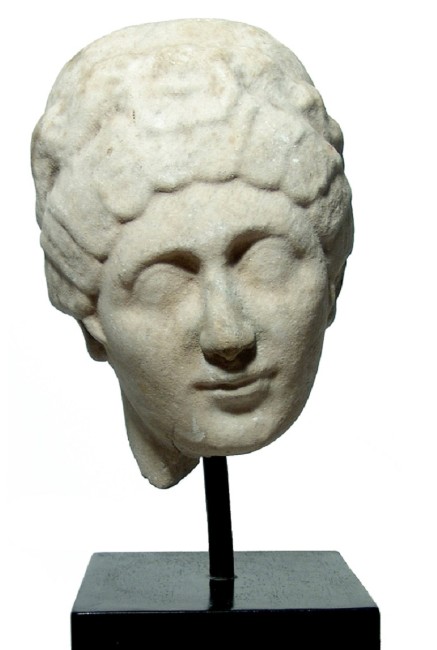 “It’s Auction 86 and we’re featuring an incredible assortment of antiquities from a wide variety of cultures,” said Gabriel Vandervort of Ancient Resource Auctions. He added, “Buyers are bound to get some really wonderful pieces at great prices.”

The auction will go live on Aug. 1 at 9 a.m. Pacific time and will continue throughout the day. Up for bid are over 375 lots of authentic Egyptian, Greek, Roman, Near Eastern, Holy Land, Byzantine, Asian and Pre-Columbian antiquities, plus scarce examples of ethnographic art – something for every level of collector.

The fantastic ancient Graeco-Roman mummified cat (est. $9,000-$12,000) consists of the body (still wrapped) and a modeled separate cartonnage head containing the skull of a small cat. The lot is accompanied by an x-ray taken in the early 1980s and is referenced in Hamilton Price’s 1897 collection catalog. It was later auctioned by Sotheby’s in 1911.

The lovely Roman marble head of a woman (above) with large eyes and attractive features also has an estimate of $9,000-$12,000. The subject is wearing a diadem with central adornment, her hair stylized in stiff curls that frame her face with elaborate coif at back. Her features retain nice detail and show a gentle expression. The head is 10 inches tall.

The Hellenistic bronze trident, 48½ inches by 12½ inches, is of heavy construction with three long tines, each with rectangular profile and rounded tips. It’s a fantastic piece that is too heavy for any type of utilitarian use and was likely mounted on a long shaft and in the hands of a sculpture of the god Poseidon or other deity. It should hit $4,500-$6,000. 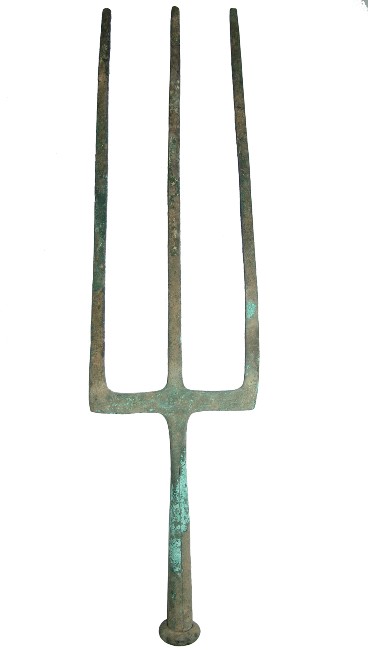 A set of four large Egyptian alabaster canopic jars (Late Period, circa 664-332 B.C.), each carved from a creamy stone with horizontal veins, is estimated to reach $9,000-$15,000. Each jar is well-hollowed with a low ledge around the rim to fit the lids (now lost). The largest jar is 8 inches tall. Canopic jars were part of Egyptian funerary equipment, used to store the viscera of the deceased, with each jar holding a specific organ or part.

A gorgeous deep blue glazed ushabti (an Egyptian funerary figure meant to carry out heavy manual tasks on behalf of a person in the afterlife), Third Intermediate Period, circa 1075-945 B.C., should bring $6,000-$8,000. The 5¾-inch mummiform ushabti, wearing a striated wig, has arms folded at the chest, holding hoes, a bag suspended at the center of the back.

A handsome Etruscan bronze figure of a nude male youth from the third or second century B.C. has an estimate of $4,000-$5,500. He’s wearing a diadem, his left hand clutching perhaps what was a scepter and his right hand extended. His facial features are quite striking, with rows of curls framing his face and his musculature well-defined. The figure is very well-preserved, with a deep olive-green patina. It’s nicely mounted on an antique stone base.

A Roman glass cosmetic vessel from the fifth century, light blue-green in color and 7¼ inches tall, should fetch $3,000-$4,000. The central compartment is wound with horizontal bands of threading and it has a rounded rim and wide base. It’s a fine example of the vessels popular in the late Roman empire, well-preserved, with mineral deposits.

A gorgeous antique gold bracelet with seven Egyptian scarabs (six are ancient Egyptian scarabs, one is modern) is expected to go for $2,500-$4,000. All the scarabs are nicely set in a custom gold bracelet (unmarked, but likely 10K). The links are adorned with rosettes and a floral element is atop the clasp. It is 7 inches long, not including the safety chain. 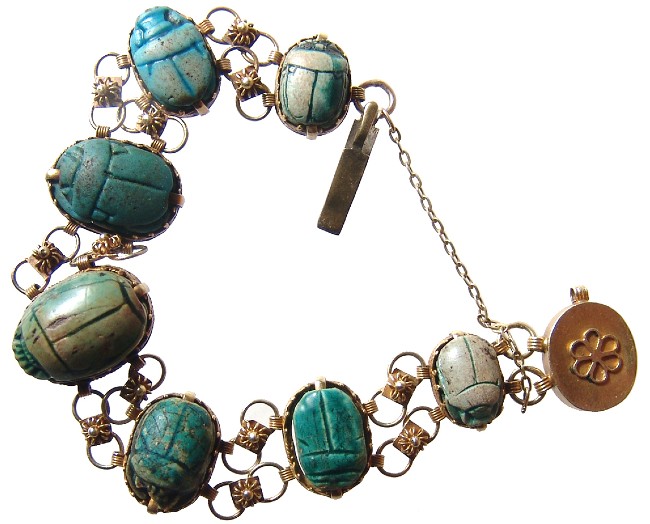 Because of social distancing restrictions in Los Angeles and the COVID-19 health crisis, in-person meetings to preview items are difficult. However, Ancient Resource Auctions is happy to send additional photos and conduct detailed condition reports for interested bidders, as well as answer any and all questions. Call 818-425-9633 or email ancientresourceauctions@yahoo.com. 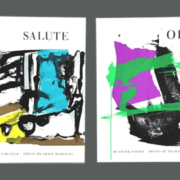 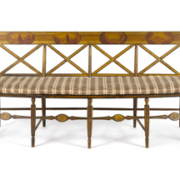 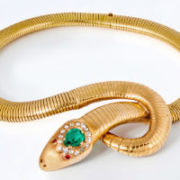 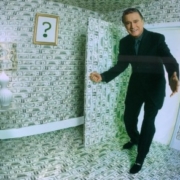 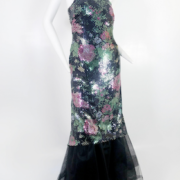 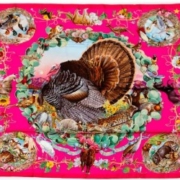 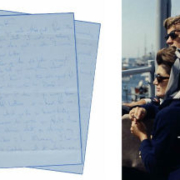