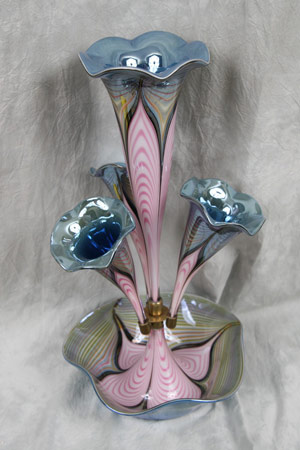 One of two made, an 18½-inch-tall artist’s proof of a pulled-feather luster epergne hand blown by master glass artist Richard Golding of Okra Studios, Stourbridge, England.

CHARLESTON, S.C. – One of the world’s great private collections of antique and studio glass – the Andy and Rob Collection – will be auctioned in its entirety on Oct. 5 in Charleston. Estate Road Show Auctioneers will produce the sale of more than 275 pieces of superior glass designs.

Andy Stone and Rob Brunton built their collection over a 10-year period, traveling extensively to obtain the finest, most-elusive examples while also consulting with world-renowned glass authorities and conducting their own independent research. The Phoenix residents were mentored by such UK-based notables of the art-glass world as Charles Hajdamach and Raymond Slack, an acclaimed expert on pressed glass. In the United States, Andy and Rob gained invaluable insight from Steuben authority/author Tom Dimitroff , glass author/historian Jim Measell of the Fenton Art Glass Co., and Dave Peterson, author and widely respected Vaseline/uranium glass authority.

The main categories in the collection include: Vaseline/uranium, cameo, intaglio, and studio glass by artists from Victorian through contemporary times. “It’s a varied collection, and there isn’t a weak piece in the sale,” said Stone. “Over the years, Rob and I probably sold 500 pieces of glass as we upgraded.”

Stone cited condition and scarcity as the key factors behind their purchases. “A lot of times we would buy a piece of glass knowing it was special, but we would spend up to two or three years to research it and learn its history,” he said. “There’s an 18-inch Vaseline and cranberry glass candelabrum in the collection that is believed to have been made for Queen Victoria. We couldn’t identify the maker until John Scherz, an American researcher, dug into it and found compelling evidence pointing to Thomas Webb as the maker.”

Other exquisitely rare Thomas Webb pieces to be auctioned include a Victorian medallion cameo etched on Stewart cut-crystal vase, and a museum-quality bronze glass vessel that has been exhibited at both Broadfield House Glass Museum in Stourbridge, England, and the Oglebay Institute Glass Museum in Wheeling, W.Va. “Frank Fenton once borrowed this vase for three months,” said Stone. “He wanted to study it to work out how it was made, but brilliant as he was, Frank never did figure it out.”

The collection also holds what is widely regarded as the single finest example of Silveria glass in existence. Made by Stevens & Williams, it is a 1901 pinched vase made of a very rare and exotic glass developed by the famed cameo carver John Northwood II. The signed 13½-inch vase is one of six known monumental examples, only two of which are in private hands. It is valued at $40,000-$50,000.

Another outstanding entry is the circa-1895 Northwood-designed Stevens & Williams moss agate bowl. The technique that produces moss agate glass was introduced to America by Frederick Carter, who worked for Stevens & Williams, and later for Steuben. English moss agate is one of the most desirable types of Victorian glass.

Within the contemporary glass section of the Andy and Rob Collection is an exquisite pulled-feather luster epergne, one of only two made by master glass artist Richard Golding of Okra Studios in England. After they were created, both of the epergnes mysteriously disappeared and were believed lost forever. Then one day, Stone said, he and Brunton stumbled upon the epergnes in a dark corner of a Portobello Road antique shop in London. “They had gone unnoticed and unidentified in the shop for two years. We bought both of them based on their exceptional beauty, having no idea of their origin,” said Stone. “Purely by chance, glass dealer Linda Kelsey, a good friend of ours to whom we showed the pieces, immediately recognized them as the work of Richard Golding. She even drove us to his studio, where Mr. Golding confirmed they were his work – artist’s proofs, in fact – and he even signed them for us.” The example in Andy and Rob’s collection was subsequently loaned to a year-long Golding exhibition at Broadfield House.

Highly regarded by art glass aficionados in Europe and the United States, the Andy and Rob Collection will be sold in a live auction on Oct. 5, with all forms of bidding accepted, including absentee and by phone (please reserve phone line no later than Oct. 4). Real-time Internet bidding will be provided by eBay Live Auctions in association with LiveAuctioneers.com. 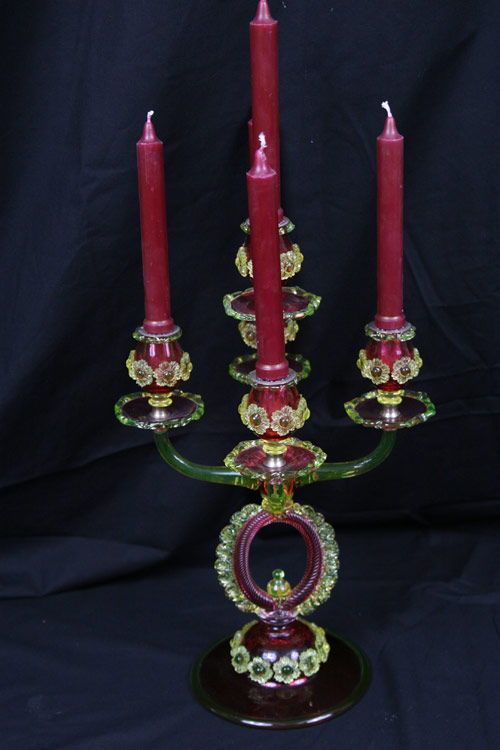 A magnificent 18-inch-tall Thomas Webb Royal Event cranberry and Vaseline candelabrum believed to have been made for Her Majesty Queen Victoria. 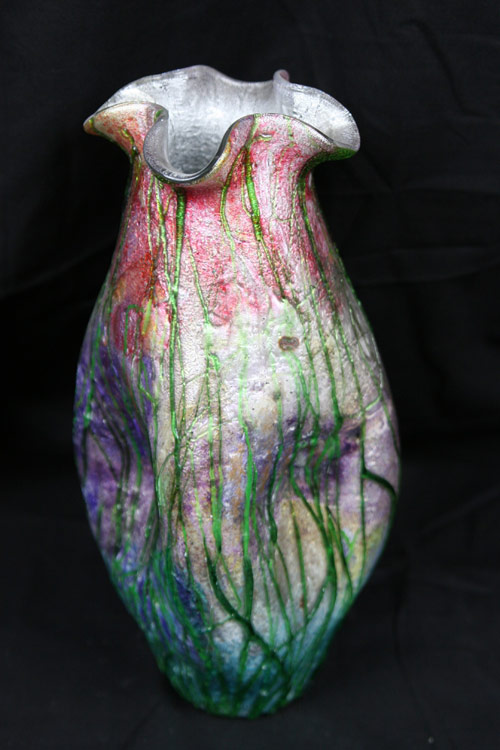 Standing 13½ inches tall, an extraordinary Stevens & Williams circa-1901 pinched vase of Silveria glass, developed by John Northwood II. One of only six known monumental examples, four of which are in museums. 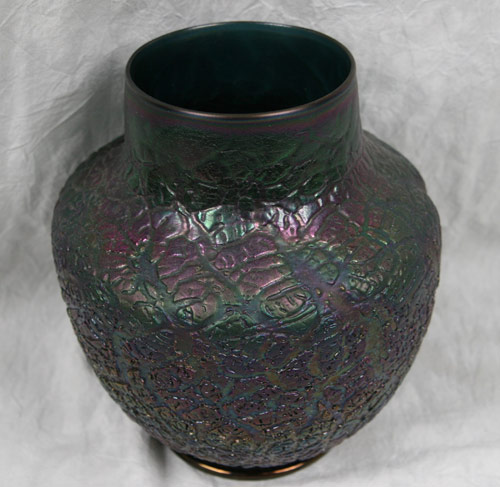 Bidders got their motors running in Morphy’s $1.7M Fall Sale