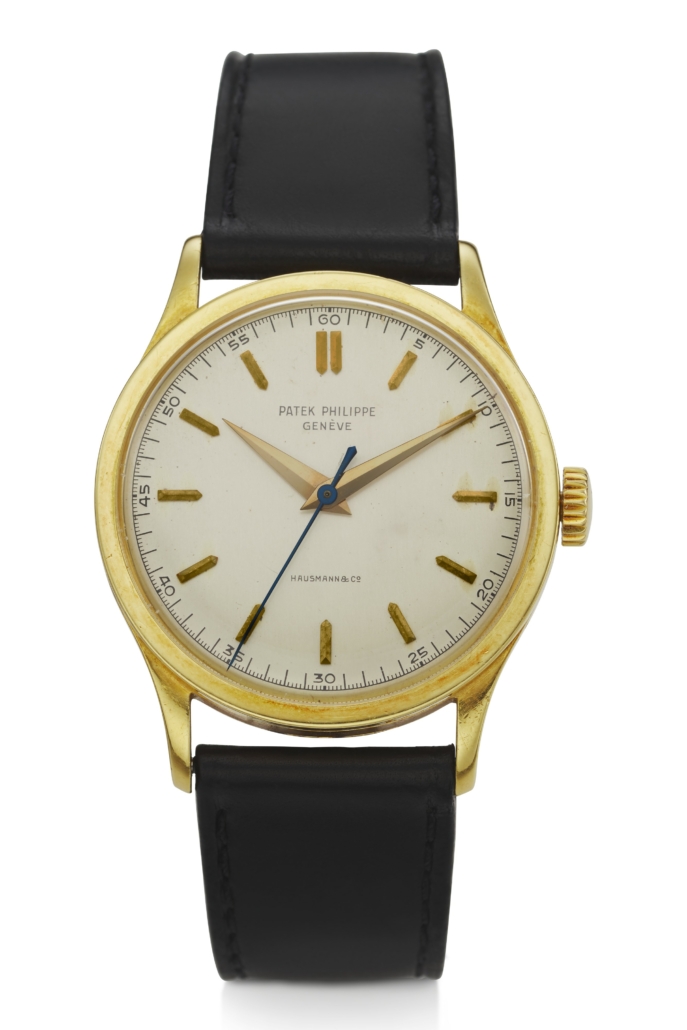 NEW YORK – From June 8-June 22, Christie’s will feature an attractive and lively offering of timepieces with unique designs, icons, and complications. The sale will feature unmissable Patek Philippe pieces, including Andy Warhol’s Calatrava. View the fully illustrated catalog on LiveAuctioneers.

The Patek Philippe Calatrava, ref 570, 18K yellow gold wristwatch, retailed by Hausmann & Co, and owned by the pop art icon and watch collector Andy Warhol is a lead lot of this online sale, alongside a highly sought-after Cartier Crash, made famous by its curved asymmetrical case; an attractive iconic Patek Philippe Nautilus, reference 3800, steel with blue dial and diamonds indexes, designed by the legendary Gerald Genta; and contemporary Patek Philippe references such as the references 5970J and 3990E, featuring the celebrated combination of perpetual calendar and chronograph complications.

Rich in quality Rolex timepieces, the auction will feature attractive Daytona chronographs as well as the Submariner or GMT-Master models, and a scarce reference 6036, steel triple calendar, oyster chronograph, anti-magnetic wristwatch, part of the celebrated Dato-Compax or Jean-Claude Killy family.

Remi Guillemin, Christie’s Watches Specialist, says, ‘We are thrilled to conclude this series of fantastic Spring 2021 auctions with New York online sale featuring pieces that perfectly match what customers expect and come to Christie’s for: rare watches that reveal a unique history and narrative. Lively pieces such as the Cartier Crash and the Patek Philippe reference 570 formerly owned by Andy Warhol will certainly excite our audience and the most demanding of collectors’.

When Andy Warhol wasn’t in his New York City studio creating pop art or directing and producing films, he was known to be a collector of many things, including fine watches. It’s believed the artist once owned in excess of 300 timepieces, some of which were rare and desirable wristwatches by Patek Philippe, and it’s been said that Warhol kept his most prized watches at the center of the canopy that hung over his bed. Included in his collection was this classic style Patek Philippe Calatrava reference 570, which exudes elegance with a timeless appeal. The classicism of Warhol’s watches definitely contrasts with his exuberant pop art, creating an interesting paradox. The present example is made even more desirable by its double-signed dial, displaying the retailer signature, Hausmann & Co., founded in Rome in 1794. The firm still resides in the same premises in Rome’s historical center, representing the world’s most prestigious watch and clock manufacturers. The Warhol Calatrava is estimated at $45,000-$95,000. 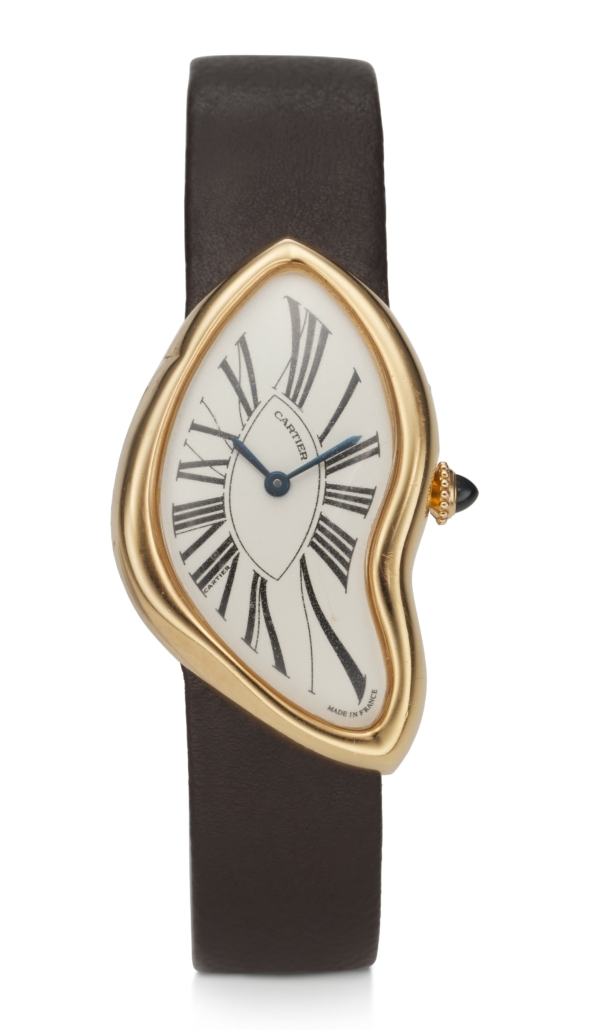 One of Cartier’s most original and creative designs is this circa 2003 Cartier Crash in 18K pink gold. Despite having a strong resemblance to the distorted watch in Salvador Dali’s The Persistence of Memory, the design of the Cartier Crash has no connection to the surreal work. The idea for the Crash came in 1967 when a client of Cartier brought the London maison his Baignoire, which had been damaged in an automobile accident. The famed jeweler repaired the watch, while Jean-Jacques Cartier was so taken with the shape of the case that he decided to reproduce it. Symbolizing non-conformist creative freedom, the Crash watch was Cartier’s way of overturning conventions and introducing a touch of humor to the elegant world of watchmaking. It became legendary, and was produced in very limited numbers, soon becoming a collector’s piece. Christie’s set the record for a Cartier Crash in yellow gold in December 2020 that sold for $225,000, more than three times its initial estimate. This example is estimated at $40,000-$60,000. 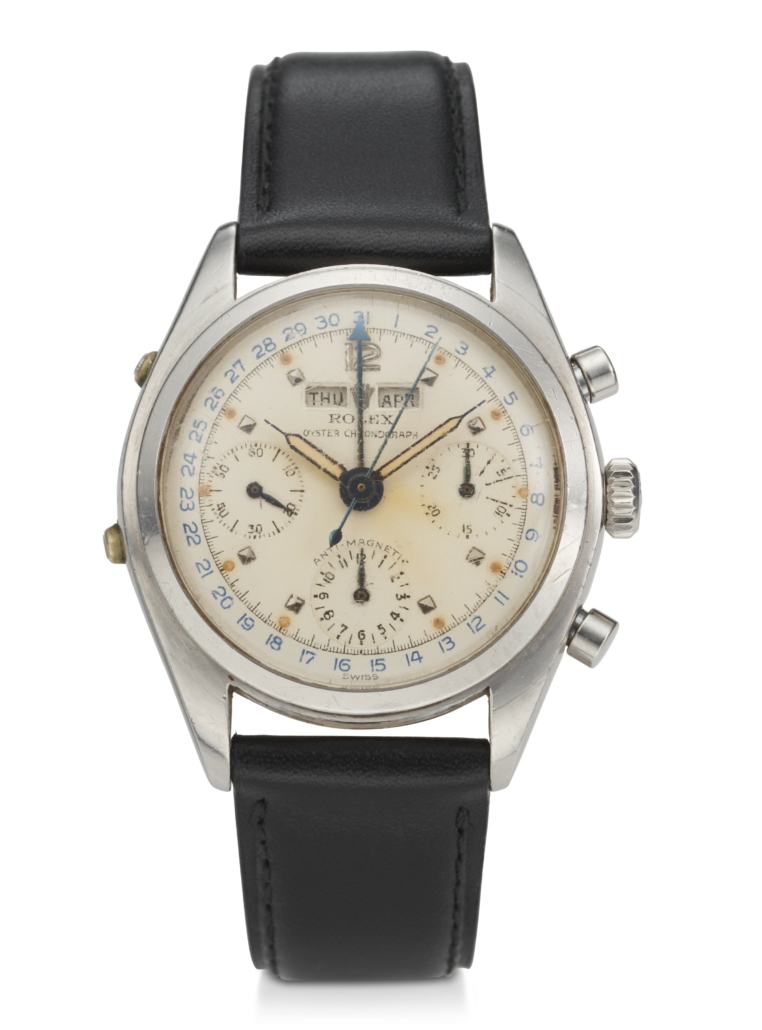 Another auction highlight is a fine and highly attractive Rolex reference 6036 stainless steel triple calendar chronograph wristwatch from 1963. Reference 6036 was the part of the celebrated Dato-Compax or Jean-Claude Killy family of complete calendar chronograph models from Rolex. It incorporates one of the most sophisticated movements ever used by the company: the Valjoux 72C. Reference 6036 carries the Oyster designation as it has a water-resistant-type screw-down case back, as opposed to the reference 4768, which has a snap-on case back. These Dato-Compax watches (references 4768, 5036, 6036, and 6236) are linked to the legendary Olympic gold medalist Jean-Claude Killy. A champion skier and man of refined taste, the name of Mr. Killy has been associated with Rolex for 40 years since he became an official Rolex Ambassador and began serving on the Rolex Board of Directors. The Rolex is estimated at $80,000-$120,000. 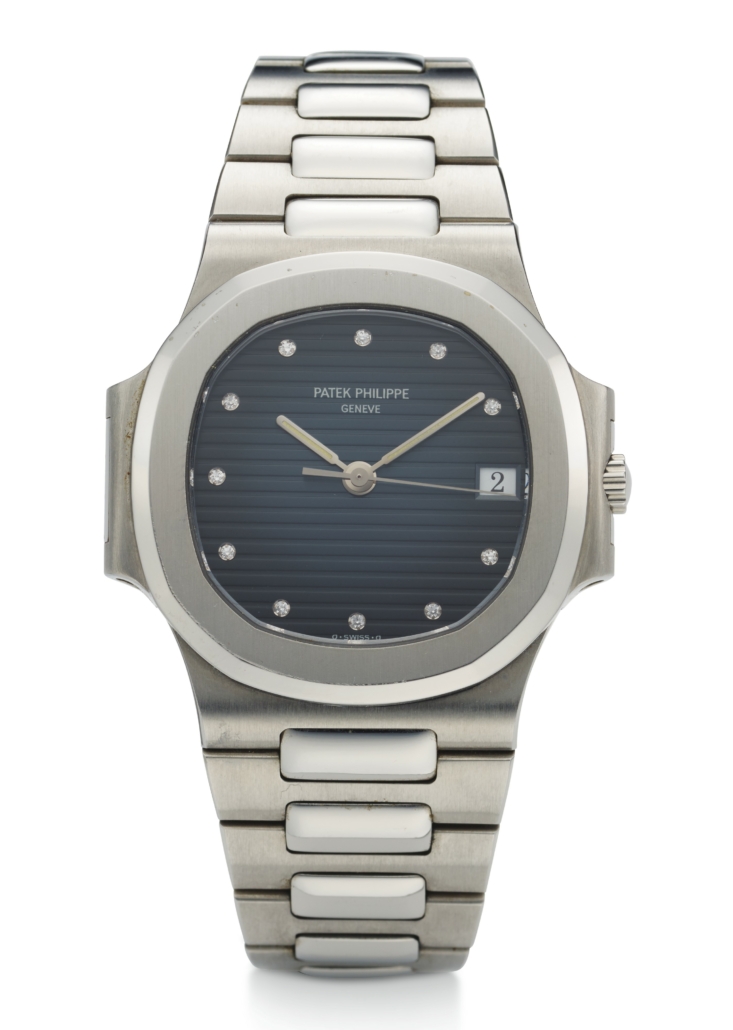 This highly attractive 3800 Patek Philippe Nautilus in steel dates to the 1990s, as indicated by its white date display. The watch comes with the original tritium dial with diamonds. This blue dial, known as the Sigma Dial, is highly sought after and can be identified by the two circles that are next to the word ‘swiss’ at six o’clock. From the early 1980s onwards, the Nautilus collection was built on three fundamental pillars: the original 3700, the mid-size 3800, and the quartz-powered 4700. The 3800 was meant to bring the Nautilus design created by Gerald Genta to a wider audience, who at the time preferred more modestly-sized pieces. The Patek Philippe Nautilus carries an estimate of $30,000-$50,000. 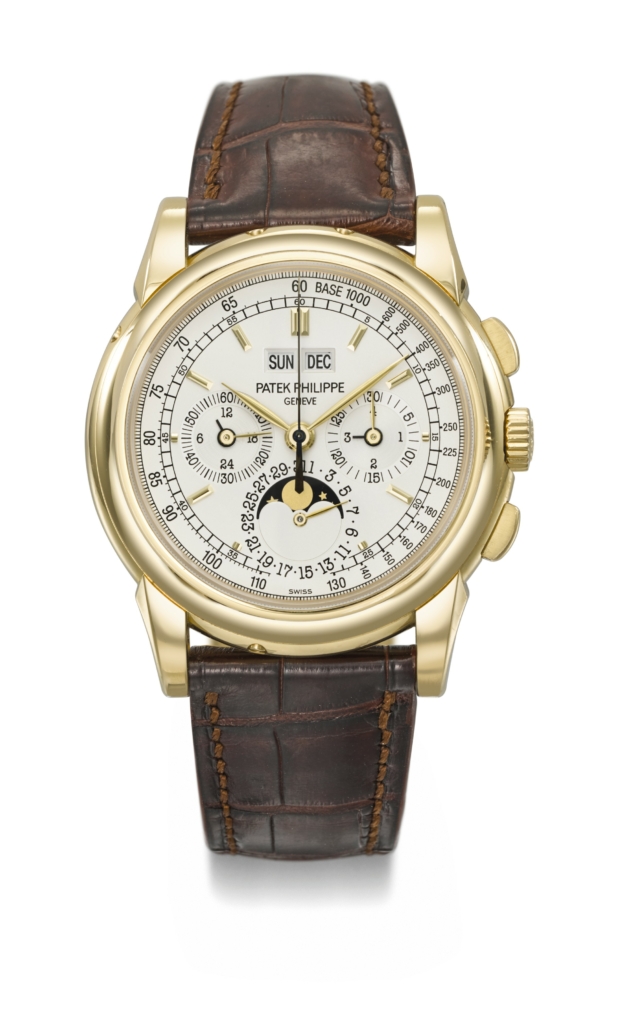 Also featured is a Patek Philippe perpetual calendar chronograph in yellow gold, double sealed. Widely acknowledged as one of Patek Philippe’s greatest watches since the venerable 2499, the reference 5970J is one of those very rare ‘perfect watches’. The elegant case size, sculpted lugs, and perfectly balanced dial that marries complexity with legibility is hard to beat. Of the four metals in which the watch was produced, the yellow gold is the scarcest, with only around 450 examples being made. Increasingly sought after by savvy collectors, this example comes with its original box, papers, an additional case back, and a setting stylus. It is estimated at $100,000-$150,000. 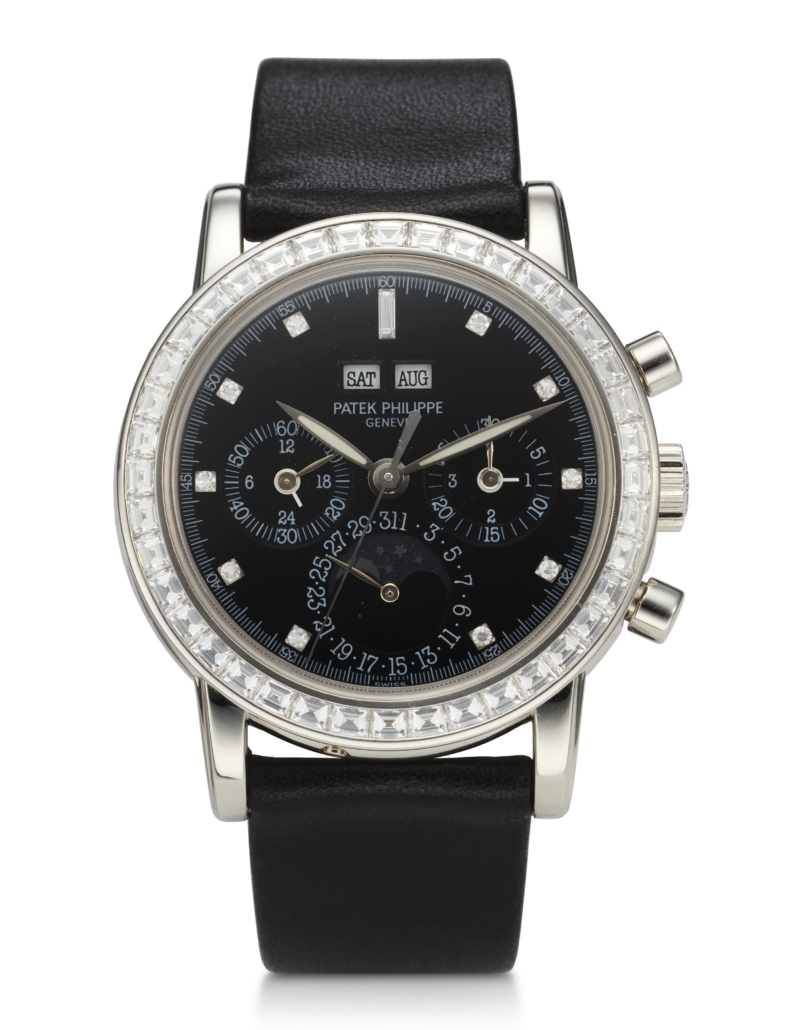 This Patek Philippe reference 3990 is an extremely rare platinum perpetual calendar chronograph wristwatch with moon phases, 24-hour, and leap year indication. In production from approximately 1995 to 2005, reference 3990 is virtually identical to the celebrated reference 3970E, with the addition of a diamond-set bezel and matching luxurious dial, and was the first perpetual calendar chronograph to feature a diamond-set bezel. Reference 3990 was cased in yellow, pink, and white gold, and more exclusively in platinum. The present example is cased in platinum and dates to circa 1994. The black dial contrasts superbly against the diamond markers and white tones of the platinum case. It is estimated at $150,000-$250,000. 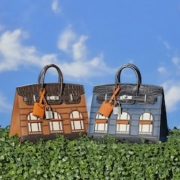