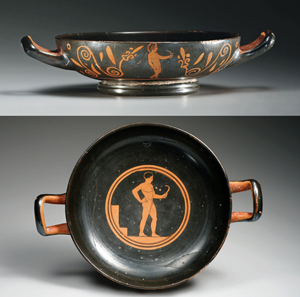 BOULDER, Colo. – Once in a great while, an auction house is blessed with an “embarrassment of riches.” That may very well describe the offerings in Artemis Gallery’s Oct. 23-24 absentee/online auction of antiquities, Pre-Columbian and tribal art, featuring the collection of career diplomat William N. Dale. Internet live bidding will be available through LiveAuctioneers.

“This is surely one of the finest selections of ancient art we’ve ever had the privilege to present at auction,” said Artemis Gallery’s executive director, Teresa Dodge. “Day one is devoted to the collection of William Norris Dale, a US diplomat who was stationed in Turkey in the early 1960s. While living there, he amassed a wonderful collection of classical, Greek, Roman and Anatolian art.”

Among the classic antiquities are superb examples from cultures far less commonly seen at auction, including four Viking objects, and pieces from the Neolithic Vinca people (Baltic), the Yourtan – an early culture from western Anatolia – and the Avar, a very early Bronze Age culture. Additionally, the selection includes objects from Ancient China, Southeast Asia and Japan.

The haunting gaze of Lot 133, a 2nd-3rd century AD Palmyran limestone portrait head of a prince, is a testament to its sculptor’s ability. With its beautifully detailed, darkly pigmented eyebrows and closely cropped beard, the subject “looks like he should be on a Hollywood set,” Dodge remarked. Estimate: $30,000-$40,000.

Lot 20, an Egyptian openwork furniture attachment, is a rare fine. Dating to the 26th dynasty (662-525 BC), the wooden ornament is carved with the image of a seated god, Toth, holding a staff with hieroglyphs. Accompanied by excellent private provenance, it is expected to reach $18,000-$22,000.

A number of great examples of Greek pottery will be offered, including Lot 62, a 430 BC red kylix with figures of athletes. Dodge described the low, footed and handled vessel used at banquets as “the classiest wine cup of the day.” It is estimated at $15,000-$20,000.

Ancient Roman glass is an area of collecting that is “still developing and has miles to go,” said Dodge. A fantastic way to get into the hobby would be Lot 110, an aubergine glass with riggery around the upper rim that has developed a bright silver iridescence. From the 1st century AD, it is estimated at $1,800-$2,500.

An important Italic marble capital that once graced the Palazzo Odescalchi in Rome and has provenance through Christie’s is entered as Lot 127. It dates to the Late Byzantine period (12th century) and is adorned with acanthus leaves and torch-shape chalices. A solid marble form standing 14 inches tall, it is accompanied by the history of its origin. Estimate: $20,000-$25,000.

Another key piece to be auctioned on day one is Lot 159A, a massive 25-inch Anatolian Troy-type amphora, circa 1500 BC, painted with red geometric patterns. “This is the type of piece that Heinrich Schliemann might have excavated while uncovering Troy,” Dodge remarked. It has a presale estimate of $10,000-$15,000.

Viking relics are led by Lot 199A, a well-preserved and “published” iron sword from the 9th-10th century. An especially fine example, it has a curved pommel, beehive end cap and is stamped with a cross. The 35-inch-long sword was found in England and has been well studied and authenticated, and has impeccable provenance. Its auction expectations are $20,000-$30,000.

Lot 204 is a very rare 3rd- to 6th-century Japanese haniwa terra-cotta figure of a dancer, which would have been used in rituals, stands 22 ¾ inches high and comes with TL test results verifying its age. A supreme example of one of the most sought-after types of haniwa clay pottery, it is estimated at $10,000-$15,000.

The Oct. 24 session contains one of the most exciting pieces ever to be handled by Artemis Gallery, said Dodge. “It’s an original Mayan limestone ball court marker – a disc carved with a scene of a seated lord in attendance. Each side would bring its own marker to a match, and rulers would bring examples like the one in our sale as a dedication offering for good luck.” The disc dates to around 550-800 AD and conveys with peerless provenance from The Denver Art Museum. The highest-estimated item in the auction, it could fetch $125,000-$175,000.

Lot 329 is a circa-300 BC standing figure from the Chupicuaro people, an early culture of Western Mexico. Standing 13 inches tall, the human effigy is brightly painted with geometric patterns on the face and body. Such figures have been known to sell in the $9,000-$12,000 range, as they are among the most desirable of all Pre-Columbian objects.

Tribal art is led by an extremely rare, mid-18th-century Coptic textile from Afghanistan. Exhibiting beautiful and ornately stitched images from the Bible, the 92 by 64-inch piece is estimated at $6,000-$9,000.

The sale is rounded out by Colima dogs of unusually fine quality, Peruvian pottery from the Moche and Inca cultures, and a great variety of gold ornaments, including nose rings, earrings and crowns.

For additional information about any item in the Oct. 23-24 auction, call Teresa Dodge at 720-502-5289 or email teresa@artemisgallery.com. 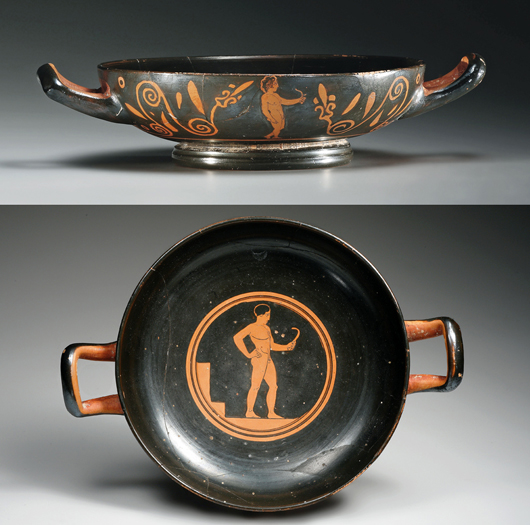 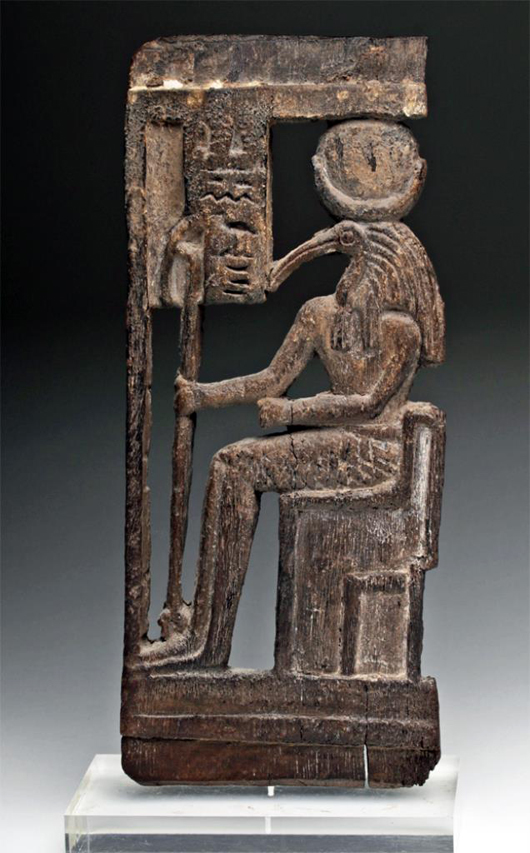 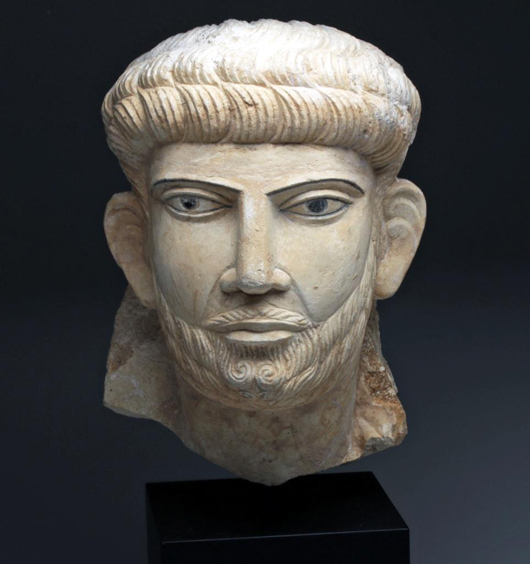 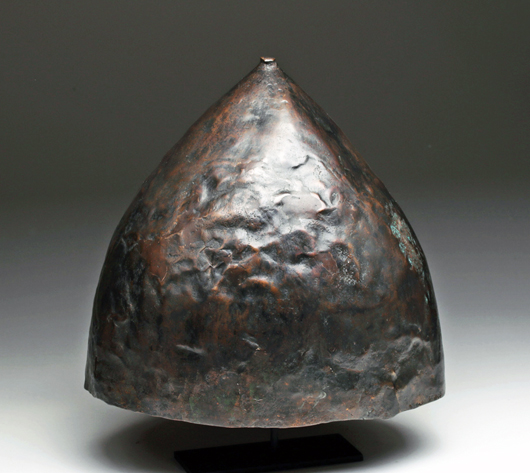 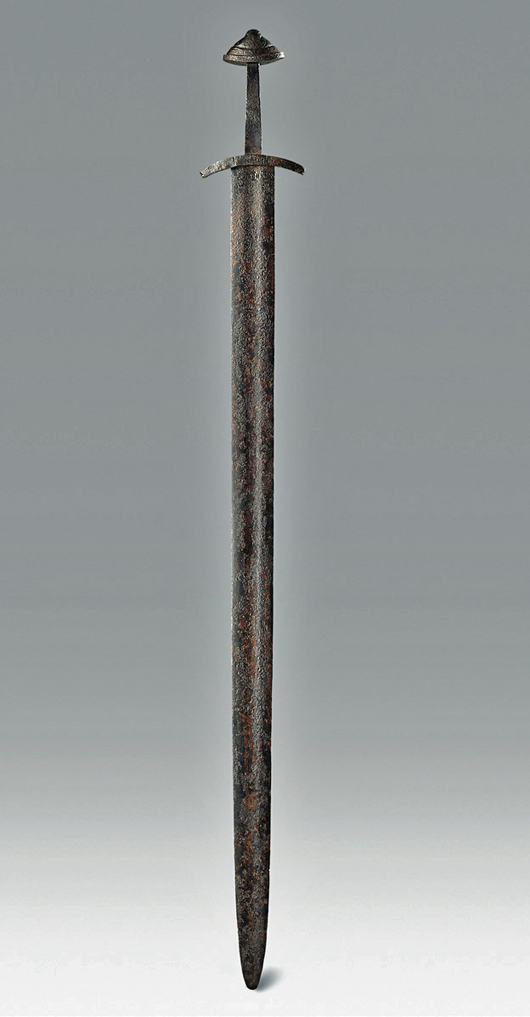 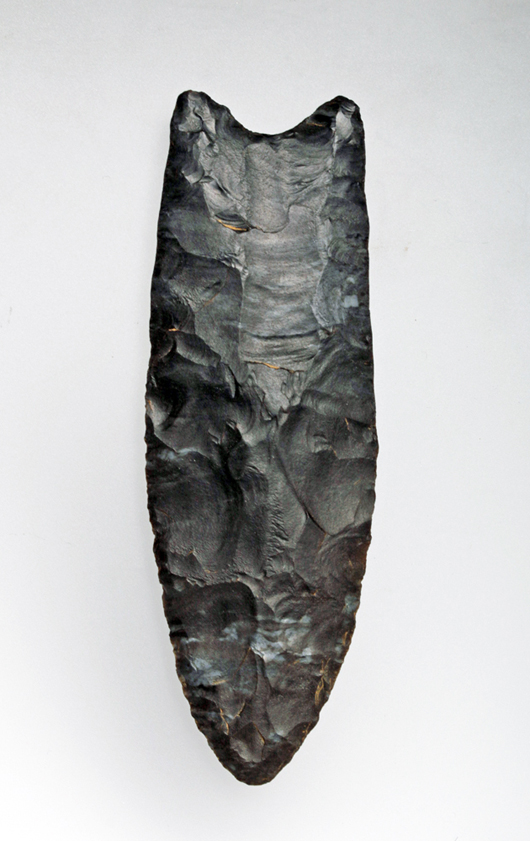 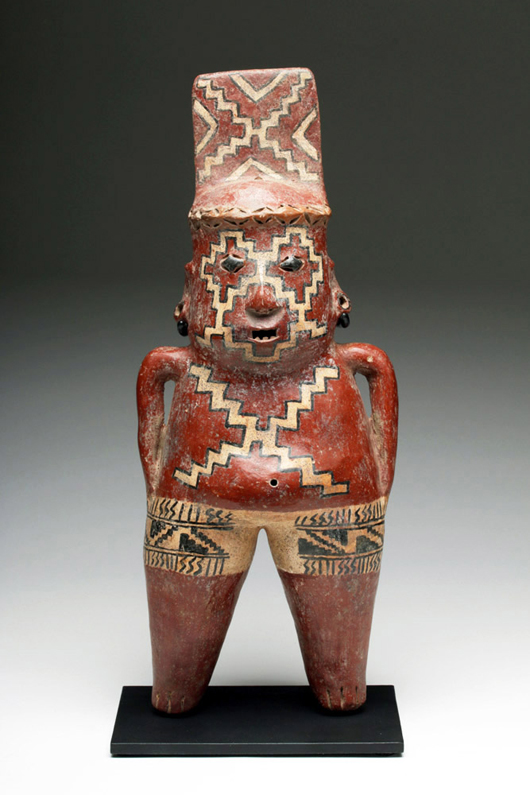 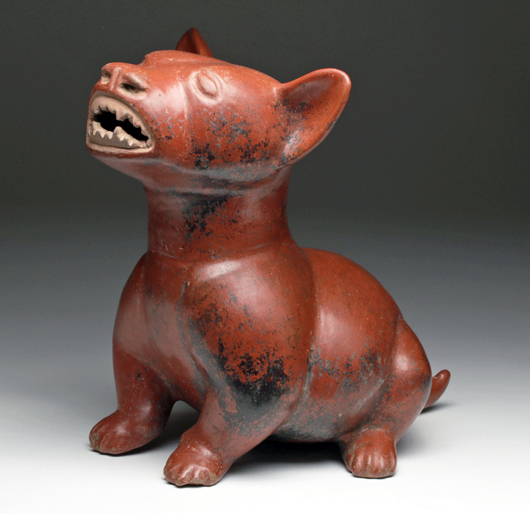 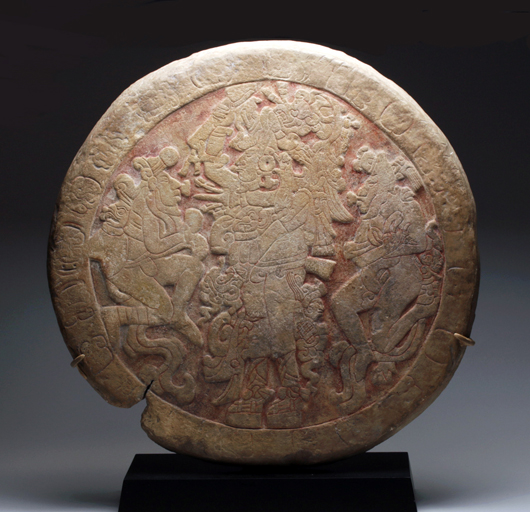 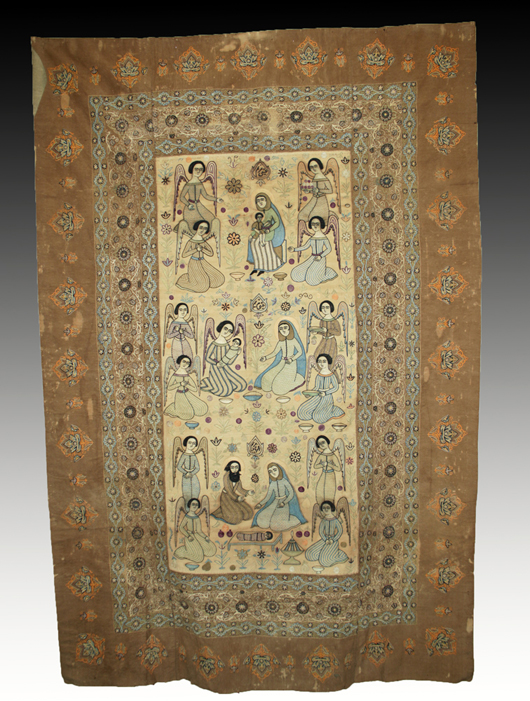