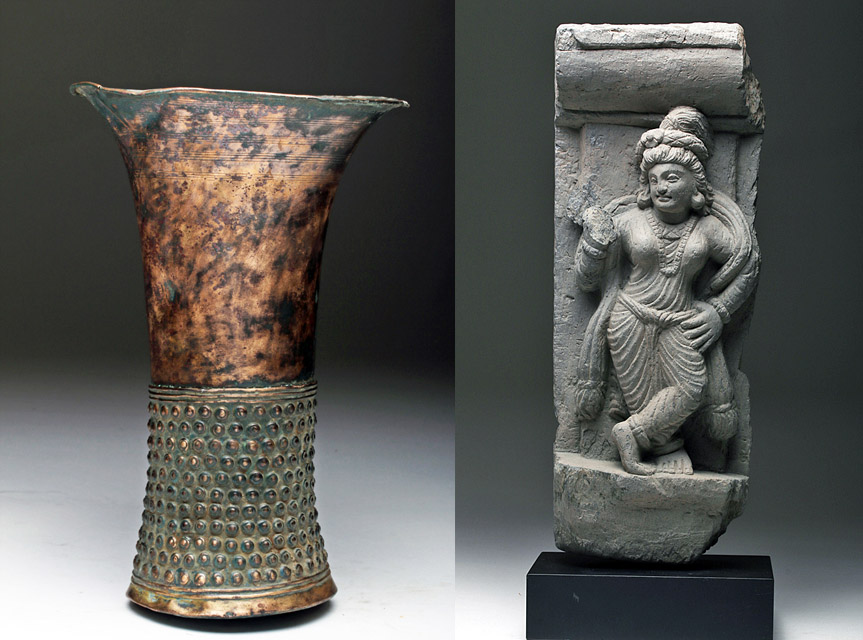 BOULDER, Colo. – The old saying “They aren’t making any more of it” usually comes up in discussions about real estate, but it also applies to ancient antiquities. Great cultural pieces that have survived the ages are in a class of their own, and as their line of provenance grows longer, such treasures become scarcer and less available to collectors. That’s where Artemis Gallery steps in, literally leaving no stone unturned to source authentic antiquities, Pre-Columbian and ethnographic art to offer via the auction method. Their next sale is slated for Friday, July 31, with Internet live bidding through LiveAuctioneers. All auction items are unconditionally guaranteed to be authentic and legal to purchase.

The offering of 300+ lots showcases a global array of superb ancient treasures from Egypt, Greece, Rome, the Near and Far East, as well as South America, Southeast Asia and many stops in between. While advanced collectors will find a plentiful selection of high-end items available to them, those who prefer affordability along with the gallery’s ironclad authenticity may want to focus their attention on the popular Marketplace section, starting at Lot 250. Now a staple of every Artemis sale, this carefully curated grouping of pieces with opening bids as low as $50 is designed to encourage new collectors to discover the relics and art of early civilizations.

The mysteries of Ancient Egypt continue to fascinate the modern world through figures such as the faience sekhmet entered as Lot 1B. Dating to the Third Intermediate Period, circa 1069-664 BCE, the 8½-inch stone sculpture depicts a lion-headed goddess with wedjat eyes, decorated with Egyptian gods and seated on a throne. Formerly in a French private collection and accompanied by its own French passport, the figure is estimated at $4,500-$5,500. 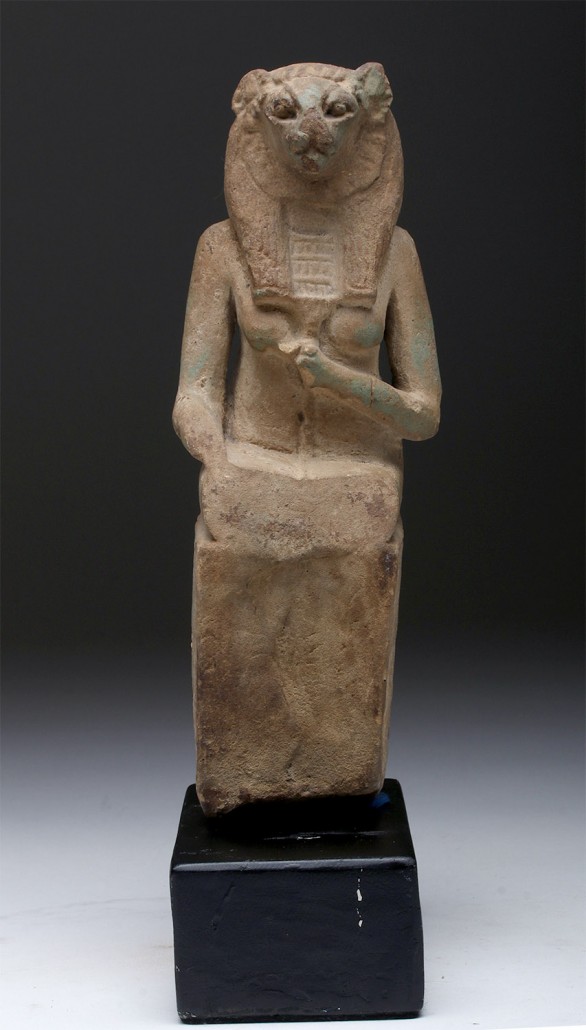 Lot 8C, an Ancient Egyptian limestone stele (engraved funerary pillar) from the Ptolemaic Period, 300-30 BCE, depicts the deceased offering incense to Osiris across a richly laden offering table. Standing 9½ inches tall and formerly in the collection of Maria Segers, the stele is featured in a 1995 book that was published by Museum Vleeshuis in Antwerp, Belgium. Estimate: $4,000-$6,000. 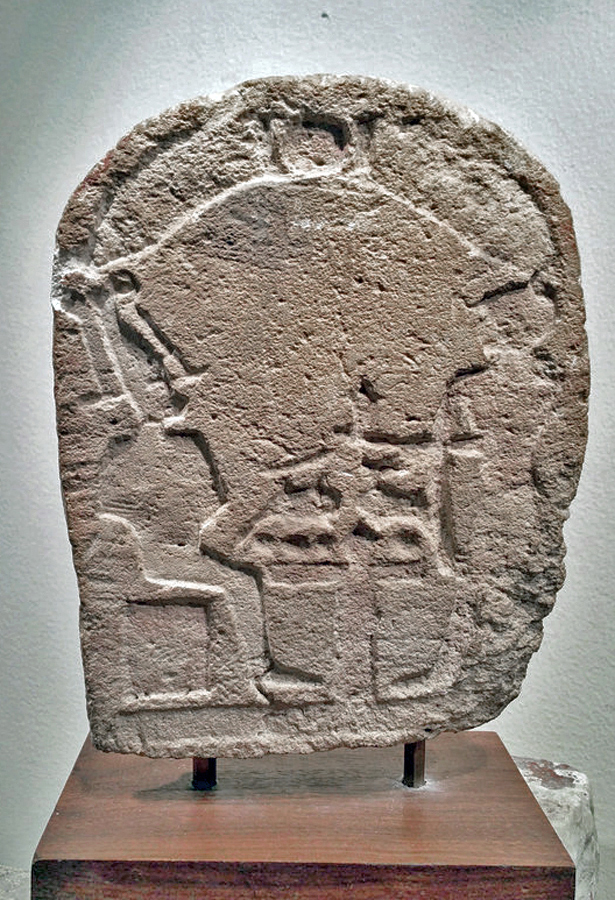 Lot 12B, a beautifully decorated circa 330-310 BCE Greek Campanian bell krater from the Cumae region of southern Italy, has two distinctive scenes encircling its upper portion. Side A shows a draped, seated female holding a patera (libation dish) and tambourine. Its other side features a profile portrait of a Lady of Fashion. This vessel comes with provenance from the Hass collection (1990s) and London Folio Society (1970s), which was the catalog name used by collector Charles Ede. Estimate: $2,500-$3,500. 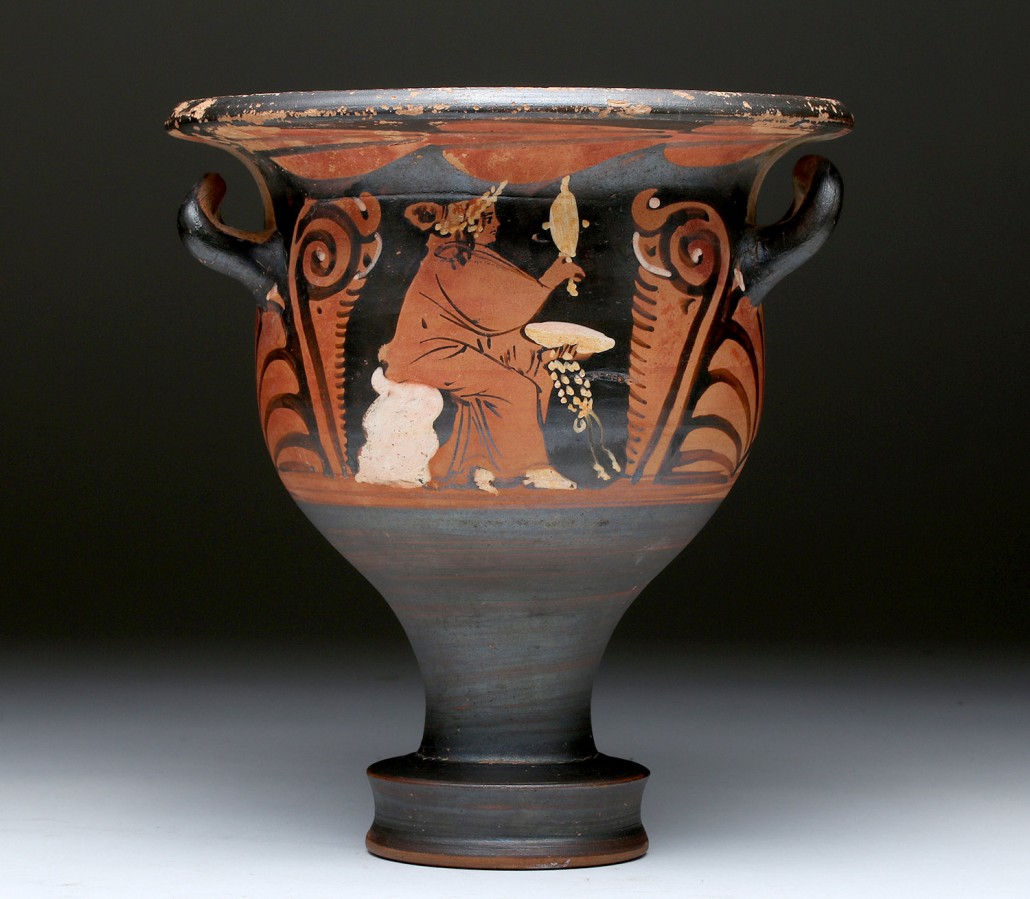 Another Campanian treasure is Lot 12A, a red-figured kylix that has remained in a German private collection since the 1960s and comes to auction with a $5,000-$7,000 estimate.

From a later period of Greece’s fascinating history comes a late-17th-century CE Ionian Islands triptych “Second Coming of Christ,” which is polychrome painted over gold foil on each of its three wood panels. The imagery depicts three of Christianity’s most significant events: the birth of Jesus Christ, the Last Judgment, and the Crucifixion. Formerly in the O’Keefe private collection, New Jersey; and Roebling family collection, this museum-grade piece is cataloged as Lot 13A with an estimate of $1,800-$2,500. 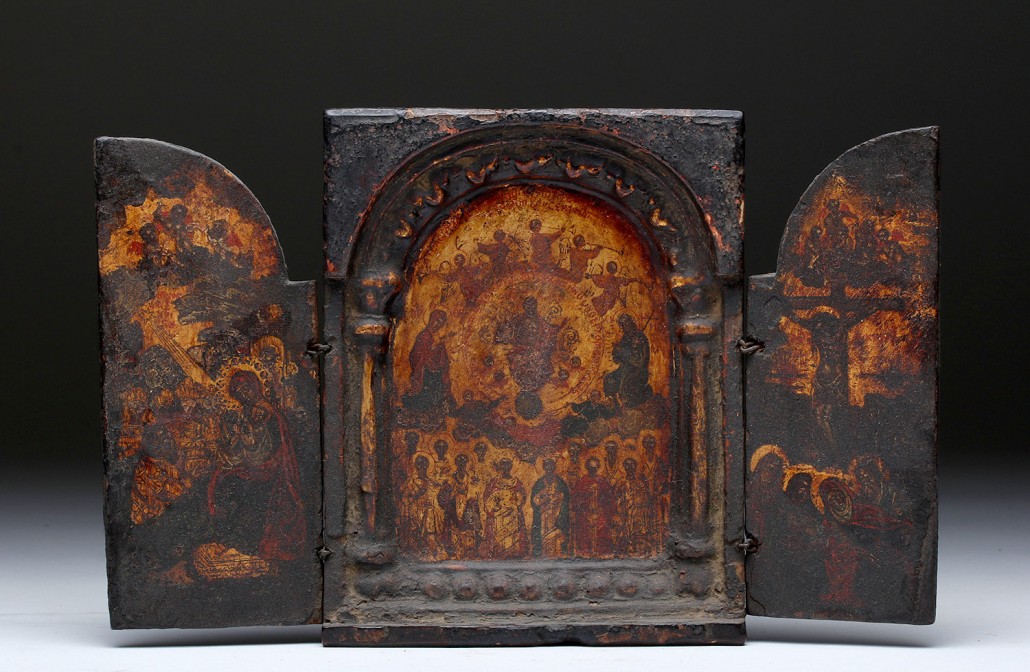 Moving to the Asian section, the auction includes many important pieces, like Lot 32, a wonderfully carved 19-inch Gandharan gray schist frieze of a female deity, 2nd to 3rd century CE, estimated at $9,000-$12,000 (pictured at top); and Lot 34, a Gandharan 15-inch seated Bodhisattva of similar age and composition that is estimated at $5,000-$7,000.

The central figure of Lot 52A, a circa-18th-century Sino-Chinese thangka, is Guhyasamaja Buddha, who represents the union of all of the Buddha clans and is head of the Akshobya clan. Profusely adorned with dozens of depictions of symbolic animals and deities sacred to the Buddhist faith, this thangka measures 30 by 40 inches (framed) and comes from the collection of a Colorado-based mountain climber who scaled some of the world’s highest peaks. While traveling and mountain climbing in Asia, he acquired many examples of precious art, including the thangka, estimated at $3,000-$5,000. 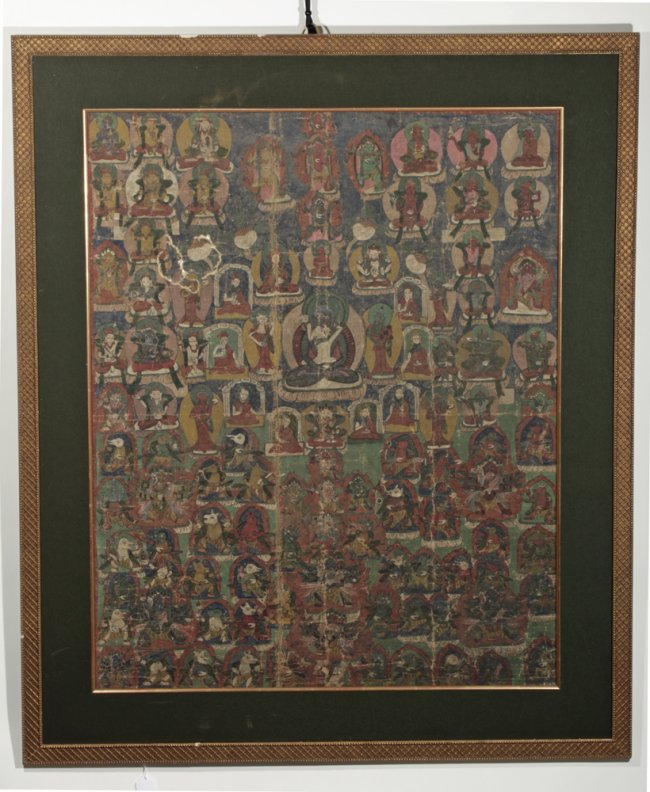 The section featuring art of early Pre-Columbian cultures includes Lot 85A, a Mayan Ulua Valley (Honduras) polychrome vessel with handles fashioned as protruding turtle heads. To the Mayan culture, turtles symbolized, among other things, fertility and the emergence of life from a supernatural state. Formerly in the collection of Emmy Award-winning Hollywood writer and executive producer Donick Cary, this colorful, profusely decorated piece is estimated at $1,500-$2,000. 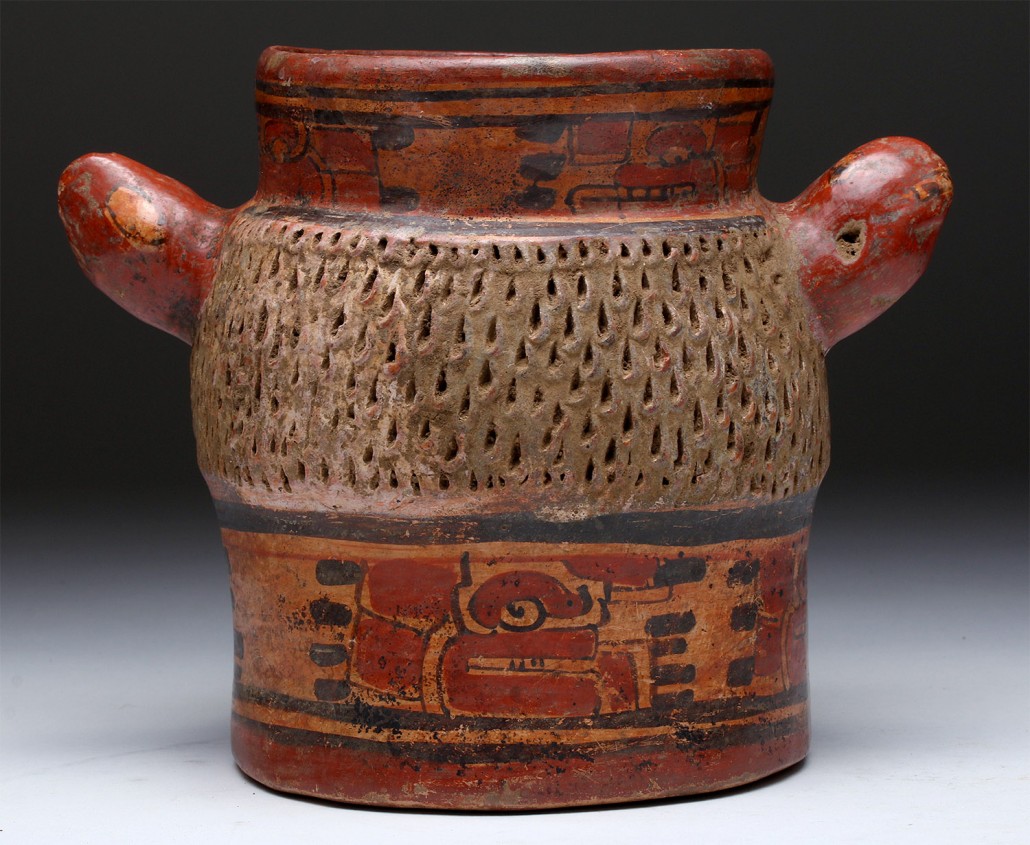 An outstanding selection of Pre-Columbian art and relics will be available to bidders. Lot 99B, a mounted Veracruz (Mexico) volcanic stone hacha (ritual object or trophy) depicting the stylized head of a serpent (pictured below) is 7 inches long and expected to make $6,200-$9,200; while Lot 112, a rare Inca copper and silver ceremonial rattling kero (drinking vessel) that originated in the region from central Peru to northern Chile, circa 1300-1500 CE, is affordably estimated at $900-$1,200. This piece is pictured at the top of this preview. 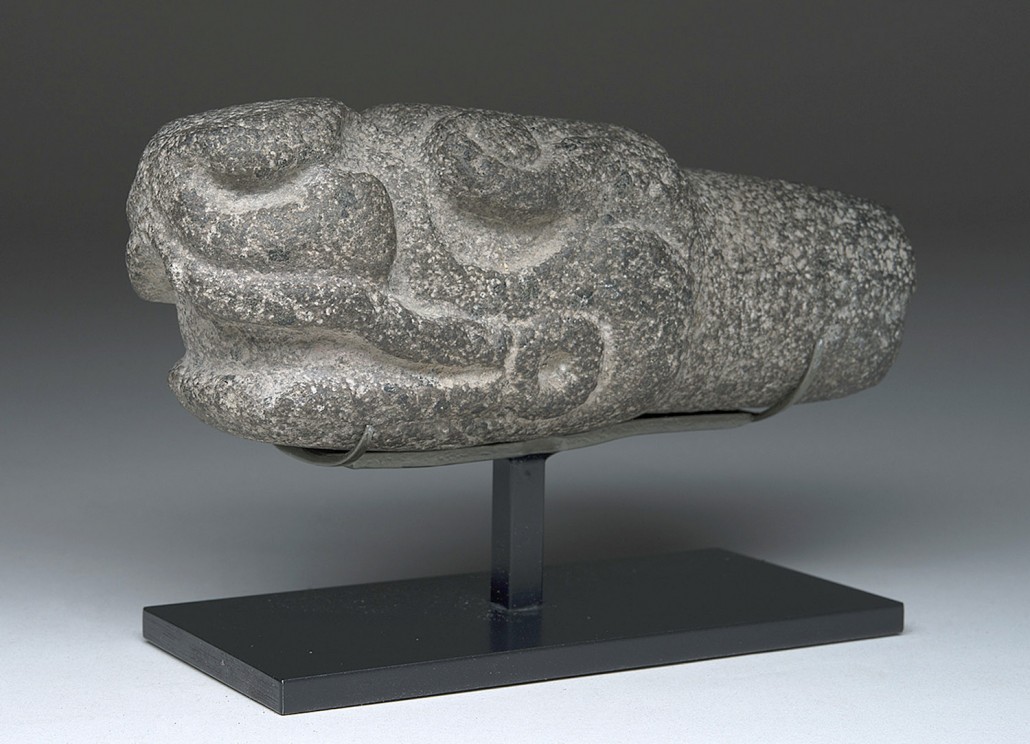 Artemis Gallery will open a virtual jewelry box resplendent with vintage Native-American jewelry, mostly from Zuni and Navajo artisans. Heavy silver bracelets and rings studded with desirable old turquoise and coral exemplify the innovative designs unique to North American tribal silversmiths. Lot 119A is a 1920s Zuni silver cuff bracelet with 86.7 grams of petit-point turquoise stones hand-cut in round, oval and pear shapes. Estimate: $450-$650. A circa-1950 Navajo silver cuff bracelet with intricate alternating rows of chevron-shape and twisted-rope decoration weighs 64.1 grams and comes with provenance from Historia Antiques of Santa Monica, California. Estimate: $400-$800. There are many other high-quality designs with estimates as low as $75.

Forty-one lots of exceptional Spanish Colonial art from the estate of James Caswell (1948-2015) – a renowned collector who owned Historia Antiques – have been entrusted to Artemis Gallery and include artworks from Mexico, Spain and South America. There are many 19th-century Mexican retablos, such as Lot 125, a circa-1885 portrait of Santa Lucia, 13 by 9 inches and estimated at $1,500-$2,500. Lot 122A, a pair of 18th-century Spanish silver reliquaries (miniature portraits), depicts delicately painted saints. The lot carries a $1,200-$1,500 estimate. From Bolivia, a circa-20th-century silver rendering of a crowned lion brandishing a royal standard, with physical similarities to the “leon real” that appears on the Spanish coat of arms, is offered as Lot 131 with a $1,500-$2,000 estimate. Also of silver, a remarkable heart-shape milagro is covered with numerous symbols of Christianity, e.g., Jesus, an angel, Satan, etc., comes from either Honduras or El Salvador and dates to around 1925-1950. Its pre-sale estimate is $200-$300.

Bidders may bid absentee or live online in Artemis Gallery’s Friday, July 31, 2015 auction through LiveAuctioneers. The sale will begin at 11 a.m. Eastern Time. For additional information about any item in the auction, call Teresa Dodge at 720-890-7700 or email teresa@artemisgallery.com.