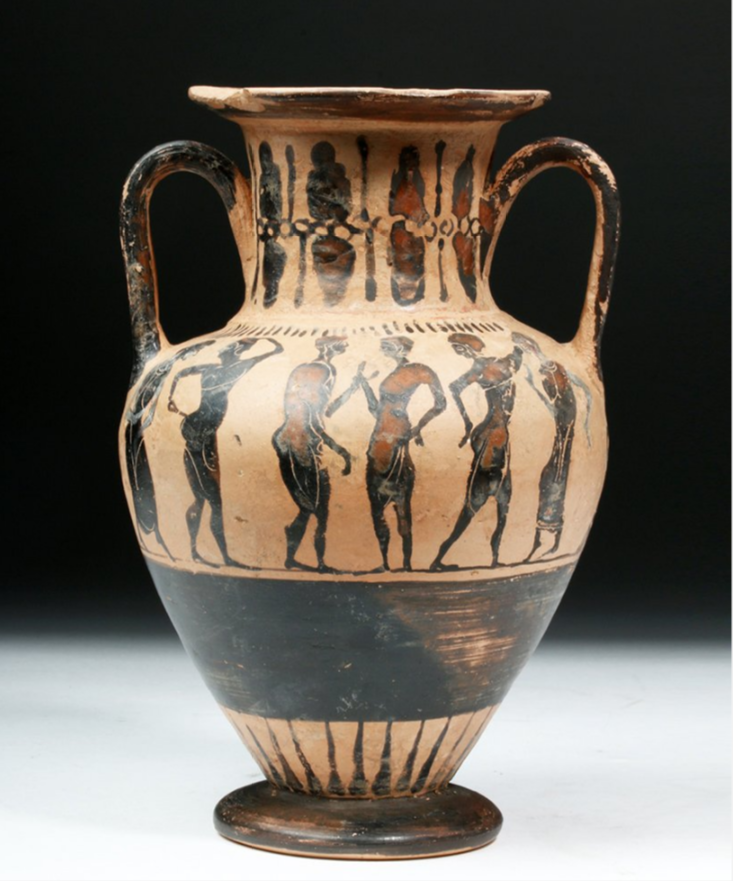 BOULDER, Colo. – Some of the world’s greatest private and institutional collections of antiquities and cultural art are represented in a 357-lot auction set for Thursday, August 3 at Artemis Gallery in Boulder, Colorado. Acclaimed experts in their field, co-owners Bob and Teresa Dodge have left no stone unturned in bringing together a premier selection of art and objects with sterling provenance. The auction includes a sensational array of Ancient Egyptian, Greek, Roman, and Asian treasures, as well as tribal art from Viking, Pre-Columbian and Native American cultures. Two featured specialty categories have been added to the lineup as well: geological and zoological fossils; and coveted William Spratling silver and gold designs, including two exquisite pieces that incorporate, or were inspired by, Pre-Columbian jewelry Spratling took directly from his vault. Bidders are invited to participate absentee or live online through LiveAuctioneers.com.

The Ancient Egyptian section offers collectors a wide variety of art forms, time periods and price points. The sale opens with a bronze figure of the mummiform god Osiris, cast circa 1070-332 BCE. Possibly a votive figure originally held in a temple or displayed as an object of worship in the home of a wealthy family, it stands 11.55 inches high (inclusive of custom wood stand) and has an illustrious line of provenance. It can be traced back to the 1957 Parke-Bernet auction of the Mrs. Charles E. Crawley collection and, later, the renowned Albert J. Zaloom collection. Artemis Gallery’s auction estimate is $60,000-$90,000. 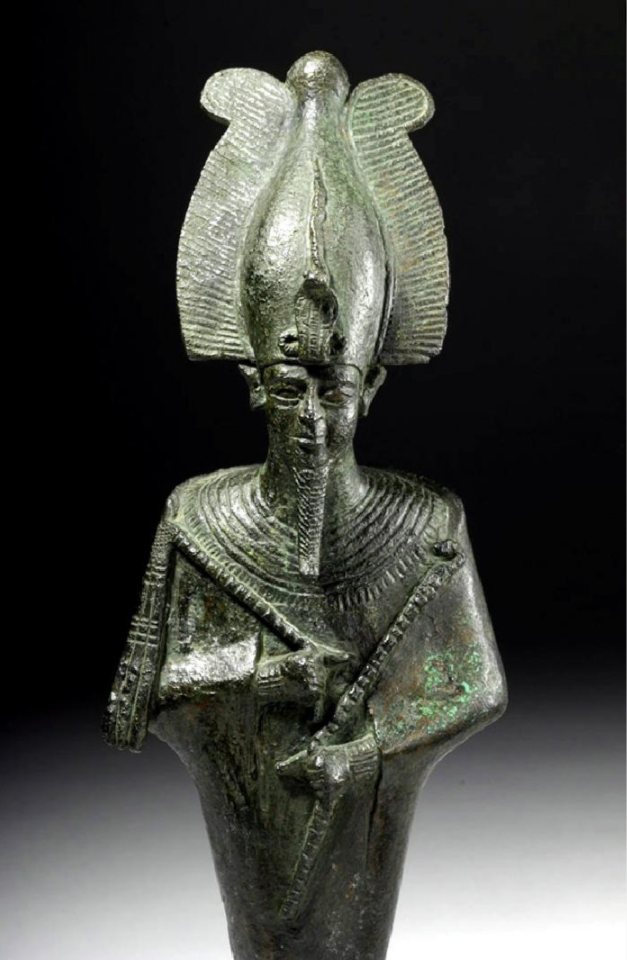 The August 3 auction boasts one of the most exciting selections of Greek antiquities to appear in the marketplace for quite some time. Lot 33, a skillfully carved marble head of a youthful female, perhaps a Maenad, has extremely lifelike, delicate facial features. Dating to the 4th-3rd century BCE, the piece was later part of the Turkish Mavrogodato family’s collection (1870-1948), and was chosen for inclusion in the 2008 book Art of the Ancient World by J. Eisenberg. Estimate: $25,000-$35,000.

Pottery features prominently in the Greek portion of the sale and is led by Lot 21, a profusely decorated circa 7th-5th century BCE Attic/Euboean black-figure amphora (shown at top of page), $8,000-$12,000. Other top examples include Lot 22, an Attic black-figure kylix (drinking cup) with squared handles and painted scenes characteristic of the Lancut Group, $2,500-$3,500; and a Greek Apulian kantharos with a Lady of Fashion portrait, similar to an example in the Walters Art Museum, $1,800-$2,500. Also worthy of special mention is Lot 37C, an Etruscan (Italy, circa 6th-5th century BCE) antefix, or roof ornament, molded in the form of a woman’s head and painted, $10,000-$20,000. 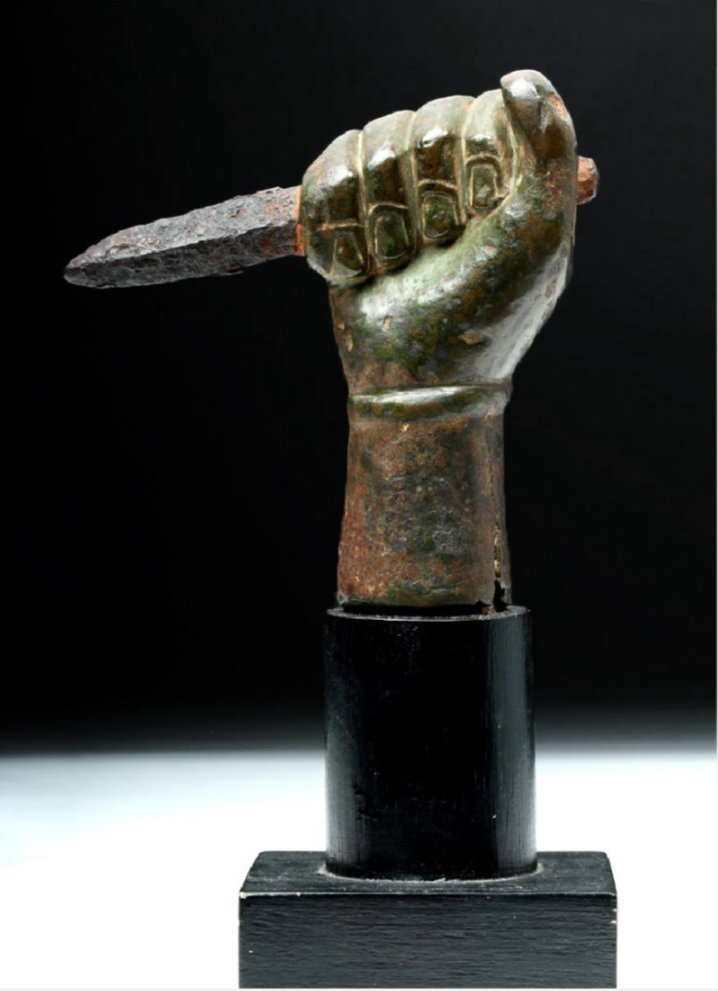 Next in the spotlight is Ancient Rome, with an incredible conversation piece dating from the Imperial Period (circa 1st-3rd century CE) entered as Lot 41A. It is a dramatic and well-detailed cast-bronze hand grasping an iron dagger (shown above). “The image of a Roman hand clutching a dagger immediately reminds us today of the assassination of Caesar, but daggers were famous as assassination weapons long before the Ides of March,” Bob Dodge explained. The lot is expected to make $5,000-$6,500.

The recent premiere of the seventh season of HBO’s Game of Thrones series has heightened interest in Viking jewelry, which is known overall for its high standard of workmanship. The silver Thor’s Hammer pendant is considered a classic of its genre, and Artemis will offer one as Lot 46C in its upcoming sale. Estimate: $1,500-$2,000. The top prize, however, is Lot 44, a circa-10th century CE Viking/Norse Christian cross and chain (shown below) weighing a total of 201.3 grams. It is expected to make $8,000-$12,000. 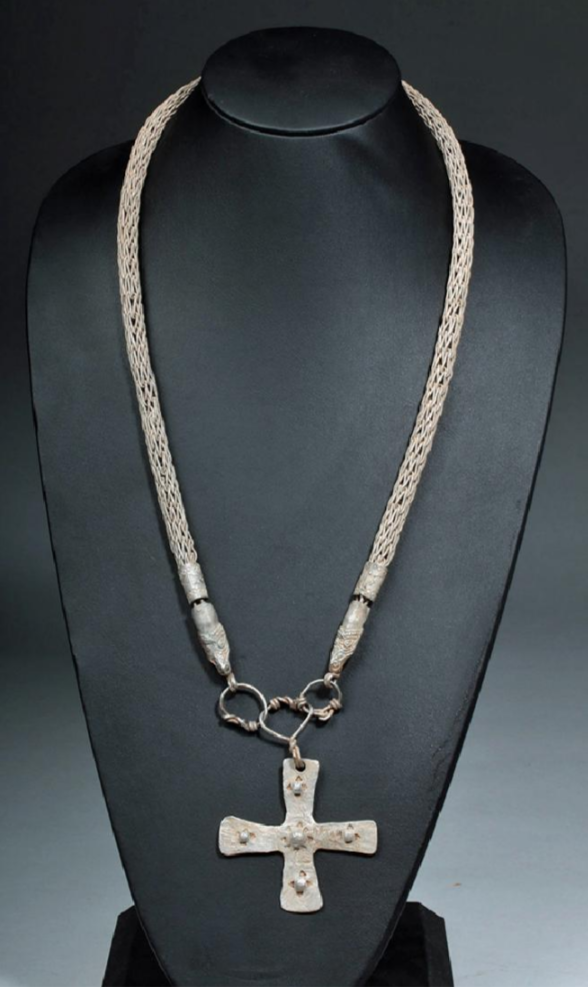 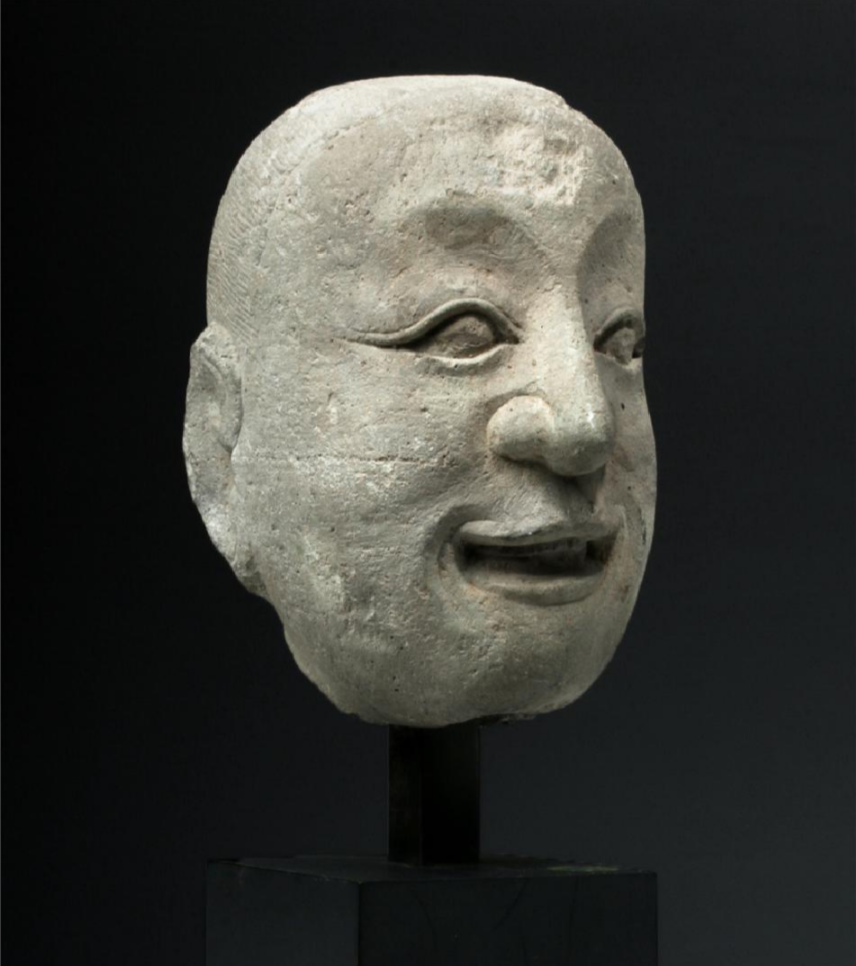 An array of remarkable fossils will cross the auction block. Lot 71A, a huge Campo Del Cielo meteorite found in Argentina and estimated to be 4.5 billion years old. Weighing 11,158 grams, it is one of the heaviest of all known meteorites. Its auction estimate is $4,500-$5,500. Lot 71B, a fossilized European cave-bear hand from the Pleistocene epoch (1.2 million to 24,000 years ago) displays an almost humanlike form, with long, articulated claws. Estimate: $1,200-$1,500. Other curiosities include Lot 101C, a 17th-century egg from the extinct elephant bird of Madagascar, $3,000-$4,500; and Lot 102A, a huge, museum-quality crinoid (sea lily) fossil slab (shown below). This superb specimen found in Morocco and dating to the Devonian Period (circa 400 million years ago) measures 62 inches wide by 42 inches high. Estimate: $15,000-$20,000. 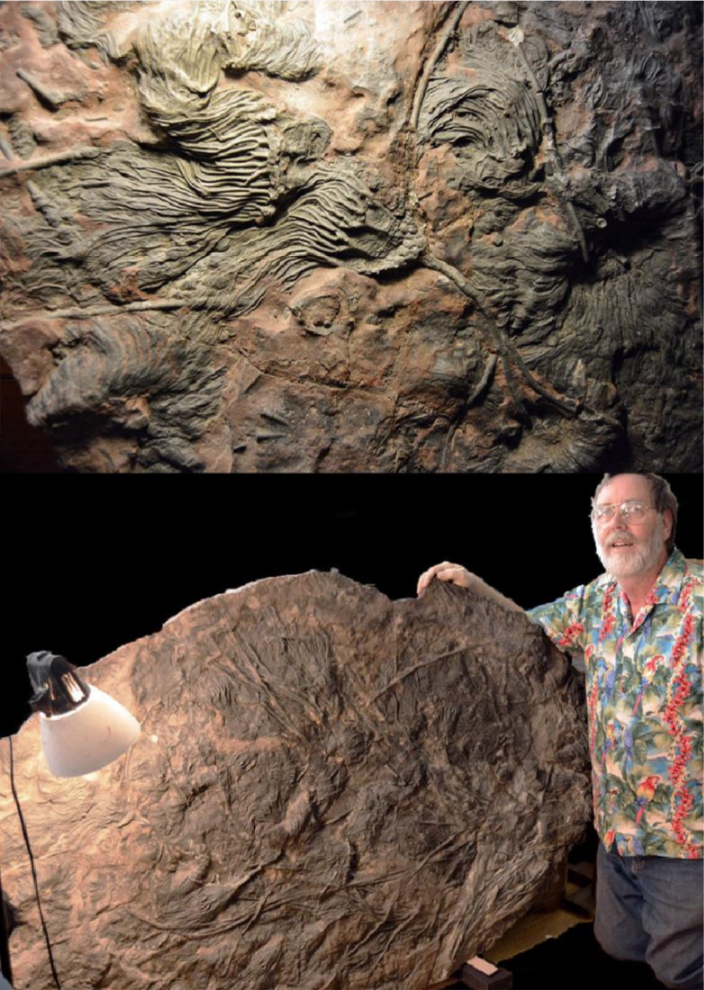 Pre-Columbian rarities abound in the Aug. 3 sale, starting with Lot 80, an exceptional Mayan limestone ball court marker, circa 400-500 CE. This particular marker bears a depiction of a kneeling captive, bound at the wrist and wearing an emblematic device on his back. Encircling him are approximately 16 carved glyphs. Presented on a custom stand, it is one of the auction’s stellar entries and is expected to command a winning bid of $60,000-$80,000. Lot 81, an important Pucara (south highlands of Peru) carved black stone sculpture of a jaguar (shown below), comes with extensive provenance and an analysis report from Fine Art Services, Miami. Estimate: $30,000-$45,000. 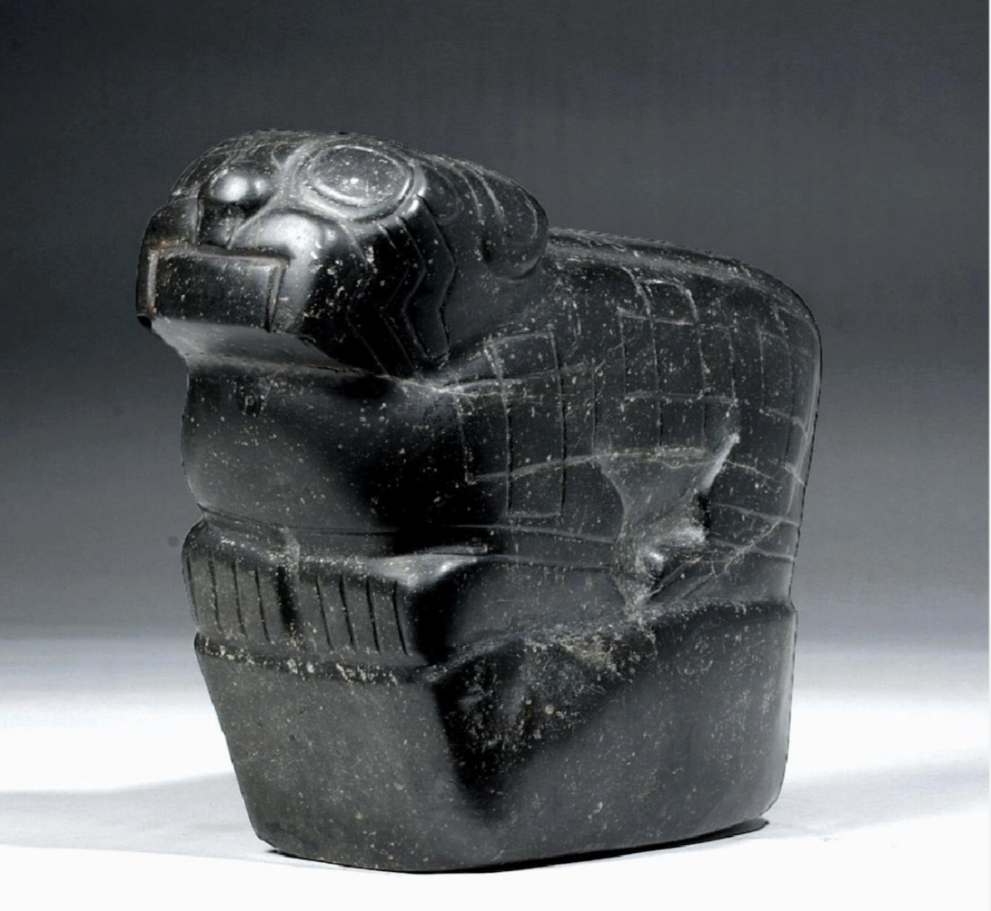 Lot 97A, a stunning 19th-century Navajo sterling silver and turquoise concho belt (shown below), contains a total of 348 turquoise cabochons in a myriad of shades ranging from sky blue to aqua to spring green. Outstanding in every way, it is estimated at $12,000-$15,000. 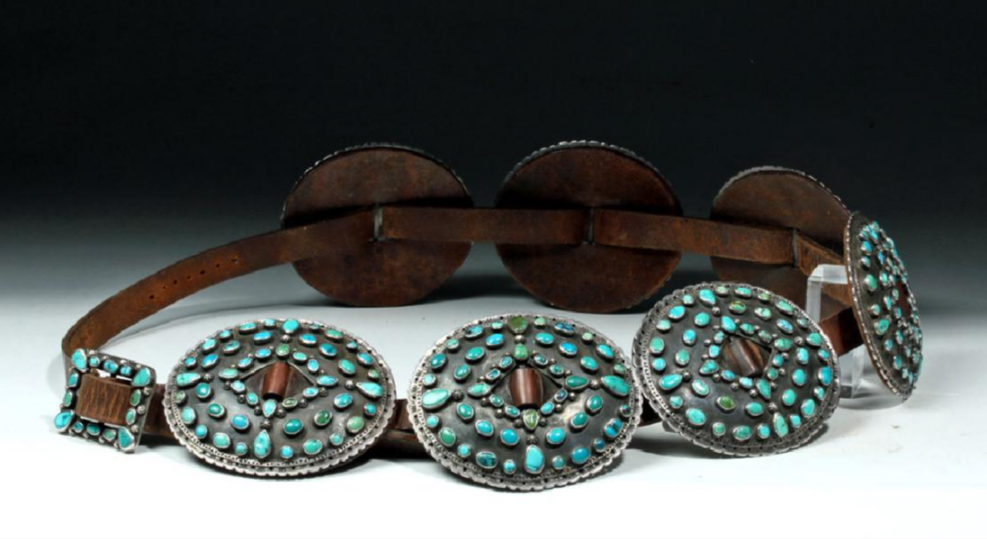 The name “Spratling” is synonymous with perfection in Mexican silver design. Pieces created by William Spratling, the American expat silversmith who revitalized Taxco, Mexico’s silver industry in the early to mid-19th century, are revered the world over. Artemis Gallery is proud to offer three Spratling artworks in its August 3 auction. Lot 115A, a stylish circa 1940-46 hand-hammered sterling silver water pitcher is entered with a $12,000-$15,000 estimate. Two other Spratling designs incorporate, or were inspired by, Pre-Columbian art that came directly from the Spratling vault: Lot 94B, a sterling silver dinner bell with a pair of Olmec/early Mayan-inspired carved-silver moths, $2,500-$3,500; and Lot 95, a pair of spectacular 18K gold earrings (shown below) with carved and string-cut Olmec jade moths, $15,000-$20,000. 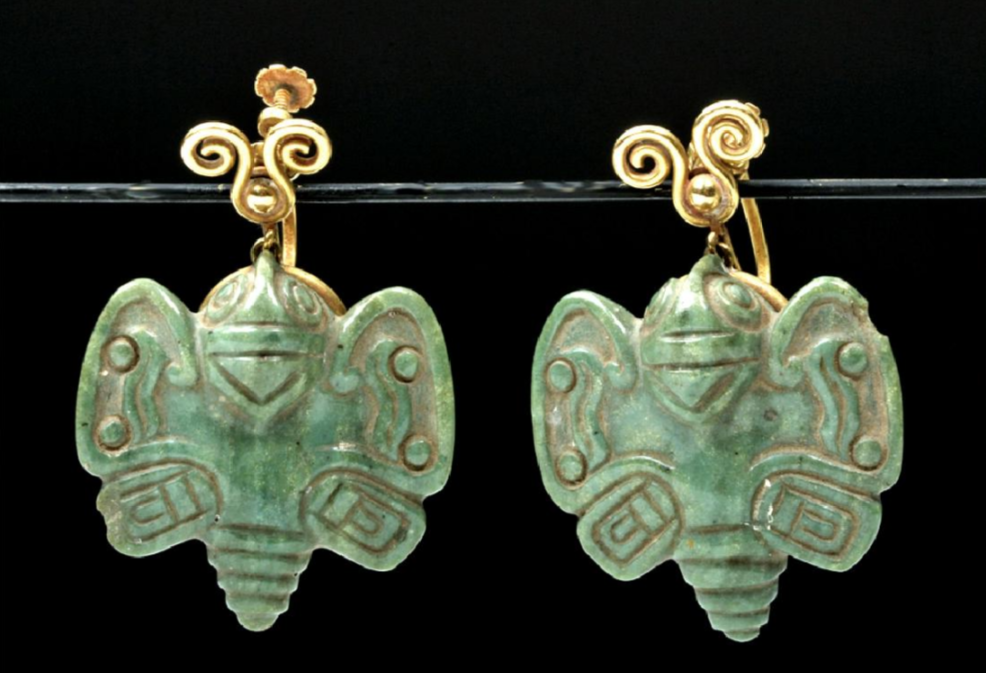 The sale will be conducted live online through LiveAuctioneers.com. All items are guaranteed to be authentic, as described in the auction catalog, and legal to purchase and/or resell. An Artemis Gallery COA will accompany each auction lot. For additional information about any item in the auction, please call Teresa Dodge at 720-890-7700 or email teresa@artemisgallery.com.