Ruth Asawa (American/Japanese, 1926-2013) ‘Hanging Five-Lobed Continuous Form with Spheres Inside Four of the Lobes, Two of the Inside Spheres Containing Spheres within Them,’ c. 1954. Keno Auctions image.

NEW YORK – On Wednesday, Oct. 1, Keno Auctions will conduct its sale of Modern and Contemporary Fine Art & Design starting at noon. Fifty lots will be offered, featuring stellar examples of modern and contemporary design with a small but superb selection of 19th century paintings.

“We are very excited to present our first sale of modern and contemporary fine art and design,” said Leigh Keno, of the eponymous full-service auction house, referring to his 50-lot sale, which will take place in the intimate gallery setting of his late 19th century Upper East Side townhouse. The auction will showcase the best in modern and contemporary furniture by such design luminaries as Gio Ponti, Carlo Mollino, Wharton Esherick, and Zaha Hadid, as well as several important works by American art and design icons including Alexander Calder, Ruth Asawa and Cindy Sherman, including significant treasures from the John W. Freeman collection.”

Keno said that Freeman has had a life-long interest in Modernism—particularly sculpture—and his friendships with many artists over the past six and a half decades, including Alexander Calder, Louise Nevelson and Elie Nadelman is evidenced by their gifts to him including a set of spiral silver cuff links made by Calder in 1955, as a 27th birthday present for Freeman. (This work is registered in the archives of the Calder Foundation, New York, under application number A267 95).

In 1954, Freeman purchased a monumental 103-inch-by-21-inch woven iron and brass wire hanging sculpture by the important Japanese-American artist Ruth Asawa, from her first solo exhibition at Peridot Gallery in New York. According to Freeman, on the night of the party when Calder gave him the cufflinks ($4,000-8,000), one of the things Calder first noticed, hanging at the end of the long living space, was a nearly 9-foot-high hanging sculpture by Ruth Asawa “I think that he was quite impressed by the piece; I doubt if he had seen her work before,” recalls Freeman.

From the estate of Dr. Alfred Ziviello, a longtime client and friend of Leigh Keno comes an impressive collection of modern art by important artists including, a 1980 Monotype by Sam Francis and a unique, incised and glazed ceramic dish created in 1953 by famous French artist Marc Chagall.

Here is a sampling of several of the top featured lots:

– The low table by Carlo Mollino Model #1114, c. 1950, is beautifully conceived to resemble a reclining female and is constructed of acero (Italian maple). Mollino’s furniture is among the most sought after in the world. A very small number of these tables were made; this example retains its original finish on the acero. Estimate: $70,000-100,000.

– Hendrik Willem Mesdag (Dutch, 1831-1915), Return of the Fishing Fleet at Sunset, 1873, oil on canvas, Signed and dated “H. W. Mesdag 1873” lower left, 27 x 34 1/2 inches. Estimate: $50,000-100,000. This stunning painting by Mesdag has been a private collection for more than a century. The original owner, Edouard Pierre Albert Thys (1868-1914), was a leading citizen of Antwerp and banker during Belgium’s belle epoque before the First World War. Importantly, Return of the Fishing Fleet at Sunset is related to a sketch entitled Bomschuit op het strand featured in J. Poort’s catalogue raisonné, now in the archives of Museum Vlaardingen in Holland. Among numerous residences, Thys and his wife, Helene Therese Marie Cateaux Thys (1869-1933), maintained a castle in Brasschaat and built a mansion at 91 Boulevard Leopold in Antwerp, which is now the Ridder Smidt van Gelder Museum.

– Seymour Joseph Guy (American, 1824-1910), The Piano Lesson, c. 1884, oil on board, 16 1/8 x 12 inches. Estimate: $8,000-12,000. The Piano Lesson dates from about 1884. The two figures in the composition are closely related to the pair of mother and daughter that appears in See-Saw Margery Daw (1884, Location Unknown – reproduced in American Paintings from the Landon Collection [Charlotte, North Carolina: Mint Museum, 1979], p. 51) which also explores the subject of motherly affection. The models for the figures are not known, but it is likely that the young girl is one of the artist’s nine children, who formed a veritable storehouse of potential models for his brush. As in many of Guy’s works, a beautifully designed and well-crafted piece of furniture (here a piano) appears in the right foreground, and leads the viewer’s eye into the composition while forming a fascinating structure in its own right.

Also in the sale are two paintings of note from the estate of Dr. Alfred Ziviello:

– Sam Francis (American, 1923-1994) Untitled, 1980 monotype with dry pigments, inks, and oils on handmade paper Signed in pencil “Sam Francis” lower right Inscribed in pencil “EXP-SF-37-02- ’80” on verso, lower right 30 3/4 x 25 1/4 inches.Estimate. $12,000-18,000. Executed in 1976, this work is identified with the interim identification number of “SFM80-875” in consideration for the forthcoming Sam Francis: Catalogue Raisonné of Unique Works on Paper. This information is subject to change as scholarship continues by the Sam Francis Foundation.

From the estate of Herman Krawitz, are paintings by the Israeli/American artist Boaz Vaadia (born 1951). In 1986, Krawitz purchased two works by Israeli-American artist Boaz Vaadia at one of his first New York City exhibitions. Vaadia incorporates refuse material from the area surrounding his SoHo studio such as slate, shingles, boulders and bluestone to create figural sculptures with universal features.

Ruth Asawa (American/Japanese, 1926-2013) ‘Hanging Five-Lobed Continuous Form with Spheres Inside Four of the Lobes, Two of the Inside Spheres Containing Spheres within Them,’ c. 1954. Keno Auctions image. 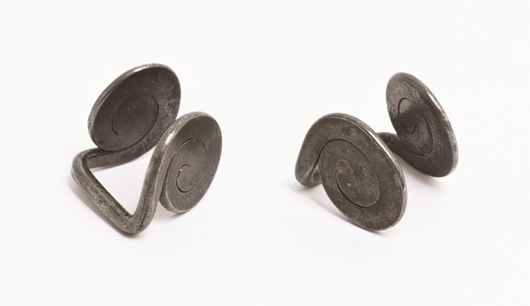 Set of spiral silver cuff links made by Calder in 1955 version. This work is registered in the archives of the Calder Foundation, New York, under application number A267 95. Keno Auctions image. 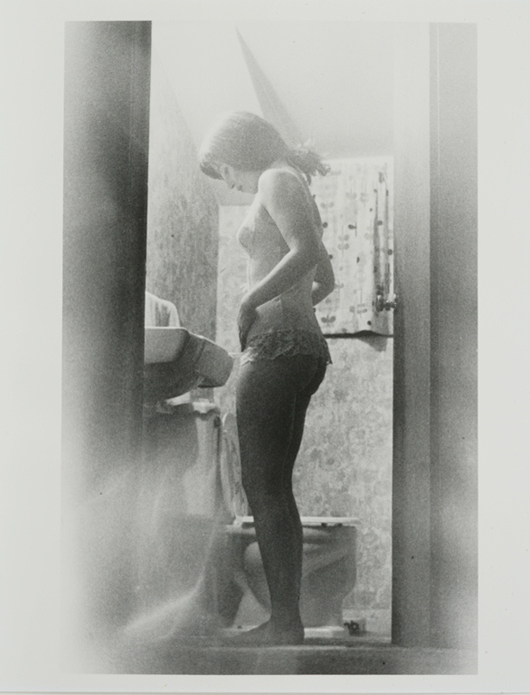 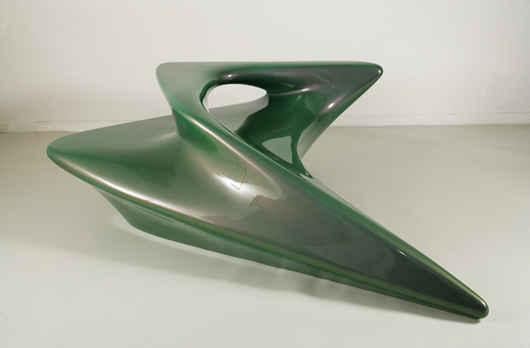 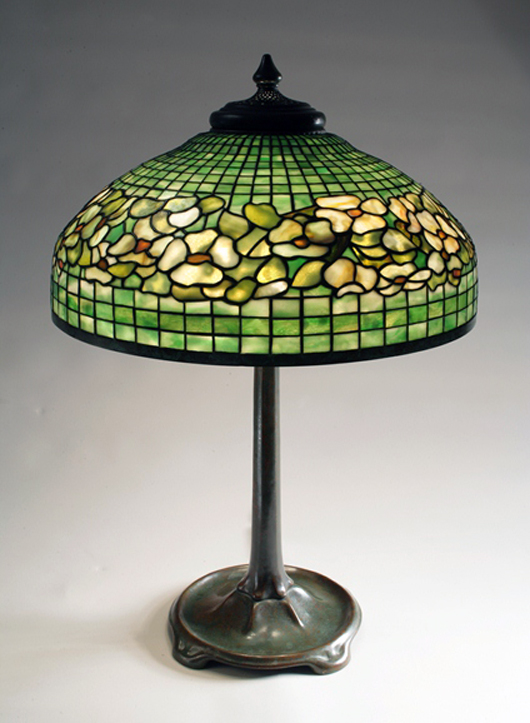 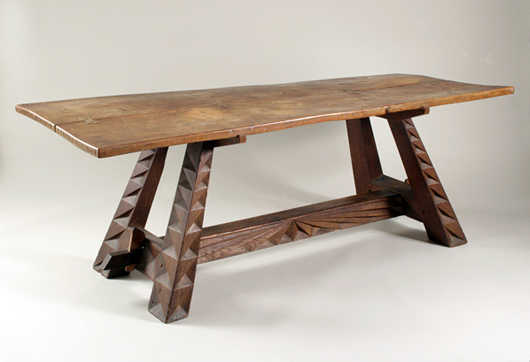 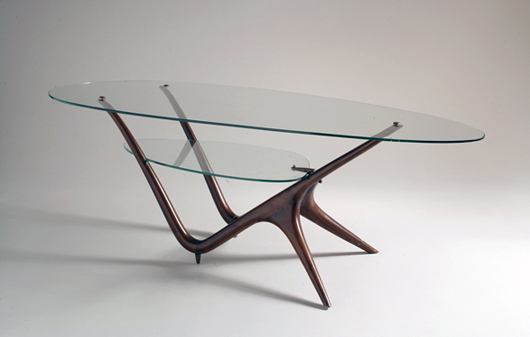 This low table by Carlo Mollino Model #1114, circa 1950, beautifully conceived to resemble a reclining female and is constructed of Acero (Italian maple). Keno Auctions image. 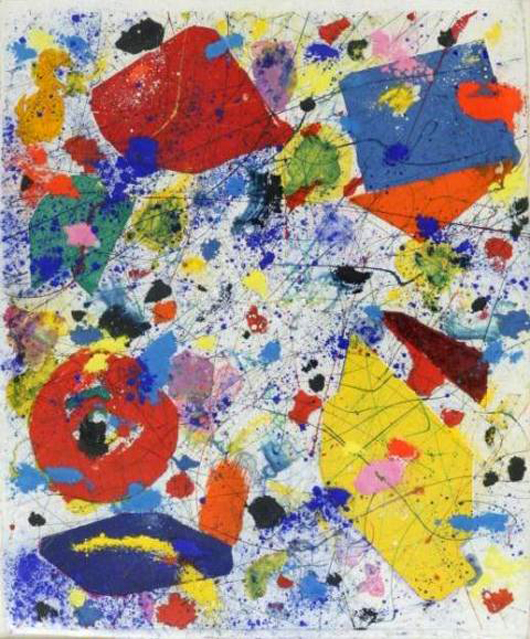