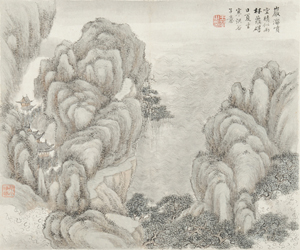 BOSTON – Skinner Inc. will host an auction of Asian Works of Art on Sept. 21-22 in its Boston gallery. The market for fine Asian material continues to flourish, attracting international interest and record prices. With over 950 lots on offer, the Skinner auction features rare and important Chinese, Korean, and Japanese artwork and antiques.

LiveAuctioneers will provide Internet live bidding. Friday’s sale, which begins at 11 a.m. EDT, will consist of 431 lots. Saturday’s sale will also begin at 11 a.m. is composed of more than 550 lots.

An impressive group of jades highlights the sale. Among the selection of fine animal jades is a recumbent ox (lot 670, estimate: $80,000-$100,000), the stone of celadon color with pale pink, gray and deep green inclusions. An important mountain boulder (lot 728, $20,000-$25,000) is carved with pine trees and rocks from celadon stone with large russet inclusions. This jade comes from the collection of Lynn Perry Alstadt, founder of the American Bonsai Society. A fine, 19th century Guanyin (lot 696, $3,000-$5,000) with flowing robes and holding a lotus blossom is carved of translucent celadon stone. This Buddhist figure comes to Skinner from the private estate of a local New England family who purchased the piece in Europe.

The September sale features several hundred paintings. One particularly striking piece is a Chinese album of paintings (lot 295, $100,000-$150,000) attributed to Wang Hui (1632-1717). This eight-page album of landscapes was part of the same private collection, as the Guanyin, and has been in the family for 50 years.

A large, horizontal landscape (lot 270, $80,000-$100,000) is attributed to Zhang Daqian (1899-1983). Daqian, a contemporary artist, often painted in the older traditional styles, exemplified by this work. Both his traditional and contemporary paintings are in great demand.

A rare, blue and white charger from Iran dating to the 17th century (lot 791, $10,000-$15,000) is an example of one of the many exceptional works represented in the sale coming from outside of China. At over 21 inches in diameter, the large charger is decorated with a central image of freely painted pagodas, bridges, rocks and palm.

Originally from the collection of William Ball of Ball Mason jars comes a pair of rare 19th century tall Chinese porcelain vases with underglaze blue and enamel decoration of peacocks perched on rocks amidst peonies, chrysanthemums and other blossoms (lot 786, $40,000-$50,000).

A dozen notable lots of Peking glass are up for bid including a rectangular maroon and yellow snowflake bottle depicting a phoenix flying amid clouds with a lingzhi sprig in its beak and a dragon chasing a flaming pearl above rolling waves (lot 890, $2,000-$4,000). A baluster-shape vase with white and green overlay depicting a hunting scene (lot 891, $4,000-$6,000) and a Chinese export vase decorated with two vignettes showing figures at leisure in private courtyard scenes (lot 893, $4,000-$6,000) will also be offered.

The auction presents a fine offering of bronze mirrors, highlighted by a Chinese mirror from the Song Dynasty depicting a scene representing the story of Cei Fei, the dragon slayer (lot 499, $5,000-$7,000). These mirrors were intended to reflect a person’s inner qualities, rather than the outer appearance. 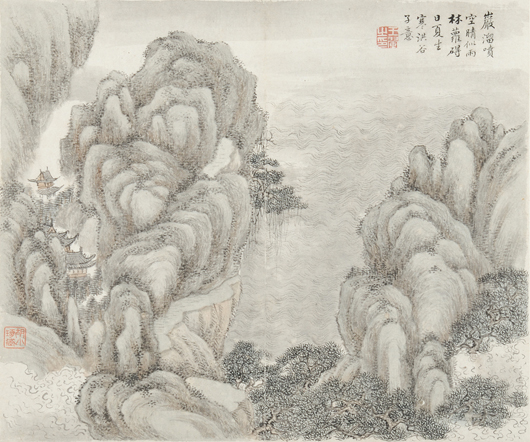 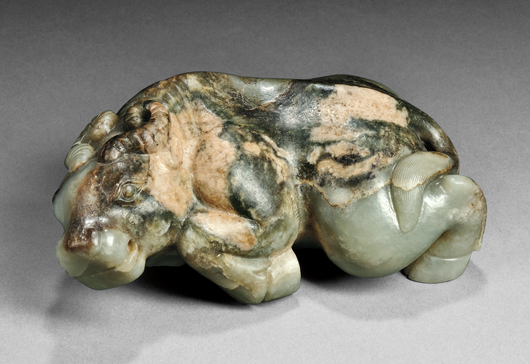 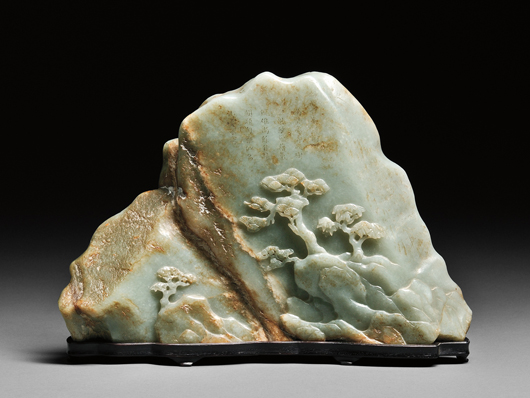 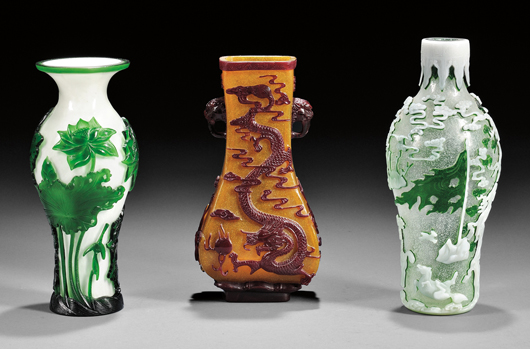 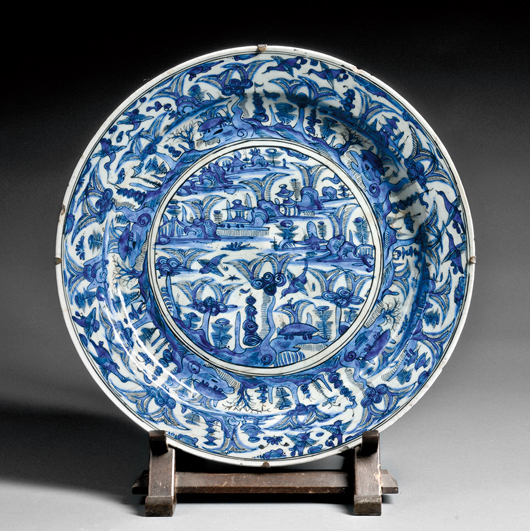 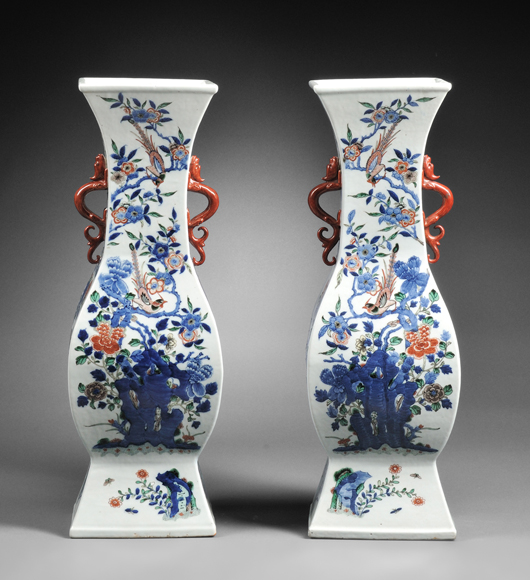