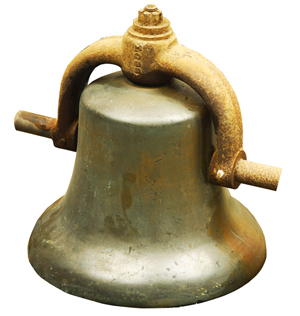 WACO, Texas – There is no more enduring symbol of how the Old West became part of the New World than the American railroad, with its steam-powered “iron horses” that linked East to West. It is the lifelong fascination with early trains and the culture that surrounded them that inspired the late Roy Gay’s 65-year collection of railroadiana, which will be auctioned in its entirety on March 10-11. A&S Antique Auction Co., specialists in Western Americana, will conduct the sale of the approximately 2,000-piece single-owner collection at its Waco, Texas gallery, with Internet live bidding through LiveAuctioneers.com.

“Mr. Gay, who passed away on January 11th of this year, gave his whole working life of 40-plus years to the Union Pacific Railroad. He was an auditor for the company and traveled a three-state region in the course of his job, so that opened all the necessary doors to acquire railroad relics. When a depot closed down, he would know about it and be in a position to buy the pieces he wanted,” said A & S’s owner Scott Franks.

Roy Gay’s collection of lanterns, railroad advertising signs, tableware, tinware, whiskey crocks and literally anything else that would have been part of a train journey from the late 19th- through mid-20th centuries grew to such size that an unusual step was taken.

“This was the worst case of a passionate collector I’ve ever seen,” Franks said with a chuckle. “When he retired, Mr. Gay bought the old railway station at Troup, Texas, and literally had it moved to his East Texas farm. Later, Mr. Gay spent $35,000 to restore the station, which is where he displayed his remarkable collection.”

Most of the items Gay collected are from the “golden era” of railroads – the 1880s through middle “teens” – with a smattering of later objects whose timeline ends around the 1970s.

The Waco auction gallery’s walls are a spectacle to behold with the massive sub-collection of approximately 160 railroad lanterns now on display. Many of the lanterns have green, ruby and amber colored glass panels; while a few were made with richly hued cobalt-blue glass. Franks noted that most are signal or switch-type lanterns made by Dietz or other manufacturers. Each is marked with the name of an American railroad.

Additionally, there are some very scarce inspectors lanterns with matching IDs on the casing and globe components, and one particularly rare presentation lantern. The grouping also includes many as eight brass firemen’s lanterns, which have a distinctive shape and large, rolled handles that prevented the user’s hands from getting burned.

“The lanterns will be accessible to every level of collector,” said Franks. “Their book values range from $50 to $700 apiece.”

Franks predicts crossover competition from antique advertising collectors for the scores of old railroad signs in the Gay collection. Highlights include a beautiful, all-original circa 1890-1930 MKT porcelain sign, conservatively estimated at $2,000-$3,000; and a 36-inch-diameter “buzzsaw” sign, referring to its serrated edges, which advertises Texas Pacific Lines on one side and Missouri Pacific on the other. Franks explained that the sign would be flipped over when a train crossed a state line where one or the other of the companies had jurisdiction.

Every train had a galley where beverages and other liquids were stored in crocks. One- and 2-gallon examples marked with railroad names are part of the Gay collection, as are more than 100 crocks marked for brands of whiskey and other alcoholic beverages; saloons and taverns.

“Right now, whiskey crocks are one of the hottest tickets in the auction market,” said Franks. “Mr. Gay’s crocks are marked with the name of a person or company, and also, in many cases, the location where the whiskey was distilled. They represent old-time whiskey companies from Texas all the way up to New York. We think collectors are going to really get excited when they see this selection.”

Many items kept train passengers occupied on long journeys of a century ago, and nearly all were marked with the names of particular railroads. Among the convenience articles to be auctioned are ashtrays, playing cards (some with an African-American theme), dozens of paper hand fans with advertising, blankets and numerous cast-iron footstools that ladies and children would step onto when boarding a train.

Manly metal from the steam-train era will be front and center on auction day, with such contents as railroad-branded locomotive engine bells, spittoons, and brass railroad locks and keys; plus an extremely rare cast-iron stove made by Hart Mfg. of Louisville, Ky., and embossed with the word “Caboose.” Auctioneer Franks, who has handled numerous railroad items over the years, said it is the first of its type he has ever seen.

Framed decorative artworks from train stations of a bygone era are led by a spectacular panoramic, shadowboxed wildlife photo titled “An Elk Lodge in the Jackson Hole Country Reached via the Union Pacific System.” Measuring 48 inches wide by 12 inches high, the circa-1920s picture was taken on the Steven N. Leek resort lodge and ranch, an elk refuge in Grand Teton National Park, Wyoming. Leek’s Lodge, which was listed on the National Register of Historic Places, was destroyed by fire in 1998.

The auction offering contains many other desirable railroad mementos, such as caps from conductors, inspectors and engineers; railroad passes, railroad station thermometers that advertise train lines and various products, and 75-80 pieces of railroad-marked tinware for use with diesel cans and other containers.

In addition to railroad antiques, the Roy Gay collection includes an extensive selection of early automobilia, 30 to 35 gas pump globes, an 8ft. Mobil Pegasus sign and other advertising; and even a beautiful emerald green 1929 Model A rumble-seat Ford. The car has always been garaged and is drivable.

View the fully illustrated online catalog and sign up to bid absentee or live via the Internet at www.LiveAuctioneers.com. 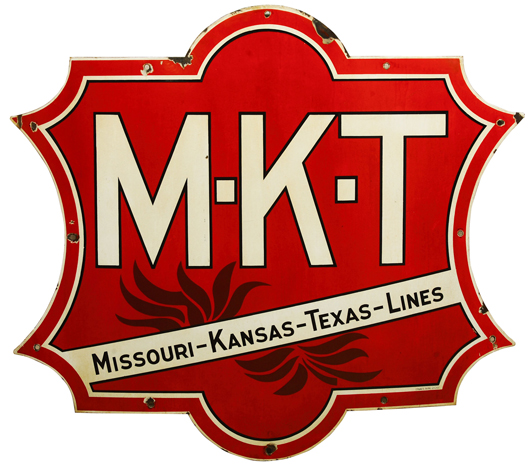 Railroad sign whose design was in use from 1890-1930 to advertise MKT (Missouri-Kansas-Texas Lines), one of a multitude of signs in Roy Gay collection. A&S image. 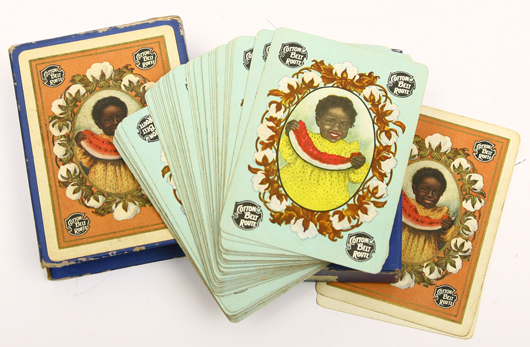 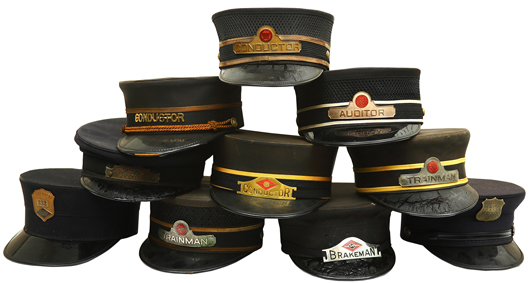 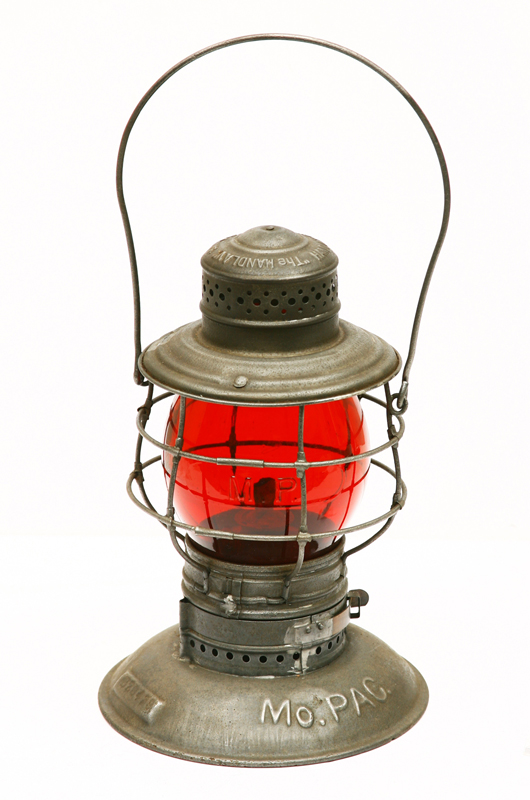 This MoPac (Missouri Pacific) railroad lantern with ruby-colored glass is one of approximately 160 lanterns from various train lines in the Roy Gay collection. A&S image. 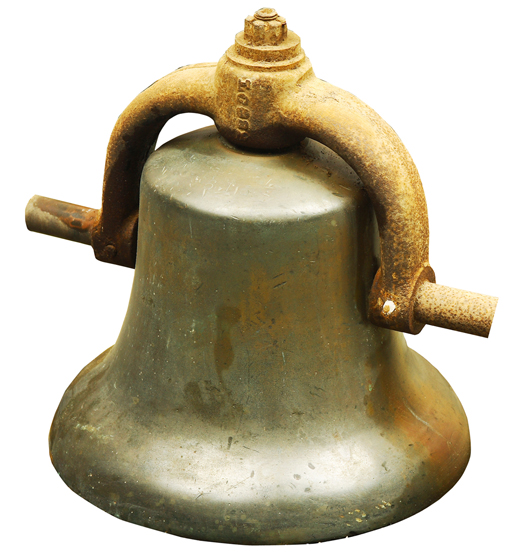 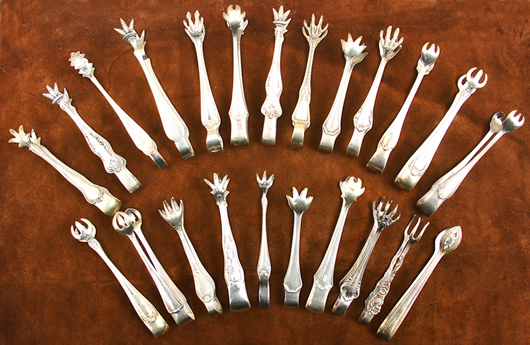 Railroad dining cars of the golden era of train travel rivaled the nicest restaurants in terms of service and table arrangement. This selection includes silver sugar tongs from a number of railroads and routes. A&S image. 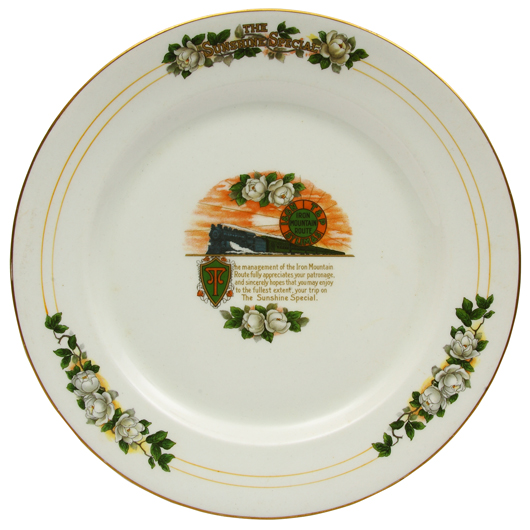 The late Roy Gay prized this beautiful plate from the Great Northern Railroad’s Sunshine Special above all other china in his vast collection. A&S image. 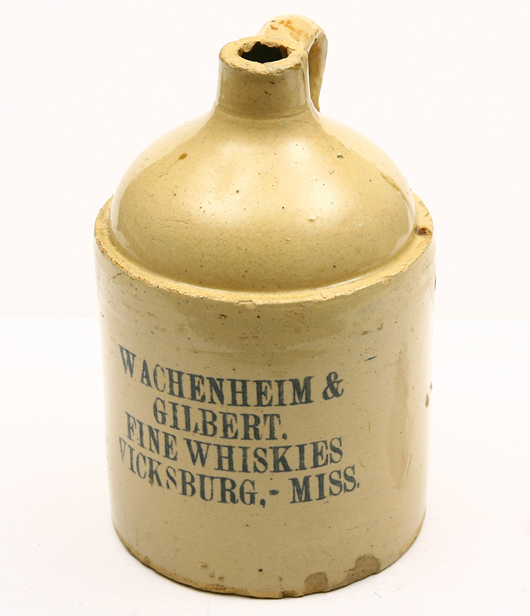 This Wachenheim & Gilbert Fine Whiskies crock is one of approximately 100 stoneware crocks in the Roy Gay collection. Most are marked for railroad lines, brands of whiskey or other alcoholic beverages; or saloons. A&S image. 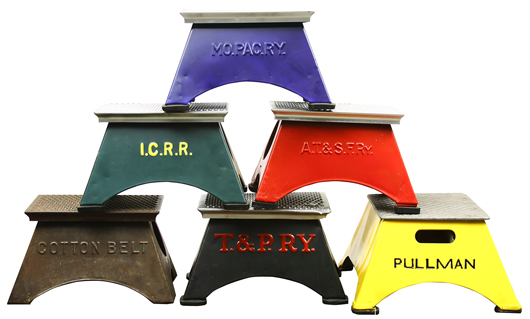 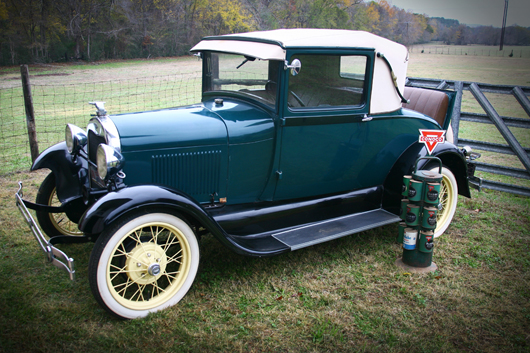 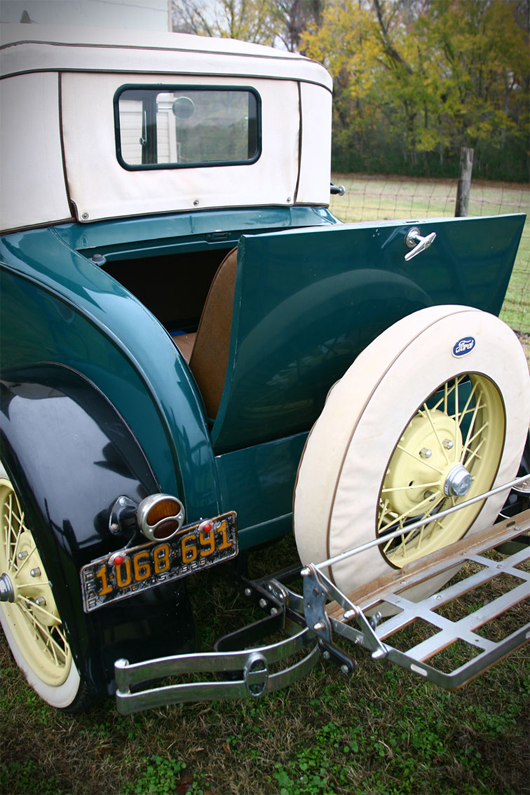 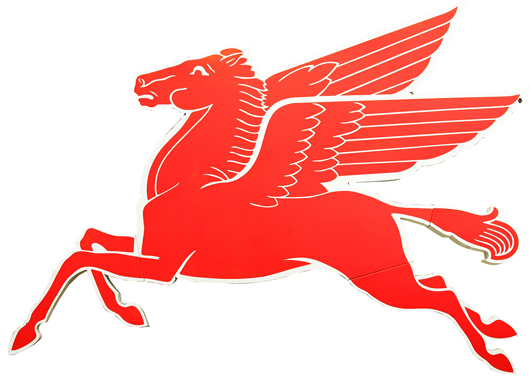