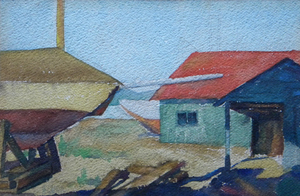 PROVINCETOWN, Mass. – Outer Cape Auctions will host its second art auction of the year on Feb. 14 with a sweet Milton Avery self-portrait ink on paper, a stunning early Henry Gasser watercolor and a Wolf Kahn etching among the 190 works of art being offered. LiveAuctioneers will provide Internet live bidding.

The auction will again be conducted at the new Seashore Point Community, 100 Alden St. in Provincetown beginning at 4 p.m. Eastern. Previews will be held daily in the run-up to the auction.

The auction will start off with an early watercolor by Henry Gasser (1909-1981). The untitled work views a boat shed, a tarp-covered dory and the sea in the background. “This painting’s lines are straight and clean and the palette used, sensational,” said Terry Catalano, owner and auctioneer. The work measures 12 1/4 inches by 18 3/4 inches and is signed on the lower left, “H. Gasser.” The estimate is $1,000-$2,000 with an opening bid of $100.

“I love when I receive consignments without reserves because it gives me the opportunity to offer a fabulous work at a ridiculously low price, knowing full well that it will attract many bidders and hopefully, send the hammer price above the estimates,” said Catalano.

Milton Avery (1885-1965) is represented by a self-portrait ink on paper dated 1959. It had been appraised in September 1999 as being authentic and the authentication report is included with the work. A barely noticeable stain on the paper is the only visual defect, and the work is estimated to sell at $3,500-$4,500. An etching of a European bridge overpass by Wolf Kahn (born 1927) dated ’82 and hand-numbered 90 of 90 is also one of the sleepers of the auction with an estimate of $200-$400.

“Such strong and recognizable names are sure to garner a lot of interest,” said Catalano.

Other works by late artists being offered include three oils by Arthur Vidal Diehl (1870-1929), a beautiful dunescape dated 1946 by Raymond J. Eastwood (1898-1987) and a beautiful watercolor of a white picket fenced Cape Cod home by James Kirk Merrick (1905-1985). William F. Boogar Jr. (1893-1958) was a well-known Provincetown bronze sculpture artist and there are two works in the auction, a seagull and a lamp with original shade, top and the base designed as a dove taking flight. Robert Beauchamp (1923-1995), a Truro, Mass., artist is represented by a large oil measuring 50 inches by 40 inches and signed on verso. There are four works by Ada Rayner (1901-1998), the first wife of Henry Hensche; three works by William H. Littlefield (1902-1969) including an early impressionist landscape that was exhibited at the Cape Museum of Fine Art and was featured in the catalog; an oil painting of a pier, red shack and fishing boat and dory, most likely Rockport, by George Elmer Browne (1871-1946); and there is an oil painting of a sailing yacht named Thunderhead by Cleveland Woodward (1900-1986), another Truro, Mass., artist.

On the contemporary front, Canadian Steve Walker, known for his many book covers and homo-erotic content paintings is represented by two original acrylic on canvases, Stay the Night and Jay and Clayton are on the block, along with two beautiful oils by Cape School of Art teacher Lois Griffel. There are works by Jackson Lambert (born 1919), Hilda Neily (born 1947), Michael E. Davis (born 1945), William Maynard (born 1921), John DiMestico (born 1949), Jack Garver (born 1921), Anne MacAdam (born 1930) and many more.

A painting by Paul Sattler, a contemporary Boston artist, titled Providence (Final Variation on Wtewael’s “Wedding of Peleus and Thetis”) that measures 60 x 72 and exhibits the Alpha Gallery, Boston, label and the date of 2003. A stunning work by Fernando DeOliveira titled Nirvana dated 2006 is also being offered along with the hard covered book about him and his art. There are three works by Canadian artist Joann Corno, two oils by Kathy Buist (born 1959) and many more.

There is a full preview online at www.outercapeauctions.com with multiple images, in-depth lot descriptions and artist’s information. 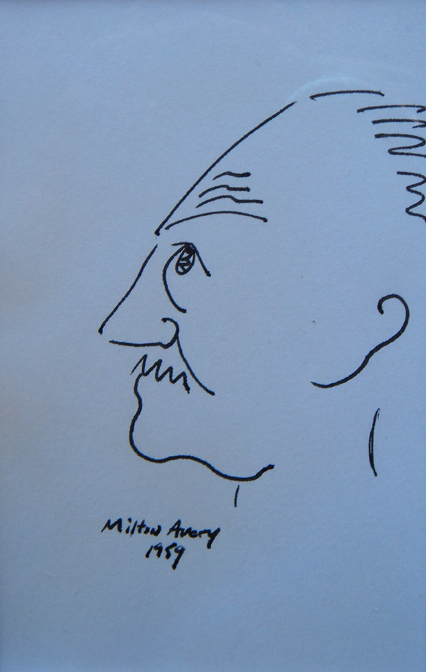 This self-portrait by Milton Avery, one of America’s pioneering colorists, is an original drawing, ink on paper, measuring 5 1/2 by 3 1/2 inches. It has a $3,500-$4,500 estimate. Image courtesy of Outer Cape Auctions. 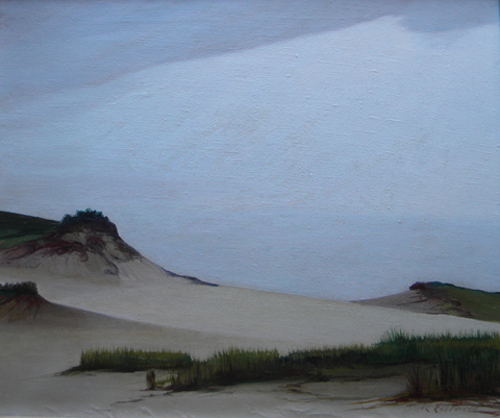 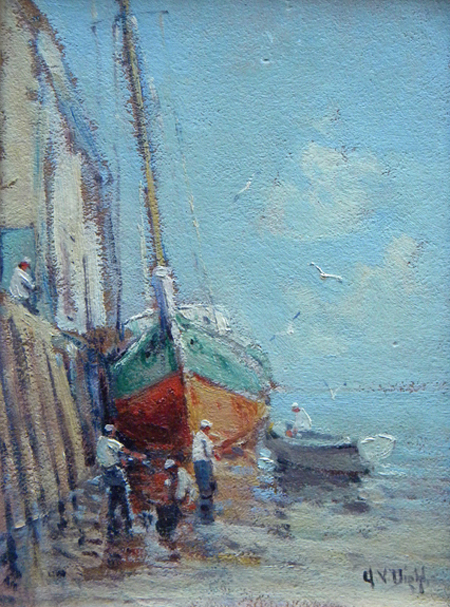 Largely self-taught Provincetown artist Arthur Diehl painted this untitled oil on board, which measures 11 1/2 inches by 8 1/8 inches. It has a $1,000-$2,000 estimate. Image courtesy of Outer Cape Auctions. 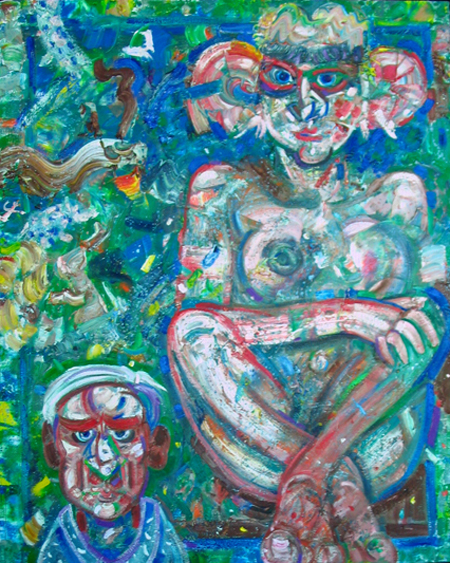 Robert Beauchamp, a figurative painter known for a colorful, expressionistic style, was active in Provincetown since the 1950s. This untitled oil on canvas, 50 by 40 inches, is dated ‘5/94,’ 10 months before he died. It has a $5,000-$10,000 estimate. Image courtesy of Outer Cape Auctions.

Provincetown course designed to give direction to artists