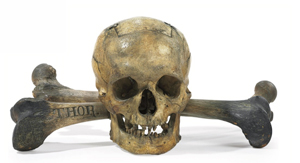 NEW YORK (AP) – A human skull that apparently was turned into a ballot box for Yale’s mysterious Skull and Bones society is going on the auction block.

Christie’s estimates the skull will sell for $10,000 to $20,000 when it is auctioned on Jan. 22. Fittingly, the auction house has agreed to keep the seller’s name a secret. On Monday, it described the person only as a European art collector.

The skull is fitted with a hinged flap, and is believed to have been used during voting at the famous society’s meetings. The auction house said it also may have been displayed at the society’s tomblike headquarters on Yale’s campus in New Haven, Conn., during the late 1800s.

Skull and Bones, an elite society founded in 1832, has closely guarded its members’ names and its activities since the early 1970s. Prior to that time, the group published an annual roster.

“I think it’s a macabre artifact,” Margot Rosenberg, head of Christie’s American decorative arts department, said Tuesday. “It’s an intriguing story tied to America, tied to Yale. I think it will generate interest for people who are former Bonesmen, people who collect Americana, people who are interested in history.”

The skull is believed to have been owned by Edward T. Owen, who graduated Yale in 1872 and went to become professor of French and linguistics at the University of Wisconsin. The word “THOR” is etched into the skull; it may have been the nickname given to Owen or another society member.

The skull is being sold with a black book, inscribed with Owen’s name, the year 1872 and the numeral 322, a reference to the society’s year of inception and to the death of the orator Demosthenes in 322 B.C. It contains the names and photographs of about 50 Bonesmen, including Taft, who became the 27th president of the United States; Morrison Remick Waite, who became U.S. chief justice in 1874; and William Maxwell Evarts, who served as U.S. secretary of state and U.S. attorney general.

Skull and Bones invites 15 Yale seniors to join each year. Bonesmen swear an oath of secrecy about the group and its strange rituals, which include initiation rites such as confessing sexual secrets and kissing a skull.

On Tuesday, the society’s secrecy remained intact. Efforts to reach a society member or a representative of its business arm, the Russell Trust Association, through a Yale spokesman were unsuccessful. The Ivy League school, which is not affiliated with the society, did not return a reporter’s call. 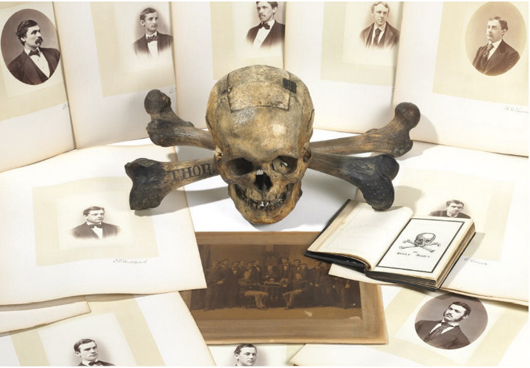