NEW YORK – A piece of the set from The Ed Sullivan Show, signed by the Beatles minutes before their first live television performance Feb. 9, 1964, may sell for more than $800,000 in Heritage Auction’s April 26-27 Entertainment & Music Memorabilia Signature® Auction. The sale headlines an all-star list of memorabilia from the world’s finest performers and musicians, ranging from Elvis to Jimi Hendrix.

Minutes before the Beatles’ history-making debut on The Ed Sullivan Show, a stage hand asked the quartet to sign the back of the fiberglass wall just as the lads were about to be seen by 73 million television viewers. Adorned with individual drawings from each member of the band and accompanied by big, bold signatures, the section may bring more than $800,000.

“No other signed piece of Beatles memorabilia is this historic and as well documented as the autographed wall from The Ed Sullivan Theater,” said Garry Shrum, consignment director of music memorabilia at Heritage Auctions. “It is the living definition of museum-quality.”

The wall leads a group of nearly 180 individual lots of memorabilia devoted to the Fab Four, including a rare, 8 x 10 glossy photo of the group taken during the Ed Sullivan debut, signed by all four as well as manager Brian Epstein and Sullivan himself, (estimate: $125,000-plus).

Other highly anticipated Beatles memorabilia include:

· A selection of rare and autographed albums ranges from a stereo LP of Meet the Beatles!, autographed by all four members a day before their second appearance on The Ed Sullivan Show, (estimate $30,000-plus).

· The fourth copy of The Beatles The White Album, numbered A0000004, originally sent to George Harrison at Apple’s Savile Row headquarters in London, (estimate: $10,000-plus).

The auction is rounded out by many more eagerly sought after pieces, including 84 offerings of Elvis Presley related memorabilia that spans The King’s career on stage, behind the mike, and on the silver screen. This collection features the iconic Lansky’s suit he wore during a premier at the Frontier Hotel in 1956. This is the one-button coat and pants Presley wears in his Topps series card set, and the ensemble is expected to sell for $20,000-plus. A later, but no less impressive, full-length red coat with fur trim and cape, (estimate: $10,000-plus), embodies the star’s larger-than-life persona.

Early Presley recordings and related ephemera are rare and this auction offers two only known examples to exist. The first is Milkcow Blues Boogie, a mis-pressed Sun single (Sun 215, 1955), (estimate $2,400-plus), and a promotional mailing envelope for his 1956 tearjerker Old Shep, (estimate: $4,000-plus). The song was the first Presley sang in public and when he recorded it for RCA, copies of the 45 single were sent to radio stations tucked safely inside a special envelope featuring art from the incomparable comic artist Will Eisner, best known for his work on The Spirit.

A museum’s-worth of star-owned and played instruments spanning the entire 20th century is led by a clarinet owned and played by Big Band leader Benny Goodman, “The King of Swing,” (estimate: $7,000-plus), accompanied by an extraordinary amount of personal ephemera and photos. The “Li’l Red” Gibson Electric Guitar used by ZZ Top guitarist Billy Gibbons, circa 1961, (estimate: $60,000-plus) and the Gibson acoustic guitar owned and played by rock ’n’ roll star J.P. Richardson aka The Big Bopper, (estimate: $3,000-plus) pulled from the airplane wreckage that took his life as well as those of Buddy Holly and Richie Valens, are both expected to inspire aggressive bidding.

The auction also offers spectacular clothing once worn by Jimi Hendrix. Two quintessential examples of “hippie fashion” include a long, multicolored, velvet vest, covered front and back with an orange, black, and white thread paisley motif, (estimate: $20,000-plus), and a short, maroon velvet vest adorned with elaborate Eastern-style brocade, (estimate: $15,000-plus).

The only known Woodstock festival prototype poster from 1969, (estimate: $5,000-plus) the first promoting America’s musical turning point at its location in White Lake, N.Y., is one of the nearly 100 rock and concert posters in the auction. The selection includes a rare Joan Baez and Bob Dylan stock poster from 1965, (estimate: $2,000-plus), and a desirable, round Kaleidoscope Club poster for the Doors, from 1967, (estimate: $1,500-plus).

Among the rarest items in the auction is a 1967 Northern Soul promo 45 single for Try Me For Your New Love by Junior McCants, (estimate: $5,000). Until Heritage experts cataloged this example, it was believed only one surviving copy existed of a genre of American recordings that did not become popular until “discovered” by dance clubs in Northern England. 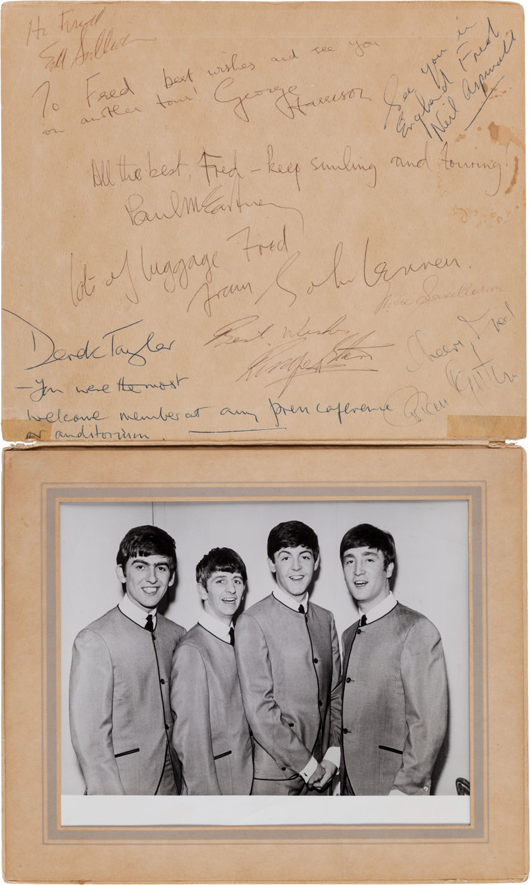 The Beatles, Ed Sullivan and Brian Epstein signatures from their first appearance on the Ed Sullivan Show, Feb. 9, 1964, an 8 x 10 glossy of the Fab Four in a foldover photo album. Estimate: more than $125,000. Heritage Auctions image. 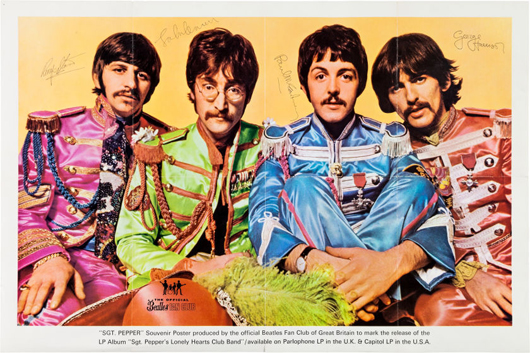 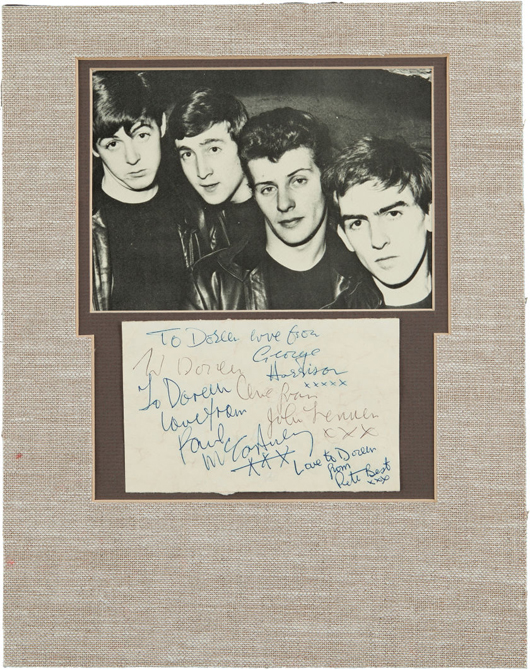 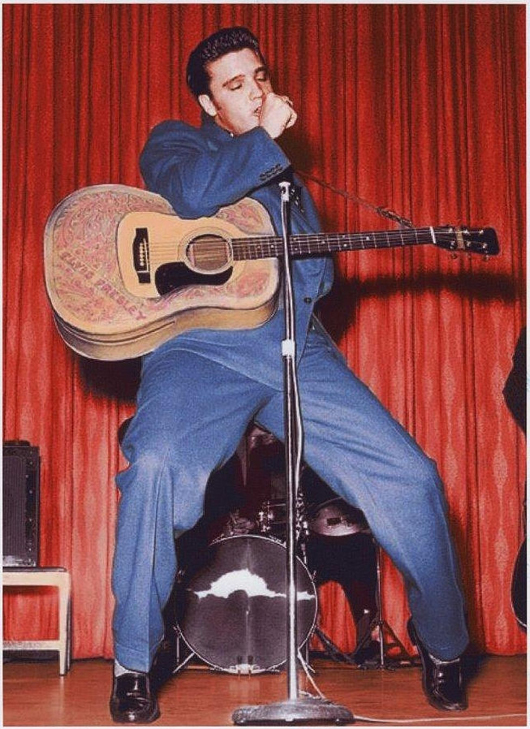