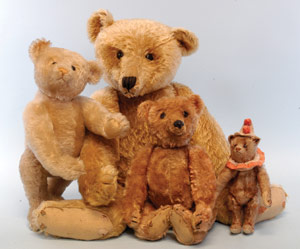 A large assortment of Steiff bears will be ready for their close-ups at Bertoia’s Nov. 7-9 auction, including a coveted and very rare “rod” bear (front and center) that was X-rayed to confirm that it contained the early Steiff rod mechanism. Image courtesy Bertoia Auctions.

VINELAND, N.J. – Nearly 2,500 lots of American, European and Japanese toys, and a special selection of folk art and antique advertising, will take the spotlight Nov. 7-9 at Bertoia Auctions’ gallery. Several prestigious collections anchor the sale. Automotive collectors will be treated to more of the late Bob Smith’s friction and pressed-steel toys, while holiday enthusiasts will be invited to take a third helping from the mind-boggling Fred Cannon collection and choose favorites from the revered Mary Lou Holt collection. In addition, Bertoia’s will present still banks from the collection of the late Dick Sheppard, European toys from the late Steve Olin and his wife Diane, and a remarkable Midwest private collection of horse-drawn cast-iron toys of every imaginable discipline.

Friday’s session opens with still banks from the late Dick Sheppard, who favored fine painted examples, especially buildings with cupolas. Among the top pieces are a very rare Boston State House, House with Bay Windows, and both slotted-roof and painted versions of the rare Old South Church.

The mechanical bank section features many pristine examples, including Elephant and Three Clowns, Paddy and the Pig, a beautiful Presto bank, Chief Big Moon, Globe, one of the nicer Trick Dog banks, and a fine Coin-Registering bank that Bertoia’s owner Jeanne Bertoia predicts will be a “high-ticket item.”

A premier collection of horse-drawn cast-iron toys highlights Friday session. Bertoia’s associate Rich Bertoia remarked: “These toys will continue to gain popularity after the new book on the subject comes out,” he said. The many categories in the collection include work wagons, plantation wagons, leisure wagons and fire wagons. Three of the top pieces are a beautiful Oxford trap, a 4-seat Hubley brake, and a Pratt & Letchworth ladder wagon with original box.

Closing out Friday’s session are figural cast-iron doorstops. Little Red Riding Hood with the Wolf, a very desirable Sailor, Guitar Player and Tropical Woman with Fruit Basket are among the top lots. The latter three doorstops were probably all manufactured by Littco of Littlestown, Pa. “They may be the best examples of those three designs ever to come to auction,” said Jeanne Bertoia, a renowned authority on cast-iron doorstops. She also noted that the sale includes an outstanding example of the flashy Wine Merchant doorstop. Jeanne’s pick among the building-style doorstops is the self-descriptive example embossed on its base with the words Highland Lighthouse Cape Cod.

Four complete, boxed Heyde sets in excellent condition will be sold, as will a comprehensive grouping of trains and accessories by Marklin, Carette and Bing; and a gathering of antique vintage games and magic sets. Within the latter category are German, American and French boxed games, some of them sports themed. Collectors will immediately recognize the desirability of the Stanley in Africa game, the French-made Fishing Pond with lead figures, and the large Hide and Seek game. Approximately half of the games have a black Americana focus, like The Bogie Man and Cakewalk. “There should be great crossover interest in those games in particular,” said Jeanne Bertoia. Saturday’s session also includes celluloid and comic character toys.

Sunday leads off with Schoenhuts, led by an exquisite boxed Teddy Roosevelt Adventures in Africa set. Rare in any condition, this particular set includes lithographed cardboard scenery, an optional purchase at the time of the toy’s original retail release. “When the set first came in and I opened the box, I simply could not believe the condition,” said Rich Bertoia. “It was just extraordinary, with immaculate paint. It’s as though it had been packed away in its original box with instructions saying ‘Do Not Open Till 2008 at Bertoia’s.'”

Approximately one dozen automata will follow, with the headliner being an 18-inch-tall Vichy rabbit, covered in rabbit fur and with a cabbage concealing a monkey inside. The session continues with German shops, rooms and dollhouses, including a including a huge Victorian dollhouse with kitchen wing from the late Flora Gill Jacobs’ collection.

Dolls in the sale include French fashions, many 24-inch (and larger) bisque-head dolls, china-head dolls, and teddy bears, including a few scarce early Steiffs. Out of consideration to bidders, Bertoia’s X-rayed the especially rare “rod” bear and confirmed that it contains interior rods that function as “joints.” The presence of these desirable rods validates that the long-limbed circa-1903 bear has a special pedigree and is, in fact, one of the rarest of all Steiff productions.

The auction concludes with a spectacular Christmas display comprised of part III of the Fred Cannon collection and a dazzling array of Christmas antiques from the Mary Lou Holt collection. The sale features nearly 100 Dresden ornaments, vintage stuffed Christmas stockings, nearly 100 glass ornaments, incredible Santa-on-reindeer displays and candy containers, a large Father Christmas chalkware figure, and a very large electrified reindeer with seated Santa. An exceptional piece in this category is a 30-inch Father Christmas display figure of artistically molded composition, which may have come straight from Germany to Pennsylvania, where it remained for many years.

All forms of bidding will be available for this sale, including live via the Internet. Click here to view the fully illustrated auction catalog and sign up to bid absentee or live online as the sale is taking place. 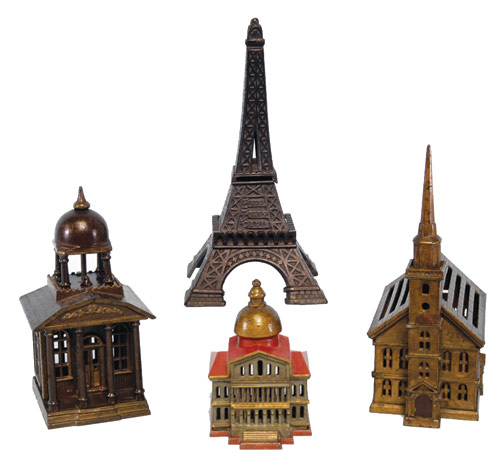 Several hundred still banks will be offered in the Nov. 7-9 auction at Bertoia’s. Among them are a Boston State House bank, Eiffel Tower, rare Old South Church with slotted roof, and a Building with Belfry bank. Image courtesy Bertoia Auctions. 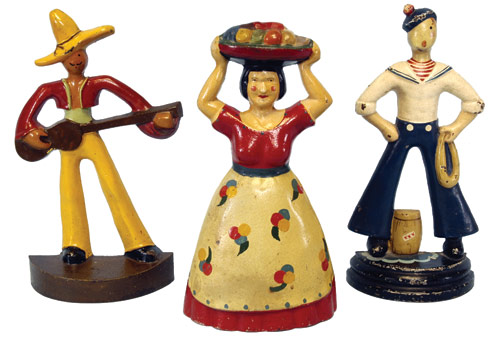 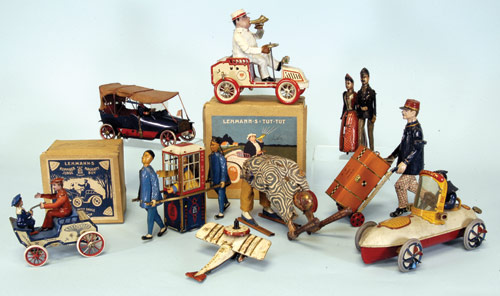 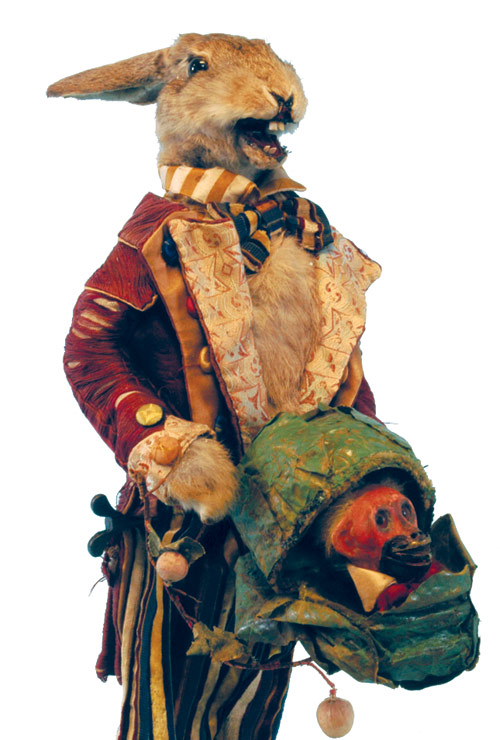 From the French make Vichy, this wonderful musical clockwork rabbit with cabbage automaton is covered in rabbit fur and has glass eyes. When activated, a monkey emerges from the cabbage. Image courtesy Bertoia Auctions. 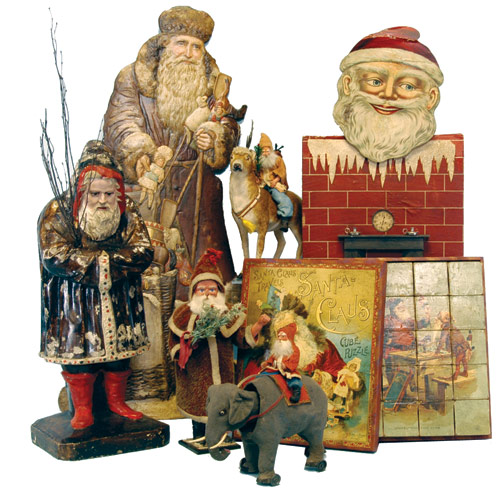 Collectors of Christmas antiques will be able to pick their favorites from an array of hundreds of glass ornaments, Dresdens, Santas and other delights from the Fred Cannon and Mary Lou Holt collections. Image courtesy Bertoia Auctions. 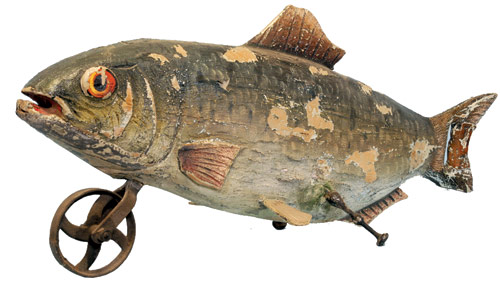 This highly unusual 5-foot figural fish was once used as a trade sign in front of a fishmonger’s shop. It has a front guiding wheel, cast-iron supports and a tail that functions as a handle. Image courtesy Bertoia Auctions.

Harvard museum gets gift of $45M, 3 Picassos, other valuable art
Scroll to top