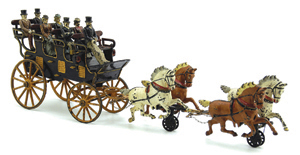 VINELAND, N.J. – The Bertoia family has taken great pleasure in welcoming a global community of bidders to its ongoing series of sales featuring the Donald Kaufman collection, and they’ve kept that international approach in mind during the planning stages of their 2,100-lot Holiday Toy Trimmings sale, scheduled for Nov. 13-15, 2009. Bidding will be possible via the Internet from anywhere in the world through LiveAuctioneers.com.

“We have equally strong selections of American and European toys to offer bidders, as well as some Japanese rarities,” said Bertoia Auctions associate Rich Bertoia. “While we keep the standard high for things we accept from consignors, not everything in the sale is necessarily a high-dollar item. We like to go after things that are interesting, and this sale is loaded with interesting things.”

The opening day’s session could easily qualify for the title of “Cast-iron Friday.” In the horse-drawn cast iron, there will be autos, busses, motorcycles, farm toys and fire toys. The category also includes a Carpenter Tally-Ho and engine house, and a private collector’s early Pratt & Letchworth 4-seat brake and hose reel/ladder wagon in pristine condition.

Moving into the motorized cast iron, specialty pieces include a Kilgore TAT airplane and a Hubley Sea Horse boat. A gem of a construction vehicle, a Hubley bright red and green Truk Cement Mixer, “walked through the door on its own,” Rich said.

Part two of the Dick Sheppard still bank collection features many rare, hand-painted buildings, such as a slanted-roof variation of the Old South Church bank. Cast-iron mechanical banks include a Darktown Battery, Coin Registering, Jonah and the Whale, and a 6-part Trick Dog bank.

Figural cast-iron doorstops are a hallmark of any Bertoia sale because of company owner Jeanne Bertoia’s expertise in the category. The 100+ cast-iron figural doorstops offered include a pristine Giraffe, Taylor & Cook designs, a Little Red Riding Hood, Girl Kicking Flowers, Bradley & Hubbard Huck Finn, and a Popeye in near-mint condition.

Next up will be a band of Ives drummers and other toys, including a Double Dancer, Revolving Mule Dancer with Clowns, and a series of dancing characters on wood bases: Punch and Judy, Irish dancers, jiggers and The Giant. Other American toys include paper litho over wood stables, small butcher shops and other buildings; and 200+ boxed games apportioned into 30 lots.

Saturday’s session opens with German zeppelins, airplanes, very early monoplanes, a “pusher” seaplane, and a fleet of hot air balloons – one with a parachutist and one with a daredevil figure. The Continental group continues with a charming Vielmetter Clown Artist, a little boy calculating on a chalkboard, a few Gunthermanns, and a boxed 1900 French moving sidewalk with people standing around it.

Those seeking European autos will not be disappointed with highlights such as the largest-size Gunthermann Gordon Bennet racer, a boxed 20-inch Gunthermann Bluebird racer and beautiful foot-long Bing four-seat tourer in a striking orange color.

Automotive stars from Japan include an Ashi 1962 Chrysler Imperial in black, which is joined by an Ichiko red and white Lincoln 4-door hardtop with box and a 1954 Chevy 2-door made by Marusan for Linemar.

The Saturday session will take to the water with a diverse fleet of boats, tin ships, battleships, cabin cruisers and destroyers. The extremely rare Rock & Graner Furst Bismarck to be auctioned is the actual example in Richard Claus’ book The Allure of Toy Ships. Among the other rarities are a circa-1870s Buckman (American) paddle wheeler and a boxed Ives steam launch in pristine to near-mint condition. The latter toy is accompanied by its original box, which identifies it as “The Neptune.”

The rest of the day presents buying opportunities in many categories: premium buttons, advertising signs, Schoenhuts, a wonderful selection of skittles, composition-on-wood platform animal toys, dolls and teddies, and a nice grouping of clockwork-driven platform toys, including a Descamps boxed rabbit in cabbage, Roullet et Descamps’ mechanical kitten in teapot, and Vichy’s Le Picador, which has a box marked “Exposition Universelle, Paris, 1878.”

Sunday’s session is devoted entirely to Christmas antiques and will include hundreds of glass and cotton ornaments, and the largest group of Dresdens ever offered by Bertoia’s. A series of coveted belsnickels is led by a magnificent 20-inch-tall Pennsylvania German bearded belsnickel, all original and with numerous trinkets resembling Christmas cracker toys affixed to its beautiful period outfit. On its foot is an original label with the name and address of a Philadelphia toy company – Partridge & Richardson, North 8th Street – which burned down in 1905.

For questions about any item in the sale, call Bertoia’s at 856-692-1881 or e-mail toys@bertoiaauctions.com. To view the fully illustrated catalog and sign up to bid absentee or live via the Internet, log on to www.LiveAuctioneers.com. 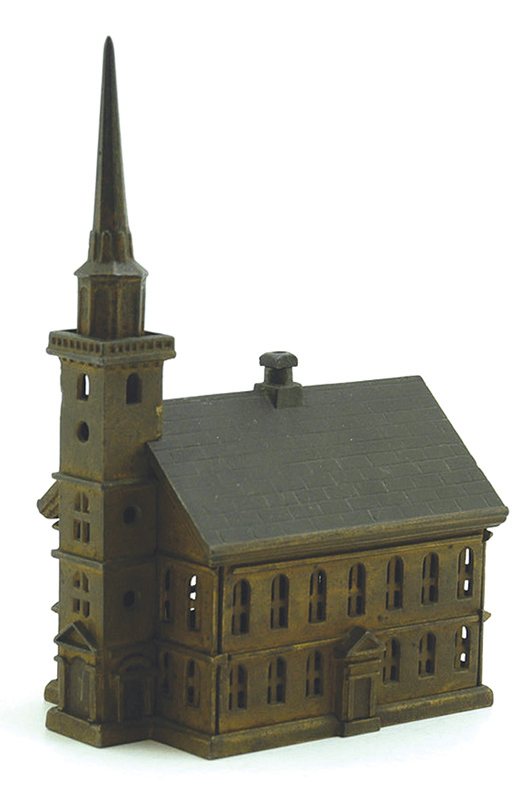 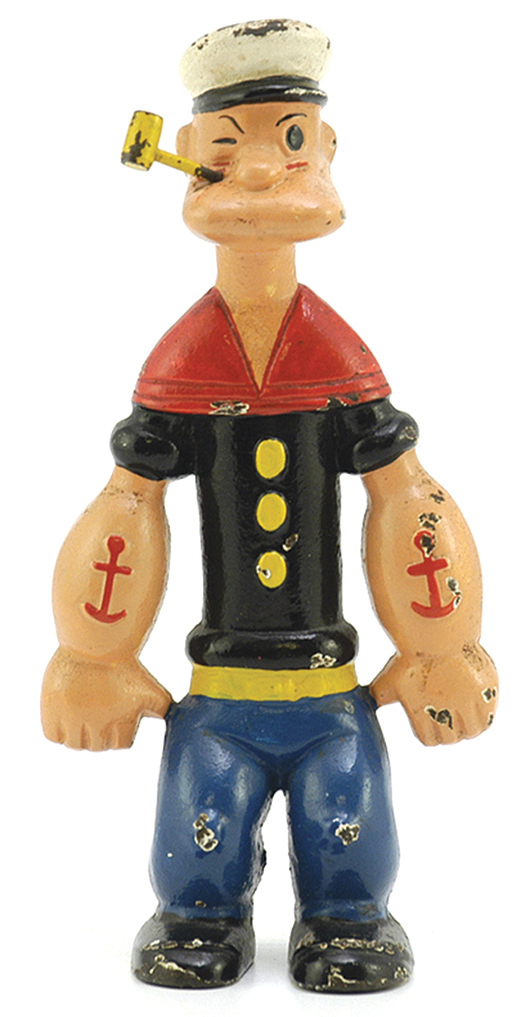 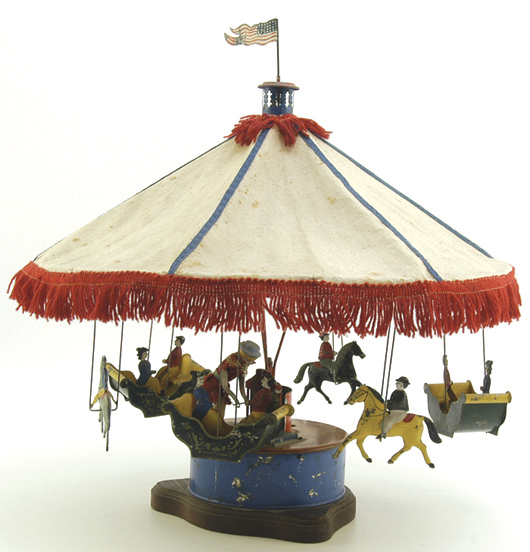 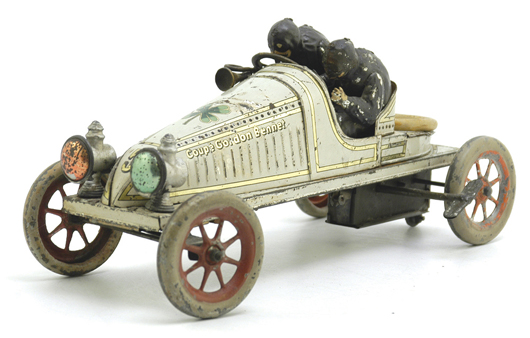 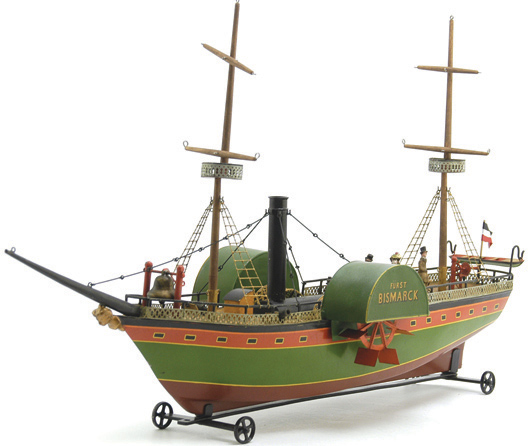 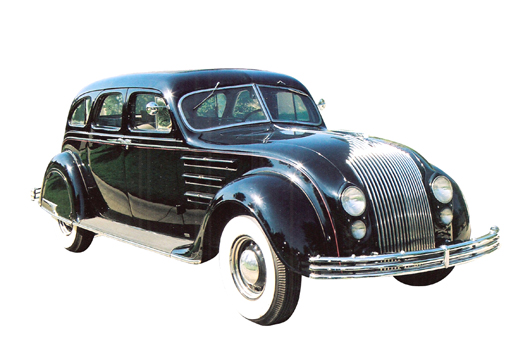 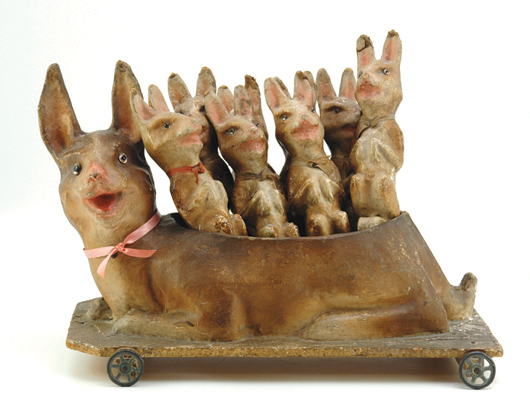 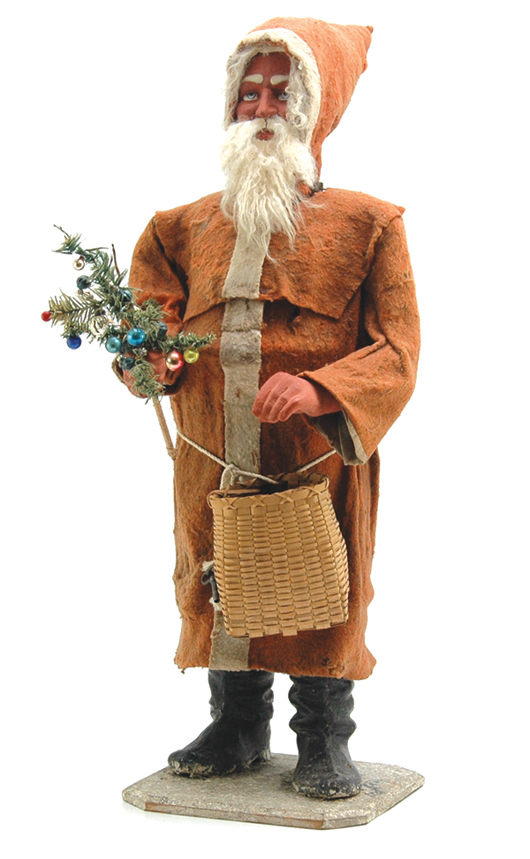