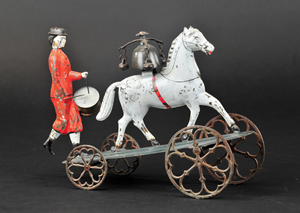 VINELAND, N.J. – At this point in the evolution of antique toy and bank collecting, it could be argued that there are two basic groups of collectors: those who have had the privilege of viewing the Max N. Berry collection, and those who will see it for the first time on November 14-15, 2014 at Bertoia’s. Over those two days in mid-November, the family-owned New Jersey company will auction a total of 479 lots of early toys and mechanical banks from the distinguished Berry collection, with nearly 100 lots planned for the Friday evening session, and the balance to follow on the Saturday. Internet live bidding will be available through LiveAuctioneers.

“I don’t know where you would go to top the Max Berry collection for ‘wow factor.’ Max has been astonishing his fellow collectors for decades, with one impossibly rare toy after another,” said Bertoia Auctions associate Rich Bertoia. “Max set his sights on buying primarily from pedigreed collections whose name value gave the toys and banks automatic provenance.”

Of the nearly 200 mechanical banks to be offered in Bertoia’s November sale, many are so rare, they fall under the heading of “less than a handful known.”

A prime example would be Berry’s 1880s “Darky Fisherman” mechanical bank, designed by Charles A. Bailey of Cobalt, Connecticut. Formerly in the Steven and Marilyn Steckbeck collection, it is one of only two known examples designed with an original fish dangling at the end of the fisherman’s line. Bertoia’s estimate is $225,000-$250,000.

Another extraordinarily rare bank in the Berry collection is a J. & E. Stevens Preacher at the Pulpit. Patented in 1876 and one of three known, it comes to auction with a long and storied line of provenance that goes back to pioneer collector Dr. Arthur E. Corby. Estimate: $150,000-$175,000.

A horse-theme “Trotter” mechanical bank purported to be the only surviving example was made around 1890 by an unknown manufacturer. When a coin is dropped into the saddle, the horse’s front leg paws the ground. “There is a mold for a still bank that has a similar appearance, but being non-mechanical, it does not have a moving leg,” Bertoia noted. The Horse bank is entered with an $18,000-$25,000 estimate.

At the top tier of mechanical banks in the Max Berry collection are two original models, both made of lead, formerly in the Hegarty collection. One is a Wishbone bank in which two figures “pull” on a wishbone that comes apart; the other is a circa-1881 Charles A. Bailey-designed Old Aunt Dinah and the Fairy. Both of these patterns will be auctioned with an $80,000-$100,000 estimate.

Collectors of tin banks will find many exciting rarities in the Berry collection, as well. The only known example of a Weeden clockwork Chinese Ball Tosser, with its original box, is expected to make $70,000-$90,000. Also featured are two Saalheimer & Strauss Mickey Mouse money boxes in very fine condition, est. $15,000-$30,000 each; and an extremely rare, German-made Automatic Savings Bank depicting a circus strongman punching a sailor character, est. $10,000+.

“In the beginning, the only reason I purchased toys was because I knew the big bank collectors wouldn’t sell their duplicates, but they would trade them if you had a rare toy to offer to them,” said Berry. “Before long, I was buying and collecting both toys and mechanical banks, and I ended up with a couple of thousand pieces in my collection.”

Berry’s wise bartering strategy resulted in an enviable sub-collection of early American horse-drawn cast-iron toys. Few would argue that the piece de resistance is an exquisite Ives Cutter Sleigh, the only one known that retains its original seated figure. Estimate: $125,000-$150,000. A Hubley Revolving Monkey Cage Wagon, one of possibly three known, could reach $75,000-$100,000. Additionally, many early cast-iron firefighting toys will be offered.

A Who’s Who of bell toys includes many scarce pieces. A circa-1885 Woman Drummer is a quintessential American patriotic toy, depicting a seated woman in an open cart with eagle finial. As though in a parade, the center bell rings as the toy is pulled along. Estimate: $22,000-$25,000. Additionally, the auction offers a three-dimensional brass pattern for a bell toy called “Christmas Morning,” an endearing depiction of children with toys and a cat. It was formerly in the collection of financier Edwin H. Mosler Jr (1919-1982) and reportedly was one of his favorite toys.

Early American tin was another of Max Berry’s favorite categories, and he had his share of great examples from the finest makers, including George Brown, Althof Bergmann, Merriam, and Hall & Stafford. There are platform toys with suffragette figures and a menagerie of animals that includes elephants, goats, and horses with trainers.

Jeanne Bertoia, owner of Bertoia Auctions, said anyone wishing to learn about antique toys will have the perfect opportunity to do so at the preview and auction.

“What makes Max so special as a collector is that his personal satisfaction has never been tied to the idea of amassing a large quantity of toys. His greatest pleasure has always come from sharing his lifetime of knowledge in hopes of inspiring others to collect,” she said. “Having him in the room is like having access to a graduate course in antique toys, with the most fascinating professor imaginable in charge. Our preview and auction are going to be welcoming, hospitable events to honor Max, whom we have no doubt will be the center of attention.”

To contact Bertoia’s about any item in the auction, call 856-692-1881 or email toys@bertoiaauctions.com. 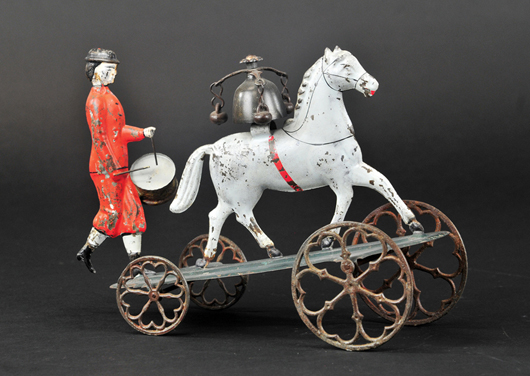 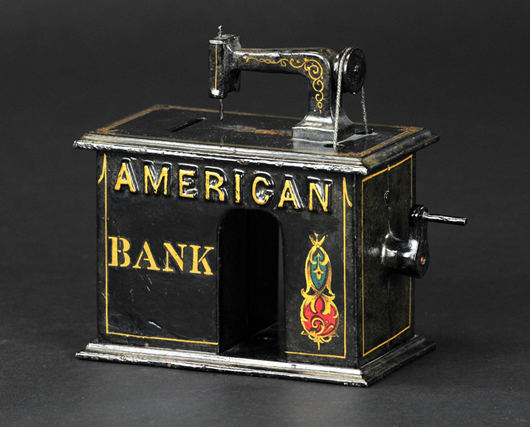 Cast-iron mechanical bank of unknown manufacture and reportedly given away by the American Sewing Machine Co., circa 1880s, est. $12,000-$15,000. Bertoia Auctions image 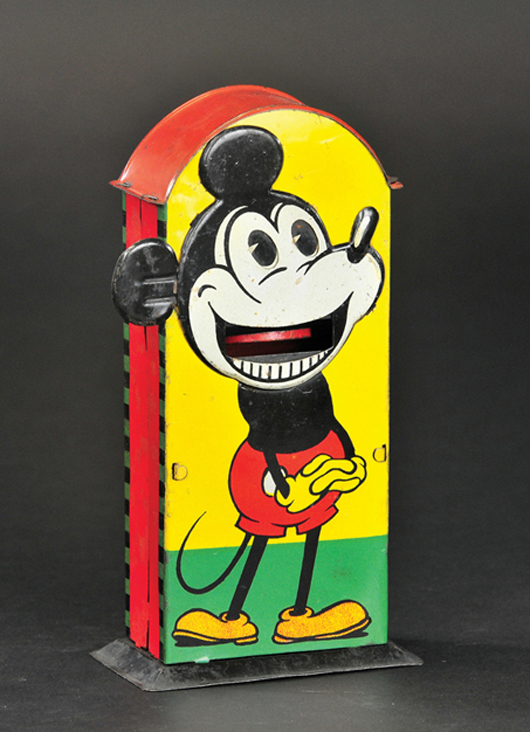 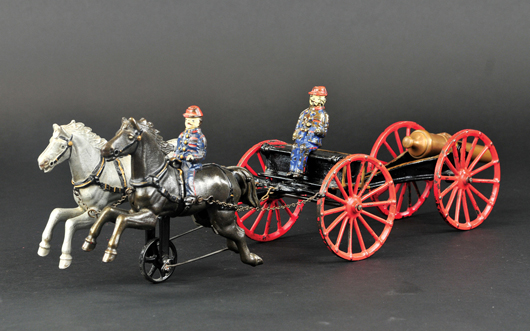 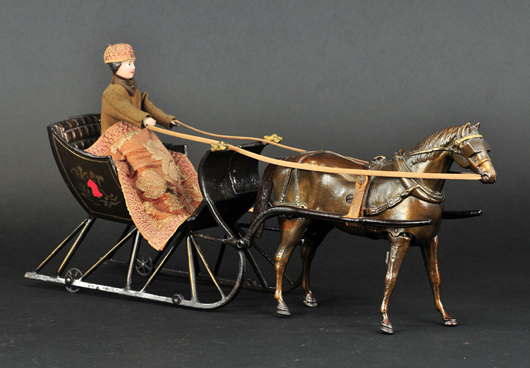 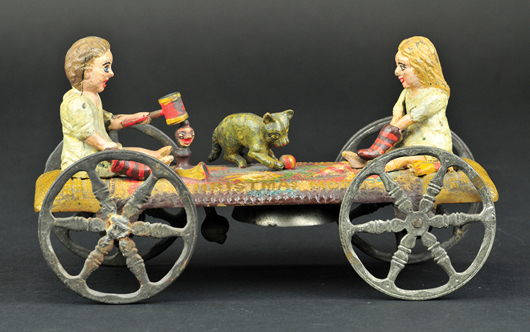 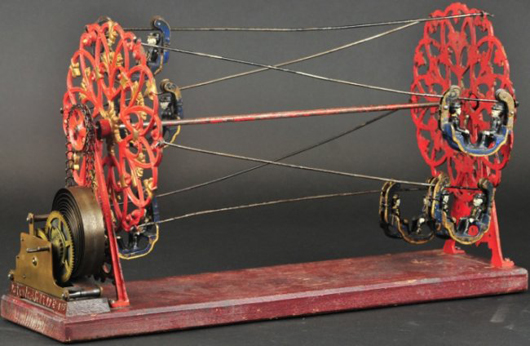 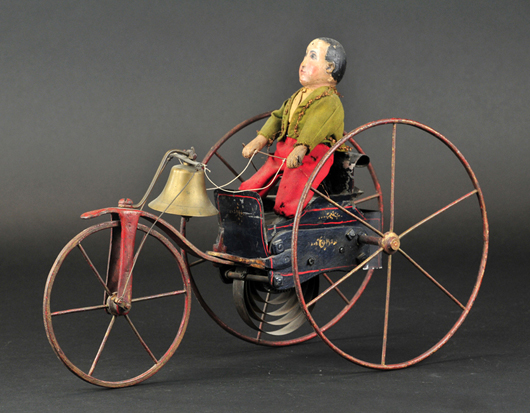 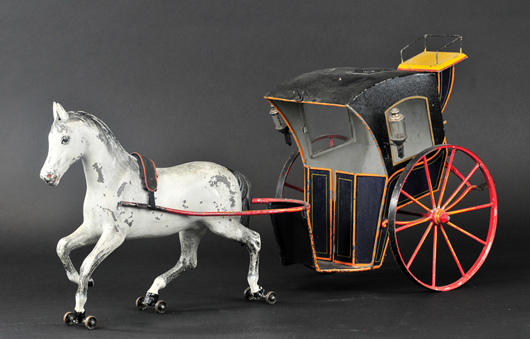 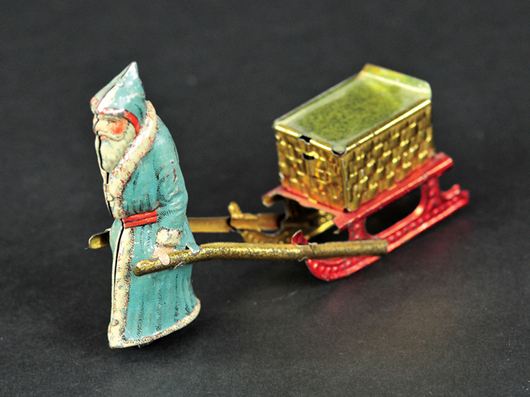 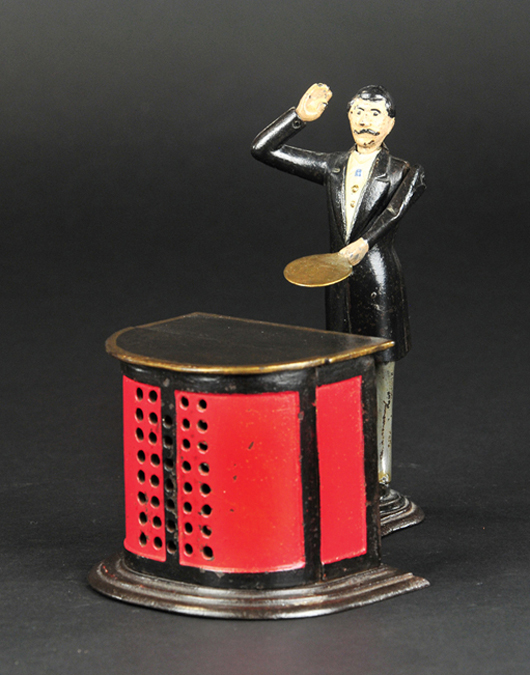