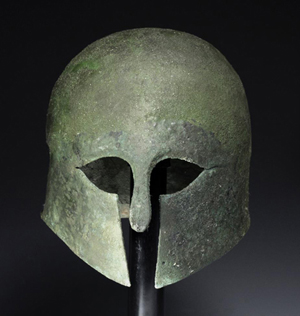 BOULDER COUNTY, Colo. – Two premier collections of art and artifacts from ancient civilizations combine to form the core of Antiquities Saleroom’s June 13-14 auction, which also includes an outstanding selection of natural history and mineral specimens. Many of the 400 lots entered in the absentee, phone and Internet auction come from the meticulously documented, investment-grade collections of two Hollywood insiders – an Emmy Award-winning executive producer/writer, and a producer/director who specializes in movie trailers. Part I of both these collections anchored Antiquities Saleroom’s extremely successful Feb. 1 auction.

Internet live bidding will be provided by LiveAuctioneers.com

“This is our largest auction ever and contains some of the finest classical antiquities we’ve ever had the pleasure of offering,” said Antiquities Saleroom co-owner and acquisitions director Bob Dodge. “Every category contains pieces that collectors dream of owning but never see at auction or anywhere else.”

The session will open with gems and minerals, led by a beautiful pallasite meteorite, 4.5 billion years old, which quite literally is the remnant of an early planet in our solar system. The iron-based meteorite is infused with amber-hued olivine gem crystals and was discovered in Russia in 1967. The consignor is a well-known dealer who has conducted business with Antiquities Saleroom for many years. The specimen is estimated at $1,000-$2,000 – a very affordable price range, Dodge noted. “In all of our sales we make an effort to include nice pieces for every level of collector. In our June auction there are things that will sell for well under a thousand dollars, and for the advanced collector, there are highly important pieces valued in the tens of thousands of dollars.”

The sale will then move into human cultures, with the highlight being a fantastic Egyptian rarity – a pottery seal mold from “The Boy King,” Tutankhamun (1332-1323 B.C). The pottery mold from Tut’s royal workshop is deeply impressed with four elements: ra (sun), kheper (beetle), men (upward rake) and neb (bowl).

These four symbols and their specific arrangement uniquely represent Tutankhamum, Bob Dodge explained. “Pottery molds were used to create scarabs, seals or anything with the pharaoh’s cartouche or name on it. This particular mold probably would have been used to create faience amulets that were passed out as souvenirs to commemorate the reign of a pharaoh, in this case King Tut. In the 25 years I’ve been in this business, this is the first time I’ve seen a genuine King Tut artifact come to auction. It’s from the most important period in terms of Egyptian art, and it’s insanely rare,” Dodge said.

The mold comes directly from the family of the late Philip Mitry, who was an antiquities dealer in Cairo during the 1950s. At that time, the sale of Egyptian antiquities was legal and, in fact, state sponsored. When Mitry moved to the United States in the 1950s, he brought his massive collection with him. The King Tut mold, which became part of Mitry’s collection in 1953, will be auctioned with documentation from Mitry’s family and a lifetime certificate of authenticity from Antiquities Saleroom. The estimate on the piece is $10,000-$20,000, but as Dodge explained, “We think of this as being priceless. It could go far in excess of expectations.”

Another Egyptian rarity is a large scarab impressed with the very clear cartouche of Thutmose III – who, like Tut, was an 18th Dynasty pharaoh. It retains a narrow band of gold on its exterior, and at the bottom is a scene of a monkey in adoration of a horse, symbolizing Thutmose’s much-admired military prowess. A book example, it is expected to make $3,000-$5,000.

The Greek section contains two impressive battle helmets, each exhibiting a different style. One is a Corinthian helmet with a distinctive long nose bridge, sixth to fifth century B.C. “It would have been worn by a Hoplite soldier. They would walk in unison in a group of 20 to 100 men, each carrying a 16-foot-long spear. Then they would hunker down and, at the right moment, attack. In their day they were invincible,” Dodge said. The helmet’s estimate is $30,000-$50,000.

The second helmet is Illyrian and made during the same time period as the Corinthian helmet, but of bronze. It features a squared-off style with interior leather padding. Its estimate is $20,000-$30,000. Another helmet of note is French, of hand-hammered steel with handmade rivets and a retractable visor. Although a much later production that the other two helmets, dating to the 14th-15th century, it is a rarity, as few French or British helmets of that period have survived. Estimate: $10,000-$20,000.

Approximately nine rare and desirable pieces of Greek pottery will be auctioned, including three Athenian (Attic) vessels. One is a slender jar known as a lekythos, which was designed to hold precious oils. Considering how Attic art can run into the millions of dollars, it presents a rare buying opportunity with a presale estimate of $9,000-$14,000. A particularly fine kylix wine cup, fourth-sixth century B.C., features black images on red, against a black ground. Estimate: $20,000-$30,000. The third example is an oinochoe, from which wine was poured at the dinner table. Its estimate is $11,000-$16,000.

The Roman category contains one of the most exciting museum-quality artifacts ever to cross the auction block at Antiquities Saleroom. From the first century B.C., Lot 89 consists of a pair of large, highly detailed bronze fittings that would have adorned either side of a chariot’s hub. The decorative fittings depict the mighty Pericles (Hercules). “The Greeks were superb with pottery,” Dodge said, “but the Romans may have outdone them with bronze work. This pair of fittings is truly gorgeous. It came from a New York City dealer who obtained them from a private collection on the East Coast.” The estimate for the pair is $40,000-$60,000.

The next portion of the sale is devoted to selections from the “Hollywood” pre-Columbian art collections mentioned above, with additional choice consignments. Virtually every pre-Columbian culture is represented, in silver, copper, gold, stone, pottery, textiles and wood. There are 3000 B.C. artworks of the Valdivian (Ecuador) culture and Peruvian artwork and pottery dating from 1200-1500 B.C. A wonderful collection of pre-Columbian gold includes earrings, a crown, and an exceptional three-dimensional bird inside a gold ring, with dangling objects beneath it. Dodge believes it may have been an earring or perhaps a temple ornament. The beautifully detailed bird appears in the book Oro del Antiguo Peru and is estimated at $15,000-$30,000.

Of the Mayan pieces in the sale, Dodge is most enamored of a set of four circa 500 B.C. carved stone monkeys from Mezcala, Mexico. “They’re incredibly well detailed, with very thin tails and openwork. Even modern carvers with sophisticated tools would have difficulty creating pieces like this. To think that carvers with such rudimentary tools did this work is remarkable,” Dodge said. The lot is estimated at $15,000-$25,000.

A prominent politician’s collection of West Mexico pottery is also featured in the sale. The collection includes Colima figural dogs and a rare, 14-inch-long standing duck vessel with a spout in its mouth for pouring fermented beverages. “I’ve seen small ducks and double or triple ducks, but this large duck standing on legs is very unusual. I could see it blowing through its $5,000-$7,000 estimate,” Dodge said. Another important pottery work, a seated shaman is entered with hopes of reaching $6,000-$9,000.

Antiquities Saleroom’s June 13-14 auction will commence at noon Eastern Time on both days. Bids may be placed absentee (including absentee online), by phone or live via the Internet on auction day through www.LiveAuctioneers.com. The entire auction catalog may be viewed online at www.LiveAuctioneers.com. Tel. 720-890-7700 or 720-502-5289. Email antiquitiessaleroom@gmail.com. Web: www.antiquities-saleroom.com. 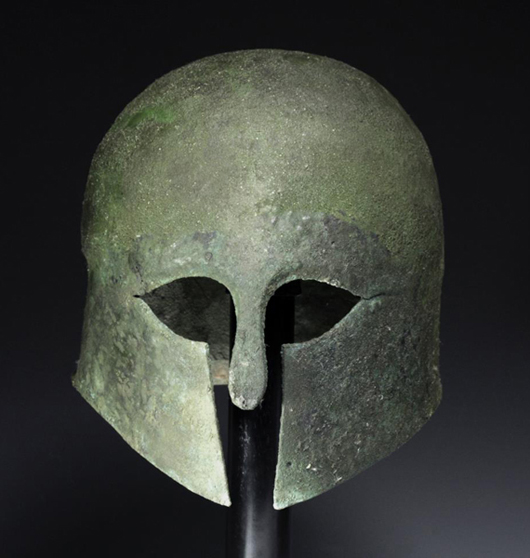 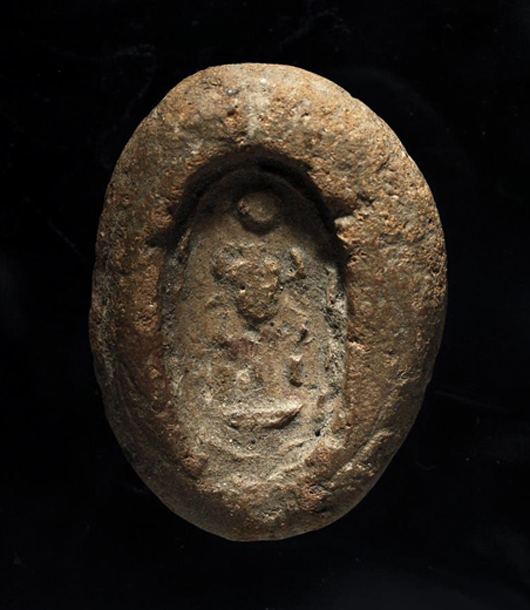 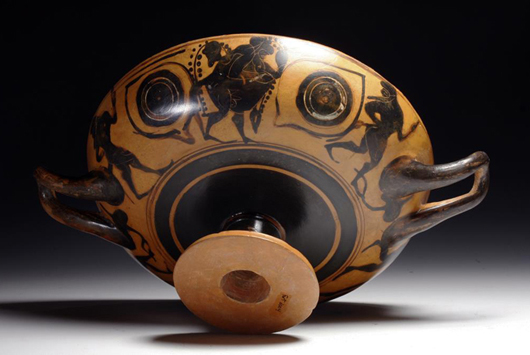 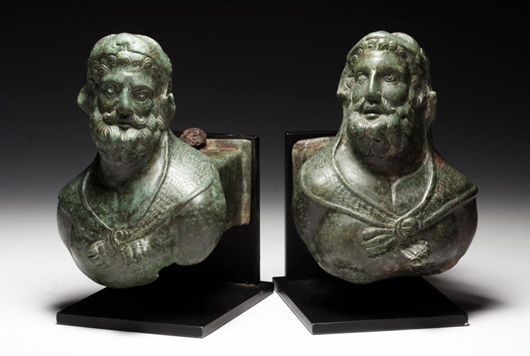 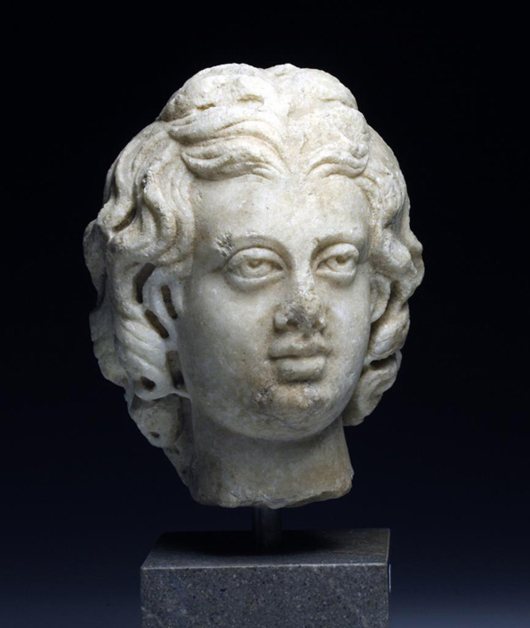 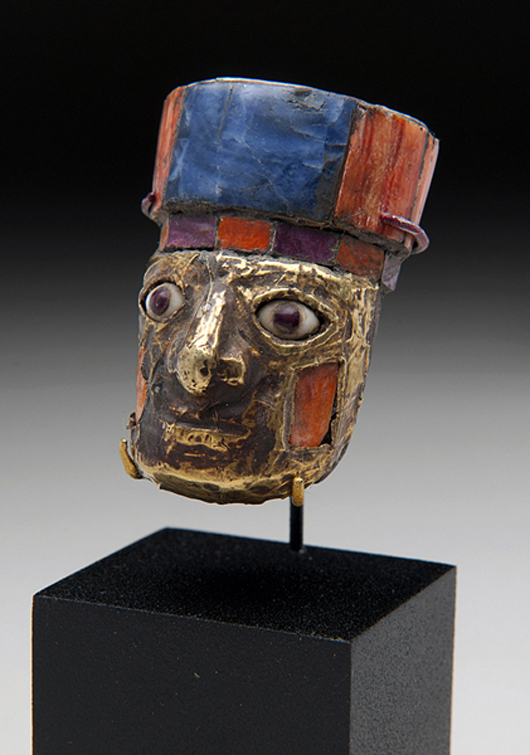 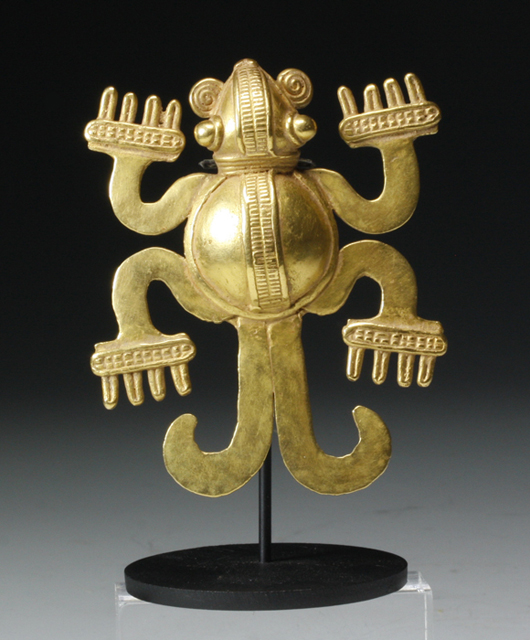 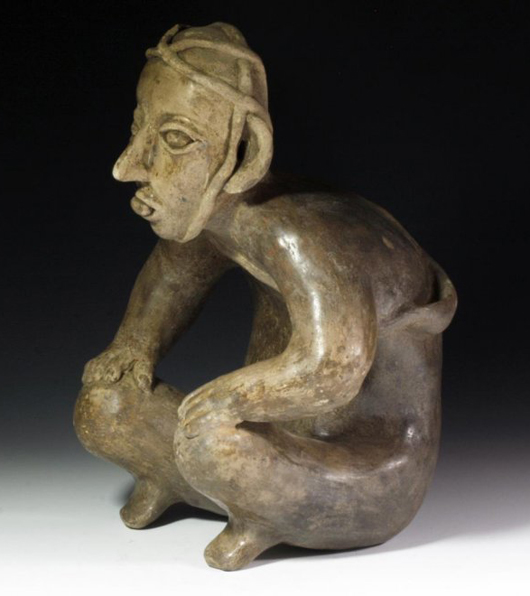 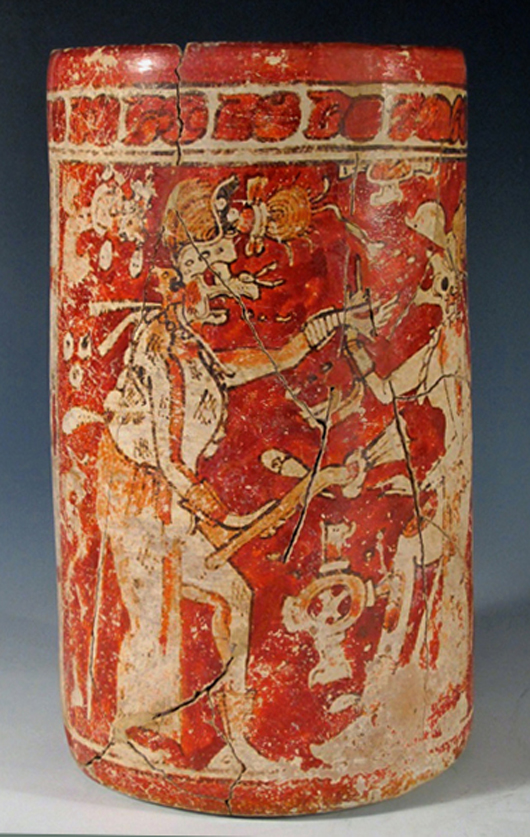