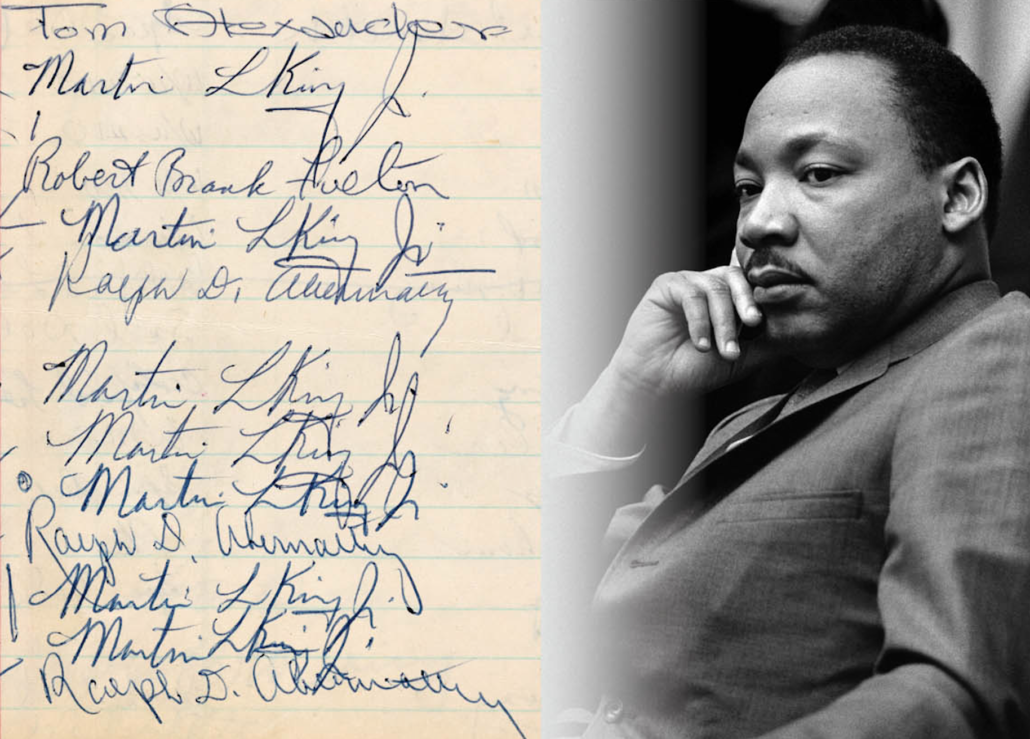 Excerpt from logbook pages [two front and two back sides] bearing 12 signatures of the Rev. Dr. Martin Luther King Jr. (shown at right), and five signatures of his associate and mentor Ralph Abernathy, signed during their 1963 incarceration at the Birmingham (Ala.) Jail. During that incarceration King produced his manifesto on non-violent civil disobedience known as “Letter From A Birmingham Jail.” Provenance: Salvaged by a Birmingham jail employee. Hake’s COA, JSA LOA. Opening bid: $10,000

BIRMINGHAM, Ala. (AP) – Arrested for leading a march against racial segregation in 1963, the Rev. Martin Luther King Jr. spent days in solitary confinement writing his “Letter From Birmingham Jail,” which was smuggled out and stirred the world by explaining why Black people couldn’t keep waiting for fair treatment. Meanwhile, items also were arriving at the jail for King.

A special delivery letter showed up at the jailhouse addressed to King, then a Western Union telegram, and then another and another. A jailer would log each new item in a bound ledger book, which King would then sign. Pages of the old jail log with King’s signature are now going up for auction, with a minimum price of $10,000.

Reportedly saved by an employee at the old jail, which was demolished in 1986, the pages offered by Hake’s Auctions are a previously unknown reminder of King’s time in Birmingham, which the civil rights leader once called “the most segregated city in America.”

The King signatures, a dozen in all in ink, are contained on four yellowed pages that have been removed from the original book. The pages also bear the signature of King friend and aide Ralph D. Abernathy, who was arrested during the same march as King on April 12, 1963, for violating a court order banning the demonstration. 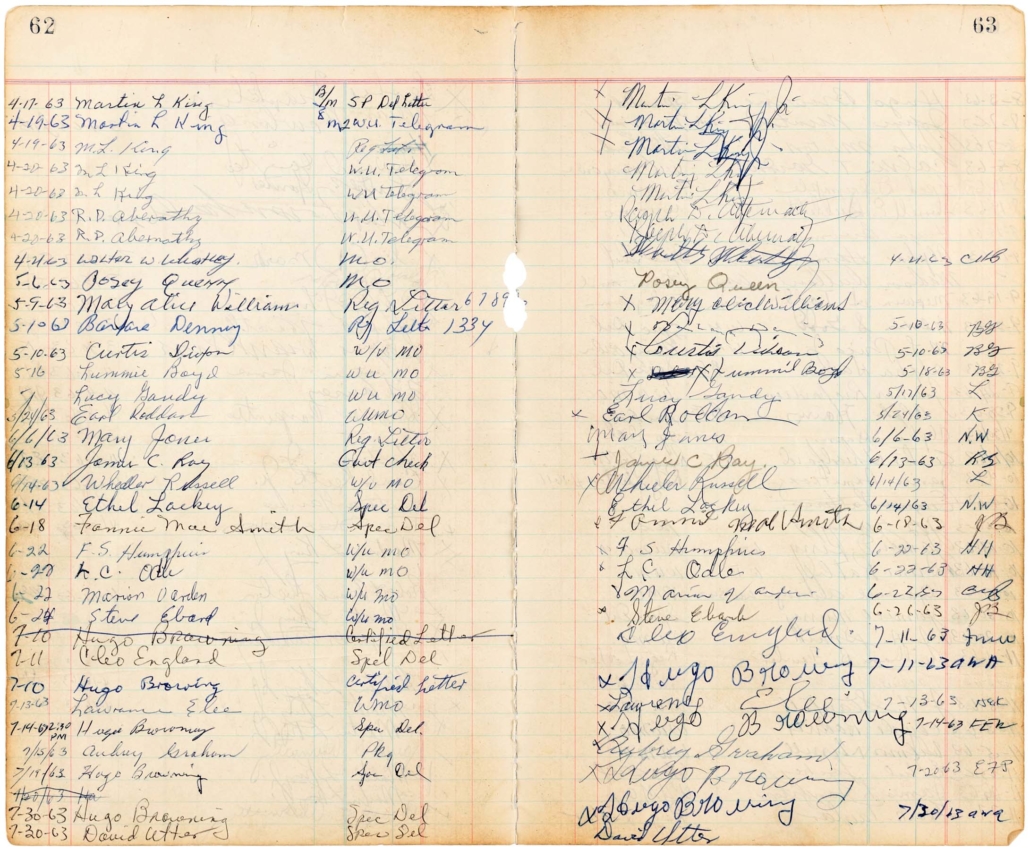 Scott Mussell, who works for the Pennsylvania-based auction company, said a worker might have been instructed to clean out the old building and, realizing what the log book contained, saved it instead.

“We really owe a debt of gratitude to this person, in my opinion,” said Mussell, an Americana specialist with the Pennsylvania-based company.

Jim Baggett, the head of archives at the city library, said he was unfamiliar with the jail log, but it was entirely possible a worker saved it from being destroyed.

“We have stuff here that survived because someone pulled it out of the trash,” he said.

Will Seippel’s Atlanta-based WorthPoint, which values collectibles and other items online, lined up document experts and signature authenticators to verify that the pages are genuine after being contacted by the current owners, the relatives of a person who was given the sheets by the person who initially saved them.

“They were trying to figure out what they had and whether it was real and what it was worth,” he said. The online auction will end on Feb. 24.

King and his Atlanta-based Southern Christian Leadership Conference joined with the Alabama Christian Movement for Human Rights, led by the Rev. Fred L. Shuttleworth, in 1963 in a campaign meant to pressure the city’s white leadership to end legalized racial segregation. The city was soon the scene of pickets, mass meetings, a boycott of downtown businesses and lunch counter sit-ins.

The city obtained a court order blocking further demonstrations, but King and Abernathy led a march that ended in their arrest. Held in isolation in the city jail, King wrote his almost 7,000-word treatise in response to a statement published by seven white ministers and a rabbi who called the demonstrations “unwise and untimely.”

Writing in the margins of a newspaper, King penned a defense of the civil rights movement that included the line: “Injustice anywhere is a threat to justice everywhere.”

Carried out of the jail by his lawyers and transcribed, the letter initially was distributed on mimeographed sheets before being reprinted in its entirety in pamphlets, magazines, King’s 1964 memoir and newspapers. It is now regarded as one of the greatest defenses of nonviolent protest ever written.

The old jail logs don’t indicate the contents of telegrams and letters King received while incarcerated, and only a historical marker stands now at the site of the building. Metal bars from the cell where King was held were preserved and are now on display at the Birmingham Civil Rights Institute.

Baggett, the city archivist, said the jail pages should wind up somewhere people can see them.

“I hope somebody buys this that will put it on display,” he said.