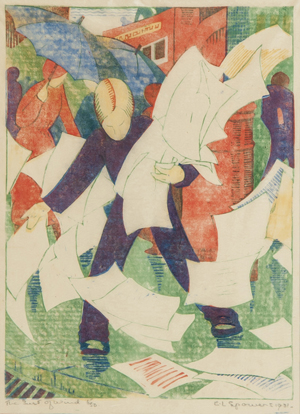 LONDON – Bloomsbury Auctions’ thriving Modern and Contemporary Prints department has always focused on British avant-garde print making, leading the way and championing many artists, who until recently were little known but who today, are a pivotal part of the modern and contemporary print world. On Tuesday Dec. 4, Bloomsbury will hold its Modern and Contemporary Prints sale, with Internet live bidding through LiveAuctioneers.com.

As always the large “end of year sale” embraces a wide spectrum of major names and includes, for example, the complete portfolio of 10 silkscreens of Andy Warhol’s “Electric Chairs” printed in colors, each signed and numbered from the edition of 250 with a rubber stamp and estimated £60,000-£80,000. However, it is the collection of Grosvenor School and important British avant-garde prints that will set pulses racing.

Bloomsbury is offering two extremely rare lithographs by the war artist Paul Nash. Both are signed and dated; one is a proof aside from the edition of 25 and the other is from an edition of 25. They each come different private collections and neither has ever been on the market before. “A Shell Bursting, Passchendaele, 1918” is estimated £25,000-£35,000 and comes from a close family friend of the artist. It depicts the after effects of The Battle of Passchendaele, which took place on the Western Front between June and November 1917. The action, close to Ypres, was considered of great strategic importance. Passchendaele featured the combined Allied forces taking part in long stretches over its course. Casualties were very high and disputed, it is estimated that both the Allies and the German Empire lost between 200,000 and 400,000 men on each side.

Paul Nash had enlisted in the Artist’s Rifles (a volunteer regiment which is today known as the SAS) and in February 1917 was sent to the Western Front. Shortly before the Ypres offensive, Nash was wounded, and while recuperating he produced a series of drawings and paintings documenting his months in the trenches. These works were particularly well received and consequently when he returned to the Front in early November 1917, it was as an official war artist. Within weeks he was thrust into two major allied offenses. From 1917, Nash produced some of the most powerful documents of the First World War, the Battle of Passchendaele being amongst the very first.

“Mine Crater, Hill” is another extremely rare signed and dated lithograph which comes from the private collection of an artist who had not only studied with Nash, but who had also served with him during the War. It is estimated £20,000-£30,000. The Allied tunnelling and destruction of the mines at Messines were amongst the most audacious plans of WWI; the plot involved tunnelling deep underneath the German lines and planting huge quantities of explosives. At 3.10am on 7th June 1917 the explosives were detonated simultaneously, and although only 19 of the 21 mines exploded, the German lines were decimated. It is said that this action created one of the largest explosions in history, reportedly heard from as far away as London and Dublin. Nash said of his role as a war artist, ‘I am no longer an artist. I am a messenger who will bring back word from the men who are fighting to those who want the war to go on forever. Feeble, inarticulate will be my message, but it will have a bitter truth and may it burn their lousy souls.”

Another gem in Bloomsbury’s sale is “On the Road to Ypres” by CRW Nevinson. It is one of the finest pen and ink sketches of WWI to appear on the market. It has never been offered before and it is probable that this signed 1916 sketch is the preliminary sketch for the drypoint of the same date. “On the Road to Ypres” is expected to fetch £50,000-£70,000.

“Flight” is a rare signed and dated 1917 woodcut by Edward McKnight Kauffer. This fine and richly inked early impression is the most Vorticist of McNight Kauffer’s very small output, and one which was used as a poster design for the Daily Herald, with the strap-line ‘Soaring to Success! Daily Herald – The Early Bird’ symbolizing postwar optimism. He was one of Britain’s most influential 20th-century poster designers and graphic artists. Cubist in style and also a homage to Vorticism, “Flight’ is estimated at £30,000-£50,000.

A highlight of Bloomsbury’s Grosvenor School and important British avant-garde prints is “Speed Trial” by Cyril Edward Power (lot 68). This dynamic tour de force is undoubtedly one of the most striking and recognizable images to come out of the Grosvenor School. “Speed Trial” exemplifies man and machine against time, created in the unique color combinations of emerald green, spectrum red and permanent blue, it is a one-off experimental proof, aside from the published edition of 60. In the 21st century we are constructing the Bloodhound Super Sonic Car estimated to reach 1000mph, but it was Malcolm Campbell’s Bluebird SSC in February 1931 that broke all previous land speed records, reaching a then-unheard-of speed of 246 miles per hour. It was this landmark event in car engineering that inspired Power’s Speed Trial, one of the most iconic linocuts of the Grosvenor School. A framed example recently sold for £96,000, a world record for Grosvenor School. Bloomsbury Auctions’ unique example is estimated £80,000-£120,000.

Over the years, Bloomsbury has achieved world record prices for Lill Tschudi, and this sale now offers a wide selection of works by the Swiss artist, ranging from £600 up to £20,000. Lill Tschudi’s distinctive linocuts can be seen in various public collections from the British Museum and Victoria & Albert Museum in London to the Metropolitan Museum of Art in New York and the National Gallery of Australia. Bloomsbury is now offering a study in watercolor with crayon of “Fixing the Wires,” generally regarded as one of Tschudi’s most iconic images. Never before on the market, this privately owned piece is expected to fetch £12,000-£15,000.

The Australian artist Ethel Spowers is another major exponent of the Grosvenor School. The 1930-31 richly inked, early impression numbered 5/30 of the signed linocut “A Gust of Wind” printed in colours, was acquired directly from the artist by the grandfather of the present owner, who played an integral part in the success of the Grosvenor School. Last spring “A Gust of Wind” in different colors made $114,500; Bloomsbury is estimating its example at £40,000 – £60,000.

Following in the footsteps of Futurism, the Grosvenor School captured the spirit of its time, immortalising the rapidly changing world of the 20s and 30s. It enjoyed a brilliant but all-too-brief wave of popularity in the late 1920s. By the mid 30s, this had waned, only to be rediscovered in the 1970s, and its appeal has been growing steadily ever since. Today it has a worldwide reputation, partly thanks to its championing by Bloomsbury Auctions’ Modern and Contemporary Prints department. 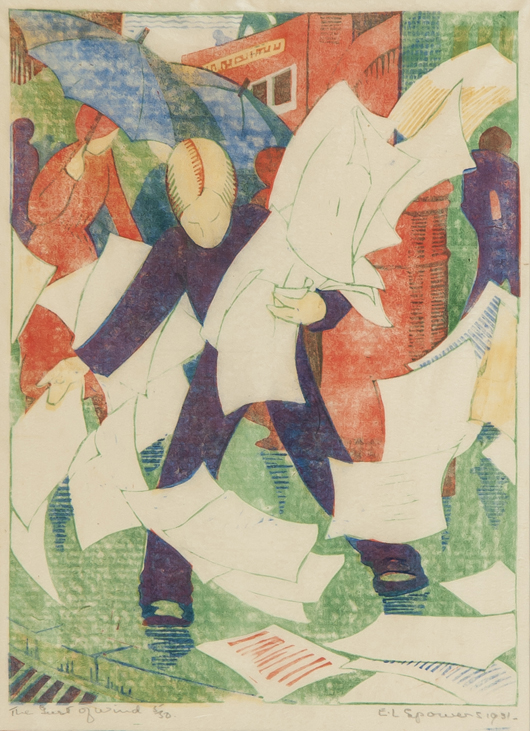 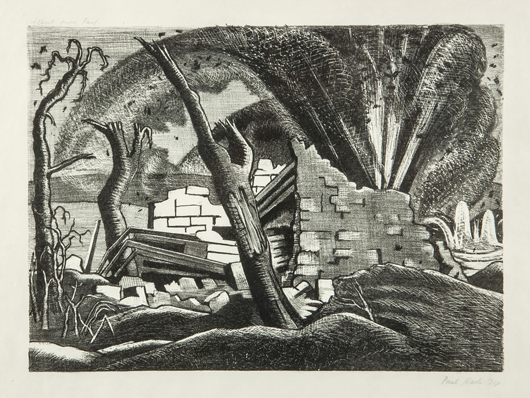 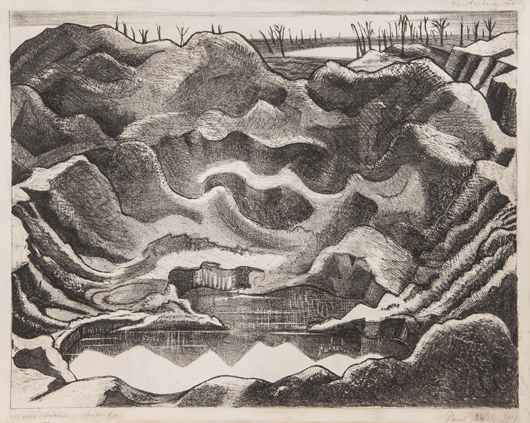 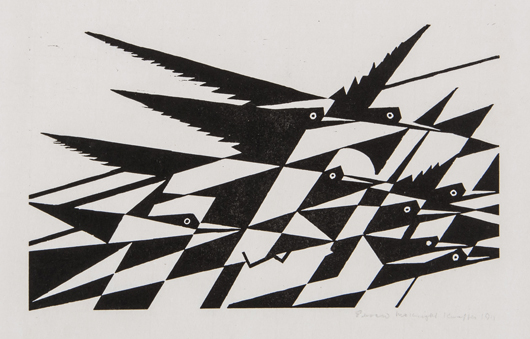 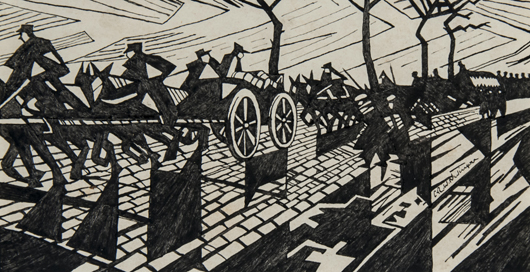 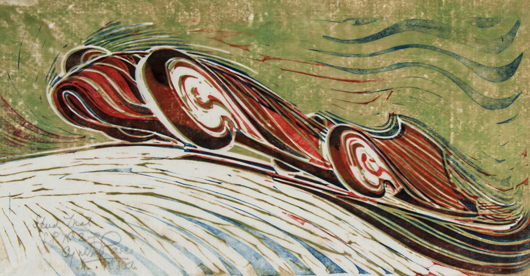 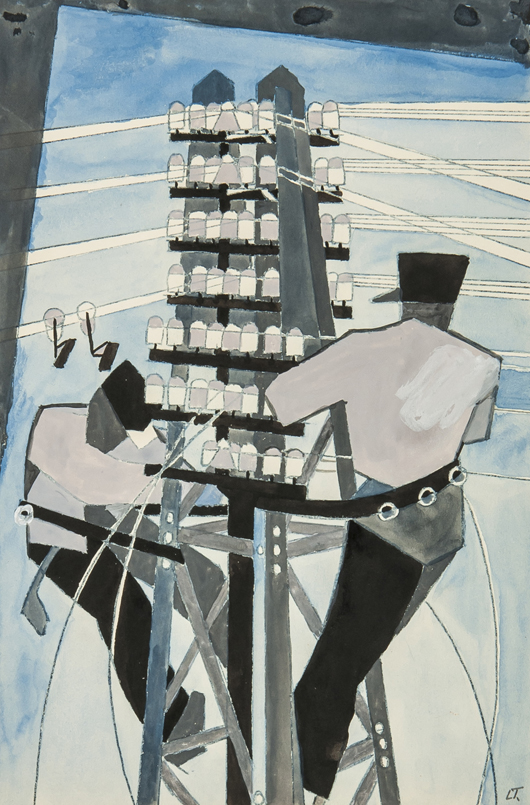 Leica camera snapped up for $2.18M at Westlicht auction