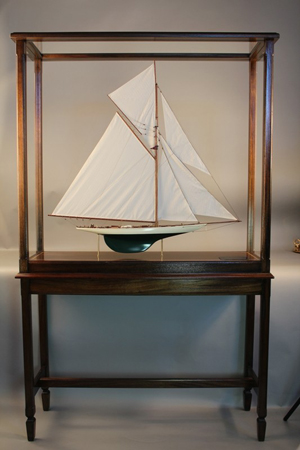 BOSTON – Boston Harbor Auctions is hosting another incredible auction showcasing the great history of yachting on Sunday, Oct. 16, beginning at 11 a.m. Eastern. Internet live bidding will be provided by LiveAuctioneers.com.

The auction will include a two-thirds size pewter recreation of the America’s Cup owned by Chandler Hovey. If we consider the prestige of the America’s Cup races, and the presentation of the highest award being the cup, the idea that a person subsequently commissioned a replica to bestow on the icon of yachting that Hovey was, puts the exclusivity of the piece in perspective.

The auction will contain a selection of several original press photos from the America’s Cup races and other trial races dating back to the 1930s when the great J Class yachts were introduced. There is press representation of T.O.M. Sopwith with his wife at the helm of Endeavour, as well as shots of Enterprise and later yachts like Courageous. Included in the press photo collection are some gems of financiers J.P. Morgan and J.P. Morgan Jr., illustrating their passion for travel and leisure by yacht. One of the photos is of a captured shark that was caught onboard Corsair IV in 1934 from a cruise to the Galapagos Islands. There is also a rare public shot of J.P. Morgan Sr. in Monaco dated Feb 17, 1913, taken six weeks before his death. Always shunning photographers, could this be the last public photo taken of Morgan before he passed?

The subjects of many America’s Cup yachts such as Defender, Rainbow, Yankee, Columbia and Chandler Hovey’s Easterner, among others, are represented in original photographs from noted photographers including Morris Rosenfeld (1884-1968), J.S. Johnston (circa 1839-1899), Edwin Hale Lincoln (1848-1938) and Albert Cook Church (1880-1965).

Other original photos include a set of three-color shots of President John F. Kennedy aboard a yacht with sailing companions that include a young John Kerry. The reverse of each photo is stamped “By R.L. Knudsen PHC, USN Office of the Naval Aide to the President.”

The sale will contain a vast collection of ship models detailing the America’s Cup and the steam yacht era. Endeavour and Rainbow of 1934, Sir Thomas Lipton’s Shamrock V of 1930, America of 1851, Columbia of 1901 and others will be auctioned. A magnificent model of the Kaiser Cup winning schooner Meteor IV, owned by Kaiser Wilhelm, the last German Emperor is for sale in a grand mahogany display case.

The presidential steam yacht Mayflower of 1897, which was used to entertain and transport diplomats to Portsmouth, N.H., for the termination of the Russo-Japanese War resulting in the Treaty of Portsmouth is included in the sale. Jay Gould’s Niagara, J.P. Morgan’s Corsair, George Baker’s Harvard and other symbolic yachts of the gilded age of steam travel are included in the sale. Other models include a prisoner of war bone model from the Napoleonic era, a dockyard builder’s model of the Queen Christina, as well as classic schooners, tugs, trawlers, lightships, freighters, graceful clipper ships and stately frigates.

A showpiece of the auction will be the 1873 Tiffany & Co. burlwood humidor-decanter set from the Seawanhaka Yacht Club of New York. The gorgeous humidor was used as a trophy to commemorate the Livingston Cup on July 4, 1873 and presented to the Atlantic Yacht Club of Brooklyn, N.Y. The humidor has three cut glass decanters and five port glasses. The bottom drawer opens to a silver humidor with two compartments for cigars and a center trough for water. The box is of burlwood maple with brass accents. A gilt bronze plaque accompanies the decanter set containing a list of winning yachts and their owner’s names from the inception of the cup until 1899.

Several lots of linen napkins from J.P. Morgan’s yacht Corsair will be sold. Stitched onto each napkin is the Morgan House flag symbol of a crescent moon and single star. Various pieces of yachting china bearing the burgee of the New York Yacht Club and various owner’s flags such as inventor A. Atwater Kent, the Whitney family of Vanderbilt fame, J.P Morgan, Congressman Joseph Crocker Sibley of Pennsylvania, Alfred P. Sloan, president and founder of General Motors and others.

Another showpiece in the sale is a rare pair of silver goblets from Howard & Co., New York, dated 1898 that were presented to J.P. Morgan by Capt. J.C.R. Peabody and his wife Florence (Wheatland) Peabody onboard Corsair when she was flagship of the New York Yacht Club. The front of each goblet is engraved “Corsair 1898” in script. The bottoms of each goblet are engraved “From J.C.R. & F.P.” accompanied by the maker’s stamp and “sterling.” Jacob Crowninsheild Rogers Peabody is the grandson of Francis Peabody of Massachusetts, former president of the Essex Institute and the great-grandson of Joseph Peabody, successful merchant and competitor in the China trade, of Salem, Mass. He was the brother-in-law of Endicott Peabody, founder of the Groton School for Boys. He is the 10th-generation descendent of Gov. John Endicott and is the cousin of John Lowell Gardner, husband of Isabella Stewart. His wife, Florence Wheatland is the great niece of the founder of the Essex Institute. Both were very active in the social circles of Boston and New York. Jacob Peabody, noted in the Morgan papers contained in the Morgan Library that he is powers of attorney, was a close Harvard classmate and friend of J.P. Morgan Jr. and so named him godfather to his only son, Richard. Richard was a World War I war hero and social reformer who went on to marry Polly Phelps Jacobs who, with her second husband, poet Harry Crosby, nephew of J.P. Morgan Jr., founded the Black Sun Press. The goblets will be sold in two separate lots and stand 6 1/4 inches tall x 4 5/8 inches in diameter.

Other pieces in the auction will include marine paintings by noted artists such as Edouard Adam (1847-1929), Burnell Poole (1844-1933), Clement Drew (1806-889) and Randy Burke along with several oils of America’s Cup yachts, steam yachts and catboats. There is a unique race photo album of the 1931 transatlantic cruise of the Landfall by Uffa Fox. The album contains over 200 silver bromide photographs that are 2 1/4 inches by 3 1/4 inches. Pictures of the voyage from Bristol, Rhode Island to Plymouth England on to Cowes, then Dover and on to Bremen, Germany. Represented in the beginning of the album is Nathaniel Haereshoff of the Herreshoff yard with the yachts Enterprise and Yankee as well as Aloha.

The auction will be conducted at185 Purchase St. (corner of Congress Street) in the downtown Waterfront District of Boston. 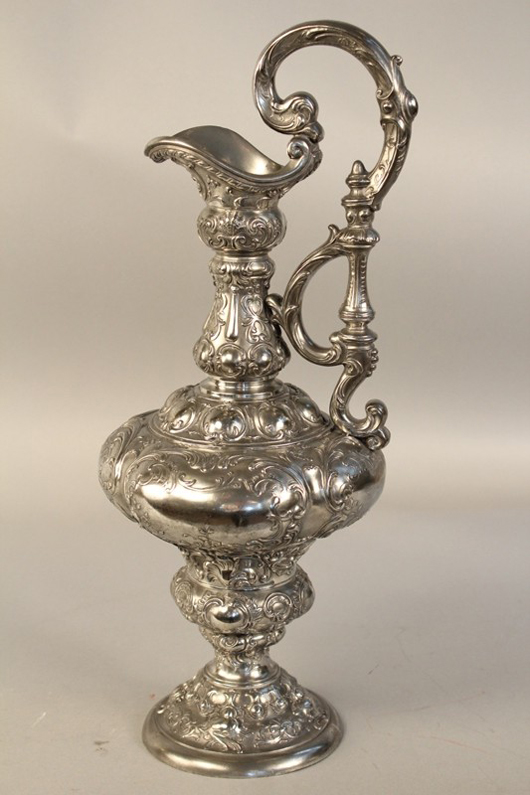 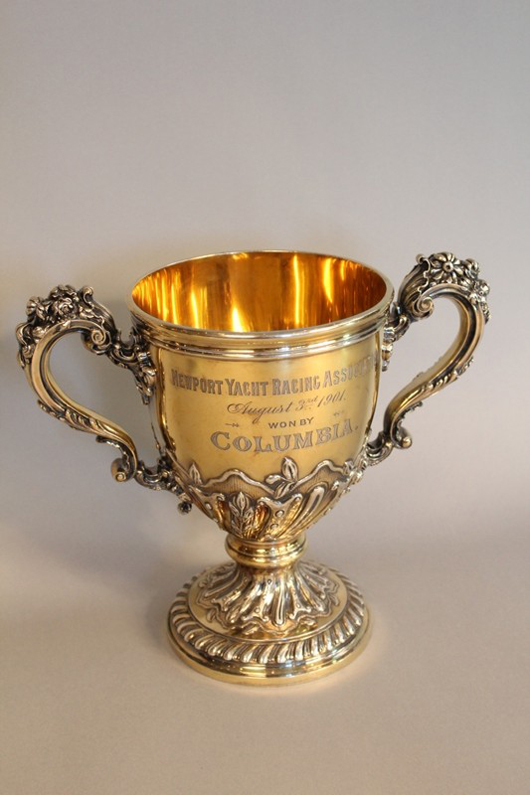 Trophy from the Newport Yacht Race Association for Columbia of 1901. Image courtesy of Boston Harbor Auctions. 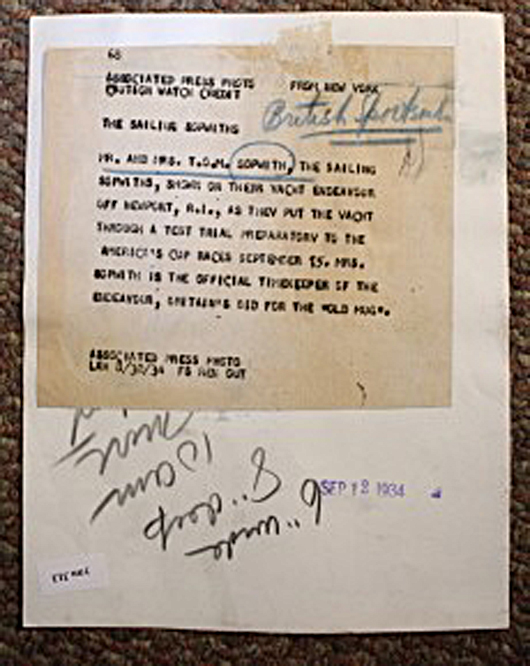 Photo of T.O.M. Sopwith and his wife at the helm of Endeavour. Image courtesy of Boston Harbor Auctions. 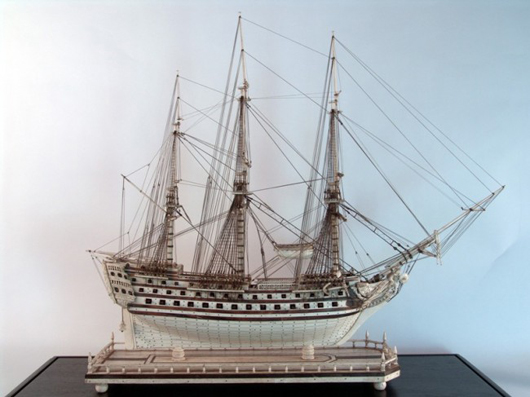 The fleet’s in for Boston Harbor Auctions’ Marine Auction Nov. 7