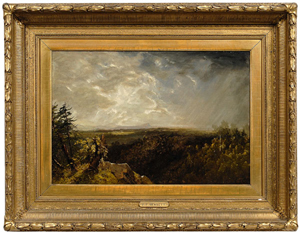 ASHEVILLE, N.C. – The first detailed map of the entire state of Georgia ever to be published will be a star attraction at the Jan. 2-3 sale at Brunk Auctions. LiveAuctioneers will provide Internet live bidding.

Daniel Sturges, Georgia’s surveyor general from 1797 to 1809, spent 20 years gathering data for the map. Published in 1818, it is said to have been the map that guided the Marquis De Lafayette on his 1825 tour of the state. Oddly, Sturges’ name does not appear on the map. Because of financial difficulties, he sold it to his brother-in-law, Eleazer Early, prior to publication. Early had the map published and added his name to the title. The map is separated into 50 panels, each 5 3/4 inches by 9 inches. Shown in great detail are the state’s 39 counties as well as Indian territories that are today portions of South Carolina, Alabama and Florida. Georgia’s Bourbon County became the state of Mississippi in 1788. The map, which last sold in 1967 at Parke-Bernet Galleries in New York, is expected to bring $15,000-$25,000.

There are more Georgia lots to entice dealers and collectors from across the border. An 1800-1820 walnut corner cupboard from Marietta, a poplar and birch hunt board, a pie safe with Masonic symbols and pottery from the Meaders family pottery are also on the block.

Charleston, S.C., is also represented in the sale with an important Federal inlaid china press, circa 1800. Standing 108 inches tall, it includes a fitted butler’s desk with what are believed to be the original brasses. An arched cornice with a large conch shell ornament stands over two glazed doors. Interior shelves in the upper case are fixed. The estimate for the mahogany press is $30,000-$50,000.

North Carolina pottery, a walnut sugar chest, and paintings are included in the sale, but two samplers are attracting much attention.

Latostia Young lived in Columbus County, N.C., until her death in 1914. In 1842, she stitched a four-line verse, six lines of letters and numerals, and a tree, sheep, stag and vines in silk onto a 16- by 16 3/4-inch piece of linen. The tall narrow trees and long-tailed sheep may indicate that a teacher from Charleston, S.C., guided Young in her sewing lessons. Young’s sampler is expected to sell for 2,000-$4,000. Margaret Henderson’s early- to mid-19th-century 11-line sampler was from Lincoln County, N.C. She used silk and cotton thread on a cotton cloth to craft her 14 3/4- by 11 3/4-inch sampler. Henderson’s sampler is valued at $500-$1,000.

In the middle of a collection of 76 paintings for sale Jan. 2 is Recollections of a Storm from the … , an unsigned oil on canvas attributed to John Frederick Kensett (American, 1816-1872). The painting is included in the upcoming catalogue raisonné for Kensett compiled by Babcock Galleries, New York. The estimate on the Kensett is $200,000-$300,000.

Along with Sanford Robinson Gifford, Fitz Hugh Lane, Jasper Francis Cropsey and Martin Johnson Heade, Kensett is considered part of the second generation of Hudson River School artists. The group also became known as the Luminists for their detailed treatment of outdoor light. That trait can be clearly seen in Recollections, a painting of rain and swirling storm clouds in New York’s Catskill Mountains.

In 1765, innovative Birmingham industrialist Matthew Boulton (1728-1809) created one of England’s largest and best-equipped metalwork factories. Some of his earliest products were household wares in silver plate and Sheffield plate or silver-plated copper. Boulton and his business partner James Watt, the inventor of the steam engine, were central figures in England’s Industrial Revolution. In Brunks’ January sale are two examples of Old Sheffield plate from the early 19th century with clear marks for Boulton: a silver epergne and a pair of candelabra.

Cut glass bowls sit atop the four arms of the epergne with a large matching bowl on the rounded center stand. Brunk Auctions expects the Boulton epergne, which measures 13 by 20 3/4 by 18 1/4 inches, to bring between $8,000 and $15,000. A 26-inch candelabra pair, each with three scroll arms, four urn-form sockets, reeded columns, gadrooned borders and acanthus decoration, is estimated at $2,000-$4,000.

The January sale at Brunk Auctions begins at 9 a.m. both days.

Brunk Auctions is located at 117 Tunnel Road in Asheville. For details, visit www.brunkauctions.com or call 828-254-6846. 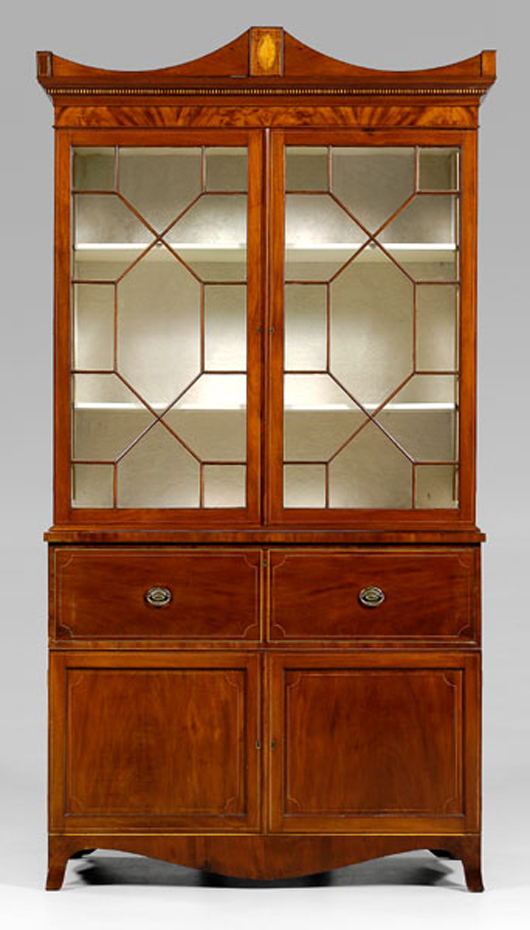 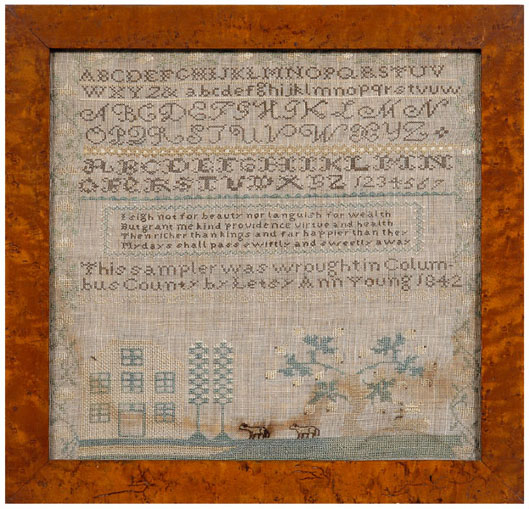 The verse included on Letsy Ann Young’s 1842 sampler was from a hymn titled ‘Morality’ published in 1835. Variations of the tall trees and long-tailed sheep may connect Young’s sampler to the Charleston, S.C., area. Estimate: $2,000-$4,000. Image courtesy of Brunk Auctions. 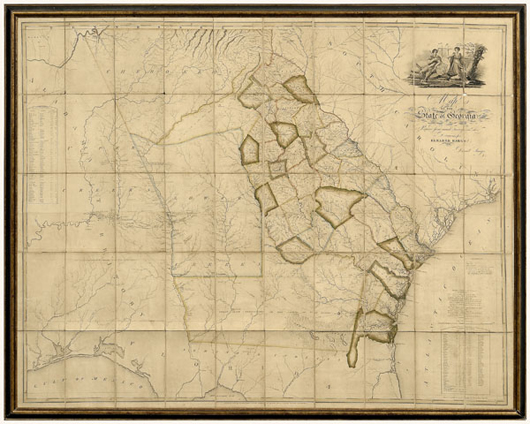 Two pages in the catalog are devoted to the 1818 Georgia map ‘prepared from actual surveys and other documents for Eleazer Early.’ Daniel Sturges did the research, Samuel Harrison the engraving on the map. Image courtesy of Brunk Auctions. 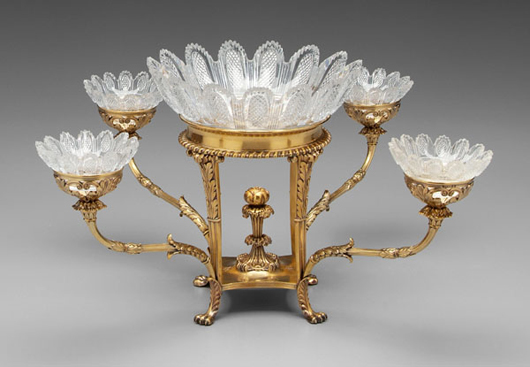 Marks for Matthew Boulton, 1817 and Birmingham were impressed on this George III silver epergne with golt finish. The epergne is expected to bring $8,000-$15,000. Image courtesy of Brunk Auctions.