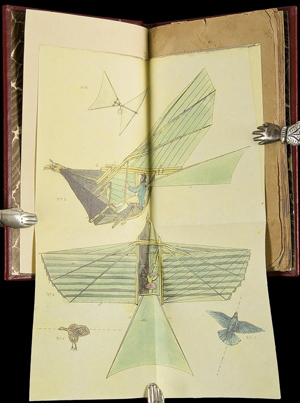 Thomas Walker’s ‘A Treatise Upon the Art of Flying’ is illustrated in this print, which folds out of the 1810 volume. The rare book measures 8 1/4 by 5 inches. Image courtesy of PBA Galleries.

SAN FRANCISCO – PBA Galleries’ Sale 420 will feature nearly 500 examples of antique cartography before riding into uncharted territory of the Gene Gammel Collection of cowboy toys and memorabilia. The auction will be conducted Jan. 21 beginning at 11 a.m. Pacific. LiveAuctioneers will provide Internet live bidding.

A 17th-century map that made Europeans aware of early settlement of America is Willem Blaeu’s reissue of Jodocus Hondius Jr.’s map of Virginia. Blaeu purchased the original plate in 129, updated the map and published a more attractively engraved map in 1640. The map offered by PBA Galleries could possibly have been printed as late as 1655. It measures 15 inches by 19 inches and has a $3,000-$5,000 estimate.

Also from the 17th century is a first edition of Historia Conquista de Mexico by Antonio de Solis, which was published in Madrid in 1684. It is considered the most important work of Solis, a Spanish historian, dramatist, statesman and King Philip IV’s private secretary. Bound in full red morocco and measuring 10 3/4 inches by 7 1/4 inches, the book is expected to sell for $4,000-$6,000.

Walker’s Treatise Upon the Art of Flying is a 67-page book published in 1810 that examines the natural principles by which birds fly. Making this first edition so intriguing are author Thomas Walker’s “plans for making a flying car with wings, in which a man may sit, and, by working a small lever, cause himself to ascent and soar through the air.” It contains a foldout illustration of the bird-like flying machine. The estimate is also $4,000-$6,000.

A book published in 1885 by the U.S. Printing Office titled Report on the Internal Commerce of the United States contains a fascinating examination of the cattle industry. The 562-page book is considered to be among the most important of the “Big Four” cattle books of the period. It measures 9 inches by 5 3/4 inches and contains five folding color lithograph maps at the end. It has a $4,000-$6,000 estimate.

Charles Wilkes was a 19th-century American naval officer who commanded exploration expeditions to the Pacific Northwest, Hawaii and Antarctica. He documented the expeditions in Narrative of US Exploring by Wilkes 1838-42. The six-volume set, which includes an atlas, offered by PBS Galleries is a third edition in original blind- and gilt-stamped cloth. It contains 64-steel-engraved maps. Published in 1845, the set has a $4,000-$6,000 estimate. 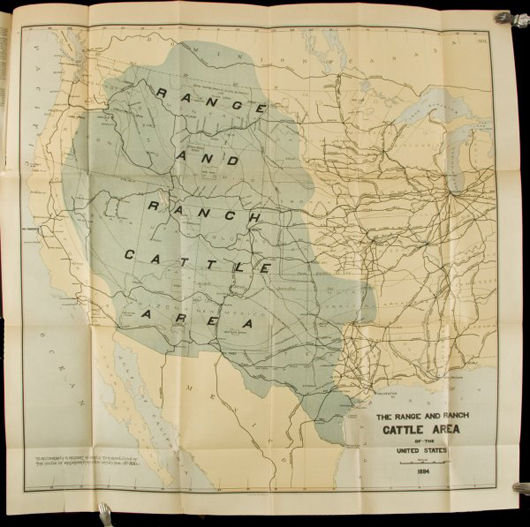 The map titled ‘Rage and Ranch Cattle Area,’ which is shaded green, encompasses much of the western half of the United States. It is contained in ‘Report on the Internal Commerce of the United States,’ published by the Government Printing Office in 1885. Image courtesy of PBA Galleries. 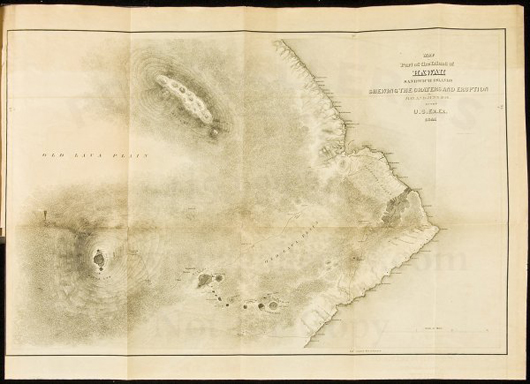 ‘Part of the Island of Hawaii’ is one of 64 steel-engraved plates contained in Charles Wilkes’ six-volume set titled ‘Narrative of US Exploring,’ published from 1838 to 1842. Image courtesy of PBA Galleries. 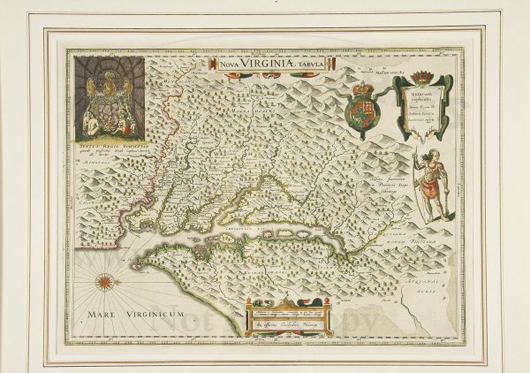 Willem Blaeu refined Jodocus Hondius Jr.’s 1618 map of Virginia and published it in Amsterdam in 1640. This copy may have been printed as late as 1655. The copper-engraved, hand-colored map measures 15 inches by 19 inches. Image courtesy of PBA Galleries. 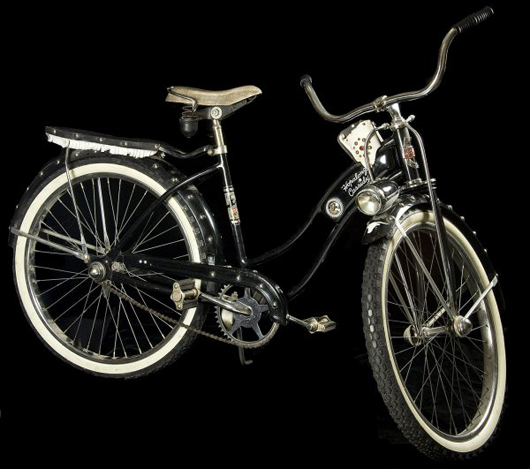 The Hopalong Cassidy bicycle by Rollfast is considered the pinnacle of any Hoppy collection. This unrestored girls model with 24-inch wheels has a $2,000-$3,000 estimate. Image courtesy of PBA Galleries.

38.8% sells online on day 2 of Tavern on the Green auction