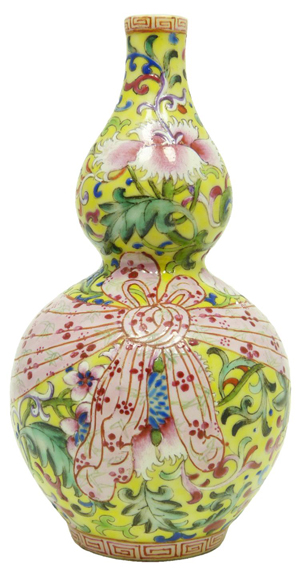 The auction will be the final event of the summer season for Elite Decorative Arts, a firm that has become synonymous with Chinese antiquities and rare Asian objects.

“It has become difficult to assign some items high and low estimates, because the market for Chinese antiques, especially porcelain pieces, is so hot right now,” said Scott Cieckiewicz, an officer with the firm.

He added, “In the end, it will be the bidders who determine the value of these lots. That’s the beauty of an auction. It’s an accurate and instant barometer of market conditions.”

A piece of jewelry, not a porcelain, may end up being the day’s top earner. It’s a woman’s 18k yellow gold imperial jadeite cabochon and diamond ring/pendant combination (est. $40,000-$50,000, against an appraised value of $80,000). The center of the ring/pendant is prong set with a fine oval cabochon cut natural Burmese jadeite weighing a staggering 12.50 carats.

A large Chinese Qing Dynasty relief carved, fully reticulated ivory tusk, depicting a total of 24 men and women, each wielding an item, has an estimate of $6,000-$8,000. The people are situated among pine trees and enclosed by dragons and phoenix birds. The tusk is 53 1/2 inches in length, with an ivory weight of 4.96 kilograms. It includes a fitted wooden stand.

An impressive and palace-size Chinese carved jadeite pagoda village, featuring five pagoda towers with an overall height of 98 inches, is expected to make $10,000-$15,000. Each pagoda is linked to the next with a hanging chain. The massive late Qing to Republic period village shows a total of eight foo dog figures, four tripod dragon urns and four dragon plaques.

Another jade piece expected to do well is a Chinese Qing Dynasty, hand-carved jadeite Guan yin (Quan Yin) figure of a woman, depicted in a standing position with a tassel in the right hand and a bead in the left (est. $7,000-$10,000). A nimbus can be seen behind her head and she is standing on a stylized lotus blossom base. The piece is 15 1/2 inches tall and weighs 3,192 grams.

Two bronze pieces are certain to get attention. One is a Chinese Tang Dynasty silvered bronze mirror, well cast and of disc form, with the central hemispheric knob enclosed by calligraphy and with a sunburst design to the center (est. $6,000-$8,000). The mirror, 8 1/2 inches in diameter, shows a raised serpent, a dragon, phoenix and chin lung dragon with lotus blossoms.

The other is a Chinese Tibetan bronze figure depicting a seated Quan Yin goddess with four arms seated over a lotus blossom throne (est. $5,000-$7,000). The figure, dating to the Ming Dynasty, is 15 1/4 inches tall and has a total weight of 4.14 kilograms (almost 5 pounds). It was purchased in New York in the 1980s and was consigned from an important St. Louis collection.

Porcelains will be offered in abundance. Two have pre-sale estimates of $5,000-$7,000. The first is a rare imperial Chinese heritage Kangxi period Qing Dynasty Famille Verte plate. The plate is unusual in that it bears an incised inventory mark (N481) from the Dresden collection, formed by Augustus the Strong (1670-1733), the former King of Poland and Elector of Saxony.

The second is a Chinese Qing Dynasty Famille Rose enameled double gourd hulu form vase. The piece holds the red, six-character archaic Qianlong period (1736-1795) reign mark to the bottom, and is made of the period. It is 4 3/4 inches tall and weighs 134 grams and shows a vibrant scrolled floral design over yellow ground, with pink draped cloth knotted to the front.

Two other porcelain pieces of note carry estimates of $2,000-$3,000. One is a 19th century Chinese phoenix tail form blue and gold vase, 13 3/4 inches, with a hand-painted gold design depicting a paradise bird on a tree branch with lotus blossoms over a cobalt blue ground. The vase holds blue six-character calligraphy Qianlong (1736) period reign marks to the bottom.

One more jade piece of note is a massive Chinese relief carved jadeite boulder depicting a seated laughing Buddha with five attendants climbing on him and playing musical instruments (est. $6,000-$8,000). Also in the scene are two foo dogs, both climbing on the Buddha. The 16 8 1/2- inch-tall late Qing to Republic piece has mottled white, lavender and apple green jadeite colors.

Elite Decorative Arts’ next big sale after this one will be a fine porcelains and decorative arts auction slated for Saturday, Sept. 15. Quality consignments are still being accepted. To consign an item, an estate or a collection, call 800-991-3340 or email info@eliteauction.com. 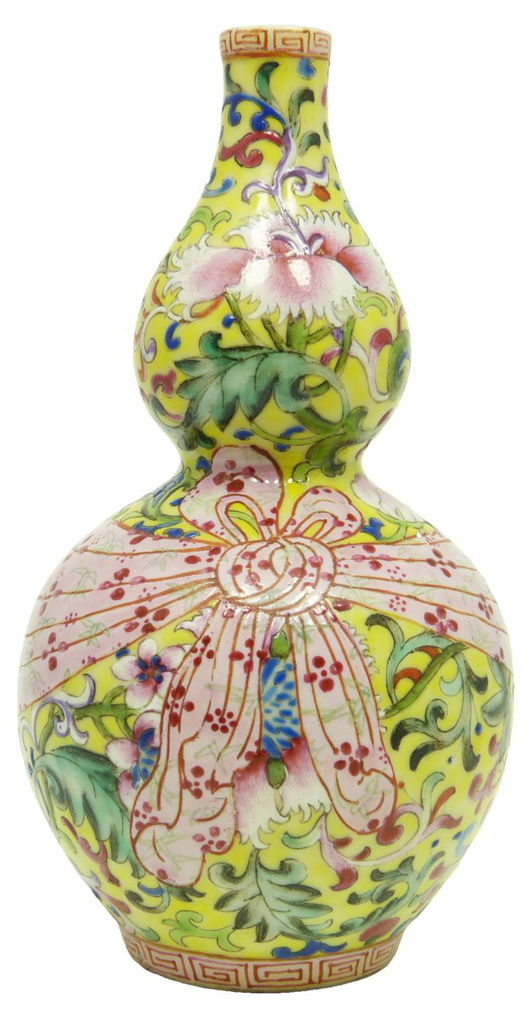 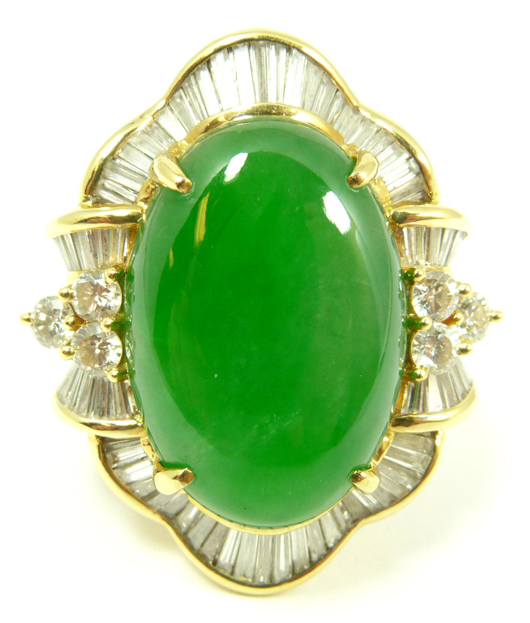 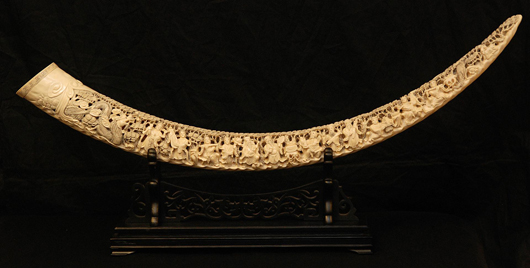 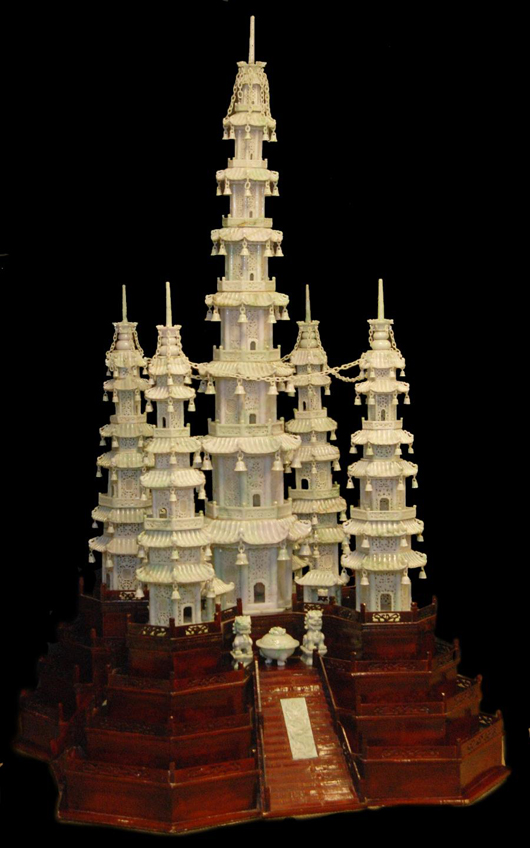 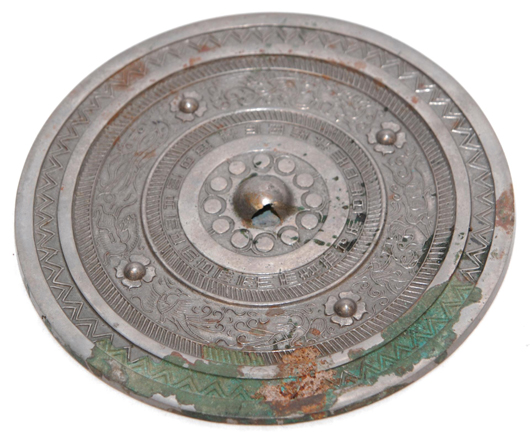 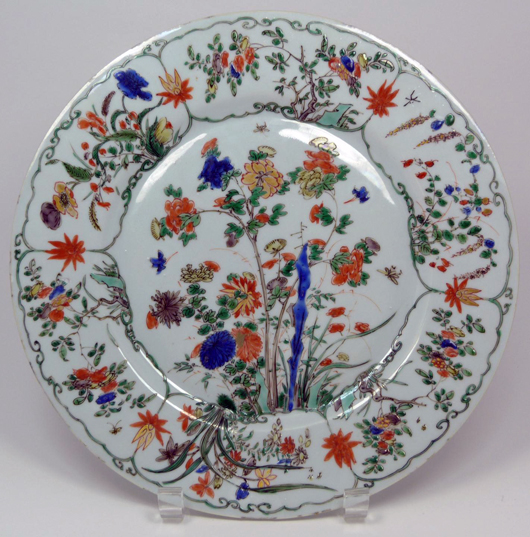