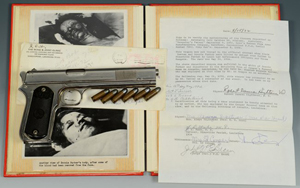 Outlaw Bonnie Parker never had time to pull this Colt .38 pistol before she and Clyde Barrow were ambushed. The gun, bullets and photo archive will be sold at Case’s Jan. 25 auction with a $125,000-175,000 estimate. Case Antiques image.

KNOXVILLE, Tenn. – The more than 900 lots of fine art and antiques offered at the Winter Case Antiques Auction on Jan. 25 make it one of the biggest in the company’s history. Arguably the most colorful item in the sale is one with a sensational past: a pistol found on body of outlaw Bonnie Parker.

An embalmer at the Conger Funeral Home in Arcadia, La., discovered the weapon enfolded in Parker’s skirt after law enforcement officers ambushed and killed her and her partner, Clyde Barrow, in 1934. According to the affidavit that accompanies the gun, the embalmer gave the Model 1902 Colt .38 as a souvenir to the son of fellow funeral home employee Vern Hightower. It has descended directly in his family to the consignor, who now lives in Tennessee. Six bullets found in the gun’s magazine clip and an archive of photographs from the infamous duo’s violent end are also included with the lot.

“There are a few other weapons connected to Bonnie and Clyde that have sold in years past, but this is one of the most extensively documented examples to ever come on the market,” said company president John Case, noting that the affidavit is signed by James Wade, the coroner in charge of the Bonnie and Clyde death investigation. The lot is expected to fetch $125,000-$175,000.

Fine art, one of the dominant categories in the sale, is led by a large-scale oil landscape by Hudson River School artist William Louis Sonntag, accompanied by a copy of a letter from the artist to its original owner. The painting was formerly exhibited at the Knoxville Museum of Art and its predecessor, the Dulin Art Gallery. Other artworks with exhibition histories include a still life with pheasants and shotgun by John Steuart Curry, exhibited at the Whitney Museum of Art in 1941 and illustrated and discussed in the book John Steuart Curry: Inventing the Middle West, and a moonlit canal scene by important 19th century Norweigan/French artist Fritz Thaulow. The Thaulow painting was originally owned by gilded age tycoon John “Bet-a-Million” Gates, whose family loaned it to the Minneapolis Institute of Arts for exhibit in 1915. Fans of Norman Rockwell will take note of an original oil and gouache study of a pirate and two Rockwell-signed lithographs, and Civil War buffs will likely be interested in a 19th century oil portrait of Gen. P.G.T. Beauregard in his Confederate uniform. A 19th century still life with monkey by Thomas Waterman Wood, formerly owned by CSA Col. Henry Yeatman of Hamilton Place in Columbia, Tenn., will cross the block, as will a trio of portrait miniatures depicting members of the Trezevant family of Charleston, S.C., and a Robert Hopkin seascape.

Twentieth century American paintings in the auction include a New Orleans courtyard scene by Boston painter Abbott Fuller Graves, who visited and painted the Vieux Carre in 1927-28; an Art Nouveau scene of a woman in a lush garden by Fred Greene Carpenter; a New York City snow scene by Johann Berthelsen; a duck hunting scene by A.L. Ripley; two original works by illustrator F.C. Yohn; a pair of marine scenes by Joe Duncan Gleason; a Peter Max watercolor; and five works by Sterling Strauser (two still lifes, two nudes and an abstract).

Works on paper include a Renoir etching and a lithograph from the Vollard suite, a John Steuart Curry lithograph of John Brown, a Jackson Lee Nebitt etching titled Twelve Inch Mill Sheffield Steel Corporation, and an Anders Zorn etching, Dance at Gopsmor.

An outstanding selection of documents, maps and books is featured in this sale, including 730 ballots from the 1864 Lincoln/McClellan presidential race; a Southern lawsuit archive related to a 13-year-old slave infected with venereal disease by her owners; many Civil War photographs; an 1830s pocket map of Indian Territory in Mississippi; a Franklin Delano Roosevelt letter with good content; an original campaign illustration for Dwight D. Eisenhower (also signed by him); and documents signed by Sam Houston, Andrew Jackson, James K. Polk, Andrew Johnson, James Quincy Adams and Calvin Coolidge. There is also an unusual powder horn with President William Henry Harrison related carved ornamentation, including vignettes of him and the previous American presidents, dated 1841 (the year of Harrison’s death). Book lovers will want to check out a rare first edition of Lord Byron’s Hours of Idleness in a jeweled binding by Sangorski and Sutcliffe, complete with portrait miniatures of Byron and his home, Newstead Abbey, inlaid in the front and back covers. Also offered is a scrapbook archive containing letters from the author’s family and one signed by Byron himself – rare, since Byron died unexpectedly at the age of 36 – and a 19th century portrait of Charles Dickens after the one by Daniel Maclise in London’s National Portrait Gallery.

A rare pair of circa 1770 American sauce or butter boats by Lewis Fueter of New York stands out among more than 100 lots of silver. Southern coin silver flatware and hollowware, including an agricultural goblet, will be offered along with English sterling entrée dishes and a hunt-themed pitcher on stand, dozens of sets of sterling flatware and five sterling tea services. Leading the jewelry category is a collection of vintage men’s wristwatches including an 18K Rolex Oyster Perpetual and an 18K Piaget Imperador and an 18K Vacheron Constantin Patrimony. There are also some 50 additional lots of gold, gemstones and other fine jewelry items.

Asian material will be in good supply, with Chinese porcelains, jades and lacquered objects; woodblock prints; a Chinese silver bowl; and a 19th century silk dragon robe. An imposing Meiji screen inlaid with ivory and depicting a mountain and lake landscape, executed in fine silk embroidery, is featured along with several scrolls, including a 19th century watercolor and gilt silk scroll painting of Buddha and his attendants at Festival Time.

Southern pottery, a staple at Case, includes a rare stoneware double handled urn attributed to the Hedgecough pottery of Middle Tennessee; and an 1827 script-dated salt-glaze jar attributed Knoxville; a circa 1830 Staunton, Va., stoneware jar with cobalt tulip decoration; jars by N.H. Dixon of North Carolina, Henry Lowndes of Virginia and C.J. Becham of Georgia; miniature whiskey jugs; an Alabama sine wave jar; a Shearwater Pottery pelican; and face jugs by the Kennedy pottery of North Carolina and the Meaders family of Georgia.

Adding a musical element to the auction are two Regina music boxes (one an Orchestral model on stand with 21 discs), a Swiss music box attributed to Paillard and a 1964 Beatles NEMS record player, along with several antique violins and bows.

The auction also includes a noteworthy collection of Durand and other art glass including a Duffner and Kimberly “Bamboo” Mosaic lamp; porcelains including Meissen and some rare early Staffordshire and pearlware figures; two Tennessee needlework samplers; German and French fashion and character dolls; antique firearms and edged weapons, and a single-owner collection of early Walt Disney related items. 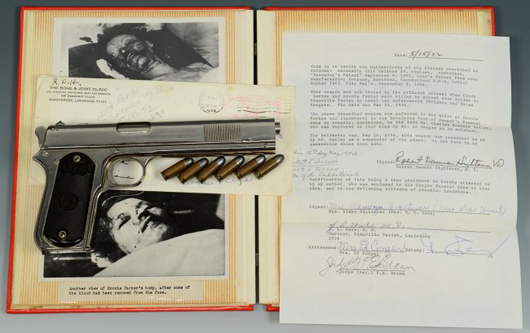 Outlaw Bonnie Parker never had time to pull this Colt .38 pistol before she and Clyde Barrow were ambushed. The gun, bullets and photo archive will be sold at Case’s Jan. 25 auction with a $125,000-175,000 estimate. Case Antiques image. 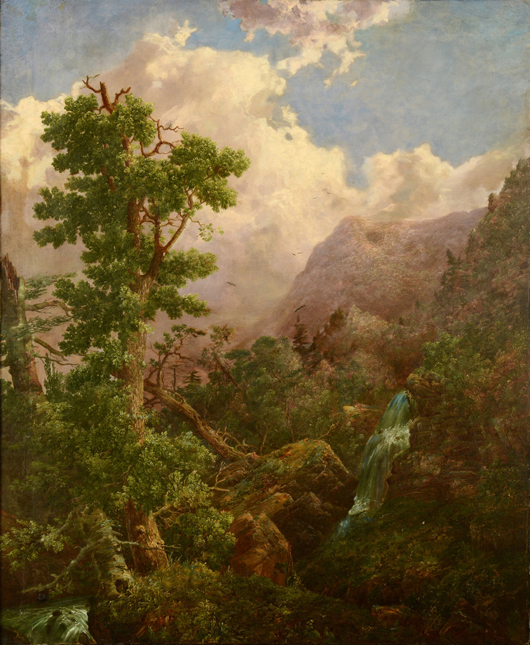 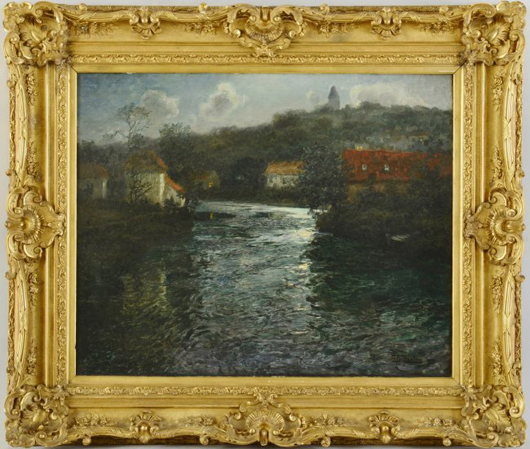 Once owned by the family of Gilded Age tycoon John ‘Bet-a-Million’ Gates, this oil on canvas painting of a moonlit canal by Fritz Thaulow, in original frame, is estimated at $30,000-$40,000. Case Antiques image. 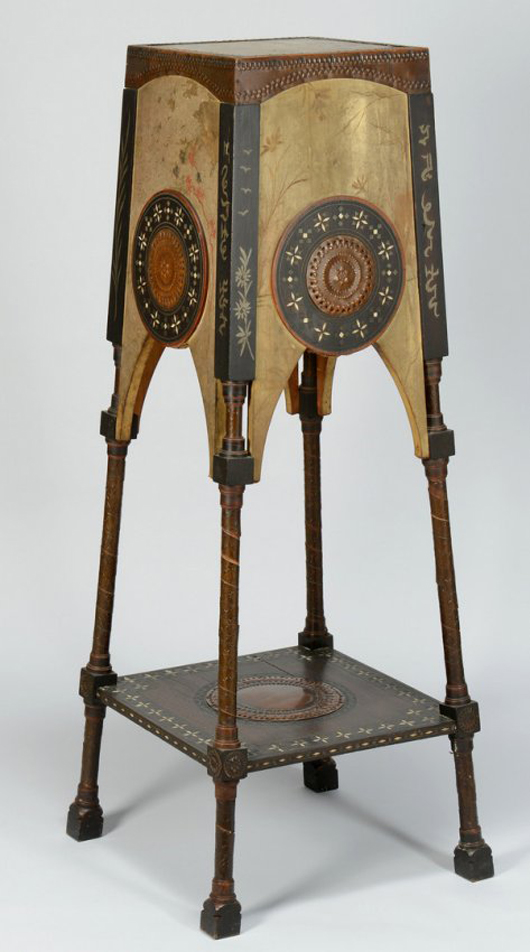 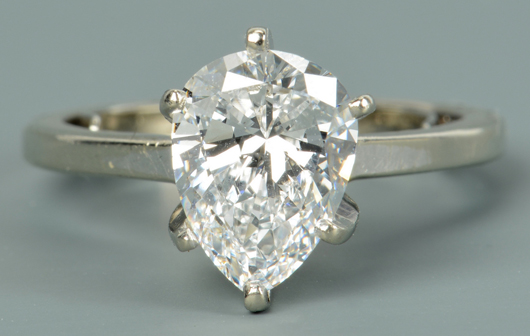 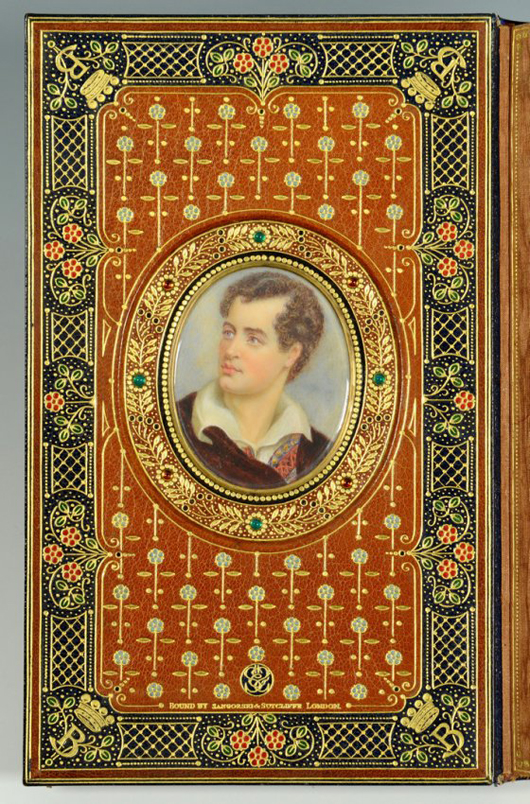 Clad in a jeweled binding by Sangorski and Sutcliffe, this 1807 edition of Lord Byron’s ‘Hours of Idleness’ is inset with miniature portraits of the author and his ancestral home. Estimate: $4,000-$5,000. Case Antiques image. 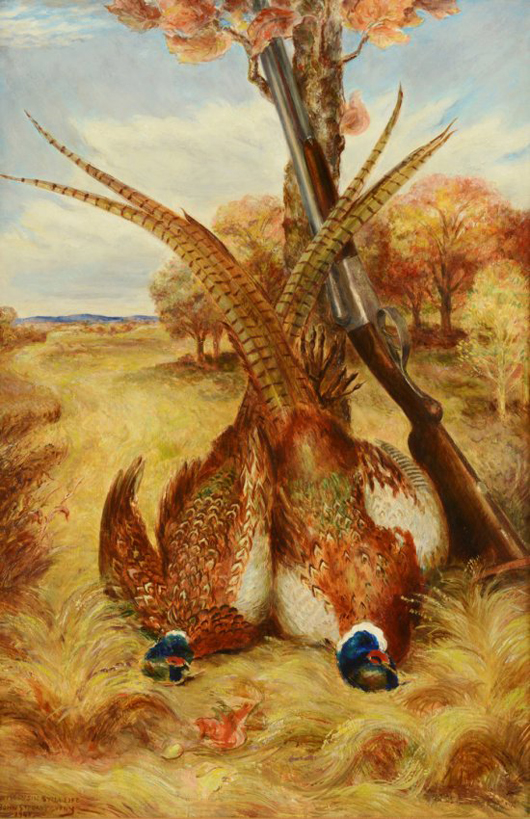 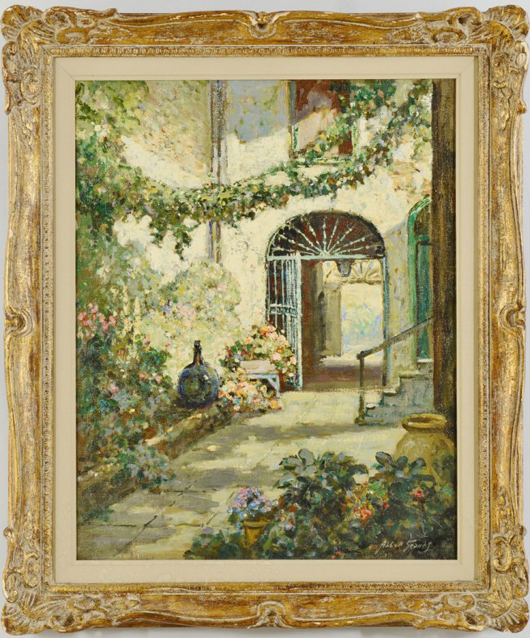