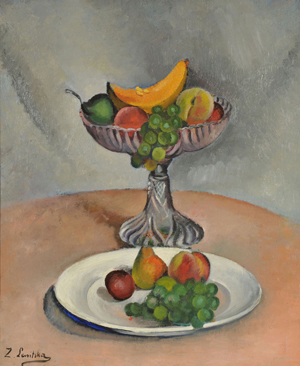 KNOXVILLE, Tenn. – From paintings that once hung in a museum to a Butch Cassidy “wanted” poster that once hung in a sheriff’s office, diversity is the theme at the Winter Case Antiques Auction, set for Saturday, Jan. 26, at the company’s gallery in Knoxville. LiveAuctioneers.com will provide Internet live bidding services during the sale.

Leading the fine art is an oil on canvas Paris streetscape by French painter Edouard Cortes (1882-1969), being deaccessioned by the Knoxville Museum of Art to benefit the acquisitions fund. The museum is also selling a large early 20th century Eugene Buccini painting titled Aurora, after the original by Baroque master Guido Reni. And Cheekwood Museum of Art in Nashville is selling an early 20th century portrait of a woman attributed to the school of Charles Hawthorne (Provincetown, Mass.). Two other highly anticipated artworks are a still life by Sonia Lewitska (Ukranian/Polish, 1882-1937), and the only known self-portrait in oil by Joseph Delaney (Tennessee/New York 1904-1991).

A pastoral landscape with sheep by James Wiley Wallace (Tennessee, 1852-1921) is the first painting by that artist to ever come up at auction – although he is well regarded, having exhibited no fewer than 16 works at the seminal 1910 Appalachian Exposition of Fine Arts – and a painting by George David Coulon (Louisiana,1822-1904) gives a rare 19th century glimpse of Fort Macomb, built to defend New Orleans following the War of 1812.

Two large estates, one from Oklahoma, the other from Mississippi, yielded longtime collections of cast-iron toys and banks, (such as Uncle Sam and William Tell), French and German dolls, early American lighting and hearth items, cobalt decorated stoneware, mochaware, spatterware, and holiday items including rare colored glass Christmas lanterns and Kugels. A highlight of the Mississippi estate was a collection of Meissen porcelain and English ceramics; more than two dozen lots of early toby jugs, pearlware and Staffordshire figures, ranging from common dogs to rare groups such as The Pugilists and Samson and the Lion, will cross the block.

A 4.90-carat oval diamond and platinum ring with baguettes on each side carries the highest estimate of any object in the sale, $35,000-$45,000. The ring was custom wrought and comes with GIA report. The four dozen jewelry lots also include an 18K-white gold necklace with 134 graduated diamonds, an Art Deco diamond and sapphire pendant, a fine 14K yellow gold Victorian tassel bracelet with black enamel decorated faux buckle clasp, and numerous other lots of gold and silver jewelry. An estate collection of signed costume jewelry that includes Miriam Haskell, Hattie Carnegie, Whiting and Davis and other desirable names will be sold as well.

The Historical and Civil War category in the Jan. 26 auction is especially strong. Featured is a rare “wanted” flier for Butch Cassidy and the Sundance Kid, offering a $2,000 reward for their part in a 1900 Nevada bank robbery, as well as a collection of other wanted posters from a Tennessee sheriff’s scrapbook. There is also a cache of 270 ballots from the 1864 presidential election from Civil War soldiers voting in the field. A variety of ballot designs are represented, the majority for the Lincoln-Johnson ticket as well as the McClellan-Pendleton ticket.

A scarce model 1855 Harper’s Ferry rifle with Maynard priming device and 1860 lockplate will be sold, along with Ames staff swords, one of which descended through the family of Capt. William Geary of Pennsylvania. Two Civil War ambrotypes of Confederate soldier F.M. Sconyers of the 59th Alabama Infantry Regiment plus a note with folk art drawing by him are being offered, as are a Confederate surgeon’s uniform star insignia, Mississippi infantry uniform buttons and a rare Confederate Bible published in Nashville and found in Kentucky at the Mill Springs battle site. An 1862 gilded copper Confederate seal medallion belonging to a lieutenant colonel who later became mayor of Chattanooga is expected to draw attention, along with several Kurz and Allison battle prints and two images of Robert E. Lee – one supposedly painted on tent canvas during the war, the other a rare 1870 print sold to help raise money for Lee’s memorial monument.

There are two outstanding examples of Schoolgirl needlework: a circa 1800 sampler from an important but as-yet unidentified Philadelphia school, distinguished by its figures wearing plumed hats, and a circa 1820 theorem painted on velvet, depicting a landscape with bell tower, river and figures in a boat. It was painted by Minerva French Boyd, the future mother of the founder of Louisiana State University, while a student at the Moravian College in Winston-Salem, N.C. There is also a linsey-woolsey sampler by Martha Peck, who was a ship captain’s daughter from Connecticut, and an archive relating to her family, and a sampler stitched by Elizabeth Fay Blake, the niece of cotton gin inventor Eli Whitney. The textile category also includes six other samplers, including a house sampler and one from New Baltimore, along with Southern quilts, and Oriental rugs including a semi-antique Manchester Kashan and a Serapi-style Isparta, deaccessioned by the Historic Belmont Mansion Association of Nashville, and a fine antique Tabriz.

The furniture category is led by two corner cupboards: one, a walnut broken-arch pediment example with ivory inlay that descended in the Nickels family of Scott County, Va., and the other a rare turkey-breast style corner cupboard. There are also some pieces from the personal collection of Nathan Harsh, co-author of The Art and Mystery of Tennessee Furniture, including a Tennessee cherry wardrobe and a pair of Kentucky banquet table ends in original surface. Two sugar chests, an Ohio or Kentucky tall-case clock, a Classical mahogany secretary and dressing table, and a blanket chest with original paint decoration will also cross the block, along with a Limbert rocker and some mid-century modern furniture including a Czech game table.

The catalog includes numerous lots of silver, including a coin silver water pitcher by Grosjean & Woodward, retailed in Charleston, S.C., and a Kentucky coin silver cup made by Garner and Winchester of Lexington. Also featured are English pieces by female silversmiths including Hester Bateman and Elizabeth Morley, as well as a set of 12 sterling knives made by Mary Chawner for Queen Adelaide of England in 1837, bearing her royal monogram. There are numerous American flatware sets by Tiffany, Reed & Barton, Gorham and Whiting. Sterling goblets, a George III sterling cake basket, and a 130-ounce Peruvian silver tea/coffee set will also be sold.

Other interesting lots in the sale include a collection of perfume bottles, figural glass animals by Lalique, and glass by Tiffany, Orrefors and Waterford, along with clocks, a French giltwood barometer, a firehouse presentation cane, garden antiques including a large cast-iron whippet, possibly by Fiske, and a “Souper Dress” after Andy Warhol (1928-1987). 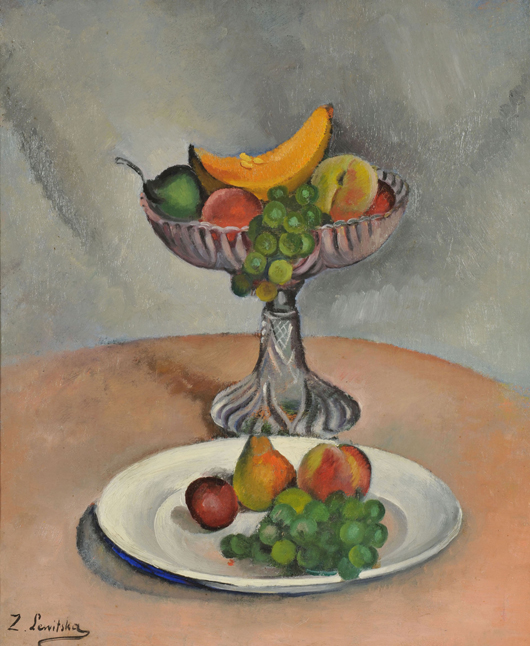 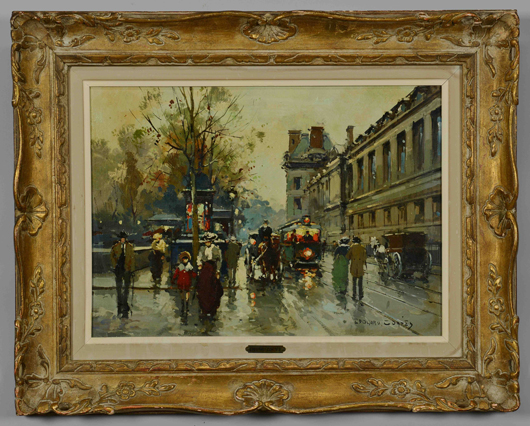 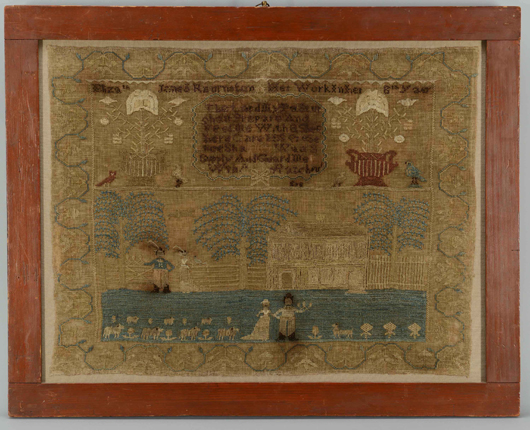 This circa 1800 sampler with figures in plumed hats, attributed to an unknown Philadelphia school, is one of nine samplers in the auction. Estimate: $5,000-$6,000. Case Antiques Auction image. 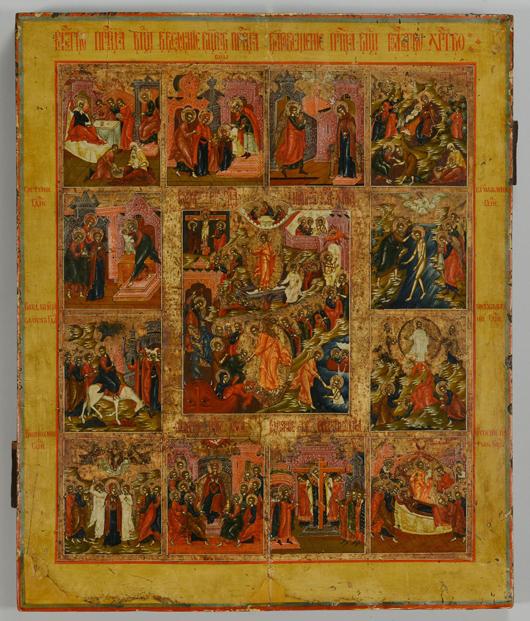 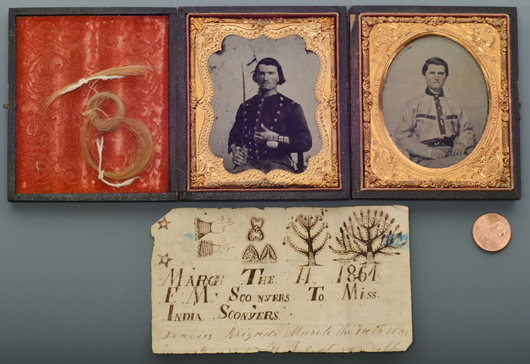 Among the many Civil War and historical related lots is this one containing two ambrotyes of Confederate soldier F.M. Sconyers of Alabama and a folk art drawing and partial letter by him. Estimate: $3,000-$4,000. Case Antiques Auction image. 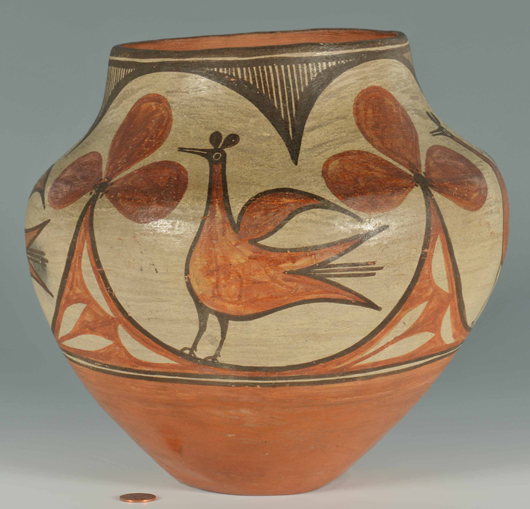 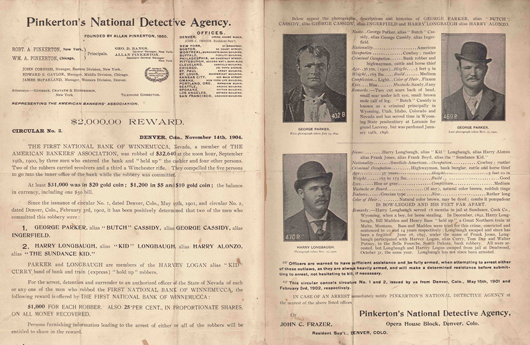