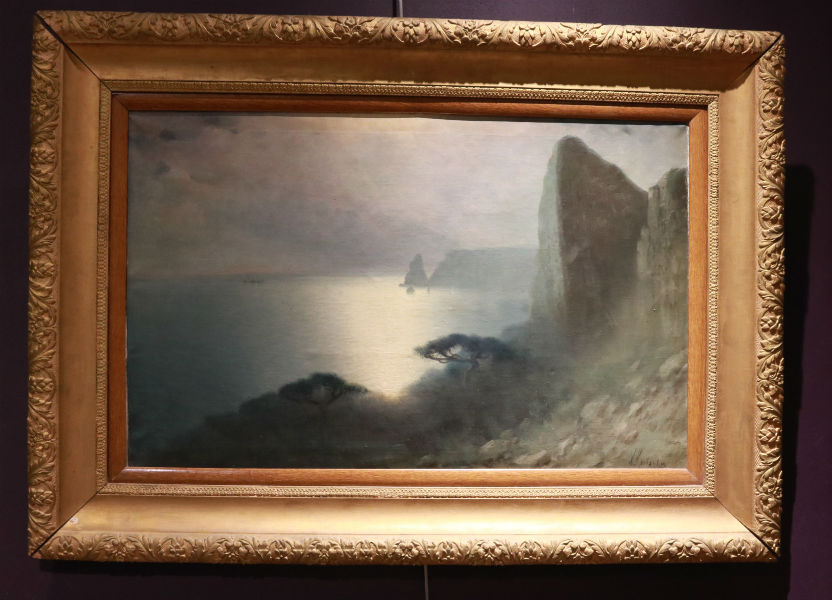 BLOOMFIELD, N.J. – Paintings by Russian artist Kharlampi Kostandi and Americans Reginald Marsh and Ogden Minton Pleissner, plus items from the collection of Academy Award-nominated actress Grayson Hall and her writer-husband Sam Hall will all come up for bid on Wednesday, Aug. 16, at Nye & Company Auctioneers’ Summer Estate Treasures Auction. Absentee and Internet live bidding is available through LiveAuctioneers.

“As a result of local estate liquidations, the August auction has some unexpected highlights,” said John Nye, president and principal auctioneer of Nye & Company Auctioneers. “They’re the type of strong lots usually associated with a fall sale. We anticipate international interest in the major paintings, both from the Internet and phone bidders.”

The oil on canvas painting by Russian Federation artist Kharlampi Kostandi, a moonlight seascape (above) measuring 24 inches by 30 inches, is a strong candidate for top lot of the auction, with a presale estimate of $40,000-$60,000. The work, artist signed, and has minor paint loss.

Reginald Marsh was an American painter who was born in Paris and is best known for his depictions of life in New York City in the 1920s and ’30s. His watercolor and ink rendering of tugboats at sea, titled Tugs, is signed and dated 1944 and should bring $8,000-$12,000. 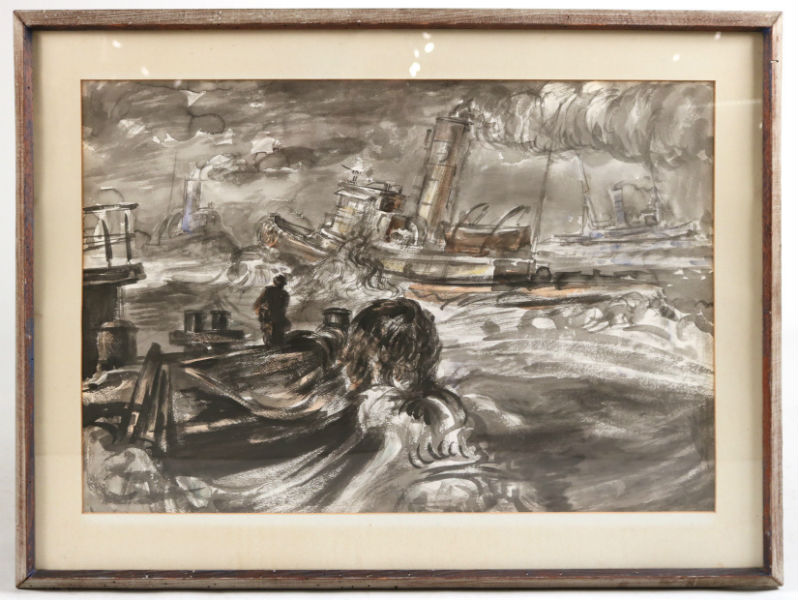 Ogden Minton Pleissner was an American painter specializing in landscapes and war art related to his service in World War II. But the watercolor depiction of homes in a bucolic countryside setting is anything but warlike. His signed painting, titled Avallon, is estimated at $2,000-$4,000. 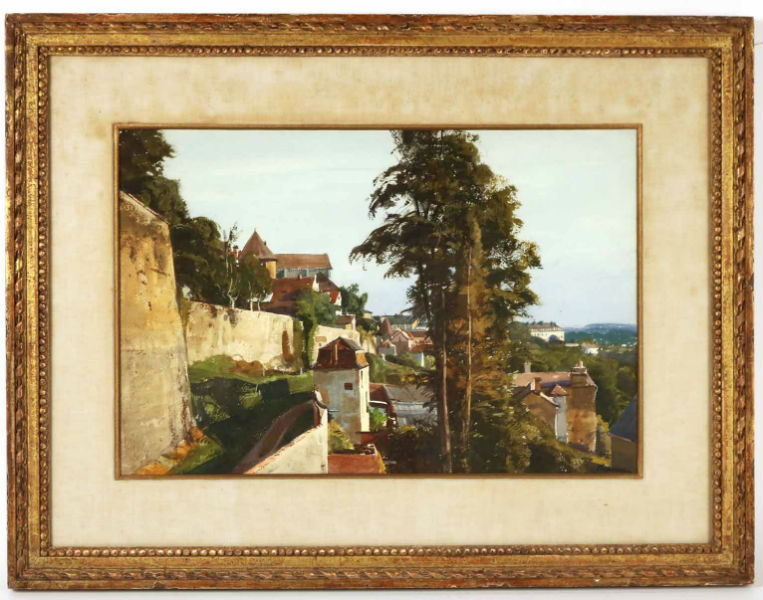 The items from the estate of Sam and Grayson Hall came out of the 1799 house the couple bought together on the Hudson River in Rhinebeck, N.Y. The home was a showplace, featured in the January 1983 issue of Architectural Digest. Many of its appointments are in the auction.

Grayson Hall (1925-1985) was nominated for an Academy Award for her performance in John Houston’s 1964 film Night of the Iguana. But she’s best remembered as Dr. Julia Hoffman, the doctor who fell in love with the vampire character Barnabas Collins on the cult classic soap, Dark Shadows. Sam Hall (1921-2014) was a writer on the show. He was also head writer for the soap opera One Life to Live.

The Mid-Century Modern furniture will feature tables by Gilbert Rohde (1894-1994) for Herman Miller. Rohde’s career as a furniture and industrial designer helped define American Modernism during its first phase, from the late 1920s to World War II. He is credited today for inaugurating Modern design at Herman Miller Inc.

Rohde’s tables in the sale include a Paldao coffee table (below) having a biomorphic top supported on one tapering leg and one curved support, both covered in tan, circa 1940 (est. $800-$1,200); and a 1940s Cloud occasional table with acacia burl, brass nailheads and vinyl wrapped wood legs. It is expected to bring $400-$600. 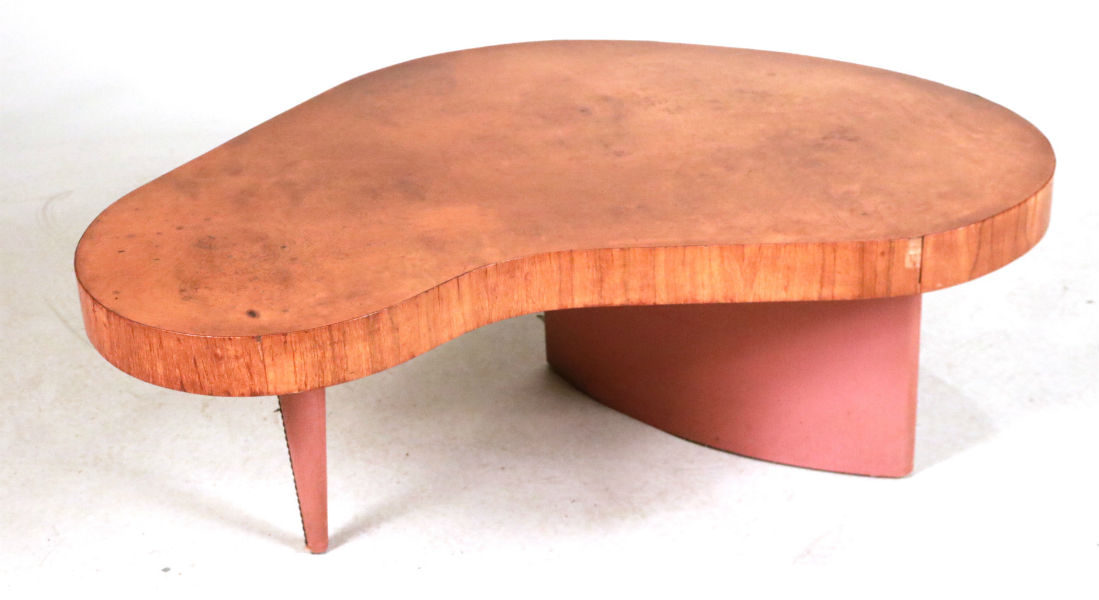 Additional furniture pieces in the sale will include a Dutch Baroque-style inlaid chest of drawers with mirror, produced in the late 19th or early 20th century, with four drawers on bun feet (est. $800-$1,200); and a figural steel bistro set consisting of two “he-she” barstools and a table, designed by Fred Garbotz and manufactured by Rockledge Design Studios (est. $500-$700). 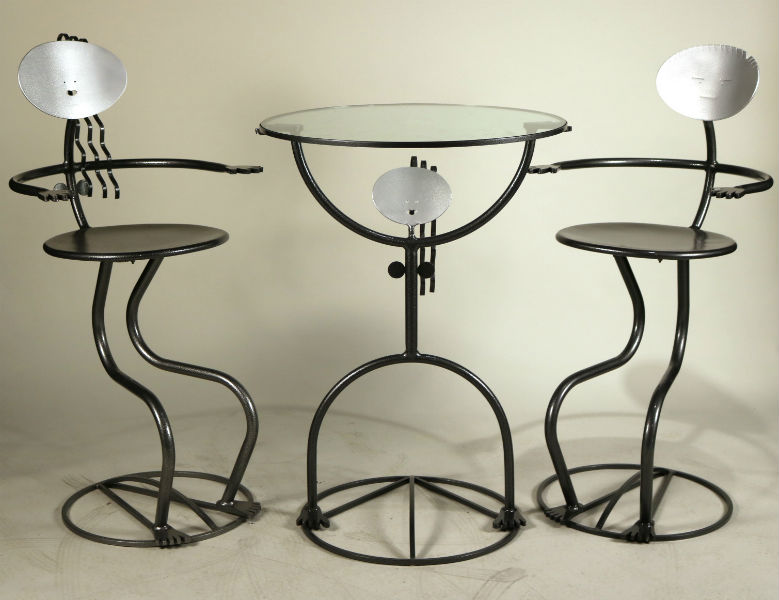 John Nye had a long and fruitful career at Sotheby’s before he and his wife, Kathleen, acquired Dawson’s in 2003 and started Dawson & Nye. With the move to Bloomfield seven years later, they renamed the business to Nye & Company (Auctioneers, Appraisers, Antiques). The firm is nationwide, but the bulk of the business comes from trusts and estates in the tri-state area.

The sale will begin at 10 a.m. Eastern time.