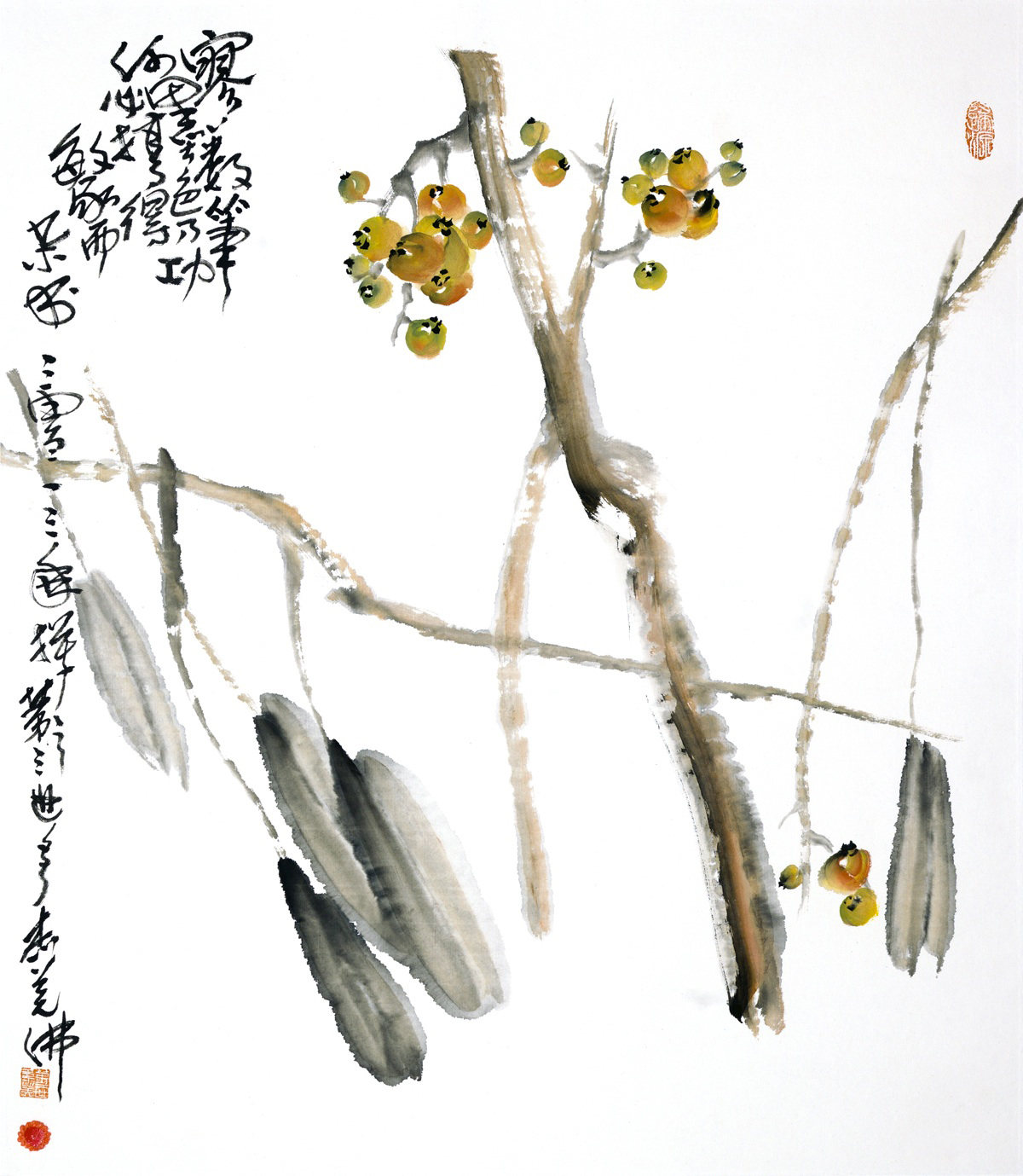 NEW YORK – The splendor of China’s heritage is again the focus of the exceptionally strong collections of classical and modern paintings and dynastic works of art set for auction on Sept. 12 at Gianguan Auctions. LiveAuctioneers.com will provide absentee and Internet live bidding.

The symbolism that underlies every facet of Chinese culture and Buddhist art is front and center. The elevation of scholarship is apparent in the craftsmanship displayed in items as varied a carved jades, antique ceramics, jewelry and teapots.

A collection of multimillion dollar scroll paintings underscores the leadership position accorded Gianguan Auctions in this area. Among the upper tier highlights is Lot 105, The Steed and Groom, by Zhao Mengfu (1254-1322). A prince and descendant of the royal family, Zhao Mengfu broke from tradition to explore the layering of grounds at various heights to create depth. In this ink on a stone-black stallion with one red tether is matched with a lone handler framed within rocky outcroppings. The estimate is $10 million to $15 million. 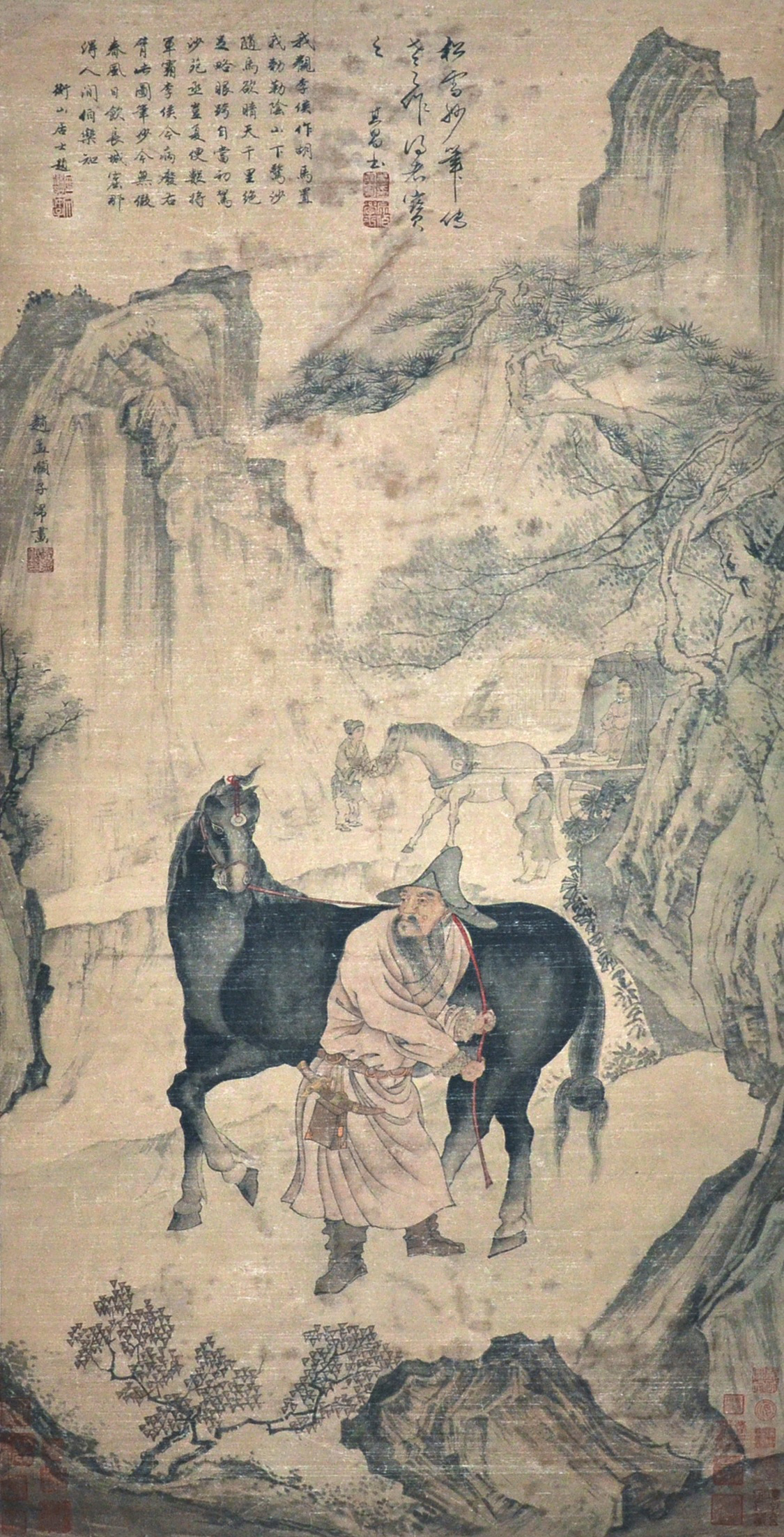 The contemporary Buddhist art highlight is H.H. Dorji Chang Buddha III’s 2013 Loquat. The artist has honed in on an ascending branch laden with fruit. Deft strokes give it an airy elegance. The ink on paper painting carries the bell seal of Dorje Chang Buddha III and a three-dimensional finger print Gui Yuan. It is priced at $9 million.

Buddhist treasures again beckon with Lot 253, a rare painted clay-coated linen figure of Guanyin. It is defined as “bodiless” because all that remains is lacquer coated linen, the result of a technique that requires dissolving the clay in water and removing it. The seated figure is draped in robes and has an overall rich-red lacquer cast. 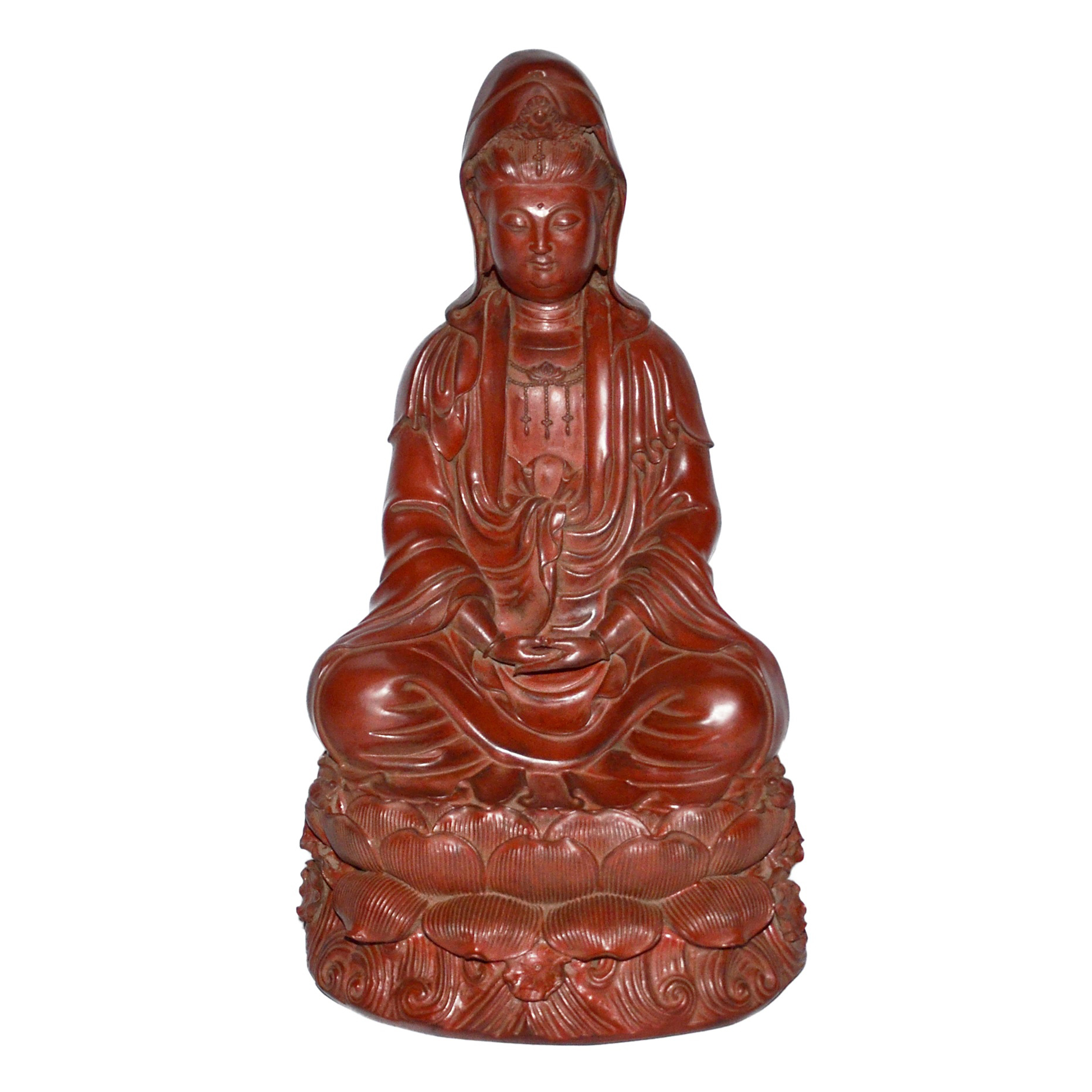 This tall statue of Guanyin is of starched linen, hollow in the center where molded clay was extracted. Coated with lacquer, it is a masterpiece of technique. Estimate: $8,000 – $15,000. Gianguan Auctions image

The marquee carved jade item is Lot 233, a Mughal-style bowl. Translucent and rising from a short foot to a slightly flared rim, the exterior is carved in low relief with ruyi trefoils, acanthus-leaf scrolls and meandering blossoms skirted by petal lappets.

The powerful dragon makes a dramatic appearance at Lot 167 in a set of nine chasing flaming pearls across the bodies of a massive pair of egg-yellow Meiping. The dragons are amid flaming clouds and flame motifs encircled by ruyi. Inscribed with the Ming Dynasty Kangzi six-character mark, and of the period, the vases are estimated at $30,000-$40,000. 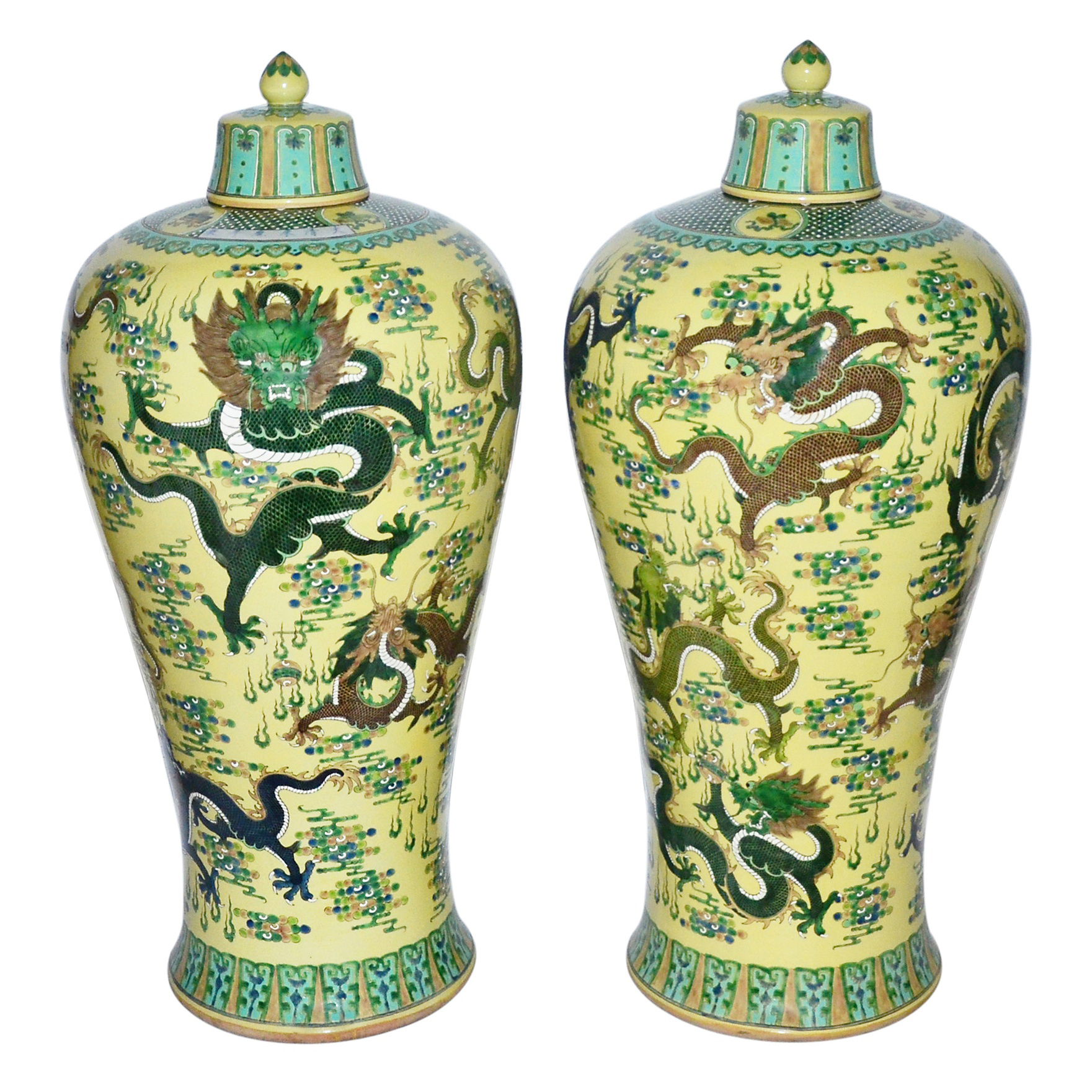 An egg-yellow ground is the field upon which nine green and aubergine dragons chase on a pair of Meiping. Of the Ming Dynasty, each carries the Kangzi six-character mark. Estimate: $30,000-$40,000. Gianguan Auctions image

Representative of the scholar’s quest is Lot 270, a rare Ji-Yun tortoiseshell box. Its interior is fitted with a shallow upper tray that slides. Of the Qing Dynasty, the box bears the Jiaping four-character mark. 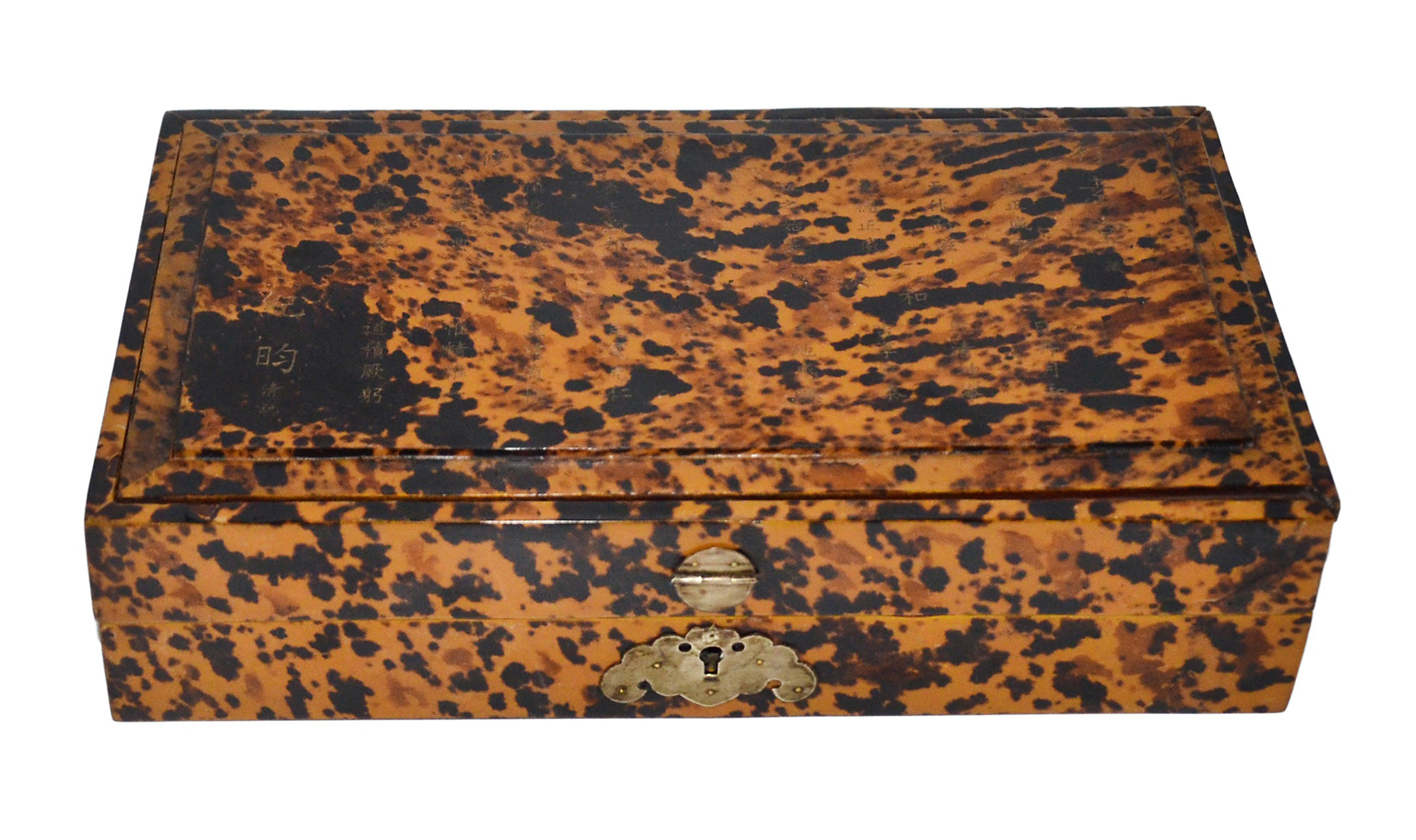 A rectangular Ji-Yun tortoiseshell box of the Qing Dynasty with poem inscribed in gilt on the top. It has a Jiaping four-character mark. Estimate: $5,000-$8,000. Gianguan Auctions image

The auction will be conducted live at the gallery, 295 Madison Ave. For details and condition reports call 212-226-2660.