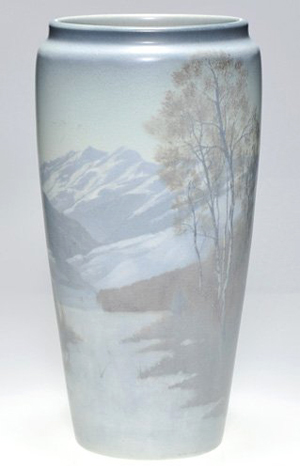 CINCINNATI – For the 19th year Cincinnati Art Galleries will host its popular auction of American and European ceramics, art glass and Cincinnati’s own Rookwood Pottery, June 6-7. The Rookwood XIX-Keramics 2009-Art Glass 2009 jubilee will be held at their downtown Cincinnati facility. LiveAuctioneers.com will provide Internet live bidding.

The Keramics portion begins Saturday, June 6 at 10 a.m., the Art Glass on Saturday afternoon at 4 p.m. and the Rookwood will begin selling Sunday at 10 a.m.

Saturday morning commences with American Art Pottery. Some of the interesting and diverse works include a Weller Second Line Dickensware 11 5/8-inch vase depicting a shepherd guiding his flock, the co-effort of Anthony Dunlavy and Helen Smith, which is estimated at $1000-$1500.

Striking and rare is a 7-inch Weller Minerva vase with oak leaves and acorns in orange on a brown mat ground. It has a $2,000-$2,500 estimate.

There is a good group of Weller Hudson items present, including some scenics and some large examples. A particular favorite is an 8 1/2-inch Hudson that was decorated by Mae Timberlake, who festooned several trees with colorful Chinese lanterns hanging from the branches ($4,000-$5,000).

A large Cambridge Art Pottery vase dating from about 1901 features the portrait of a Native American, skillfully presented by Arthur Williams. Standing 23 1/2 inches tall, it is estimated at $4,000-$6,000.

Among the Newcomb College representatives is a Southern landscape by Anna Frances Simpson, 1914, estimated to sell between $3,000 and $4,000.

Also seldom seen is a Walley Pottery vase with tooled leaves, covered in a green and brown gloss glaze ($3,000-$3,500). Two Merrimac Pottery vases will be sold, including one with modeled plants and covered with a rich, green glaze ($800-$1,000) and a 5-inch vase with a purple and gray crackle luster glaze, which is estimated at $1,500-$2,000. A petite Robineau vase covered with a green crystalline high glaze is estimated at $400-$600. A rare Tiffany Pottery vase with copper cladding is expected to bring between $10,000 and $13,000.

An appealing selection of European ceramics has been assembled, including two Wedgwood Fairyland Luster bowls. The larger, in octagonal form, depicts castle scenes with creatures on each of the eight panels with the interior done with an odd landscape with butterflies, birds, a large bug and fairies ($2,000-$3,000). The smaller version features a lot of fairies cavorting beneath a starry sky on the exterior and a floral border encompassing bats, birds and fairies while a couple of pixies visit ($700-$900). A large Royal Doulton Flambé vase, in rich red and black with nice veining and standing 16 5/8 inches tall, seems reasonable with a $500-$700 estimate.

A 21 1/4-inch vase by Delphin Massier shows a winged fairy wrapped around a flaring vase enhanced with irises and cattails. The intricate design is covered in lovely pastel mat glazes and it is in remarkably fine condition ($3,000-$4,000).

In the art glass arena, a good Tiffany bronze floor lamp, the base with a lotus design and the 10-inch ribbed shade combed with gold over the opal surface carries a $6,000-$8,000 estimate. A Rene’ Lalique Hirondelles clock, illustrated in their 1932 catalog, is also beguiling and is estimated at $1,500-$2,000.

On Sunday morning the gallery will begin to fill for the Rookwood Pottery portion of the auction, which always evinces a lot of interest due to its Cincinnati origin. In fact, the old Rookwood Pottery facility can be seen from the auction site, perched on top of Mount Adams.

Sara Sax, one of the more proficient artisans created a Dark Iris Glaze vase with shaded tan maple leaves against a brown background which is expected to fetch $2,500-$3,500.

Kataro Shirayamadani’s career at Rookwood spanned 60 years and he is acknowledged by many as having no superior. He decorated a Standard Glaze scenic vase depicting an American Indian squaw in the foreground with teepees behind her and the plains on the horizon. The vase is amazing both for the rarity of this type of decoration and the skill with which the vignette was accomplished. The vase is estimated at $20,000-$25,000.

Lorinda Epply surrounded a 17-inch vase with red hollyhocks, which was then covered with the Vellum Glaze. Estimated at $4000-$6000, it is without crazing and is very striking. Sallie Coyne graced an 8 1/2-inch Iris Glaze with the portrayal of two rooks in flight. A popular, if not often seen subject, it is estimated to bring between $4,000 and $5,000.

Rookwood created very little in the way of “site specific” works, but a couple of exceptions will be crossing the block. One is a large and impressive Vellum Glaze plaque with an expansive view of a California landscape, which shows tall mountains in the background and trees and flowers in the foreground, the work of Carl Schmidt in 1916. In its original frame, an old label from Rookwood reads “California Mountains, C. Schmidt.” Another Carl Schmidt work is a 15-inch-tall Scenic Vellum vase depicting a snow-covered terrain in the Canadian Rocky Mountains, in the Calgary area, and that location is impressed on the bottom. It is estimated at $15,000-$20,000.

E.T. Hurley was another Rookwood artisan who was very skillful in several areas. One of his works is a Sea Green vase, which he decorated with a trio of catfish in 1904. Depictions of fish and animals were a particular forte of his, and the use of the Sea Green glaze is a pleasant, complementary addition ($3,000-$4,000).

For the growing number of Rookwood figural fans, there will be a nice complement of choices. A few of the highlights will be a pair of frog bookends glazed in a good mat green crystalline glaze ($1000-$1500) and a Locust wall pocket, designed by Shirayamadani ($700-$900). Very unusual is a pair of catfish candleholders, difficult to find in any case, but decorated and signed by Lorinda Epply and then covered with the Aventurine Glaze ($1,000-$1,500). Perhaps the penultimate figural is that of a 10 1/4-inch blue jay perched on a magnolia branch, designed by Arthur Conant and decorated by Lorinda Epply. This is part of 30 some pieces made during the depths of the depression for the family of one of Rookwood’s benefactors in 1934. This is the first time this shape has ever been offered for sale and it carries a $2,000-$3,000 estimate.

A handsome, full-color catalog, individually picturing every lot, will be available in May, priced at $45 plus $5 shipping (Ohio residents please add $2.93 sales tax). In addition to in-person bidding, absentee bidding services, telephone lines for lots with a low estimate of at least $500 will be available. To order the catalog or for details phone (513) 381-2128.

View the fully illustrated catalog and register to bid live via the Internet by logging on to www.LiveAuctioneers.com. 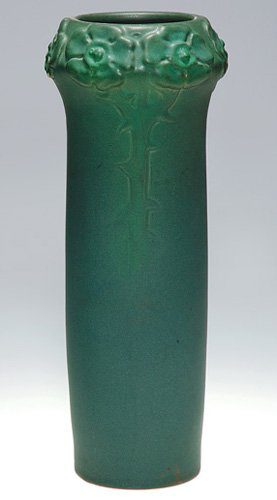 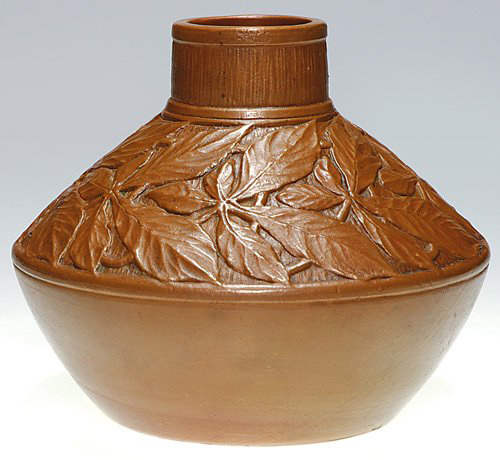 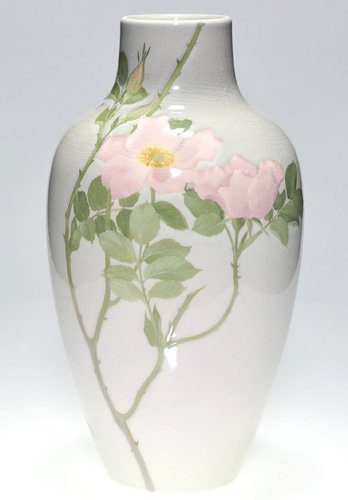 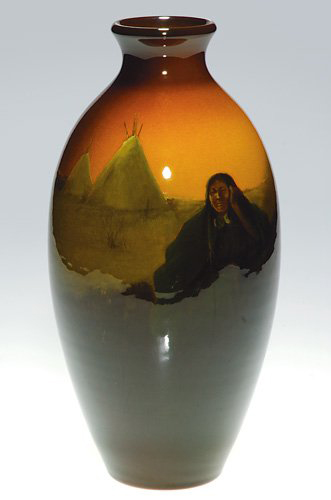 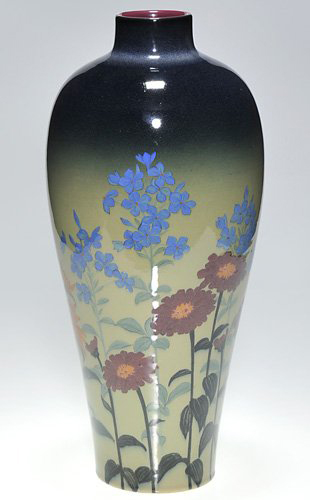 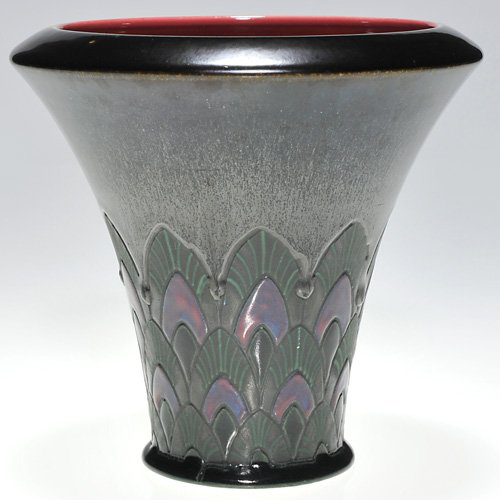