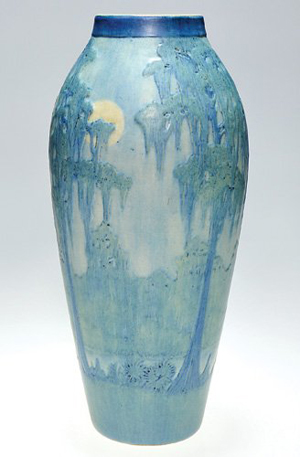 Newcomb artist Anna Frances Simpson painted a full moon shining through a bough of a cypress tree on this 13 7/8-inch-tall vase. Dated in code for 1918, the vase has an $8,000-$10,000 estimate. Image courtesy Cincinnati Art Galleries.

Saturday morning commences with American art pottery. A rare Weller red Louwelsa 10-inch vase decorated with woodbine by Hester Pillsbury is estimated to bring $1,500-$2,000. Also scarce is a 12 1/8-inch blue Louwelsa vase decorated by Frank Ferrell, who graced the vessel with red poppy decoration, the color of the flower really standing out. Another blue Louwelsa example features crisply defined nasturtiums. Both are estimated to sell in the $1,200-$1,700 range.

Several pieces of decorated Marblehead Pottery will be offered, including a vase with hand-painted blue, gray and brown flowers on stalks, which is estimated at $2,000-$2,500, and one with a band of stylized flowering vines in black slip against a blue ground, estimated at $2,000-$3,000.

Very striking is a tall and regal Roycroft American Beauty vase made for the Grove Park Inn in Asheville, N.C. The 22 3/8-inch vessel has been professionally repatinated and carries an estimate of $2,000-$3,000.

A small but special group produced at Newcomb College will be offered, including an 8 5/8-inch high-glaze vase with carved and painted stylized passion flowers, the work of Cynthia Littlejohn in 1904. The flowers and leaves are outlined in blue and the color and composition are strong. The estimate is $10,000-$12,000. Another is a monumental scenic vase carved and painted in 1912 by Sadie Irvine. Pictured are tall palm trees done in mat blues and greens with tan highlights where the buff clay peeks through. The 16 1/4-inch vase is estimated at $13,000-$15,000.

European and Asian ceramics will follow. A rare KPM porcelain vase provides a repeating scene of house and barn surrounded by trees with bright yellow lights shining through the windows of the house. At 15 1/4 inches tall it is quite large and is estimated at $2,000-$2,500. A spectacular Zsolnay vase, which shows classical buildings and a small sailing ship in a fantasy landscape beneath a crescent moon, has a $3,500-$4,500 estimate.

Saturday afternoon, art glass and other desirable objects will move to the forefront. Tiffany Studios is represented with some fine examples. An early gem is a 3 3/4-inch vase decorated with iridescent gold and emerald green swirled over the surface and marked with the TGC (for Tiffany Glass Co.) logo has a $3,000-$5,000 estimate. A good Tiffany flowerform vase, 12 inches high, was created from an intense blue glass and bearing green foliage. It is estimated at $3,000-$5,000. Estimated at $4,000-$6,000, a Tiffany freeform vase displays a continuous band of connecting loops and a succession of waves against the citron body.

A beautiful Steuben Plum Jade vase, double acid cut in the Canton design, has a definite Asian flair and is estimated to bring between $2,500 and $3,500.

An impressive Mount Washington Glass Co. Colonial Ware vase with dolphin handles carries a hand-painted Venetian scene of a young lady approaching a gondola at the end of a pier and is estimated at $4,000-$5,000.

Sunday morning the chairs will begin to fill for the Rookwood Pottery portion of the auction, which always evinces a lot of interest due to its Cincinnati origin.

The Rookwood vessel gracing the cover of the sale catalog is a 12 3/4-inch Sea Green Glaze vase, decorated by Matt Daly in 1900. The artwork consists of grapes, leaves and vine, all outlined in black, with a dramatic effect, and covered with the desirable glaze, which displays a bit of a peach blush. The spectacular vase is predicted to sell for between $15,000 and $20,000.

A rare and important Aerial Blue vase in Dull Finish depicts a young woman walking through a forest with a tiger at her side, the work of Sallie Toohey in 1895. The clay body is blue and all of the decoration is done in shades of white, creating a vivid effect. It is estimated to sell for $12,000 to $15,000.

A charming Black Iris vase, decorated by Sara Sax in 1906, with red poppies encircling the vase with three sets of stems emanating from the bottom. Uncrazed and with strong color and composition, its estimate is $2,500-$3,500.

Lorinda Epply decorated a 10 1/2-inch vase with colorful daffodils, the vase then being covered with the Black Opal Glaze while the interior is lined with an attractive mottled brown and green glaze. Estimated between $1,750 and $2,250, it is very crisply done and in appealing colors.

A porcelain harbor scene, painted on a vase by Carl Schmidt in his classic photorealistic style, exhibits his wonderfully detailed work. Carrying a $3,000-$4,000 estimate, this one is unusual as it has been covered with a lightly tinted blue glaze, which subtly enhances the scene. Another porcelain vase depicts a landscape with exotic plants and flowers and a single bluebird in flight, the work of Arthur Conant in 1921. This fantastic vase is estimated at $6,000-$8,000.

In the production area, there is a rare set of Hebrew Union College bookends estimated at $1,500-$2,000, as well as Large Rooks and Hippo bookends.

Cincinnati Art Galleries, 225 E. Sixth St. in downtown Cincinnati, will be open for previewing until 8 p.m. on Friday, Nov. 6. 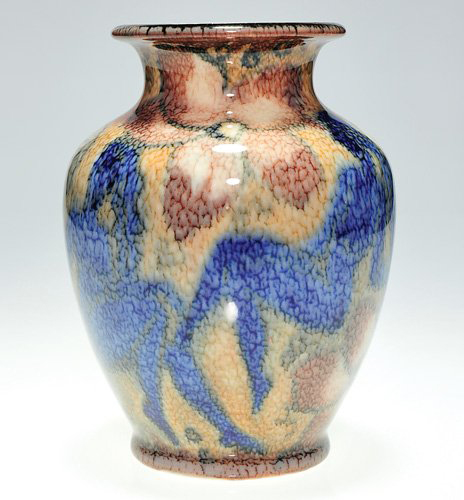 Thee languid blue nudes are interspersed around this Rookwood vase by Jens Jensen, which is dated 1933. The 6 5/8-inch vase has a $7,500-$9,500 estimate. Image courtesy Cincinnati Art Galleries. 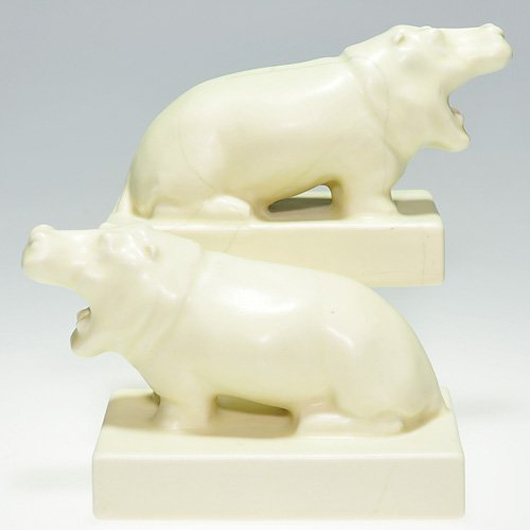 Cast in 1933 and covered with Ivory Mat Glaze, these Rookwood Hippopotamus bookends are scarce. Designed by Arthur Conant, the pair has a conservative $400-$600 estimate. Image courtesy of Cincinnati Art Galleries. 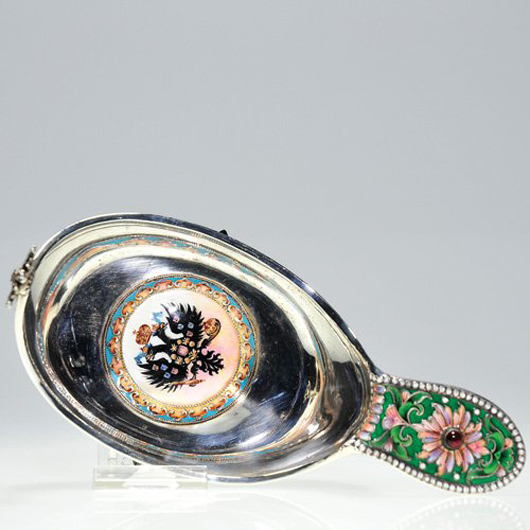 Estimated at $15,000-$20,000 is a silver and enamel Russian kovsh bearing the Romanov eagle and a crowned Imperial Eagle. It is 2 inches wide by 7 inches long. Image courtesy of Cincinnati Art Galleries. 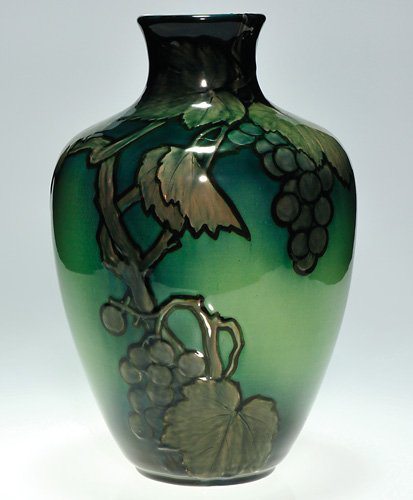 Rookwood artist Matt Daly used the Sea Green Glaze to highlight his design of grapes, grape leaves and vines on this 12 3/4-inch vase done in 1900. The estimate is $15,000-$20,000. Image courtesy of Cincinnati Art Galleries.