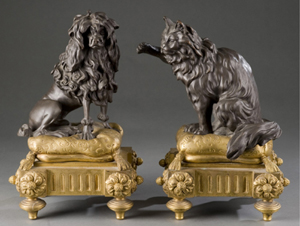 FALLS CHURCH, Va. – On June 9, Washington, D.C.-area estate specialists Quinn’s will present at auction — with Internet live bidding through LiveAuctioneers.com — an outstanding selection of fine and decorative art with an international flavor. Most of the articles to be sold are of exceptional quality and have come from Mid-Atlantic estates and residences.

American art is led by a Hale Aspacio Woodruff (1900-1980) oil-on-canvas landscape, a painting considered important not only on the basis of its own aesthetic merit but also because of the artist’s distinguished history. Woodruff played an instrumental role in the development of African-American art, both as an artist and art educator. In 1931, following a five-year period spent studying and traveling in France, Woodruff joined the art faculty at Atlanta University. He subsequently served as an art instructor at NYU, eventually retiring with the title of professor emeritus. Throughout his career, Woodruff was an active and influential artist and teacher who furthered recognition of African-American art while winning numerous prestigious awards.


Having both a Native-American and equine theme, William S. Seltzer’s (California/Montana, b. 1955-) signed oil-on-canvas depiction of an American Indian on horseback will be offered with a $1,500-$2,500 estimate. It is one of four artworks by the noted Western artist that will be up for bid on June 9 at Quinn’s.

Already attracting interest from folk art aficionados, an American cast-iron horse-form weathervane dates to around 1870 and is attributed to the Rochester Ironworks in Rochester, New Hampshire. The 36-inch-long vane depicting a high-stepper with plumed tail was previously held in a private collection. It is conservatively estimated at $10,000-$15,000.


From the estate of a Virginia family comes a handsome mid-19th-century American corner cabinet of tiger maple with poplar secondary woods. Beautifully crafted, it carries an auction estimate of $2,000-$3,000.


Decorative-art adornments include a quartet of late-18th-century Italian giltwood mirrors carved in the late Baroque style. The mirrors were previously part of a private collection and have been entered in the auction with an estimate of $8,000-$10,000.


Another lot that would add grace and elegance to any home is the pair of Louis XVI-style ormolu and patinated-bronze chenets. The 19th-century figures exhibit a high standard of artistry and are modeled as a poodle and cat resting on tasseled cushions. Estimate: $4,000-$6,000.


Superior-quality carving is showcased in a French prisoner of war model ship replicating the “Achilles.” The intricately detailed 18-inch-long model dates to the first half of the 19th century and could sail to a $3,000-$5,000 destination at auction.


More than 60 Chinese snuff bottles from the collection of Southern Californian John W. Sinclair add delicacy and fine artistry to the sale. It is the third and final grouping from the collection to be offered at Quinn’s and is highlighted by a Daoguang porcelain bottle with enamel crickets. The circa 1821-1850 bottle has a rounded-square form, green jadeite stopper and a 4-character seal script reign mark on the bottom.


Quinn’s vice president Matthew Quinn said that snuff bottles from the Sinclair collection had drawn widespread interest in sales held last March and in December of 2011. “The bottles are from an old and prestigious collection, which is exactly what buyers are going for these days in many different categories,” he said.


Those who collect high-quality art and furnishings usually follow that same approach with other items they purchase, either for their homes or themselves, Quinn said. “That’s why jewelry buyers watch our sales very carefully. They know good things come out of Washington-area jewelry boxes.”


A perfect example of just such a piece of jewelry is a chic Italian 18K gold bracelet set with sapphires and rubies. Having a total weight of 2.66 ozt, it is entered in the June 9 sale with a $5,000-$6,000 estimate. 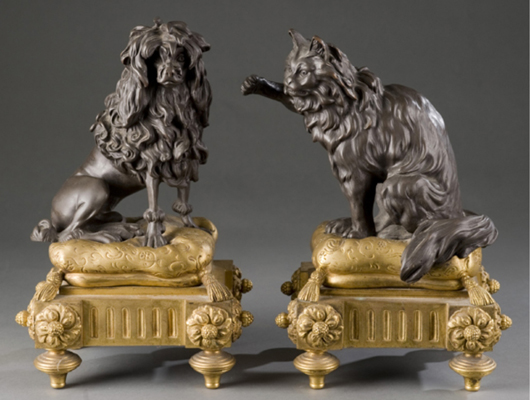 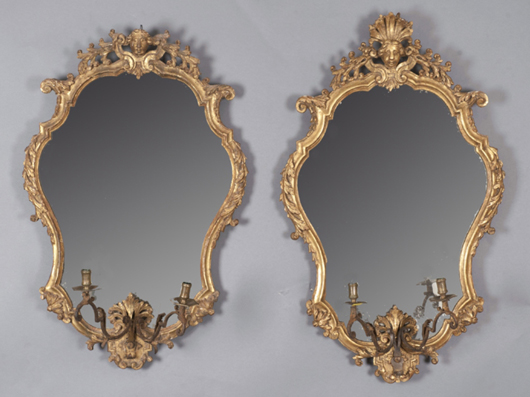 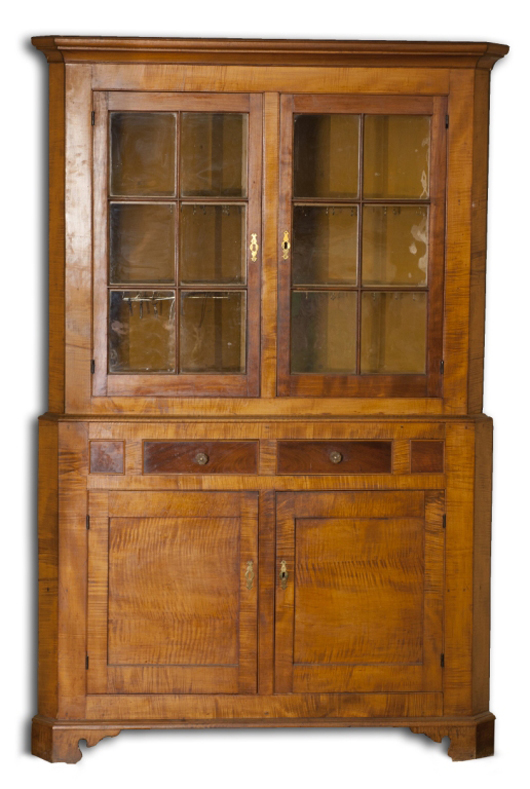 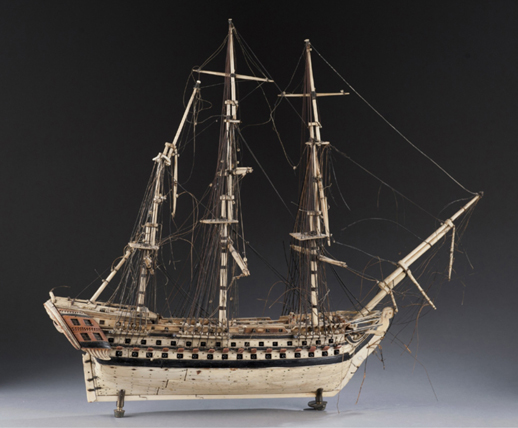 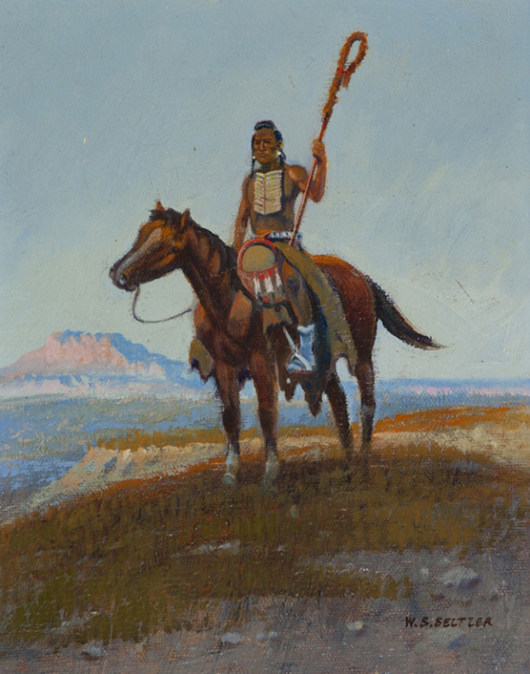 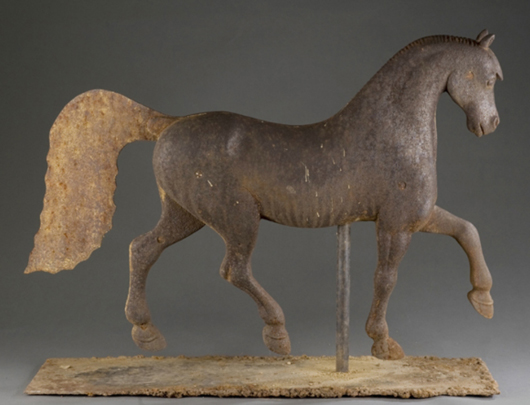 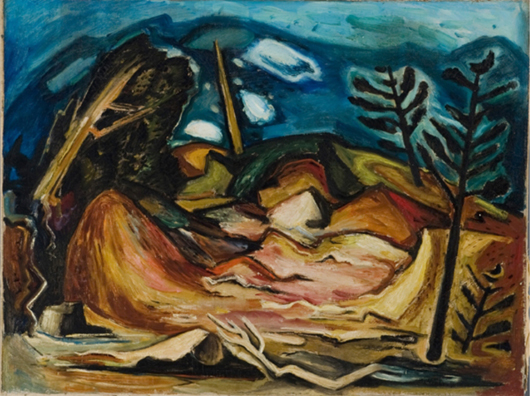 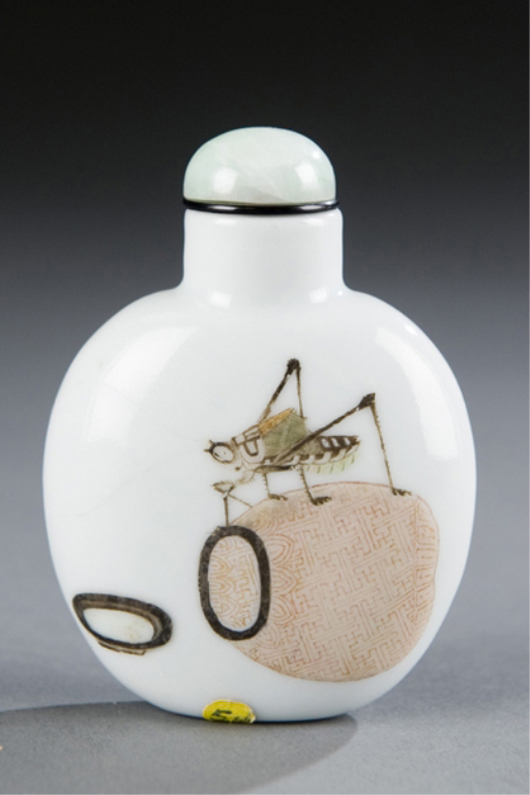 Circa 1821-1850 Chinese Daoguang porcelain snuff bottle with enamel crickets, one of more than 60 snuff bottles consigned from the collection of John W. Sinclair. Quinn’s image.