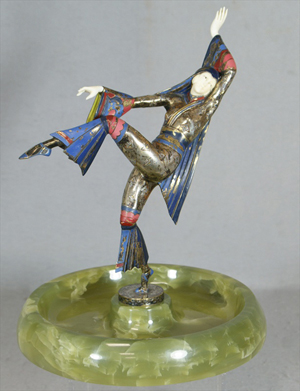 CHADDS FORD, Pa. – A virtual automotive time capsule – from an early Pierce-Arrow to a trendy 1970 Chevy El Camino – will cross the auction block at William H. Bunch’s suburban Philadelphia gallery on Tuesday, Oct. 4, with Internet live bidding through LiveAuctioneers.com. The prized collection of vintage cars and trucks was amassed over many years by Pennsylvania businessman Dorando Faggioli, now 78, who made it his personal mission to restore each vehicle to perfection.

Faggioli considers his 1926 Pierce-Arrow Model 80 “New York” car to be the jewel of the collection. “In its day, the Pierce-Arrow was the most expensive car made in this country,” Faggioli said. Everything about Faggioli’s Pierce-Arrow is deluxe; down to the special storage area for golf clubs. Purchased in the 1980s, the car won a national first place at the AACA Show in Hershey, Pa., and has plaque on the radiator to prove it.

Faggioli’s sleek 1976 Cadillac Milan convertible derives its name from the fact that it was a Seville 4-door sedan converted to a 2-door roadster per a design originated by Milan Coach Builders Inc., of Simi Valley, Calif. The number of surviving Cadillac Milans is not known. “What we do know is that Milans are rarely seen nowadays,” said auctioneer William Bunch.

The collection’s 1930 Model A station wagon was purchased for nostalgic reasons, Faggioli said. Not only did it remind him of the vehicle in which he learned to drive, it also brought back boyhood memories of accompanying his father – a landscaper – to a weekly job in posh Radnor, Pa. Faggioli recalled: “While dad did his landscaping work, I would meet with the little girl who lived in the big estate across the street. She knew we would be coming every Monday and would wait for me. We’d talk and pass the time. Her name was Grace Kelly – yes, the Grace Kelly.”

The nearly 500-lot auction is laden with fine estate jewelry. A 50-piece collection from a Wilmington, Del., estate contains a stunning assortment of Victorian Etruscan yellow gold jewelry, some adorned with diamonds or seed pearls. A slide bracelet approximately 1 inch wide with niello ornamentation is a key lot, as are several brooches. An exceptional brooch is centered with a 28mm by 20mm amethyst whose “table” displays a painted portrait of a young woman with a basket of flowers. Estimate: $1,000-$1,500.

Additional jewelry highlights include a yellow gold pin with a 1.5-carat center diamond and six additional diamonds of 60 points each, est. $3,000-$4,000; and a Victorian engagement ring with a 1.66-carat solitaire diamond in filigreed platinum setting.

Within the grouping of gold men’s and ladies’ pocket watches is a Swiss 18K example with guilloche background and the portrait of a beautiful lady with four diamonds across the crown of her hair. Est. $2,500-$3,500.

A gleaming selection of silver is led by a 7-piece Dominick & Haff repousse and floral-engraved sterling tea set that was the consignor’s grandmother’s wedding set in 1908. Retailed by Bailey, Banks & Biddle, the set has a total weight of 370 ozt., with the massive tray weighing in at 170 ozt. Auctioneer Bunch speculates the “melt” value of the set to be $11,000 to $12,000 but hopes it will be purchased by an antiques collector.

Also to be auctioned are sterling silver serving pieces and souvenir spoons; and two outstanding pieces of American silverplate by Simpson Hall & Miller. A 24-inch double-armed enameled bride’s basket with colored satin-glass inserts is estimated at $2,500-$3,500; while a circa-1880 tilting water pitcher on a trolley could fetch $800-$1,200.

The star lot amongst the fine French furniture is a monumental Louis XV-style 2-drawer kingwood commode with mounted bronze ladies on the top corners and richly decorative ormolu on the ends and door front. Described by William Bunch as “the best piece of Continental furniture in the sale,” it is estimated at $10,000-$20,000. Other noteworthy furniture lots include a pair of small Regency breakfronts with floral-and-urn inlay, a Chippendale block-foot card table and a Chester County dish-top birdcage candlestand.

A stellar oil-on-canvas portrait of statesman Daniel Webster (1782-1852) is attributed to Chester Harding (American, 1792-1866), who painted U.S. presidents and European royalty. “Daniel Webster is known to have been a favorite subject of Harding’s. One of his Webster portraits went to the Bar Association of New York,” Bunch said.

Other artworks include a Louis Kronberg (American, 1872-1965) pastel of a ballerina, a Mihaly Munkacsy (Hungarian, 1844-1900) tabletop still life, and two original oils by Louis Icart. In addition, there will be 20 lots of 1990s works on paper from the estate of a Philadelphia man who worked in a Florida print atelier. Many very collectible late-20th-century listed artists are represented, including Rauschenberg, Scharf and Rosenquist.

Estimated at $6,000-$12,000, a 19th-century signed Aristide Petrilli alabaster lamp with relief-carved shade has an desert oasis theme, with camels, palm trees, ladies and other figures. Another exceptional artwork is the Gerdago enameled and silvered-bronze Art Deco dancer with ivory hands and face. Standing 11 inches high inclusive of green alabaster base, the sculpture is estimated at $10,000-$15,000. The sale also features a Franz Bergmann Vienna bronze of an Arab slave trader presenting a nude woman, and a 15½-inch Antoine Barye bronze of wild dogs attacking a boar.

The Oct. 4 auction will commence at 12 noon Eastern time. All forms of bidding will be available, including live in the gallery, absentee, by phone or live via the Internet through LiveAuctioneers.com. For additional information, call 610-558-1800 or e-mail info@williambunchauctions.com. 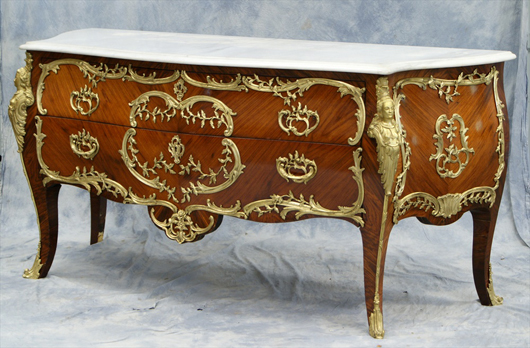 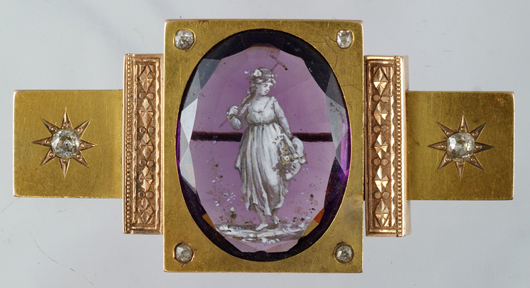 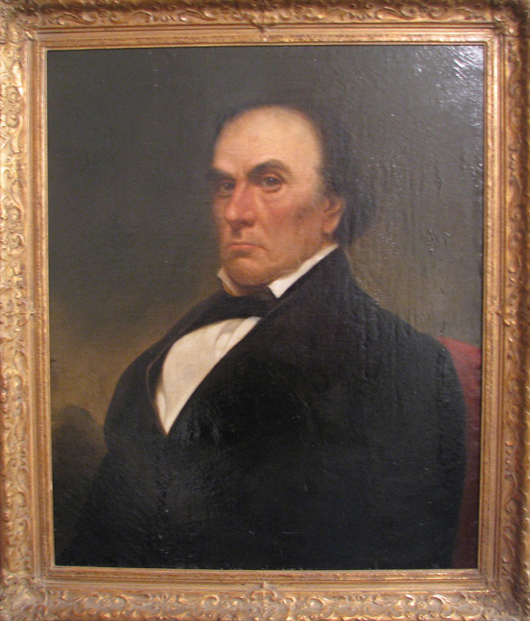 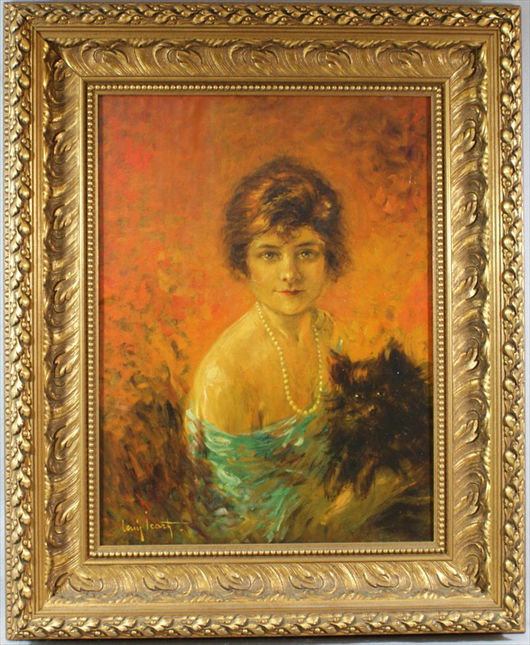 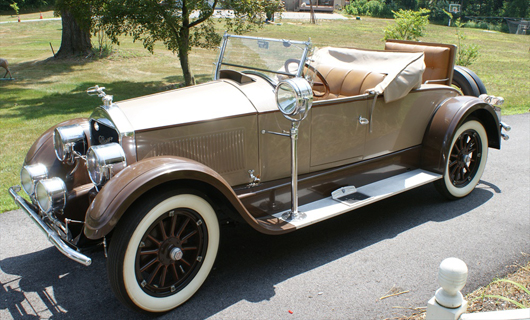 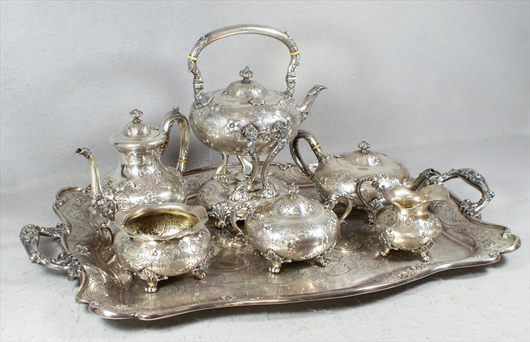 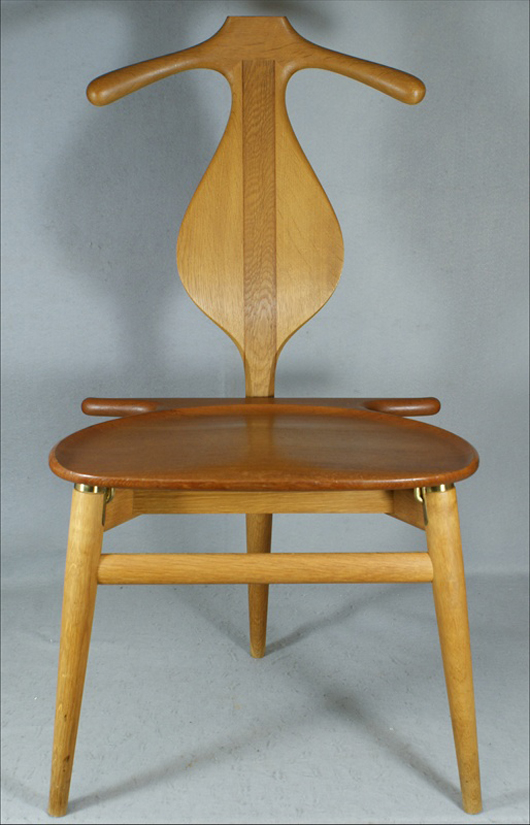